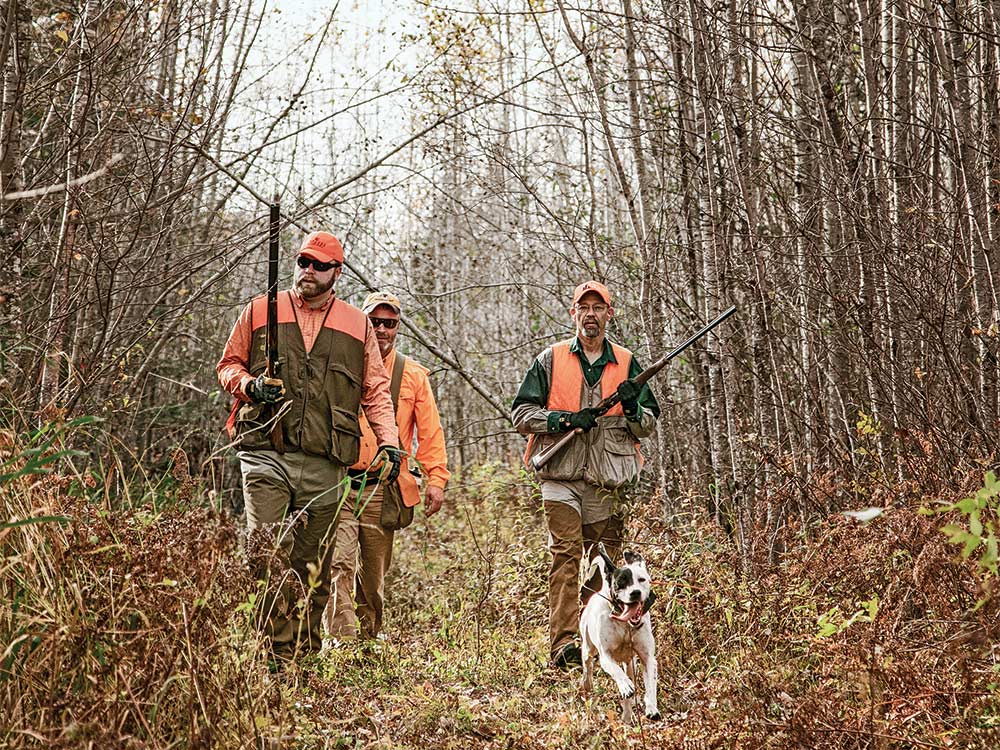 Words fail guide Paul Jaeger when the grouse blasts off. “AAUGH!” he screams. I think he’s fallen into a hole until he adds “grouse!” and I glimpse a fleeting gray blur zipping through the woods. It’s day two of the Ruffed Grouse Society’s National Hunt near Grand Rapids, Minnesota, and Jaeger’s hard-working Gordon setters have finally found us a ruff. But like so many others, this one escapes without a single shot being fired. The ruffed grouse’s explosive flight unnerves even seasoned hunters like Jaeger. And, setting aside the fine doubles and pipe smoke for a moment, it is Everyman’s gamebird, found on land open to the public across the United States. That combination of excitement and accessibility makes the ruffed grouse a national treasure—but this treasure is in deep trouble.

Last year, Indiana listed the ruffed grouse as endangered. A state listing isn’t as strong as the federal designation, but it’s still a full-on SOS, with distress flares. The ship appears to be sinking, and not just in Indiana. Eighteen northeastern, Midwestern, and southeastern states list the ruffed grouse as a “species of greatest conservation need,” and the problem is the same in every case: As forests mature, they become deserts for grouse, devoid of berries and buds to eat and thick cover in which to hide.

Maybe the endangered listing is the kick in the pants we need. “I’ve gotten more calls about grouse in the six months since it was listed than ever before,” says Indiana DNR biologist Steve Backs, “and I’ve been raising red flags for 30 years.” Backs saw the crisis coming in the mid-1980s, when the state and the U.S. Forest Service stopped cutting trees on their respective holdings.

The solution is simple, he says: Clear-cutting small patches of timber every few years creates mixed age classes of trees, just what grouse need. Unfortunately, the public has a visceral reaction to cutting trees, which fuels a well-funded and organized opposition. “Clear-cutting is a dirty word,” Backs says. “People like to save mature trees and think they’re doing something for wildlife.”

This wouldn’t be a problem if natural disturbances were sufficient to regenerate forests. But we suppress fires, and the winds and tornadoes that take down mature trees can’t be relied upon to hit our fragmented forests where they’ll do the most good. “It’s our responsibility to mimic those natural disturbances,” Backs says. “Cutting is the best way to do it.”

Forests without grouse are hard to contemplate, but myriad other species depend on young forests too. Nighthawks, woodcock, wild turkeys, and many songbirds such as the golden winged warbler have seen sharp decreases in population in recent years. Backs suggests that with fewer people hunting today, we may need to change the message. Some birding groups are now realizing that their species counts go up when some trees come down. “It has always been our mantra that if you manage for game species, non-game species benefit too,” he says. “Maybe we need to manage for non-game and let game benefit.”

Even in the ruffed grouse’s stronghold, the Great Lakes states, something is not right. Minnesota boasts huge holdings of national, state, and county forests rich in aspen that make great grouse woods, and much of the land is actively logged. Yet Minnesota DNR forest gamebird coordinator Ted Dick says, “I’ve been hunting grouse for 40 years, and these last two seasons were my worst.”

Dick points out that since 2000, Minnesota has had significantly less snow than it used to get. Grouse burrow in snow to roost in the winter, finding protection from both predators and cold winds. But when snow isn’t deep enough for roosting, grouse suffer. “If all you do is whitewash the ground with snow, grouse can’t burrow, and they now stand out to predators,” Dick says.

He worries about forest diversity too. Demand for timber is cyclic on private land, and the state makes up for low-­demand periods with increased cutting on its holdings. Lately it’s been cutting more. Dick is concerned that sometime in the future, the state may wind up with a deficit of older forest rather than a healthy mix.

Having absorbed giant doses of pessimism from Backs and Dick, I called Ben Jones, CEO of the Ruffed Grouse Society. I asked first about West Nile virus, which has decimated Pennsylvania grouse populations and been seen in the Great Lakes states, where hunters have reported finding sick, underweight grouse the past two seasons. Jones says that while West Nile is a real danger, it’s not the real danger. Disease happens in nature. Popu­lations recover if they have good habitat. In Pennsylvania, populations in marginal areas haven’t recovered, while grouse in healthy forests have. So, no matter what the question, better habitat is usually the answer.

That message, long preached by the RGS, is gaining traction, Jones says. Cornell’s Ornithology Lab, the American Bird Congress, the Nature Conservancy, the Minnesota Deer Hunters Association, and others are beginning to publicize the importance of forest diversity. Still, divisions remain. “The various natural-resources advocacy groups are 90 percent in agreement,” Jones says. “I feel like we could all have a parade, but then you mention cutting trees, and both sides run to their corners and get ready to duke it out.”

I asked him if he could leave me with a positive thought. “Nope,” he says. “People need to stress over this. We need a flap.” Jones believes we’re at a moment of genuine crisis with only one parallel in our history. “The first wave of conservationists in the United States, around the turn of the 19th century, saw species wiped out. They responded to widespread habitat loss and market hunting,” he says. “We are the second wave. We may see grouse and other young forest species disappear in a lifetime. This problem is real, and it won’t fix itself.”

Toward the end of my Minnesota hunt, Jaeger leads us into a family group of birds, and after a long day with little action, grouse are everywhere. My partner, Jon Zinnel, and I scratch down a bird together, and he drops another when a bird flushes underfoot. A little while later, Jaeger screams again. I look up to see a grouse presenting a rare, clear shot—a 25-yard crosser I could make in my sleep. So I think, anyway, until my gun barrels slam into a tree, and I watch the bird disappear.

Jaeger, now beside me and no longer at a loss for words, says, “Like any great entertainer, they leave you wanting more!”

We do want more, and although it is time to stress about grouse, merely stressing is not enough. We have to roll up our sleeves, fire up our chainsaws, raise our voices, and work to make sure we aren’t witnessing the great entertainer’s final curtain.

Read Next: A Photo Tribute to Man’s Best Friend

CZ has reintroducted its popular Bobwhite, a simple, two-trigger, straight-gripped double gun with extractors that’s a breeze to carry, at under 6 pounds, and easy to pay for too. The new G2 version has upgraded springs, a one-piece receiver, and a durable black chrome finish. The 28-inch chrome-lined barrels come with five choke tubes, and the gun is steel-­compatible. The best part? It sells for just $655 in 12 and 20, and about $700 in 28-gauge.