Take your camp snacks to the next level with these inventive, and delicious, twists on an old favorite 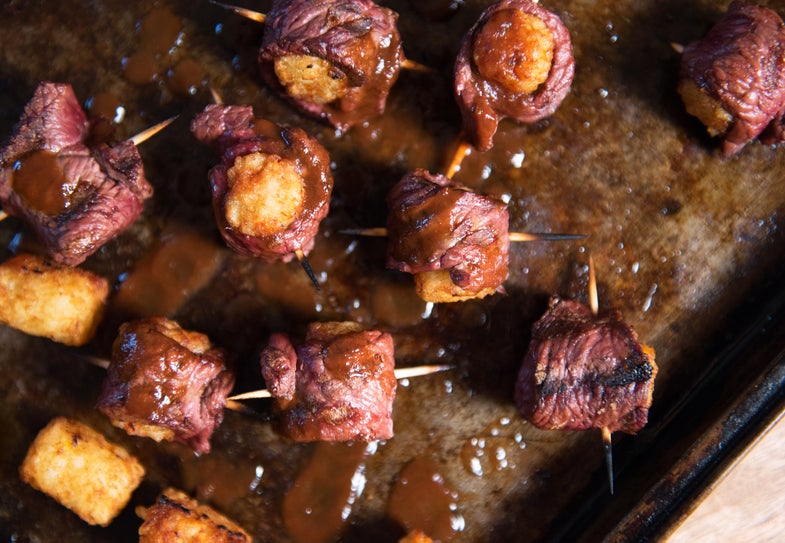 The jalapeño popper—a combination of pepper, cream cheese, and bacon—is a hunting-camp (and tailgate) classic. With either a slice of duck or dove breast, it’s the best way to introduce the uninitiated to just how delicious wild game can be. Still, as good as the go-to popper is, it’s easy to get stuck in a rut. To take your popper game to the next level, here are seven inventive (and relatively easy) recipes for preparing the bite-sized flavor bombs, from a simple steak-and-potato combo to a surf-and-turf special. 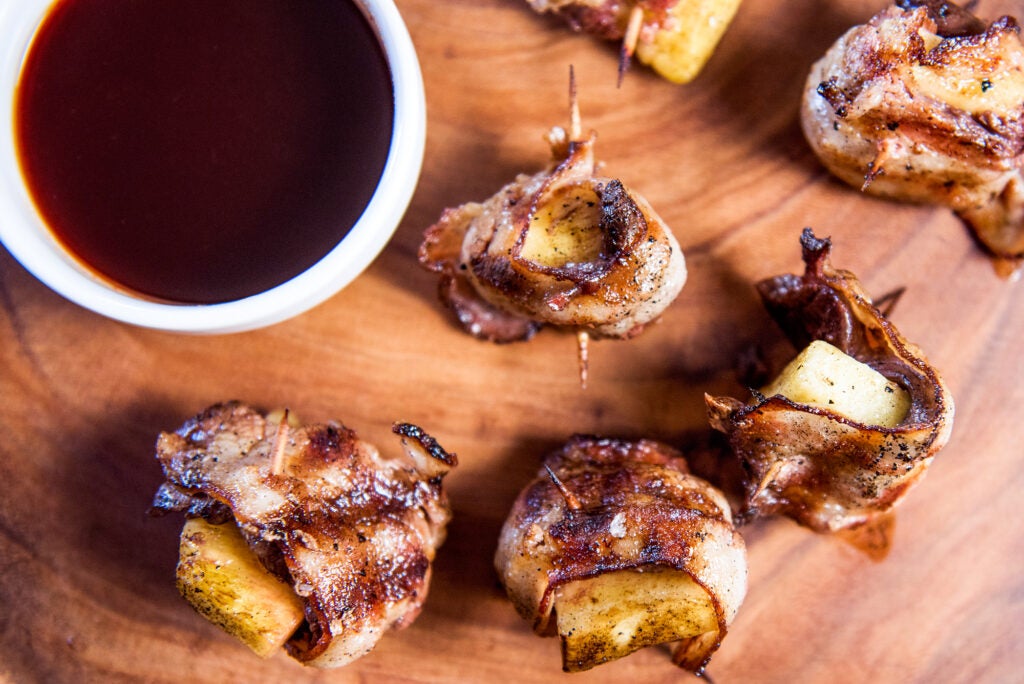 This tropical take on traditional duck poppers trades the bite of jalapeño for the sweet tang of pineapple. But don’t worry: there’s still kick to this Hawaiian variation, thanks to a sweet and spicy dipping sauce, which combines the fiery heat of Sriracha with a healthy dose of honey.

1 Tbsp. Sriracha, or to taste

Juice of one lime 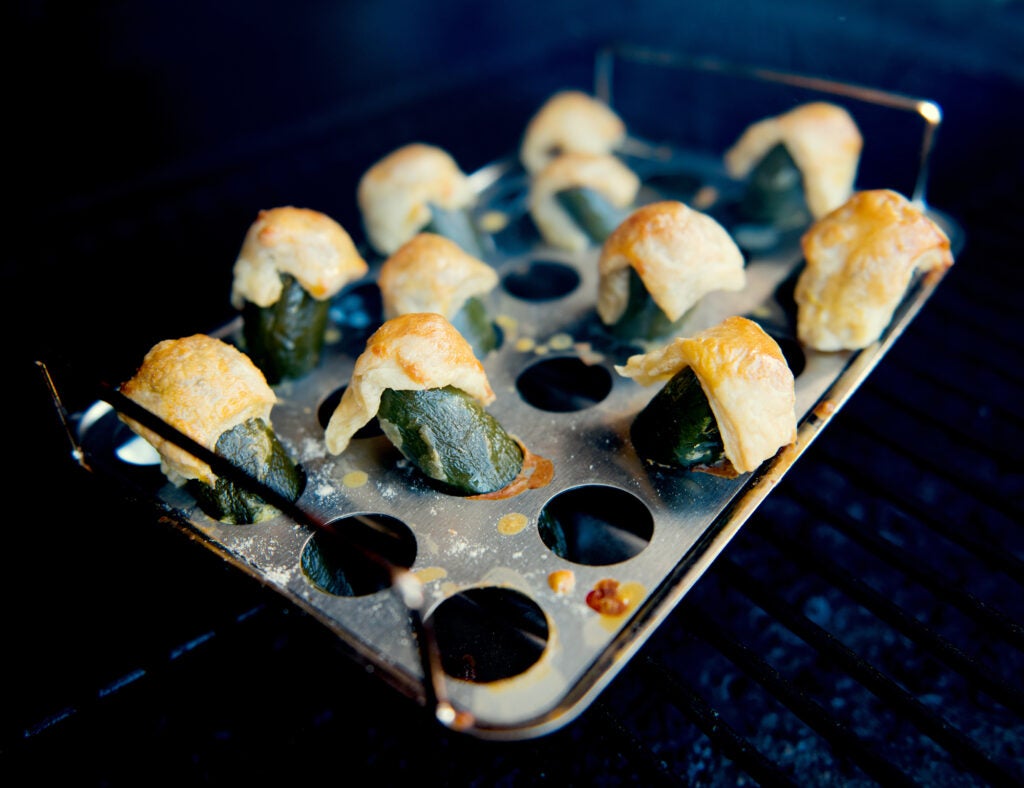 Ready for a little heat?

These big poppers double down on the heat with the earthy spice of elk chorizo and the kick of jalapeño. Luckily, the cheese filling helps cool things down a bit. The puff pastry is, I admit, really just gilding the lily, although it does keep the filling from bubbling out, and adds a nice crunch. (You can find the elk-chorizo recipe here.) 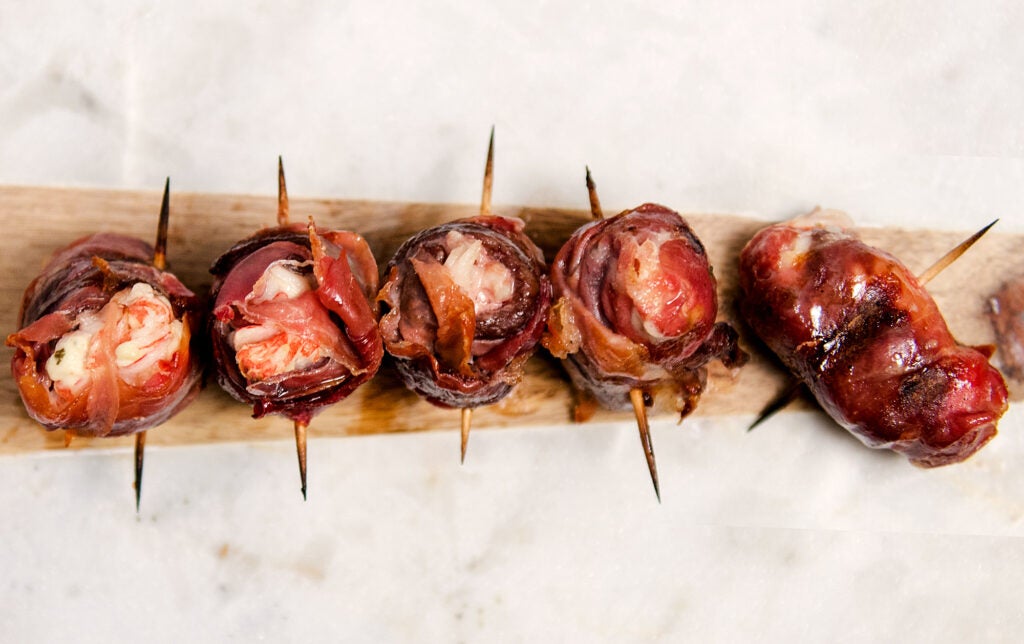 A bit of seafood for your deer-camp menu.

You might get accused of out-classing your campmates with this fancy finger food, but once your buddies take a bite, they’ll quit complaining. Creamy and briny with a hard hit of garlic, this surf-and-turf take on the humble popper is exceedingly rich. The prosciutto ups the salt-level, so season the poppers lightly, with just a dusting of black pepper. 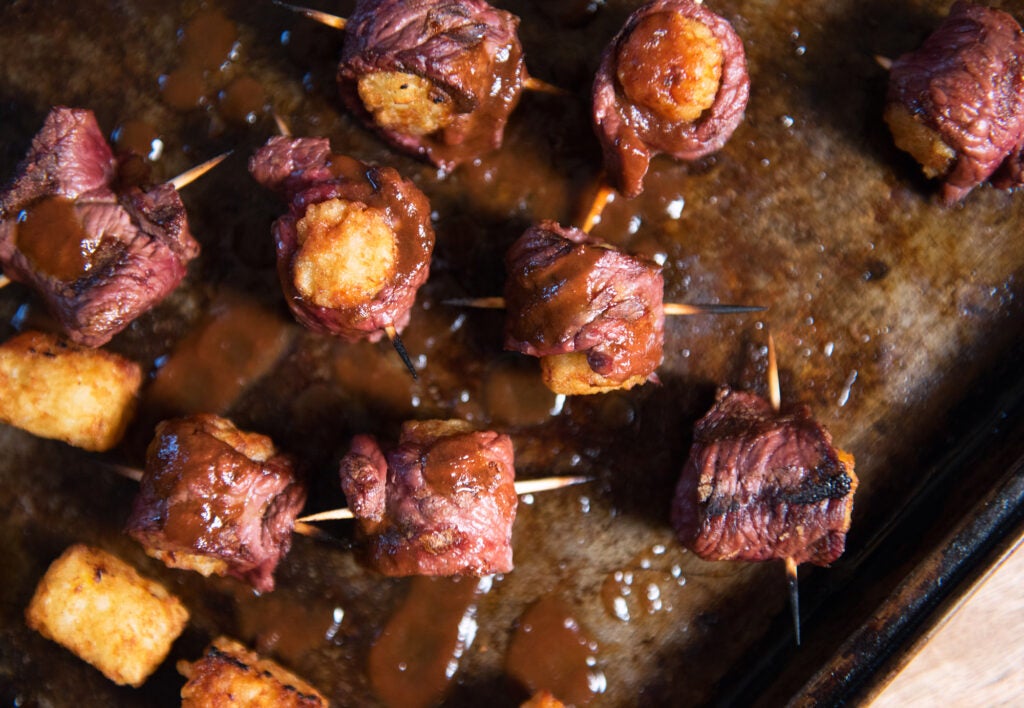 Steak and potatoes are an All-American Meal—and especially so when the meat is a fresh chunk of whitetail venison. (Though feel free to use mule deer, elk, moose, or even antelope.) These poppers come together quickly and cook fast. If you’re feeling particularly ambitious, skip the bottled sauce and whip up a homemade recipe that tastes as if it comes straight from a downtown steakhouse. 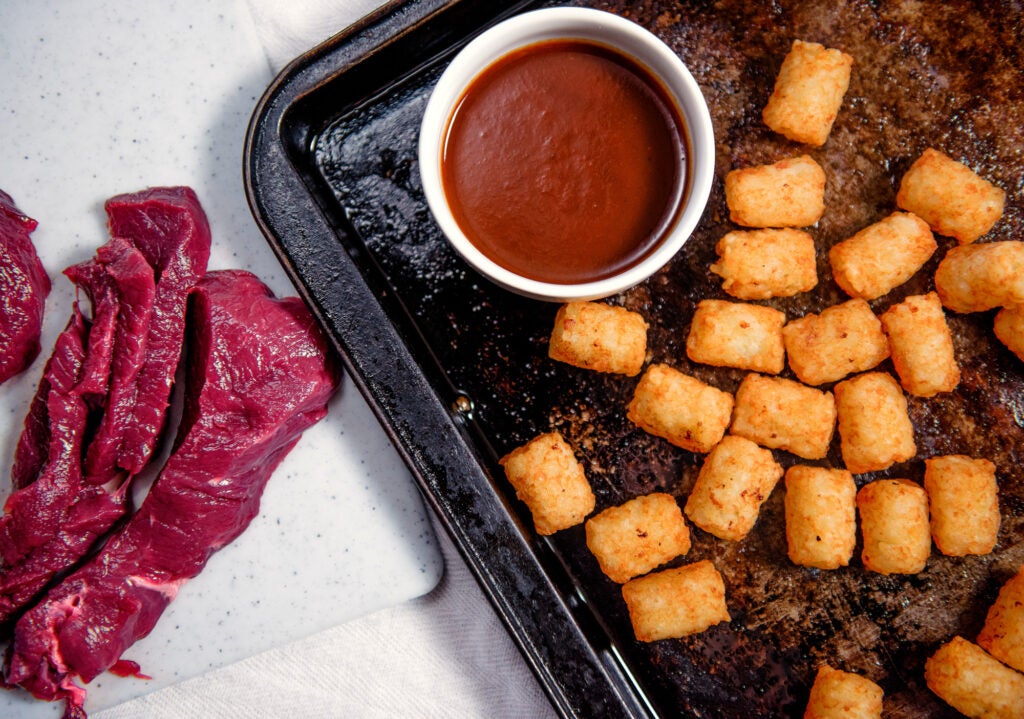 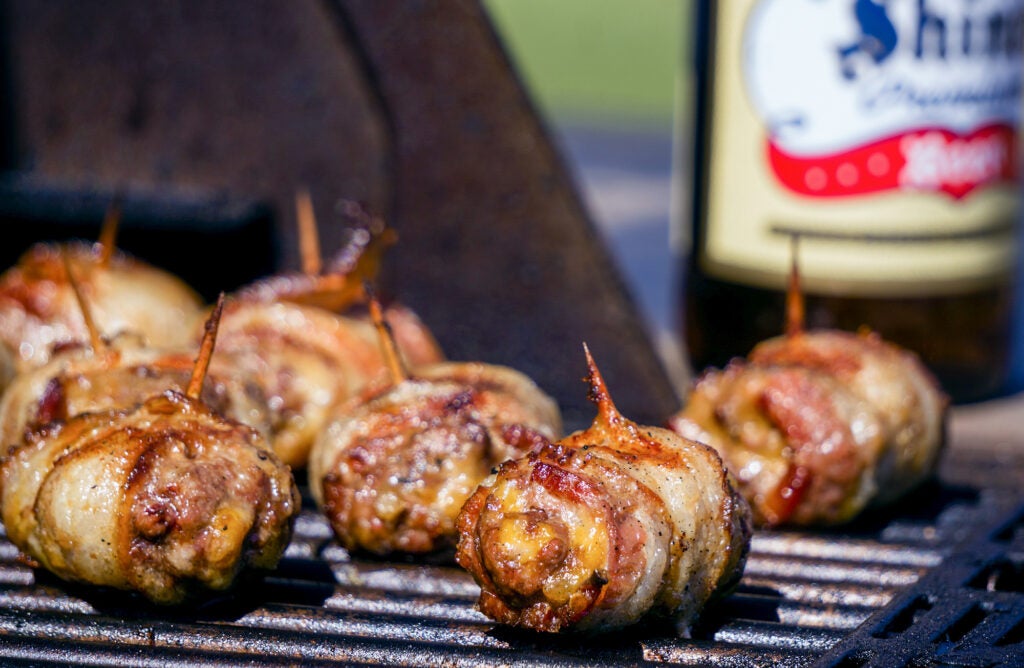 Bacon is never a bad idea.

You’d be hard pressed to dislike a miniature burger dripping with cheddar and wrapped in crisp bacon. Without the bulk of a bun, these poppers leave room in your stomach to pop a dozen or two of them. If you think no popper is complete with a jalapeño, feel free to add a ring of pickled peppers as you wrap them up. 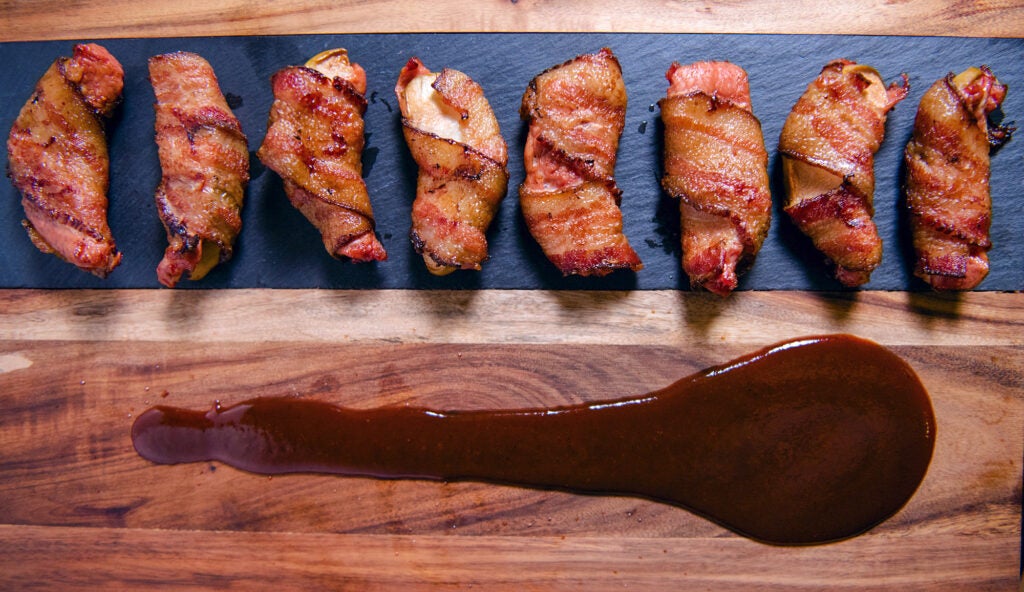 Homemade barbecue sauce can take this recipe to the next level.

Wild pigs and green apples go together like smoke and barbecue, and they give these poppers a flavor straight from south of the Mason–Dixon line. The bacon protects the thin pork medallions from drying out during the extended cook time. For dip, leave the bottled BBQ sauce on the shelf and try a version inspired by Kansas City Barbeque Society recipe instead. 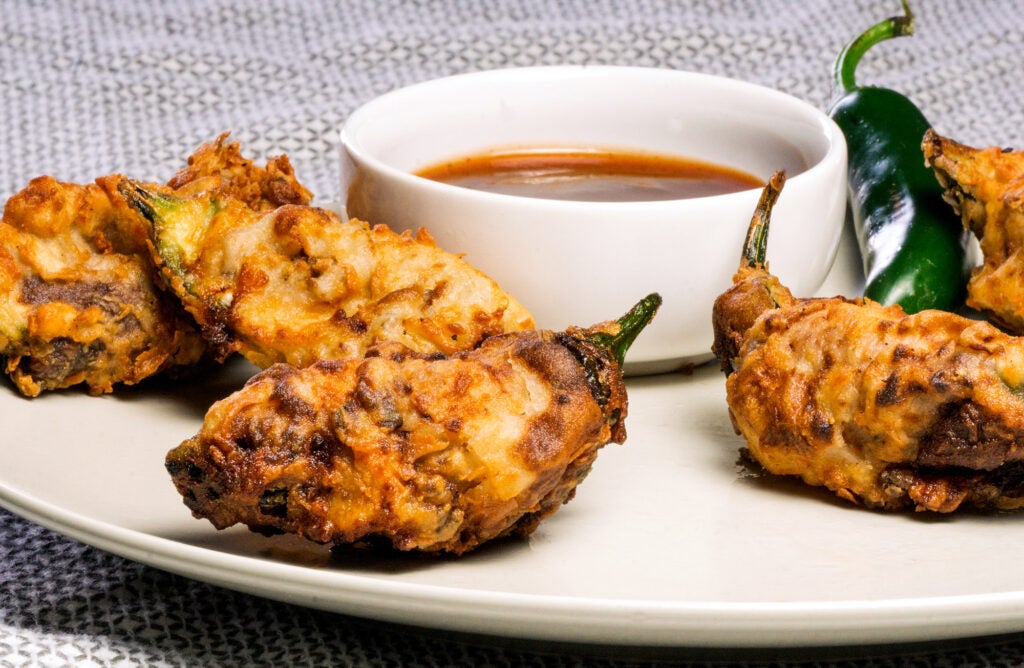 A classic popper with a crispy buttermilk coating.

These little bursts of flavor deliver on the classic popper taste with the added bonus of a satisfying crunch via a crispy buttermilk coating. Though this recipe will make about two-dozen poppers, think about doubling it, since they tend to disappear quickly.