Shooting Lessons from a Limit of Woodcock

Woodcock are wonderful, odd birds, and a lot of fun to hunt. They are also good shotgun teachers. They are... 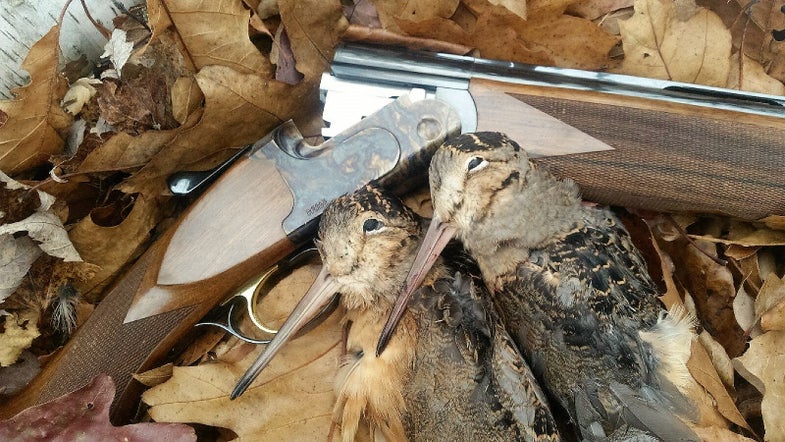 A pair of woodcock taken during a hunt in Wisconsin. Phil Bourjaily
SHARE

Woodcock are wonderful, odd birds, and a lot of fun to hunt. They are also good shotgun teachers. They are slow fliers. As near as I can find online, the consensus is that they fly 28 mph, which is about what I would guess. But they bob and weave through the thickets like little knuckleballs, and a lot of shotgun ammunition is expended in their general direction, often to no good result.

I re-learned a few lessons about woodcock on my trip to Wisconsin two weeks ago. First, I learned that Muck Boots do you no good in swampy cover if you leave them in the motel room. I had to hunt in low-cut Merrill hikers and my feet were soaked five minutes into the hunt and stayed that way all day. On the plus side, the locals were complaining about their heavy rubber boots while my feet were unencumbered, if prune-like, by the end of the hunt. My feet were wet but my legs stayed fresh. Fortunately, it was not a cold day.

Second, and more germane to this blog, woodcock teach patience with a shotgun. They flush close and fly slowly. You have more time to shoot than you think you do. Ten years ago, last time I hunted woodcock, three of us were standing together taking a break and chatting when a random woodcock flushed. Sporting clays shooter Andy Duffy was with us, and he had time to close his gun, take two giant steps to one side to save our eardrums and still shoot the bird in easy range. In general, giving a woodcock time to get up out of the branches and into the open above the canopy usually results in a better shot anyway. I shot the first of my limit of three woodcock backing up one of the locals, who walked in to flush a pointed bird and wasted both his shots right away as the woodcock was bobbing around trying to find a way up and out of the thicket. I let him finish shooting, by which time the bird was up and above the canopy and an easy shot for me.

Woodcock teach the futility of aiming a shotgun and the importance of trust and of letting your subconscious call the shots. Give your subconscious targeting computer its head and you can make shots you would otherwise screw up with over-thinking. All you need to do is keep your eyes on the bird, not the gun, and your eyes and hands will make little corrections you’re not even aware you’re making.

For instance, someone flushed the second bird I shot while I was standing near the edge of a trail, and I got a rare, clear chance at the bird as it flew across the trail opening. It was a crossing shot, and I had to swing through the bird, as it caught me by surprise. Just as I was about to pull the trigger I thought “Oh no, I’m behind this one,” to which my subconscious mind replied, “Shut up and pull the trigger” which I did, and the bird folded up dead. The third bird sat tight in front of the dog in a pine thicket. It flushed straightaway, but dipped erratically as it went. I mounted the gun and my cautious, conscious mind said “You’re to the left of that one.” Having long since learned to ignore that voice, I pulled the trigger and killed the bird anyway. Let your eyes and hands do the work of shooting. They are really good at it. Besides, your conscious mind has other things to think about, like remembering your rubber boots.