Our shotguns expert shares his thoughts on Browning’s inertia shotgun 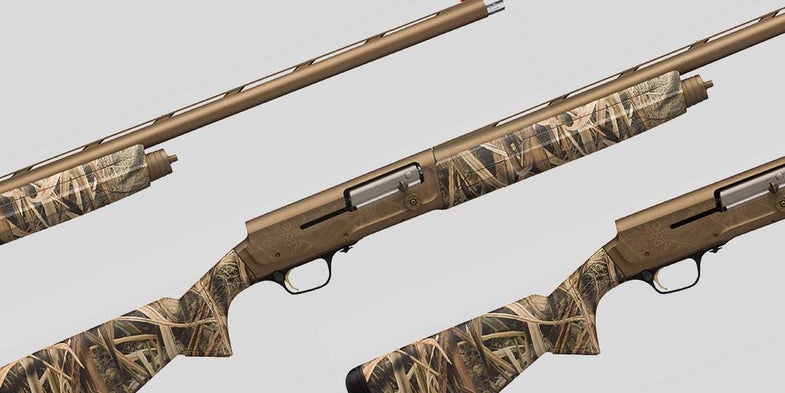 Last week’s post about Scotch doubles included a picture of the Browning Wicked Wing A5, and I was remiss not to say a few words about it. The A5 is Browning’s inertia gun. It shares the squared-off receiver of the original Auto 5 and a couple of its features (“speed loading” and a magazine cutoff), but in all other ways it’s a different gun. And, as much I like Auto 5s—I started out shooting one—the new A5 deserves to be judged on its own merits, of which it has many.

It’s a trim gun, which makes it easy to shoot well. Inertia guns, having no gas system up front, can have slim forends that let the gun sit low in your hands and point naturally. Out of the box, without fooling with stock-fit shims, the A5 centered 5 stand targets for me the first time I shot it, and it’s been no different on ducks and geese.

The shell release button is big and easy to find in front of the trigger guard. And the magazine spring, unlike many, is soft enough that it’s easy to shove shells into the magazine even with cold, numb thumbs, yet the gun still feeds reliably. The trigger pull is a clean 7 pounds, which may bother you but doesn’t bother me in the least. The safety button is large and, like the safeties of the Gold and Maxus, is extremely easy to reverse if you’re left-handed.

All in all, it’s a highly practical, reliable duck gun. I took it on the Etruscan double hunt because it was a cold and snowy morning, I had a lot of walking and decoy-hauling to do, and I didn’t want to put out all that effort only to have gun problems. And I didn’t have any. Everything I shot at, except the dove that tried land near my blind, hit the water or the ice completely dead. The dove was merely frightened.

One of the biggest differences between the A5 and the old Auto 5 is weight. My “Light 12” Belgian Auto 5 weighed 8 pounds. The 3 ½-inch A5 has an alloy receiver and weighs just 6 ¾ pounds. That’s all well and good until you chamber a 3 ½ inch shell. I don’t know which kicks harder with 3 1/2s—the A5 or the Benelli Super Vinci—but both are awful. Not just stout, the way 3 1/2s are in other guns, but awful. Feed the A5 a sensible diet of 2 ¾ and 3 inch shells, however, and it’s everything you want in a duck gun.

The version I’ve been shooting is the Wicked Wing, which comes with a camo stock and forend, a weather-proof Cerakote finish on the metal, an enlarged bolt release, and extended choke tubes engraved to look like goose bands. It’s an eye-catching gun for sure, even to me, who prefers blue steel and walnut on my shotguns. Cerakote is a tough and rust resistant finish that helps make this an easy gun to care for.

The 3 ½-inch Wicked Wing sells for $1,999. I have complained about the high price of plastic stocked semiautos in the past, and I realize part of the problem is me, whose ideas of what a gun should cost were formed circa 1982. According to internet inflation calculators, $1,999 translates in $762 in 1982, which puts the price in a little better perspective for me. Even so, if I were buying an A5, and I am tempted to, I’d skip the undeniably cool looks of the Wicked Wing pattern and the 3 ½ chamber, and pick up a basic black 3-inch gun for $1,539, which would have been about $587 in 1982.