The End of Duck Season Just Got Easier to Swallow

Toasting the end of waterfowl season with a special dinner 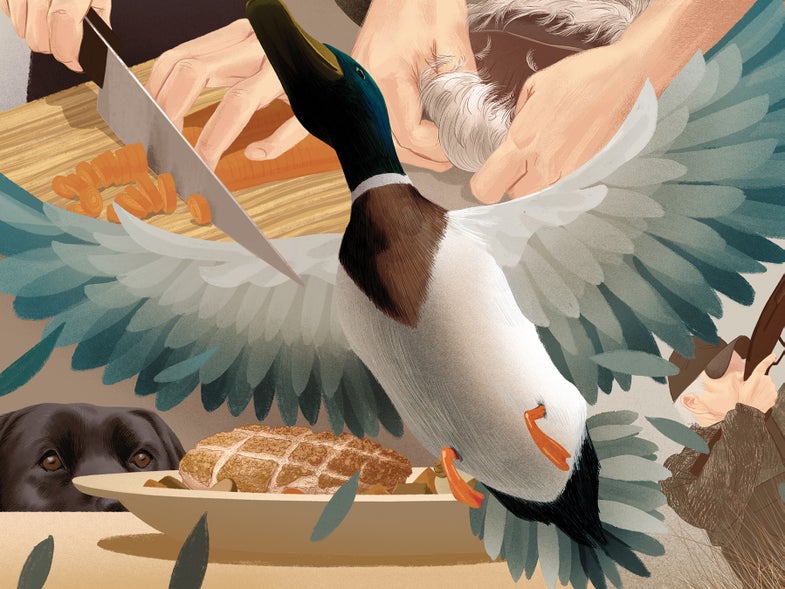 I drum my fingers on top of the open freezer door. A lot of choices this time of year: venison, goose, duck, grouse, wahoo, tuna. There’s also the wild pig from nearly a year ago, or the freezer-burned squirrel that I can’t bring myself to toss. I’ll figure out something to do with it, but not for this meal. It’s just the two of us. I need simple.

I rifle through the freezer bags, searching for something small that will thaw in an hour or two. One bag catches my eye like an ace in a card deck. It’s marked with Sharpie ink: Mallard/Black X 3. Look no further. That’s the one. Man, that was a hunt.

I can’t guess at how many duck breasts I’ve cooked over the years—grilled, pan-­sautéed, braised, barbecued, jerked. I do pluck a few ducks, but it’s so much easier to fillet the skinless breasts. It takes but seconds: Push back the feathered skin with hard thumb pressure, and slice away the meat. That was always the MO.

Then I picked up a copy of Hank Shaw’s Duck, Duck, Goose, in which the ­California-​based game chef details his manner of pan-searing a skin-on duck breast. The instructions run a full two pages. At first I thought Shaw’s process was a smidge overwrought, but I’d tried other recipes from the book and every one was a winner. And I’m no stranger to putting on airs. I have my ways. For years I’ve cleaned my gamebirds with the same knife, a ridiculously fancy Forge de Laguiole folder. I use my grandmother-in-law’s cast-iron skillet. I mix my butter with a dab of bacon fat spooned from a Mount Olive pickle jar I’ve kept for 25 years. It seasons the experience, I suspect, more than the meat.

So, one day last year, I followed Shaw’s instructions to the letter. They’re not complicated. First you score the skin with a sharp blade, salt well, and let the breasts set for up to an hour. This pulls moisture from the skin. Right before cooking, you scrape the skin with the spine of a knife, and pat away the excess moisture with a paper towel. Putting the breasts in the pan skin side down, you press them lightly with a spatula to render the fat and crisp the skin. When you flip the breasts, you salt the skin again to absorb more moisture and crisp the skin even more. Out of the pan, the duck breasts are tented with foil and rested, then served on whatever sauce suits your fancy.

I thought myself a decent duck cook till I signed on to the Shaw method. Crunchy duck skin, hot duck fat, rich duck meat. I have yet to find a finer antidote to the depression of a duck season two months past.

So I dropped the freezer bag in cold water, and pulled the old pickle jar from the fridge.

These black ducks came in a fog so dense we couldn’t see the treetops. Rain drummed on our jackets. Jack and Minnie were hunkered down on a beaver dam, while I covered the pond 20 yards behind. There’s a one-bird limit on black ducks, and after Jack felled the first one we had to double our vigilance. Black ducks can come through my neck of the woods in waves, and in poor light it’s no small task to tell them apart from a mallard hen. So we held our fire until the skies lightened, and still the mallards and wood ducks appeared.

Minnie was staunch as a bird dog on that beaver dam. She never broke. She brought back every duck. We hunted through dumping rain and shifting banks of fog, hour after hour. We had as much fun that morning, I believe, as on any other duck hunt we’ve shared. You had to be duck-crazy to be out in that mess, and we were alone in the swamp and Minnie was on fire and the birds were close and willing. When Jack and I left the swamp, we both knew we had experienced something special.

I finish cooking, call out, “Soup’s on,” and pull out two chairs.

That’s another plus to Shaw’s recipe: It takes less than seven minutes to turn a duck breast into a meal. I spoon roasted-onion chutney onto the plate, and make a simple blessing.

“Here you go, girl,” I say. “Too bad Jack’s in school. But you deserve this as much as either of us.”

Minnie sniffs once, then pulls the meat off the fork, her teeth clicking metal. She has dark, inscrutable eyes, which makes it hard to figure out what she’s thinking. It might be that all she cares about is the next forkful of dark meat headed her way, but I want to believe that at least a part of that canine brain recalls fog and rain and falling birds—and her two hunting pals pounding each other on the back over a pair of dark ducks.

She sits at my side like she sat on that beaver dam, tail thumping every time she sees the duck coming her way. She and I trade bites for 10 minutes. Three duck breasts, down the hatches.

I let Minnie lick the plate clean, which she does with such ardor that she drives the plate across the kitchen floor into a far corner. She’s still hard at it when I lean over to pick up the dish—so shiny that I can see our faces reflected in the sheen, one beside the other, each of us looking back.

In early spring, many ducks are headed back north, so bone up on the differences between mallard hens and black ducks with high-quality binoculars like the Maven B1 or compact B3 in 10X ­(maven​built.com). The brilliant blue wing patch on hen mallards has a white border that’s lacking in the black duck. And the body feathers on a hen mallard all sport dark semicircular bands, whereas a black duck’s body feathers are almost entirely dark brown, with thin buffy outer edges. —T.E.N.

This article appears in the Feb./March 2017 issue with the headline “Happy Meal.”