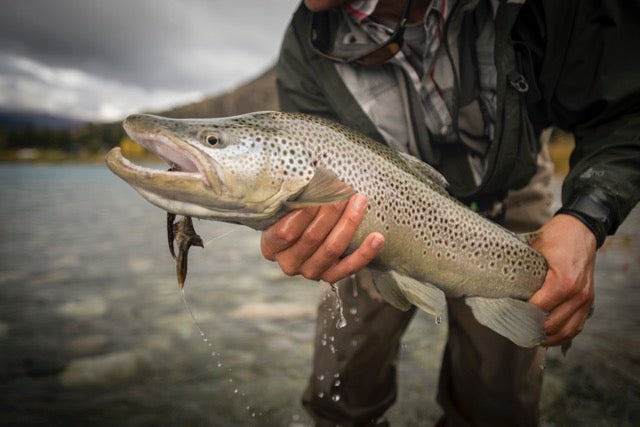 A lot of anglers hang up their gear each fall and don’t break it out again until after winter thaws. But in doing this, they miss out on some of the year’s best fishing. There are plenty of reasons why you shouldn’t forsake your favorite honey hole once the temperature begins to drop. For one, the crowds thin out dramatically, so you don’t have to fight for a spot around prime pools. Not only that, but fish have their feed bags on, so the right pattern can produce big results. Plus, it’s just a glorious time to be outside. So, while everyone else chases deer or crowds into duck blinds, here are six tips to help you score big trout this autumn.

As the days get shorter and colder, the sun will throw shadows farther than it would in, say, the middle of summer. Be mindful of this when approaching the water, since fish know that death comes from above, and shadows can tip them off to you. While wade fishing, crouch or kneel on the bank if you can, and cast from far away, keeping a healthy distance between you and the fish. Likewise, when in a boat, maintain a good distance from sighted or rising fish.

It’s time to think hard about your clothing, too. Since streams are usually low and clear, fish can be extra sensitive to flashy bright colors, so you’ll want to blend in with your surroundings as best as possible. Muted apparel is a good call.

2. It’s All About Water Temp

Throughout much of the year, the best bites come early or late in the day. This is certainly true in the dead of summer—but in the fall, getting out of bed later and calling it a day a little earlier can serve you well. In the morning, fish won’t start chasing bugs until the water temps rise a bit, which will be later in the morning than it would in summer or spring. Moreover, the fishing can turn off late in the day once the water dips into the 40s and 30s, so if productivity hits a wall, consider heading home to save your energy to try again another day.

Trout like to bulk up toward the end of the season, and brown trout, in particular, are infamous for turning super aggressive. Streamers are key during this period. Here are few tips for slinging the heavy flies:

A. Use patterns with some orange flare. There’s a reason why the Autumn Splendor has been a go-to fall streamer for years.

B. Go bigger than you think you should. Big flies typically yield fewer but larger fish than smaller patterns would.

C. Fluorocarbon is your friend—it sinks and it’s as tough as nails.

D. Stay out of the water as much as possible and work close to the bank, then work toward open water if wade fishing.

4. But Don’t Forget About Terrestrials

I’ve had many banner days with terrestrials, especially before the first super-hard frost. Terrestrial insects are important fish food, since they’re large and boast a lot of protein. They make for great probing flies when fishing for rising fish, so be sure to carry a few winged ants, beetles, and smallish grasshoppers in your fly box.

This tip may seem counterintuitive to some, since anglers typically strive for drag-free drifts when fishing dry flies or nymphs. The problem is, fall brings leaves, twigs, and wind-blown junk to the river. This junk clogs not only the surface, but also the many layers of the water column. Giving your fly a little twitch every now and then can grab a fish’s attention and help differentiate it from debris. Slow, short strips can coax big eats, too, and don’t be in a hurry to make a lot of fast casts. Well-placed, methodical casts are the name of the game.

Bonus Tip: Educate yourself on what a spawning bed, or redd, looks like. Targeting spawning fish is a super big no-no.

Since the water is usually low, clear, and slow in the fall, fish tend to get a little spooky. Long, thin leaders can help out tremendously, even though they can be harder to cast than thick ones. Try 12-foot leaders or longer when fish seem especially on edge. If you normally use 4X tippet, step down to 5X, and be mindful of your fly line and leader butt, since they can scare fall fish, too.