A Snow Goose Adventure in the Mississippi Delta 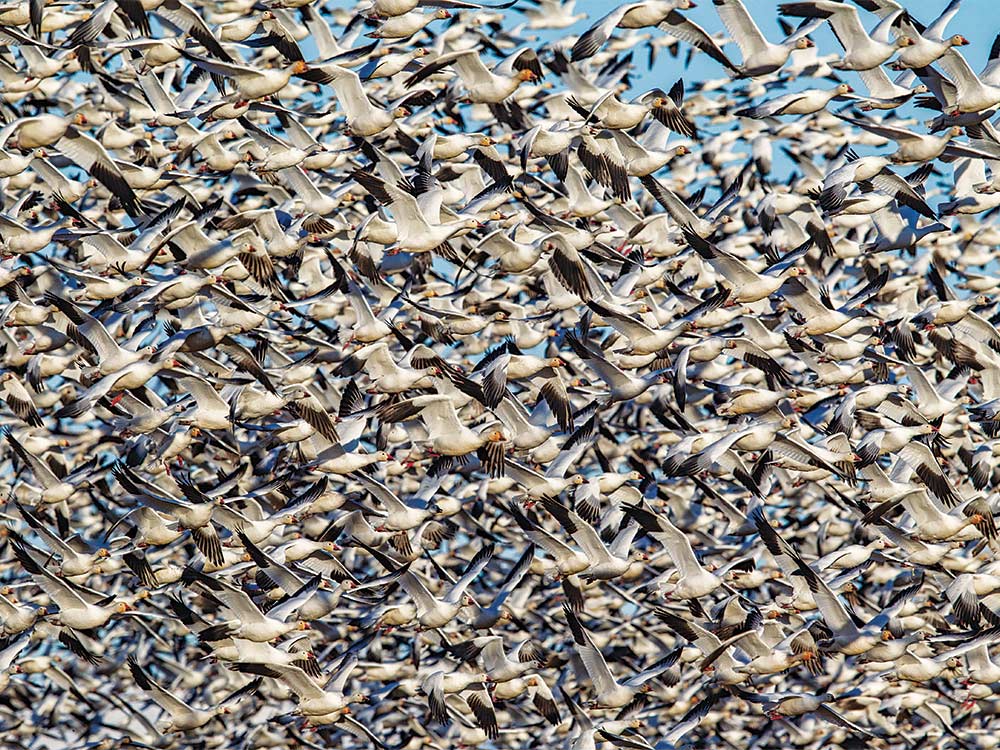 We haven’t been in the snow goose spread for 15 minutes before 50 birds materialize on the skyline. John Gordon grabs a small handheld e-caller and cranks up the volume. The birds cut a boomerang pattern in the sky back toward the sound. Dipping low, they make for the small opening in our full-body dekes, 10 yards in front of us, feet out, fully committed.

“Shoot ’em!” Gordon hollers. We pop up, and guns rip. Gordon triples while I flock-shoot my unplugged gun empty without hitting a bird.

I’ve hunted snows across the river in Arkansas and throughout the Northeast, but never have I seen them turn on a dime and instantly commit like that. Twenty more birds swing into our spread. Gordon’s old college buddy, Mark Henderson, knocks down two while I continue my missing streak. As we pick up for the evening, 800 to 1,000 birds truck north, flying over the clapboard church on the corner up the road. They land in a beanfield just out of sight. “We’ll see them in the morning,” Henderson says.

Rice cultivation along the Gulf Coast has declined dramatically in the last 30 years, according to Tom Moorman, chief scientist for Ducks Unlimited. With that decline, light geese have pushed their wintering ground east, into Arkansas and part of the Mis­sissippi Delta. Yet the spring goose-­hunting fever that started in Texas and has taken over Arkansas hasn’t yet crossed the river. “The hunting pressure there is light,” Moorman says, “but, man, are they still hard to kill.”

We’re back in the field by 10 the next morning, but the field birds from the night before never make an appearance. The Delta is dotted with mostly out-of-commission catfish ponds—a series of 3‑acre impoundments that roll on for miles. If you can get permission to hunt them—or any of the dormant ricefields that also mark the region—you just might have the best light goose hunt of your life. Mississippi is a snow goose secret, hard to get access to, but unpressured and exciting to hunt. We set up along the levee of an impoundment, running decoys down the slope and into the stagnant water.

Gordon leaves briefly to drive Henderson to his truck so Henderson could get back to work that afternoon. No sooner are they off the catfish impoundment when eight geese drop out of the clouds and make for our small pocket of standing water. Flying high, they take a look and pull off. I scramble for the e-caller two seats down. From 200 yards out, the birds make a U-turn, then sail into the kill zone on cupped wings. I shoot—and miss. The birds hook back again, undeterred and seemingly aware of just how bad I was shooting. Finally, one bird hits the deck.

We make a run to town and stop at the iconic Blue and White Restaurant in Tunica. The only guys in camo, we wait in line with the after-church crowd. If it were December, the whole place would’ve been filled with duck hunters. It’s clear how few locals hunt snows. “This place is as much a part of hunting Mississippi as the birds,” Gordon says. “Not that you’d know it today.”

Soon after we settle into the spread for the afternoon, a pair of light geese barrel toward us. I swing after them and knock them both down. Gordon jumps up from his seat. “I didn’t want to say anything,” he says running after the downed birds, “but those were Ross’s geese.”

“Seriously?” I had never shot one before. “How do they look?”

Read Next: How to Hunt Spring Snow Geese

“Little dirty,” Gordon says. He rolls the best bird around in his hand. “Juvie. Not bad, though.”

Sitting off the levee, watching the sky for more birds, I ask Gordon if my writing about this place would amp up the pressure. He just laughs. “It’s possible, but Mississippi is not exactly friendly to outsiders,” he says. “You’d need to spend time here. Understand the place. Understand the people.”

Watching the sun set on the skyline, over a landscape of closed-down fish farms, desolate ag fields, and roadside shacks with tin roofs, I think it might be worth putting in the time here. Then, as if on command, six geese peel off their route to look at our spread. Gordon hits the caller and they circle down from the fading sky.

Snow geese are hard to fool, so to improve your odds of bringing them in to your spread, invest in a few dozen ultrarealistic, full-body dekes. They add a realism to the spread that you just can’t get with socks and shells. The ones in the Pro-Grade Full Body Snow/Blue Harvester Pack are as good as full-bodies get, with adult and juvenile sizes, in two color phases and two body positions. What’s more, the stake system is easy to set and makes motion in the wind.