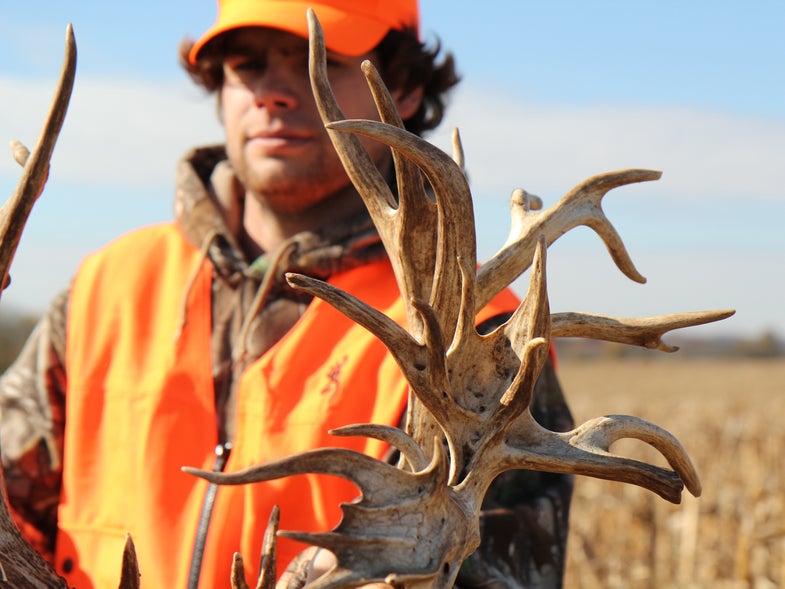 A quiet farmer from Sumner County, Stephen Tucker, 27, has been a deer hunter most of his life. Prior to 2016, his best buck was a 120-incher—a deer many would say is a “pretty good one for Tennessee.”

That all changed on November 7, the third day of Tennessee’s muzzleloader season, when Tucker shot this giant non-typical, which green-scored 308 2/8 net. If that score holds up after the 60-day drying period, it will be the largest non-typical whitetail buck ever taken by a hunter.

In late November, I met Tucker to hear his story. We pulled into a small farm on the outskirts of Gallatin, the county seat. There’s a long, narrow cornfield between a new subdivision and a four-lane highway that blends with a thick creek drainage. With the leaves down, you can stand on one side of the drainage and see through to houses on the other side.

“Would you expect a deer like that to live right here?” Tucker asked. I nodded. These days, it seems subdivisions are exactly where freakish bucks often like to call home.

Tucker’s family has been farming this parcel for more than 40 years. During that time, Tucker says, the place has gotten smaller and smaller as pieces of it have been sold for development. The subdivision we can see, for example, is only a few years old. Tucker himself has hunted the place some over the years—but the deer he saw from the seat of his tractor in September spurred new interest. “My uncle and I were shelling corn in this field, and he called me and said, ‘Look at that big deer up there.’”

When Tucker saw the buck he thought there must be corn stalks caught in its rack. “It just looked like stuff going everywhere in his rack,” he said. “I knew I wanted to set a couple trail cameras and get a better look at him.”

The first pictures revealed that it wasn’t corn stalks stuck in the buck’s antlers. It was a jumble on long tines. “When I saw him, my jaw hit the floor,” Tucker says.

The buck was a regular on camera in the early fall, but he was moving almost exclusively at night. “I only got two or three daylight pictures of him,” he says. “I’d go in at midday and swap out cards, and then get out of there. I decided not to pressure him until early November, during the muzzleloader season. I thought the beginning of the rut would be my best chance at seeing him in daylight.”

Tucker had good reason to be cautious. In such a developed area, and in a field on the side of the road, a number of people knew about the deer. Other hunters were after the buck on neighboring properties. But the farm Tucker was hunting seemed to be the buck’s core area. “I think he was bedding right there in that drainage,” he says.

Tucker set his ground blind overlooking the cornfield and creek drainage, where he’d gotten the most trail camera photos. The edge of the thicket was ripped up with fresh scrapes. He could see a couple hundred yards down the field, but the nearest scrape was just 30 yards away.

The Nov. 5 opener broke crisp and clear. Tucker slipped into his blind 45 minutes before daylight, and didn’t wait long for the action to start after shooting light.

“I looked out the window and the big buck was standing at his scrape, 30 yards away,” he says. Tucker steadied his muzzleloader and pulled the trigger. Snap. “The cap went off, but the gun didn’t,” he says. The buck looked around for a bit, worked his scrape over, and then eased down the field and out of sight.

Tucker made a trip to the gun range at midday. When he put another cap on, the gun fired without issue, and hit just where he’d aimed. He took a couple more shots for peace of mind. “I still don’t know what happened, or why it misfired,” he says.

He climbed back into his blind early that afternoon. Several does funneled into the cut corn, and an hour before dark, he spotted the buck standing on the edge of the drainage. “I hit him with my rangefinder, and he was 162 yards away,” Tucker says. “I thought about shooting, but that’s just farther than I’m comfortable with my muzzleloader. I definitely didn’t want to cripple him, so I held off. I hoped he’d move closer, but he just turned and went back into the drainage.”

Tucker was back in his blind again early on Sunday morning. Several does again stepped into the field. A couple of them spooked, and the morning ended without the buck making another appearance. “I really started getting worried at that point,” he says. “I knew I was educating some of the deer, and I didn’t want to run the buck out of there. So I didn’t hunt Sunday afternoon, hoping things would settle down.”

Monday was another good weather day, and again, Tucker slipped into his blind well before daylight. “Several deer came by me in the dark. I couldn’t tell what they were, but one of them was big,” he says. “As it started getting light, I could hear a deer walking in the thicket behind me. At one point, I thought it might be to the right of the blind, so I peered out from under that window to check. Nothing there—but when I turned to look out the left window, there he stood 30 yards away, on his scrape.”

Tucker had the camo mesh windows in place on his blind, and he was pretty sure the buck hadn’t seen him. Still, he was nervous about moving. “I let him start walking away before I reached for my gun,” he says. “I got it up to my shoulder, and I swear, that deer turned and looked right at me. It was like he was staring me in the eyes.”

Tucker waited, safety off, for just the right angle. When the buck turned broadside, he shot, and smoke filled the blind. “I thought I’d made a pretty good shot, but he took off with his tail up like nothing had happened,” Tucker says. The buck quickly disappeared into the drainage. “To be safe, I decided to give him an hour before calling some family to help me look for him.”

There was no blood in the cornfield or on the edge of the drainage. “I really started getting upset then,” Tucker recalled. “At that point, I didn’t know what I’d done.”

Finally, they found a few drops, and then a few more. “Fifty yards into the thicket, the blood trail got really good,” he says. “Then we looked up, and there he was, 20 yards away. I’d hit him just a touch back, but really, he didn’t make it far.”

The next few moments were a blur. “They said I cried. Maybe my eyes watered some,” Tucker says with a chuckle. “It was just an unbelievable feeling. One you don’t get from anything else.”

There were a bunch of points to count—47 scoreable ones, to be exact. Tucker knew he needed an expert to measure the buck. He called a local game warden for advice, who put him in touch with Capt. Dale Grandstaff with the Tennessee Wildlife Resources Agency. Grandstaff is an official Boone & Crockett measurer. He met with Tucker that night.

An official measurer since 2003, Grandstaff has scored a lot of deer—“but not many over 200 inches,” he says. “I’d seen trail camera photos of this buck two weeks before Tucker killed it. I thought it would go over 250—but I never dreamed it would break 300. I was pretty sure it had the potential to be the new state record. I wasn’t thinking about the world record.”

Grandstaff notes that the current state-record buck was also killed in Sumner County, not far from the Tucker buck. That deer was taken by David Wachtel, also with a muzzleloader. It had 49 scoreable points. “That area produces some really big deer,” Grandstaff says. “That’s one of the most common questions I’ve gotten about Stephen Tucker’s buck. People say, ‘Do you think that’s a real Tennessee deer?’ There’s no reason to believe that it isn’t.”

Certainly, the Stephen Tucker buck will shatter the Tennessee state record—and it’ll likely stand for some time. Whether it becomes the world record will be decided by a scoring panel in 2017. Tennessee isn’t a noted big-buck state, but then again, trends have shown that things are changing in the South when it comes to deer management and hunting. If a buck from the Volunteer State can dethrone a buck from Iowa as the new world record, it will indeed be the deer story of 2016—and maybe the deer story the decade.