Spring runoff or a sudden shower can make rivers and creeks a challenge to fish. But the payoff is a great shot at some hefty trout 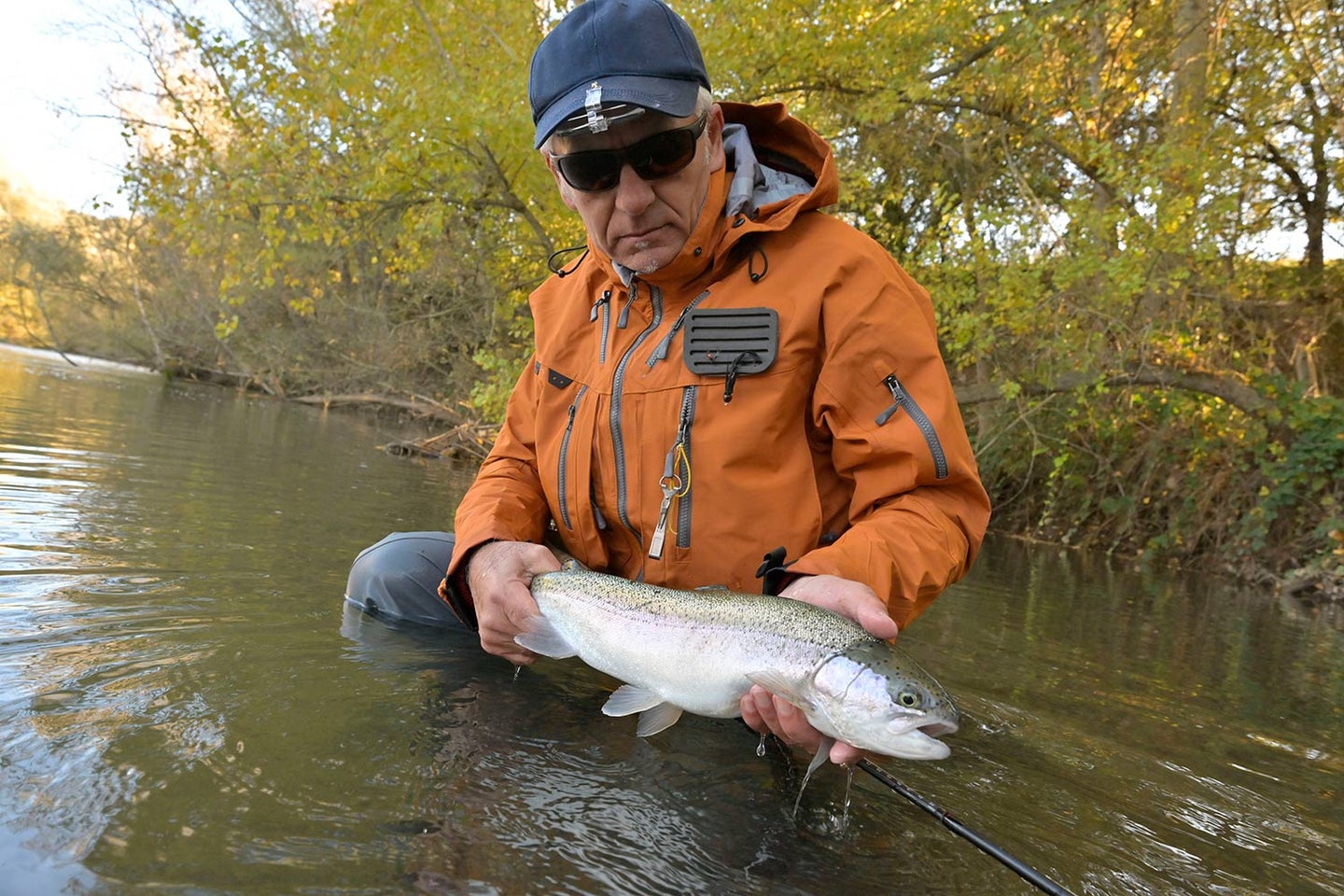 Editor’s Note: The trout season is only a week old here in New York as I write this. Just the other day, a friend of mine called to tell me that he was getting skunked on the local stream and to ask if I had any advice. I did, but it wasn’t my advice exactly. I used to fish the first weeks of the trout season with the late John Merwin, longtime F&S fishing editor. Once in a while, the April water was clear and low enough to catch rising fish on Blue Quills or Hendrickson Emergers. Most of the time, it was high and dirty, and Merwin was never above bouncing the bottom with a black rubber-legged jig or a garden worm on a split-shot dropper rig—not if it meant a shot at a good brown or rainbow. Whatever early-season advice I had for my friend most likely originated with Merwin, and some of it came directly from this column he wrote back in April of 2003. If the water is up in your part of the country and you’re not catching big trout, or any trout, give this a read before your next outing. —Dave Hurteau

High water for trout anglers is like mud and mosquitoes: unpleasant, but sooner or later you’re going to have to deal with it. Rivers running cold and bank-full are typical April scenarios in the Northeast and Upper Midwest; mountain-state anglers might not encounter those conditions until May or June, when the high-peak snowpack finally starts to melt. A sudden shower or thunderstorm can quickly raise water levels at almost any time and place. Should the rough conditions scare you off? Only if you’re afraid of a big trout taking your line into the backing.

If you see streams start to flood from a sudden shower or thunderstorm, run—don’t walk—to the nearest trout water. The first interval of rising water, just as the stream starts to go off-color with silt, is your best shot at a big fish. As the level goes up and the water becomes cloudy, trout become unusually aggressive. Not only do they seem to sense an influx of food brought by flooding, but also, the murky water gives them a sense of security from predators.

That wise old brown trout that eluded you last season is suddenly made vulnerable by its own greed. Strip a big streamer fly, toss a larger Rapala, or slowly roll a rigged minnow through a pool. Then be ready for a truly massive strike.

Trout activity will lessen as short-term flooding peaks. There is usually a second feeding cycle, however, as floodwaters drop, and the period just before the water fully clears can likewise be a bonanza.

Go With the Flow

When abnormally high flows from spring runoff are pounding the outside bends and pushing rocks down the riffles where trout usually hold, the trout move out of the way. The edges of riffle areas become prime trout lies, where trout may hold behind newly submerged rocks and along grassy stream banks. Other good high-water areas include the insides of river bends, where the current has less force and where silt, sticks, and leaves accumulate on the bottom. Work these areas by carefully drifting a nymph or wet fly or retrieving a small Mepps or Panther Martin spinner upstream. Worm fishermen will do best if they can keep the bait moving slowly along the bottom. Rig a split shot or two about a foot above your bait, cast upstream, and let the current roll your worm along the bottom as you feel the gentle tick-tick-tick of your split shot.

Water temperature can be very cold during spring runoff. In general, if the water is high and colder than 50 degrees, you’ll need to fish nymphs, small jigs, or natural baits very slowly along the bottom. Trout just won’t move very far to take them. If the water temperature is 50 degrees or higher (to a maximum of about 70 degrees), not only are trout more active, but natural trout foods are more active as well. Minnows and crayfish will be moving around, and aquatic insects will start to hatch. In high water, minnows will also move to edges and other areas of lesser current, which makes both streamer flies and minnow-imitating plugs good options. Mayflies and caddis will still emerge in the higher flows, and once again, quieter edges and backwaters may concentrate both emerging insects and rising trout.

Fly, spin, and bait anglers may all need a little added weight to get deep when trout are hunkered down in high, cold water. Here’s a simple rig that will save money by saving your tackle: Tie a Blood knot in your line about 18 inches above the hook. Trim one tag end close to the knot, but leave the other about 6 inches long. Fasten your split shot to that tag end. If the sinkers do snag on the bottom, a little tugging will cause them to slide free of your leader, but you usually won’t lose your fly or leader. If you do use this method, go with non-toxic split shot.

Another option is to use a slinky weight, which is nothing more than paracord stuffed with split shot. Because the weights are sheathed in the cord’s braided nylon covering, they tend to slide over and around rocks instead of getting wedged between them, which means fewer snags and less lost tackle for you. Pre-made slinky weights are available online and at shops that cater to steelhead anglers, but it’s easy enough to make them yourself. Just cut a short section of paracord, remove the inner fibers, stuff the hollowed-out cord with as much weight as you think you need, then crimp and burn the ends. Push the wire arm of a snap swivel through one end of the paracord, and then close, to attach the weight 18 inches or so above your fly or bait. —J.M. and D.H.