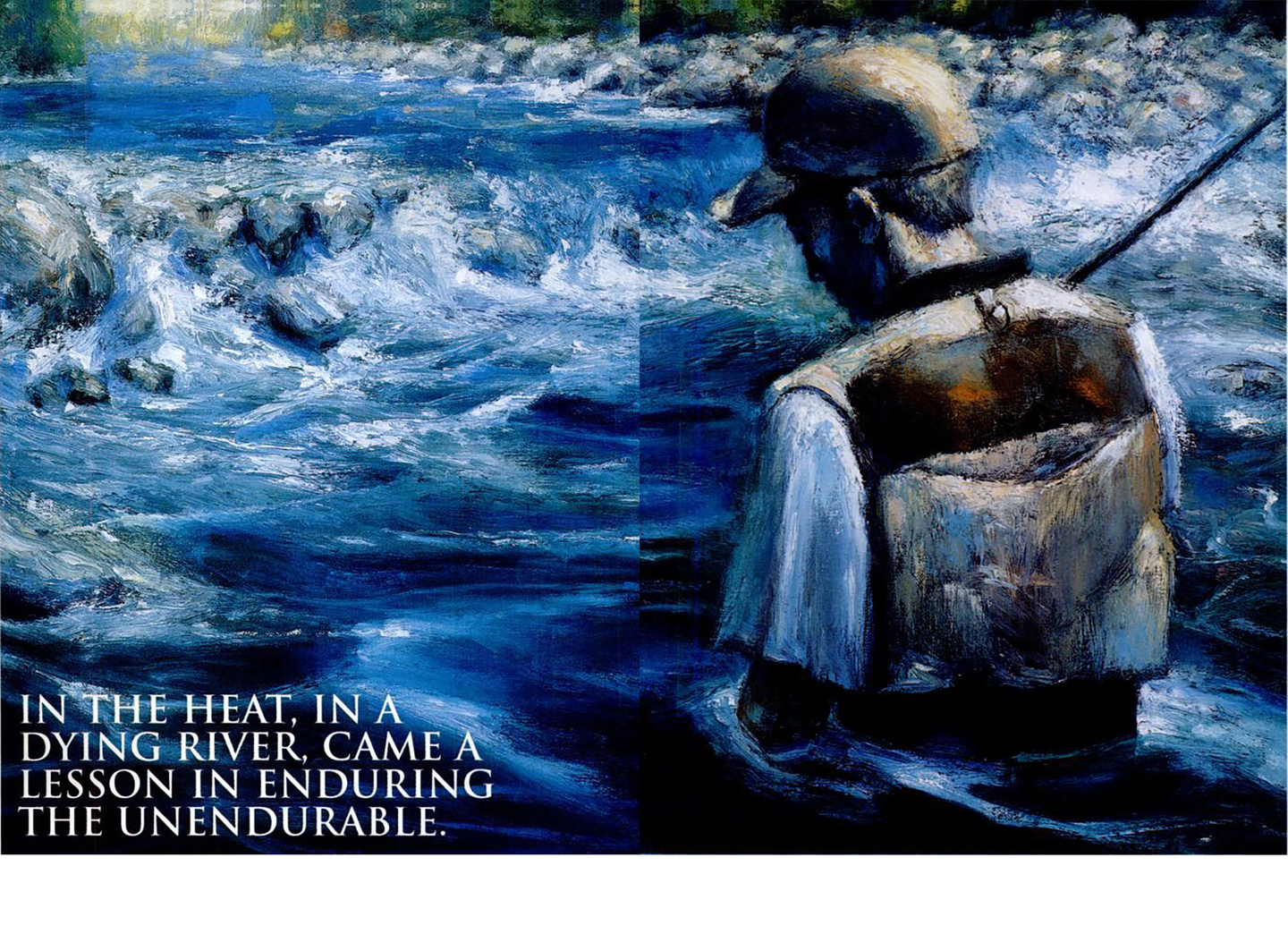 “Lilyfish” was first published in July 2000 issue with an illustration by Tom Steck. Field & Stream

This essay first appeared in the July 2000 issue. In it, Bill Heavey goes fishing and tries to make sense of the most heartbreaking event a parent could imagine.

AFTER THE WORLD takes an eggbeater to your soul, you never know what’s going to get you up and back among the living. In my case, it was the ham. It was 3:30 on a sweltering July afternoon, three weeks to the hour since my new baby daughter lay down for a nap and woke up on the other side of this life.

I decided it was time to go fishing. There were any number of good reasons. For one, I could still smell Lily’s baby sweetness in the corners of the house, still feel her small heft in the hollow of my shoulder. For another, I’d hardly left the house since she died and had taken to working my way through an alarming amount of dark rum and tonic each night, not a sustainable grief management technique over the long haul. Jane and I had planted the memorial pink crepe myrtle and the yellow lilies, chosen for having the audacity to bloom in the heat of the summer, the very time Lily died.

But it was the ham that got me off the dime. After the funeral, the neighbors had started bringing over hogs’ hind legs as if the baby might rise from the dead and stop by for a sandwich if they could just get enough cured pork in the refrigerator. I knew my mind wasn’t quite right, knew I still hadn’t even accepted her death. But it seemed like I’d lose it unless I put some distance between me and the ham.

I SHOVED a small box of lures in a fanny pack, spooled up a spinning rod with 6-pound mono line, and filled a quart bottle with tap water. On my way out the door, I stopped, as I have taken to doing since her death, to touch the tiny blue urn on the mantel. “Baby girl,” I said. I stood there for several minutes, feeling the coolness of fired clay and waiting for my eyes to clear again. Then I got in the car and drove 20 miles north of D.C. to the Seneca Breaks on the upper Potomac River.

I didn’t particularly care that it was 102 degrees outside. I didn’t particularly care that any smallmouth bass not yet parboiled by the worst heat wave in memory would scarcely be biting. I was furious at the world and everything still living in it now that my daughter wasn’t. As I drove, the radio reported severe thunderstorms to the west and said they might be moving our way. Fine by me. If someone up there wanted to send a little electroshock therapy my way, I’d be easy to find.

Even at five o’clock the sun still had its noon fury. The heat had emptied the normally crowded parking lot at the river’s edge. I stepped out of the air-conditioned car into the afternoon’s slow oven. I slugged down some water, put my long-billed cap on, found a wading stick in the underbrush, and walked into the river. The water was bathtub warm and 2 feet below normal. Seneca Breaks, normally a mile-long series of fishy-looking riffles and rock gardens was, like the only angler fool enough to be out there, a ghost of its former self. At least it didn’t smell like ham. But the fish weren’t here, and I realized I shouldn’t be either. It dawned on me that I’d better get in water that went over my waist or risk heatstroke.

Just upstream from the breaks, the river is called Seneca Lake, 3 miles of deep flats covered with mats of floating grass. I worked my way to the head of the breaks and slipped into this deeper water, casting a 4-inch plastic worm on a light sinker. Soon I’d waded out chin-deep into the lake, holding my rod arm just high enough to keep the reel out of the water. There were baitfish dimpling the surface every so often and dragonflies landing on my wrist, and once a small brown water snake wriggled by so close I could have touched him.

Nothing was hitting my worm, but that was to be expected. My arms seemed to be working the rod on their own, and I was content to let them. I stood heron-still and felt the slow current brush grass against my legs. Every so often, a minnow would pucker up and take a little nip at my exposed leg. It tickled. Baby fish. I remembered how I’d call her Lilyfish sometimes when changing her diaper, remembered how she had loved to be naked and squiggling on the changing table, gazing up at me and gurgling with something approaching rapture as I pulled at her arms and legs to stretch them.

The tears welled up again. I found the melody to an old Pete Townshend song running circles through my head and finally latched onto the chorus:

After the fire, the fire still burns,The heart grows older but never ever learns.

That’s how it was, alright. The fire was gone, but it still burned. It would always burn. The memories—her smell, her smile, the weight of her in my arms—would always smoulder.

And I’d always yearn for the one thing I’d never have.

And what struck me as I stood alone in the middle of the river was that while my world had been changed forever, the world itself had not changed a whit. The river simply went about its business. A dead catfish, bloated and colorless, washed serenely past, on its way back down the food chain. The sun hammered down, and a hot wind wandered the water.

I caught a bluegill, then two little smallmouths, within 10 minutes of each other. As I brought the fish to the surface, I had the sensation of bringing creatures from a parallel universe into my own for a minute before sending them darting back home. I wondered if death might be like this, traveling to a place where you didn’t think it was possible to breathe, only to arrive discovering that you could. I hoped it was. The older I get, the more I believe that there is such a thing as the soul, that energy changes form but still retains something it never loses. I hoped that Lily’s soul was safe. That she knew how much she was still loved.

I DON’T KNOW how long I stayed there or even if I kept fishing. I remember looking up at some point and noticing that the light had softened. It was after eight and the sun was finally headed into the trees. And now, just like every summer night for aeons, the birds came out: an osprey flying recon over the shallows 50 feet up; a great blue heron flapping deep and slow, straight toward me out of the fireball, settling atop a rock and locking into hunting stance. And everywhere swallows coming out like twinkling spirits to test who could trace the most intricate patterns in the air, trailing their liquid songs behind them.

Suddenly I wasn’t angry anymore. This is the world, I realized for the millionth time, and its unfathomable mystery: always and never the same, composed in roughly equal parts of suffering and wonder, unmoved by either, endlessly rolling away. It was getting dark now, hard to see the stones beneath the water. I waded carefully back to my car, rested the stick by a post for another fisherman to use, changed into dry clothes, and drove home.

Take your grief one day at a time, someone had told me. I hadn’t known what he meant at the time, but I did now. This had been a good day. Lily, you are always in my heart.