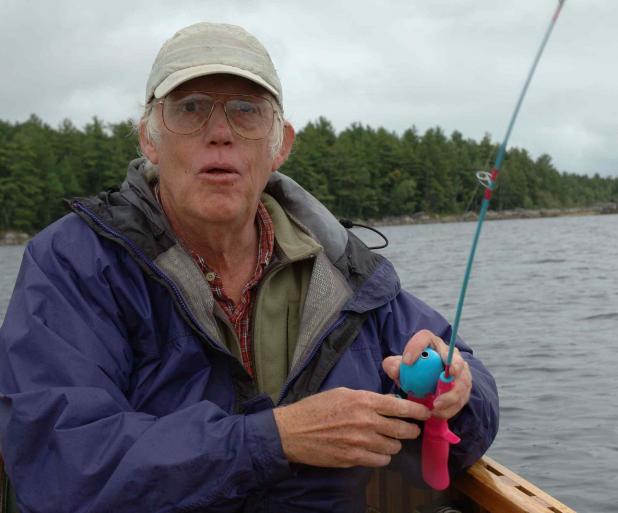 Merwin can’t hide his shock at learning that a child’s Barbie rod can handle a largemouth bass. John Merwin

John Merwin’s fishing column was typically reserved for expert angling advice, but every now and then we let him have fun—like when he wanted to chase striped bass with a toy fishing rod. This story first appeared in the May 2005 issue.

SO-CALLED SNOOPY RODS are the lowest of the low in fishing tackle. They’re designed to draw little kids into fishing who could care less about fish but love Tigger and Mickey Mouse. Real fishermen have long ridiculed these things, but the maker of one brand told me he sells about 500,000 of them a year.

It could be interesting, I thought, and probably funny, too, to see for myself what all those kids are fishing with. So I plunked down $9.94 for a Barbie Special, hid it in a big shopping bag, and took it home to test it out.

Dale Wheaton is a veteran guide and co-owner of Wheaton’s Lodge in southeastern Maine. When I walked down to his canoe on our first morning holding a Barbie outfit, he was pretty much stone-faced, though I think the corners of his mouth twitched.

After we’d taken some nice smallmouths on normal tackle, I rigged a soft-plastic Senko on the Barbie rod and flipped the lure about 30 feet toward the shoreline. It sank, the line quivered, and I tried to set the hook. But a solid hookset with the 2-foot 6-inch rod was difficult, and the fish was gone after a couple of jumps.

“Hey, let me try that thing,” Wheaton said. By the time he’d hooked and landed a smallmouth, he was laughing. The trick, as it turned out, was to use a really sharp hook and let the bass hook themselves as you reeled in. The short rod was a handicap but not insurmountable. But could Barbie handle saltwater?

Can You Fish Saltwater with a Barbie Rod?

Capt. Terry Nugent trailered his 24-foot Hydra-Sports boat to my motel, ready for a day on the waters off Cape Cod. His Riptide Charters is famous for everything from bluefin tuna to monster bass. I walked over to the boat and reached up to hand him Barbie. “Please put this somewhere safe,” I said.

“And just where would you like me to put it?” Nugent asked, eyeing it warily.

A short time later we were on the water and into some schoolie stripers, so I rigged Barbie with a small jig and carefully sharpened the hook. After watching me land one, Nugent, like Wheaton, wanted to fish with the thing.

Barbie handled small stripers well enough that Nugent was clearly impressed. “The thing with this is the challenge,” he finally said, “to see if you’re enough of a fisherman to actually make it work.” As we rigged the boat for the run back, he set Barbie proudly in a rod holder.

Barbie outfits are fun for their novelty value and work okay for tossing a worm-and-bobber combination 20 feet. But such short rods make hook-setting difficult, and their drags tend to be jerky, spelling trouble for small anglers trying to land larger fish.

A spincast reel paired to a 5- to 6-foot light-action rod is ideal. This sort of outfit is light enough to handle easily, and the longer rod length allows ample hook-setting force. The drags on most such reels are fairly smooth and can handle larger fish. My kids all started with similar outfits, with which they quickly learned to terrorize the local bass.