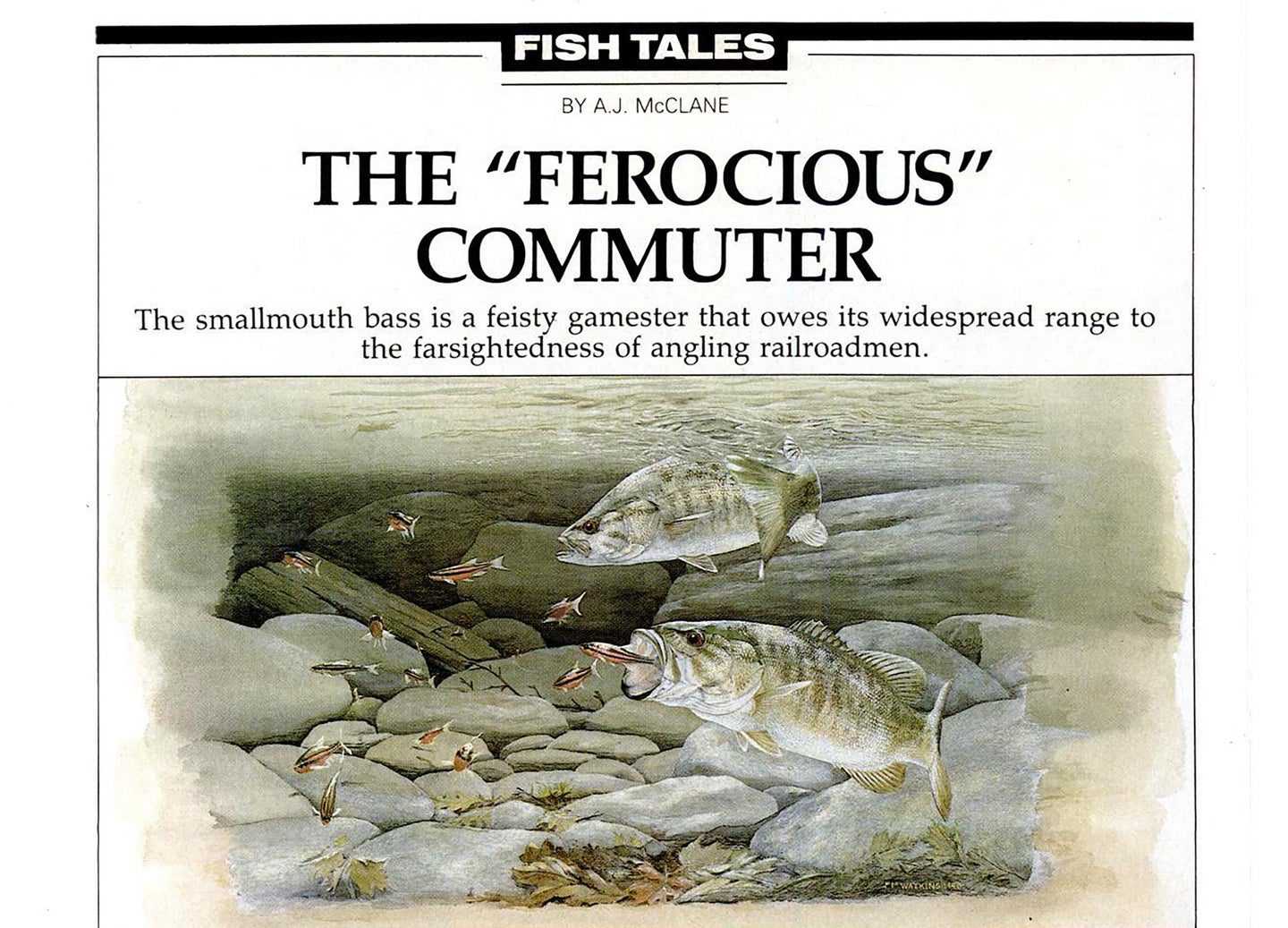 “The ‘Ferocious’ Commuter” is A.J. McClane at his best—exceptional writing with expert fishing advice woven into the narrative. The story ran with artwork by Frances Watkins. Field & Stream

This story first appeared in the September 1990 issue.

I REMEMBER the river in spring with its rosy-fingered dawns mirrored on hemlock-shaded pools when bankside cobwebs were spangled with luminous dew, and in the fall, when the sun fell like a golden melon over the edge of the world, as it does before evening’s chill, lighting the forest floor where maple leaves are soon limned with frost. And in drought summers, when great boulders lay bare and the riverbed looked like some prehistoric backbone twisted in a hundred sinuous curves. There was only one daily train into our town, and after it departed, the stationmaster, Dan Todd, often invited me to ride his handcar, to help pump the machine down the tracks. The railroad followed the river, and in many places we had a bird’s eye view of the water from its high banks.

Dan was a nut fly fisherman, and just the sight of swallows or cedar waxwings dancing over a riffle was reason enough to stop and try a few casts. Although occupying the same pools, smallmouth bass were a kind of sideshow on the East Branch of the Delaware-brown trout were the stellar event-but the spectral forms of bass rising to a hatch of mayflies or stoneflies, or a bounty of flying ants, was to a teenage addict worth pumping another 5 miles. I was immune to the salmonid syndrome (the idea that bass were inferior to trout extended all through traditional New England until recent years), and to me the bronze acrobat was maybe not as smart as the brown trout but more endearing for that reason. But if smallmouth fishing has a modern genesis, it began with the American railroads, for Micropterus dolomeu was at one time a regular commuter with a finfull of one-way tickets.

According to fossil records, the earliest known fishes go back to the Ordovician Age, about 400 million years ago. A group that eventually evolved from the existing herringlike and salmonlike Clupeiformes with their soft-rayed fins-and this was about 60 million years ago became the Perciformes with fins supported by both soft and spiny rays. This physical transition was the origin of thousands of marine and freshwater species, including the sunfish family. Exactly where or when a per coid fish became a genuine smallmouth bass is not known, but in a modern form it appeared in the Great Lakes during the late Pleistocene glaciation about 20,000 years ago. Its original range in the memory of man was limited to the Great Lakes and parts of the Mississippi basins in North America extending from northern Minnesota and southern Ontario eastward to Quebec, and from Minnesota south to northern Alabama and eastern Oklahoma.

The smallmouth first appeared in print in 1664 when Pierre Boucher published his Histoire Veritable et Naturelle de la Nouvelle France. Of course, “New France” was the province of Quebec, bordering the St. Lawrence River, where the abundant bass was known by the Algonquin Indian name achigan, which means “ferocious.” In French-speaking Canada it is still called achegar à petit bouche. But elsewhere its distribution was a slow process of transplanting the fish beginning in the mid1800′s; Connecticut in 1842; Massachusetts in 1850, Maryland in 1854, New Jersey in 1866, Maine in 1869, Vermont and Pennsylvania in 1870. Railroads followed all the big river systems and bass were often dumped off trestles by angling hobbyist engineers in the genre of Dan Cahill, who originated the Cahill fly pattern.

Trout fishing in a modern sense did not exist in that era. Eggs of the Western rainbow trout were only shipped to Eastern hatcheries in 1877 and the brown trout didn’t arrive in America from Germany until 1883, so a great void was being filled by the smallmouth before the turn of the century. The smallmouth did arrive in New York as early as 1825, but by accident rather than intent. It was naturally dispersed at the completion of the Erie Canal, giving the fish access to the Hudson River watershed.

None of these introductions was more fruitful than the journeys made by General William Shriver, who delivered a total of thirty small bass in a perforated tin bucket hung in the water tender of a locomotive in 1854 from West Virginia to the Chesapeake and Ohio Canal. The canal drained into the Potomac where, in the following decade, the smallmouth population boomed and spread through 200 miles of that river system including the fabled Shenandoah. This was the seed stock for some enthusiastic Pennsylvania anglers who caught them at Harper’s Ferry and transported live-boxes full to Lord de la Warre’s namesake river. As a result, the Delaware soon became one of the most productive bass streams in the East. In these pristine habitats, the smallmouths often weighed 5 to 7 pounds, according to the Baltimore Sun, with 4-pounders more or less commonplace,

Fishing of this kind no longer exists. Declining water quality took its toll; the fish marinated in a mixture of pesticides, coal dust, mercury, fertilizers, acid mine drainage, PCBs, acid rain, and God-knows-what-all, and the survival of the smallmouth in many Eastern waters is a miracle in itself. The all-tackle world record has been on the books for thirty-five years now, and it may well represent a climax weight for the species. In July of 1955, David L. Hayes caught a 27-inch long, 11-pound 15-ounce smallmouth in Dale Hollow Lake, Kentucky. The only other bronzeback approaching that size taken in recent years was a 10-pound 8ounce fish from Hendricks Creek in Kentucky. And the only other states reporting big smallmouths in the last decade, that is to say bass over 8 pounds, are Tennessee and Alabama. In northern waters, a 5pounder is an exceptional catch, and it may take ten or twelve years to grow to that size (a fourteen-year-old Maine smallmouth is the oldest on record).

Some years ago, biologists tried an experiment in intrageneric hybridization, crossing smallmouth bass with the largemouth, and the result was more achigan than the Algonquins had in mind. Dr. William Childers, reporting on bass genetics, observed that hybrids occasionally bit swimmers, actually lacerating the flesh, and several fish attacked a woman, striking her in the head and chest, driving her from the pond. The hybrids also attacked a dog in shallow water, and while Childers was inspecting a bass nest for eggs, the guarding male bass bit his leg.

Dubbed the “meanmouth bass,” it is debatable which parent produced the mean genes. Either species will, when big enough, eat just about anything that will fit in its jaws. However, favorite foods of the smallmouth include crayfish, insects, salamanders, shiners, sculpins, madtoms, darters, tadpoles, frogs, and the occasion al field mouse. Forage availability is the determining factor, bass in the Shenandoah River for example, feed heavily on the abundant madtom, while bronzebacks in Maine’s Big Lake gorge on insects, especially mayflies. Red-bellied dace can be an important food in one river, while the common shiner means chow-time in another.

For my part, the best of all smallmouth fishing is with the fly rod. There is a great variety of lures that will take fish: cork and balsa popping bugs; streamers like the Muddler, Zonker, and Woolly Bugger, dry flies and nymphs of all kinds; hair bugs that imitate frogs, mice, crayfish; and even some basic saltwater patterns. For years I have been fishing for bass with inverted hook bonefish flies that are virtually snagproof. One of the most effective patterns for me has been the epoxy-weighted Crazy Charlie, white- or pink-winged with strips of silver flashabou. For most fishing, I do well with three lures, a Queen Bee popper, a Black Woolly Bugger, and a Crazy Charlie, all on No. 6 hooks.

In lakes during those hot-weather periods when smallmouths retreat to deep water, I take along an ultralight spinning outfit and use grubtails, marabou jigs, spinnerbaits, and sonic plugs or rattlers. I prefer small lures with plenty of wiggle or vibrating action in weights from 1/16 to 4 ounce. Maybe it’s an antique in the eyes of my peers, but I still use a 5-foot fiberglass rod that weighs just 1ounces. In my opinion, space-age graphite and its composites are too stiff and too fast for casting ultralight lures, in the process of our building better mousetraps, only the mice have prospered.

On rivers, one can reach fishable depths of 4 to 6 feet with a sinking fly line and still have fun, but when working blind in lakes where bass are often down 12 feet or more, casting and retrieving becomes a laborious process, and long lengths of heavy taper handicap the spirited play of the fish. With a 4-pound-test monofilament on ultralight, I can comb the shoals, ledges, and dropoffs with a featherweight rod and enjoy the tug and pull of even a modest sized bass.

Any roll call of the best smallmouth waters must include the James, Shenandoah, and Susquehanna Rivers, the South Branch of the Potomac, Lake Champlain, Rainy Lake, the Quetico Wilderness areas, parts of the St. Lawrence, parts of the Connecticut River, the upper Penobscot River (between, this is for real, Passadumkeag and Mattawamkeag), Norris Lake, Pickwick Lake, and Dale Hollow Reservoir. My angling year includes a considerable variety of gamefish, but I haven’t missed at least one lengthy smallmouth trip in over four decades. I like the spring season best, fiddlehead and apple blossom time, when a bronzeback in the shallows will spring panther-like at a surface lure, then make a rocketing jump; such a simple act but always a startling experience no matter how often it is repeated. It is about as explicable as the electric pulse of sound through silent space.