How to Catch a Mess of Jumbo Perch 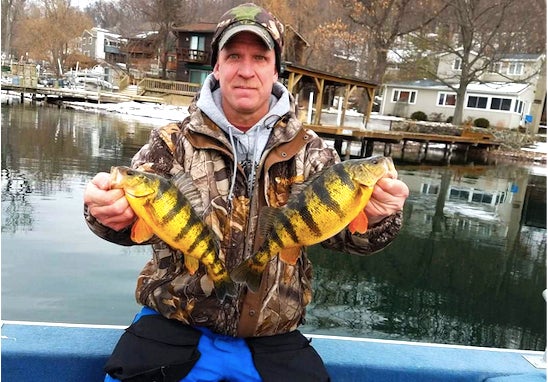 Jeff Dean of Dresden, New York, has been fishing for perch in tournaments and for fun in the state’s Finger Lakes region for more than 20 years. His biggest yellow perch weighed 2 pounds, 4 ounces. He starts fishing as early as February each year, or whenever the ice on lakes break up, and will fish into May if they’re still biting. He admits that spring turkey season pulls him away, but until then, it’s all about boating piles of big perch, as they move shallow now to feed and spawn. I managed to catch Dean off the water long enough to ask him all about it. Here are his secrets and tips.

Q: What the best way to find perch in the spring?

A: I key in on feeder streams, because that’s what the fish do. Feeder streams bring in a fresh wash of water and turn up food on the bottom for the fish. But it’s not as straightforward as it seems. Don’t ask me why, but the fish usually aren’t dead in front of the stream.

I start casting or checking my fishfinder 200 yards on either side of where the feeder comes in until I find a school. If that stream freezes up again or changes flow dramatically, the fish will react one way or another. There’s no magic formula. Finding perch is the heavy lifting of it all. I’ll spend half a day on a new lake before I catch a fish. But once I find that first school, I’m on my way, so I don’t mind.

Q: What kind of depth or structure are you looking for?

A: I’m looking for any kind of structure on a soft bottom. You don’t want a desert, you know? They’re like any fish. They want something to key on, whether it’s vegetation, fallen trees, or an old dock. Perch like places where they can stir up worms and bugs.

I’m also looking for a change in depth—a slope that I could mow with a lawnmower. That is, not too steep but adjacent to deep water. If I can find a place where the depth changes 10 or 15 feet in a 20-yard span, that’s ideal.

Q: So you find that, you find perch?

A: Ha! I wish. The thing about a pod of perch is they can be in an area the size of a couple of car hoods, okay? They’re often really, really concentrated. And perch—especially in cold water and especially with big perch—won’t chase your bait. You’ve got to put it right in front of their noses.

Now, if you find a pod of 10-inch fish in 15 feet of water, usually there will be a pod of bigger fish nearby and at the same depth. I know people say that different age classes are at different depths, and in different parts of the lake. I haven’t found that to be the case. Perch of different age classes don’t like to hang out with each other. But they’re often near other schools. And if I find fish at a given depth in one bay, the ones in the next bay are likely to be at that same depth. To me, it’s worthwhile spending time on that first bay to find fish and then move on rather than moving on sooner because I haven’t found them yet. Get to know one bay and you’re getting to know the lake.

Q: So how do you catch that first fish?

A: That’s where the work comes in, especially on a new body of water. What I do is just cover water. I use 7-foot St. Croix rods and little spinning reels spooled with 6-pound braid and a 6-foot fluorocarbon leader.

I’ll usually dropshot two bullhead minnows on a 1-ounce pencil sinker. One minnow is 12 to16 inches above the sinker and the other is 15 inches above that. I cast that thing way out. I mean bomber casts. And then I inch it back, pausing every 3 feet or so.

Another great bait is oak leaf grubs, which are actually crane fly larvae. If your bait shop carries them, buy them. You ask any old perch angler, and that’s his favorite bait. Of the 40 or so derbies that I’ve fished, I’d say two-thirds of them were won on oak leaf grubs.

Q: How do you stay on a school once you find it?

A: When I hook up, I note exactly where my bait was, and then I mark that spot as accurately as I possibly can. The Spot Lock feature on a motor does wonders for this. I haven’t dropped an anchor in four years. And I tell you what: I don’t miss the cold, wet hands. The other thing I like is a GPS feature that keeps you on a straight line. But before I had a motor with Spot Lock, I used marker buoys, which also save you tons of time looking for where you just were.

Q: Perch bites can be notoriously difficult to detect. Talk to me about that.

A: Smaller males, 10 to 12 inches, are aggressive. You’ll feel it. You yank to set the hook and either you get the fish or miss. Big fish, say a 2-pound female, will mouth it gently without moving. She just sucks it in and thinks it over. You feel a momentary change in tension, as if the line moves away from you for a second or like you’ve snagged some vegetation. Half the time it is just weeds, but the other half it’s one of those fish that you go to all the trouble for. By the way, I’ll go to a 4-pound fluorocarbon leader when I’m fishing a tournament and need a 2-1/2-pound fish. Those big mama perch are fussy. They will not bite if they see a knot in your line. I’m not kidding about that. Big perch are probably the hardest freshwater fish to catch. Fluorocarbon has increased my hits by 40 percent, I’d say. Those really big ones can win you a tournament, and they’re easier to clean for the fish fry too.