There's a lot to be said for subtle presentations and sipping trout. But if you add a little action to your dry-fly drift, they’ll clobber it 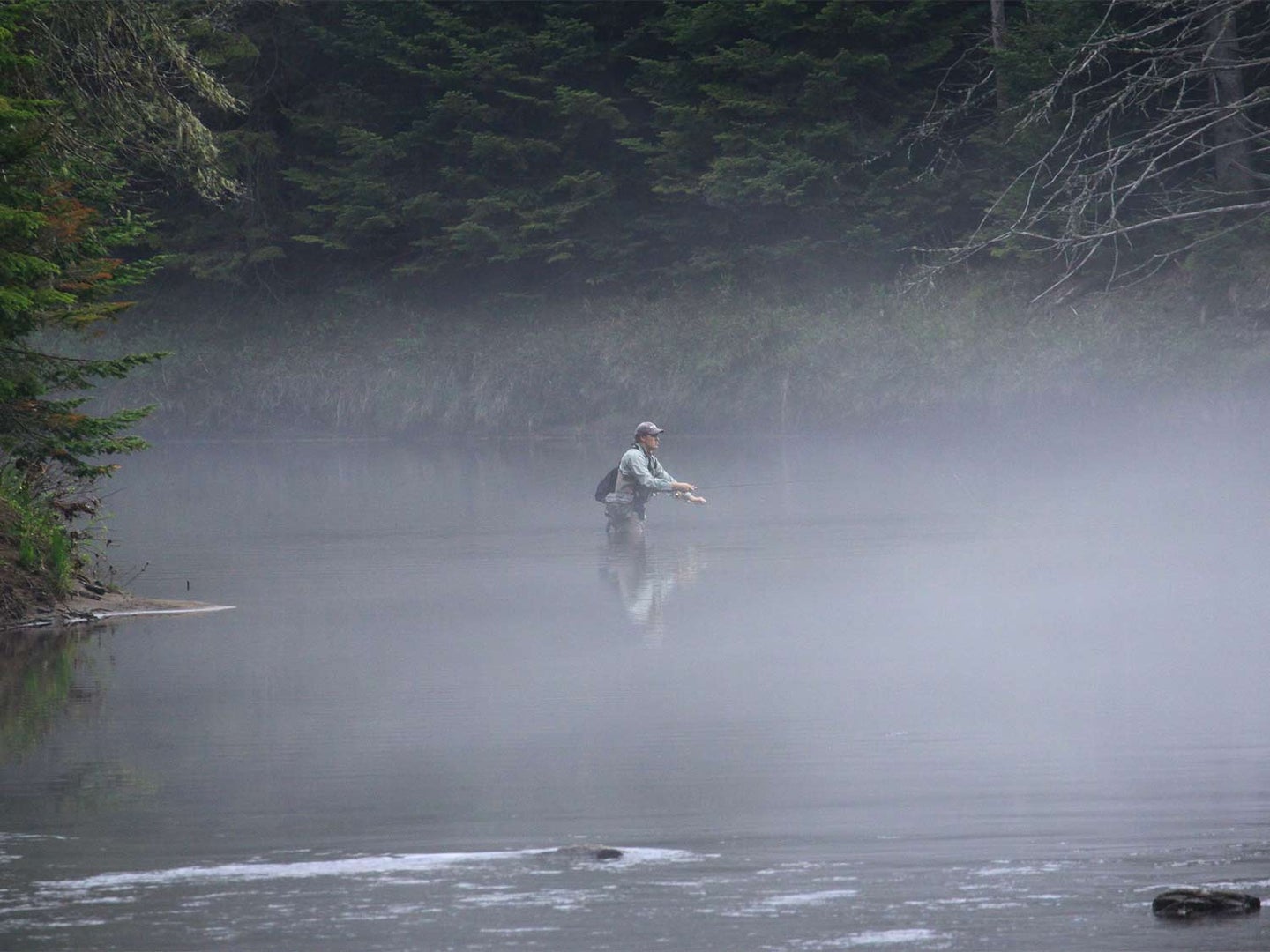 Even in quiet tailouts, twitching a fly slightly can goad a trout into taking it. René Dupuis from Pixabay
SHARE

Years ago, with a smattering of big Isonychia duns bouncing above New York’s West Branch of the Ausable River, a friend and I cast to glides between the boulders and watched our Gray Wulffs sail smoothly downstream, untouched.

After a while, we figured the trout weren’t taking duns, but we kept casting because there’s something hypnotic about watching a dry fly float quietly on the current. As I watched, a low-flying dun crash-landed on the surface next to my fly. But unlike my fly, it didn’t drift quietly. It kicked and fluttered frantically across the current—until a bulging wake surged through the slick and buried the fly in a yellow swirl.

That changed our minds about whether the trout were taking duns—and made us rethink how to present them.

There’s not an angler among us who doesn’t take pleasure in watching a dry fly drift perfectly downstream, moving only with the motion of the current. It’s a satisfying thing, full of promise. And though dead-drifting a dry is no longer dogma in American flyfishing, it’s an easy habit to get into. Trouble is, while rapt in our perfect drag-free drifts, we tend to forget a couple of fishing fundamentals.

First, living bugs move—they hop, dart, flutter, and twitch on the surface. Second, trout are attracted to such movement. A trout’s survival depends on its ability to differentiate between drifting food and the countless bits of inedible debris also carried in the current. It does so, in large part, by detecting movement. You can use that to your advantage by skating, skittering, and twitching your dry flies. The key is to know when to do each and how to do them in a way that is most apt to draw a strike from a hungry trout.

How to Skate a Dry Fly for Trout

Grasshoppers blown from grassy banks hit the surface kicking. Egg-laying stoneflies skim the film clumsily. And windblown mayflies, including Isonychia duns, often panic on the water. Real bugs don’t skate, per se, but these and others do occasionally scramble or dart cross-current more than a few inches at a time. One good way to imitate that action is by skating a dry fly.

Start by tying on a buoyant imitation, like a Wulff or a Stimulator, and making a fairly short cast down and across. Then, hold the rod tip high enough to keep at least most and preferably all of the fly line off the water. Don’t follow the fly with your rod tip; hold it high instead and keep it there. As the fly begins to swing, wiggle your rod hand side to side. Then watch your fly skim lightly and erratically across the current. Be ready for a slashing strike.

Skating usually works best in the infertile currents of medium- to fast-moving freestone streams. Here, it’s not only easier to wade close and cast downstream without spooking trout, but the trout themselves are more apt to pounce on anything that resembles food. When you are prospecting the slicks and pockets, skating commonly raises fish. But it works best when the usual suspects—caddisflies, stoneflies, grasshoppers, or big mayflies—are about. And on those rare days when you actually see the usual suspects scrambling cross-current—and getting clobbered by trout—you’d better have this tactic in your bag of tricks.

How to Skitter a Dry Fly for Trout

The Elk Hair Caddis is the quintessential skittering fly. Orvis

When the evening air turns still and is cast in that yellow haze, we commonly see caddisflies hopping and darting spastically on the surface, as if the film were too hot to land on. This is the classic scenario for skittering a dry fly, usually an Elk Hair Caddis.

Cast up and across. Then, as you strip in slack line, wiggle your rod hand up and down as if you were rapidly tapping a tiny nail with a tiny hammer. Your fly should skip and skitter as it floats downstream. You can also skitter a fly with a downstream cast; it just looks a little different. Cast down and across, then pop your rod hand upward to make the fly jump erratically. (You may need to kick out line in the process for longer drifts.) As the fly begins to swing, you can keep popping it cross-current, or you can raise the rod tip and skate the fly.

The reason why skittering is most commonly used to imitate caddisfly activity is because it does a darn good job of it. But, and this is important, skittering can do a darn good job of imitating any insect that’s moving erratically on the surface, including those mentioned above. Skittering and skating impart different actions to your fly, but both can be effective in many of the same situations. If you can see the naturals clearly on the water, let them dictate how you manipulate your fly. Otherwise, mix it up and find out what the trout prefer at a given time.

How to Twitch a Fly for Trout

You can subtly twitch about any dry fly, but a CDC-style dry works especially well. Orvis

Mayflies are a mostly subdued bunch. But even those newly hatched in the surface film, floating delicately downstream, subtly flutter and twitch. We may not notice their movements much, but trout do. And if you want those trout to notice your mayfly imitation, twitch it.

Twitching a dry fly is easy, and there’s no simpler way to catch more trout. Cast down and across. Let the fly drift a bit. Lift the rod tip slightly until the fly twitches, then lower the rod tip and let the fly drift quietly again, kicking out line as needed.

That’s it. Furthermore, you can twitch almost any dry fly to good effect. You can do so in the slicks of tumbling streams or in the tailouts of smooth pools. And though a downstream presentation gives you more control of the fly and makes twitching easier, you can, if you must, twitch a fly with an upstream cast by jerking your rod hand upward as you strip in slack line.

In each case, a subtle twitch separates your fly from drifting debris and can make it stand out among the naturals. When you are casting to a rising fish, cast upstream of the rise and twitch the fly subtly just before it enters the strike zone. The trout will usually take after the twitch, as the fly is drifting quietly. When you are prospecting, a twitch or two per drift will usually raise more fish.

Now, here’s the secret to all three tactics: Don’t overdo it. A twitch should be subtle, so that your fly moves only an inch or less. Skating and skittering often work best when interspersed with quiet drifts. And the slower and flatter the water, the subtler you need to be.

A perfectly skated or skittered fly can spook trout on glassy currents. So use these tactics when the activity of the naturals dictates or when dead-drifting just isn’t working and you need to try something different. Even when caddisflies, stoneflies, or terrestrials are moving spastically on the surface, a twitch or two is sometimes all that’s needed.

And one more thing—something my buddy and I learned quickly that day on the Ausable years ago: If you’re going start skating big flies to slashing trout, you’d better tie on a heavier leader. It’s not an issue when subtly twitching a dry, but for skittering and especially skating flies in fast-moving slicks and runs, you might need to go up to 3X or more to keep from breaking fish off. It may be overkill for those overeager 9-inchers, but when that big, yellow swirl comes, you’ll be glad to have it.