How much money do the pros take home in tournament winnings? Nobody on this list has made less than seven figures 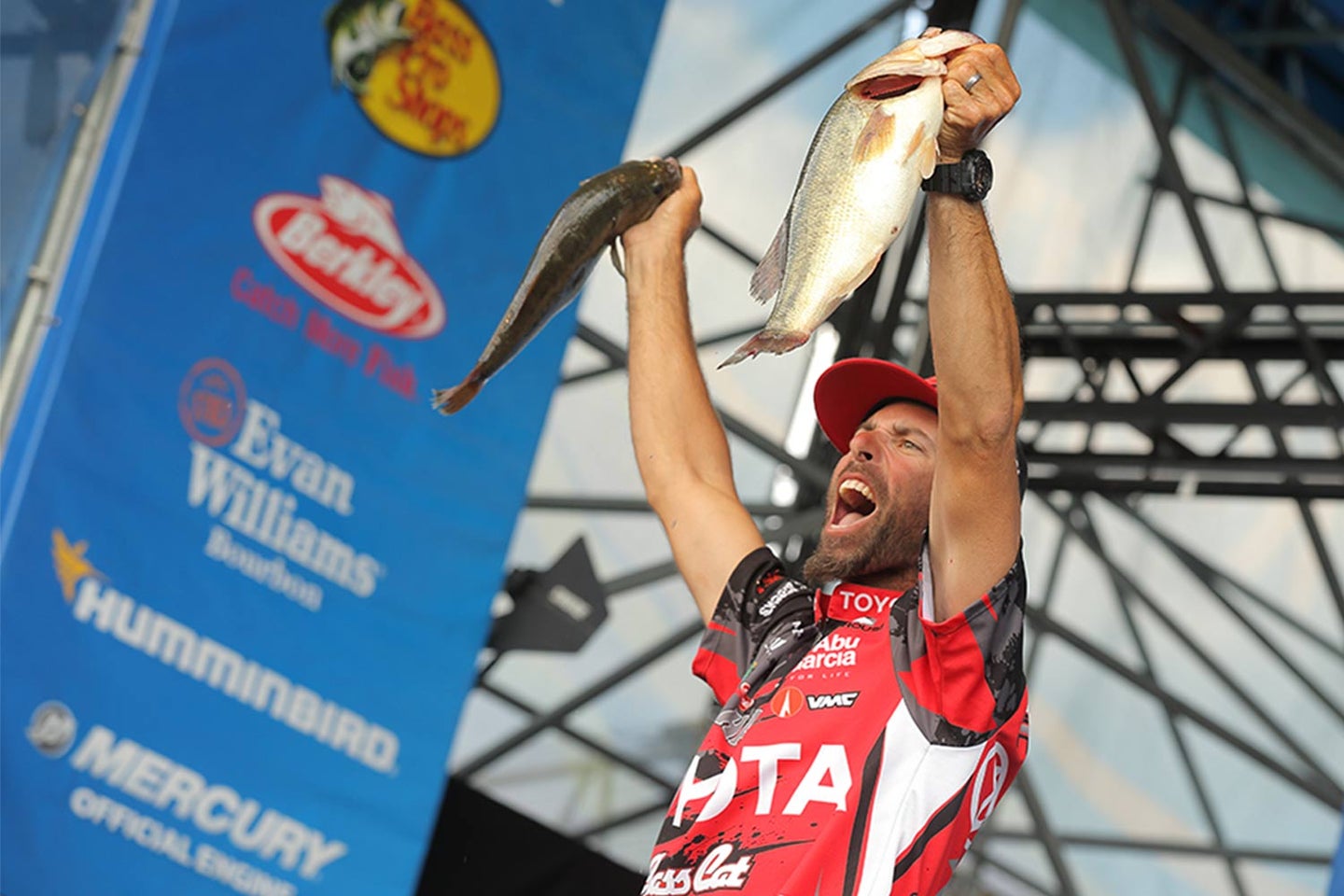 Just as every country club duffer envisions himself on the back nine at The Masters, most weekend anglers have at some point fancied the idea of making a living fishing for bass.

It would seem to be a great lifestyle—using all of the latest gear, going from one world-class fishery to another, and trying to clear space on the mantel for all of the new hardware. Except it’s not that easy. With heavy entry fees and big expenses, few can hack it, which makes it even more impressive when someone makes a solid living with a rod and reel.

As you consider the top 10 money-winners of all time (as determined by cumulative winnings with B.A.S.S., FLW, and Major League Fishing, prior to the 2020 season), take these numbers with a slight grain of salt. First, remember that prize money has increased substantially in recent years, so someone who won 10 tournaments in 1975 might not have made as much as someone who won two or three in 2010. Second, there are other regional circuits that pay well, with lower expenses, and since tabulating those figures is darn near impossible, we didn’t include them. Finally, many of the top pros make a substantial portion of their income through endorsements and appearance fees, so a good promoter who is not quite as good on the water can take home more money than a top angler who doesn’t want to engage in the hustle.

Nevertheless, these top 10 have staying power and excel on all fronts, so you can be sure that their ancillary income matches up to their tournament winnings.

You might expect the son of a nine-time Bassmaster Angler of the Year to have trouble carving out his own identity on tour, but Scott (whose mother Mary Ann was also an able competitor on the Bass’n Gals tour years ago), has done an exemplary job. He was the FLW Angler of the Year in 2015 and has won eight tournaments on that circuit, including the 2011 Forrest Wood Cup. He is currently fishing all of the Bassmaster Opens in an attempt to qualify for the Bassmaster Classic and the Elite Series.

This lanky Texan began competing at B.A.S.S. in 1990 and reached the pinnacle of the sport when he won the Bassmaster Classic on South Carolina’s Lake Hartwell in 2008—a victory that earned him a trip to visit George W. Bush in the White House. He won a total of six tournaments with B.A.S.S., spread among five different states. Today he and his son Alton Jr. both compete on the Bass Pro Tour.

Iaconelli’s career has been defined by the “Never give up!” motto that he screamed upon catching the winning fish at the 2003 Bassmaster Classic on the Louisiana Delta. For many pros, that would have been their crowning achievement, but for fan-favorite Iaconelli it was just another day at the office. The Classic win was one of eight victories with B.A.S.S. Three years later, he won that circuit’s Angler of the Year award in the inaugural campaign under the Elite Series banner. He also won the FLW Chevy Open on the Potomac River in 2005, along with its $200,000 purse. He currently competes on the Bass Pro Tour.

Read Next: The 8 Highest Earning Bass Lures in Competitive Fishing

This Californian qualified for the Bassmaster Tour out of that league’s now-defunct Western Opens. With his signature yellow boat and jacked up truck, Reese would still be a presence even if he never caught a fish. Despite that disclaimer, he’s proven to be an exceptional angler, with eight B.A.S.S. victories, highlighted by the 2009 Bassmaster Classic championship on Louisiana’s Red River. He also won that circuit’s Angler of the Year title in 2007, and was one of the first anglers to win a tour-level event outside of the West on a swimbait. He currently competes on the Bass Pro Tour.

Clunn won back-to-back Bassmaster Classics in 1976 and 1977, and added two more in 1984 and 1990. That total of four is matched only by Kevin VanDam—no one else has won more than two. Clunn also won the Angler of the Year title in 1988, and has totaled 16 victories with B.A.S.S., most recently winning two Elite Series tournaments on Florida’s St. Johns River in 2016 and 2019. During a stint at FLW, he added three tour-level wins on that circuit between 1997 and 2000. At age 73, he continues to compete on the Bassmaster Elite Series.

Evers started fishing B.A.S.S. events in 1997, and quickly established himself as an exceptionally versatile angler, equally able to do well whether flipping, cranking, sight fishing, or dropshotting. The proof was on the score sheet, as he went on to win 11 Bassmaster tournaments, including the 2016 Bassmaster Classic in his home state of Oklahoma, where he caught a huge final day bag to come from behind. He currently fishes the Bass Pro Tour and won that circuit’s inaugural Redcrest championship in 2019.

Hackney is one of the most meticulous flippers on tour and a shallow water phenom, but over the course of his career, he’s managed to become exceptionally well-rounded. At B.A.S.S. he won six tournaments and qualified for 15 Bassmaster Classics, while claiming the Angler of the Year title in 2014. At FLW, he won three tour-level events, including the 2009 Forrest Wood Cup on Pittsburgh’s Three Rivers, which earned him a cool half-million bucks. He currently fishes the Bass Pro Tour.

California native Aaron “A-Mart” Martens has developed a reputation for mastering all conventional techniques, while also developing some of his own, and resuscitating lures that were believed to be extinct. He’s a master of finesse, and has likely caught more double digits on light line than most pros will ever catch on all tackle combined. He may be best known for four second-place finishes in the Bassmaster Classic (among 20 appearances), but that betrays how consistent and talented he really is—as evidenced by three Bassmaster Angler of the Year titles. Along the way he’s won nine B.A.S.S. events, and also managed an FLW win in 2003 on Alabama’s Wheeler Lake. He now fishes the Bass Pro Tour.

Read Next: 10 Hottest New Baits from the Bassmaster Classic

David Dudley was kicked off of his high school baseball team for fishing a tournament instead of attending practice, but that trade-off seems to have worked out well for the all-time leading money winner on the FLW Tour.

He won his first B.A.S.S. event at age 20 on Virginia’s James River, and his second nearly 20 years later on Smith Mountain Lake. He also won the Forrest Wood Cup on the James in 2003, and subsequently won FLW’s Angler of the Year award four times, most recently in 2019. He now fishes the Bass Pro Tour.

The all-time leading money winner began his career at B.A.S.S. in 1987, and earned all of the other applicable credentials for induction into the Bass Fishing Hall of Fame long before he turned the requisite age of 50, at which point he was unanimously voted in. His otherworldly level of winnings was bolstered by four Bassmaster Classic wins, including back-to-backs in 2010 and 2011, and a remarkable seven Angler of the Year titles. The four Classic wins were among his record 25 first-place finishes at B.A.S.S. Along the way, in his spare time he managed to qualify for two Forrest Wood Cups and competes today on the Bass Pro Tour. He is known as the consummate power fisherman for his skill with a jerkbait, crankbait, and spinnerbait, but during his 2005 win on Lake Lewisville, he set the then-lake-record using a finesse presentation.