Once you fight your first wild steelhead, you’ll see why anglers say the “tug is the drug” 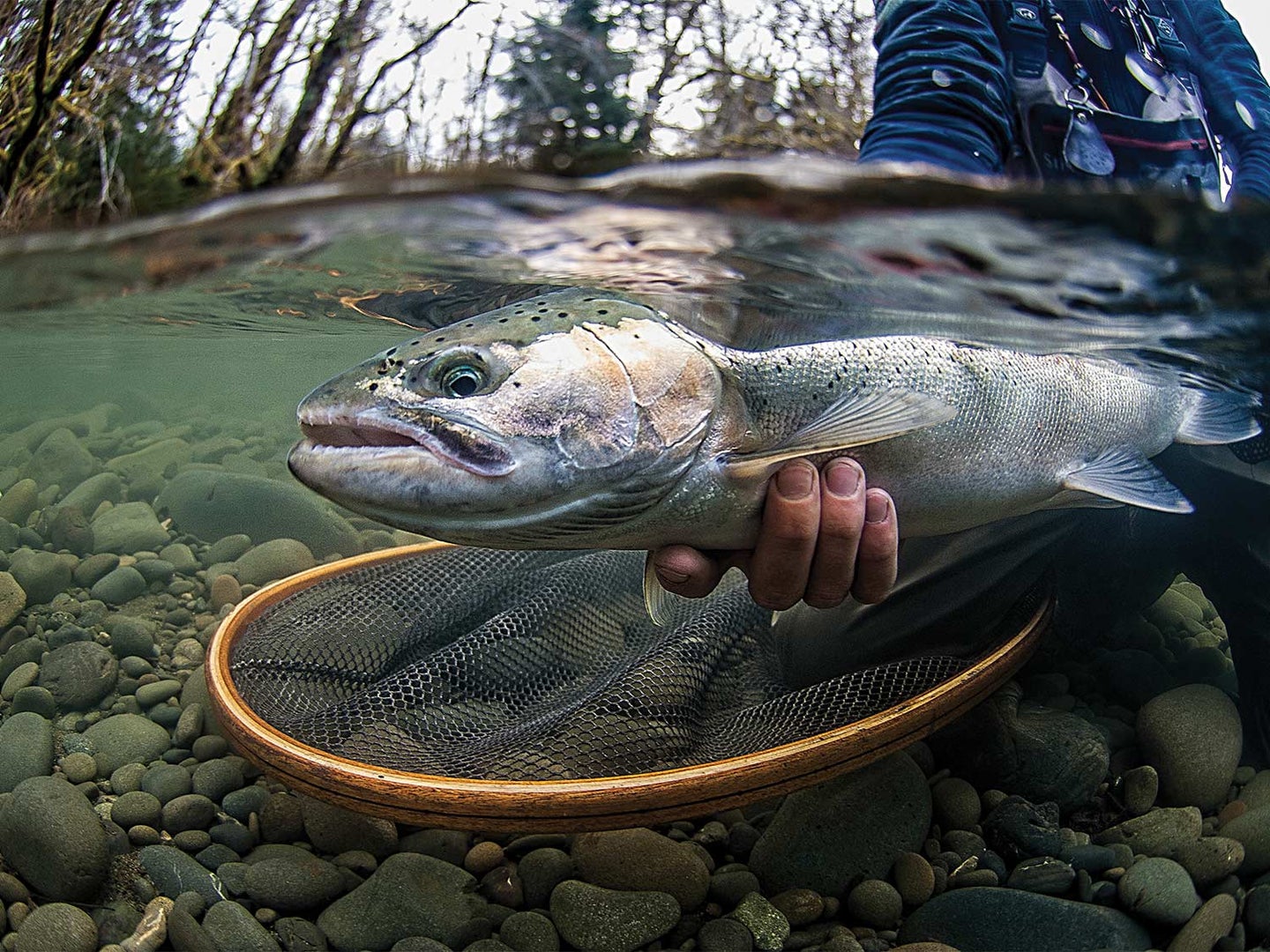 Steelhead that come to the net are rare, which is what makes each one so special. Tosh Brown
SHARE

My baptism in steelhead fishing began with a bang. At least as much of a bang as a .22 pistol can make in a canyon smothered by fog. Of the gun I recall nothing beyond its barrel. Nor, oddly enough, do I recall the fish, except that it was a winter run. Seven pounds, a bit more in the telling. But the executioner, that man I remember. He had sandy hair, a pencil mustache, and a right cheek that twitched. He was the friend of a friend and new to Washington state, he and his wife having recently emigrated from Germany. He said they had traveled the breadth of Canada by rail and, having little money, had eaten hot dogs every day.

He paced the bank as my steelhead fought, cheek twitching, gun drawn. “What are you doing?” I asked, a question put to rest by the crack of the pistol. The steelhead rolled over, a smoke of blood issuing from its head.

“I don’t ever take a chance landing steelhead,” he said.

I am long into the echo of that shot now and the river is no more—this having been the Toutle, swallowed by ash when Mount St. Helens blew five years later. Yet despite the inauspicious beginning, I have been compelled to fish for steelhead ever since. I added up the rivers once, somewhere in the mid-30s, mostly in British Columbia and the Pacific Northwest with a few of those tea-stained Great Lakes streams in the mix.

The river I’ll be fishing this fall twists through a canyon so deep it warrants a sign: 115 switchbacks next 5 miles. The current that cut that canyon looks shallow and benign. It is neither. I have floated it, portaging a rapid where the river sucks down to a plume of dragon’s breath and the names of those who tempt their fate and capsize are burnt into crosses. One of those crosses is wound with the carcass of a rattlesnake.

For two decades this river was very good to me in country unspoiled by the human hand. I camp where bighorn sheep cock their heads and give you their amber eyes and chukars flush from the bankside brambles. Now, like almost everywhere else, the scenery remains good and the fishing is fine, as long as you don’t care too much about the catching.

Seven dams that impede the progress of steelhead as they seek out this river are tombstones by another name. Add to the equation seals and killer whales, philistine netting practices, and a giant blob of hot water where the sweet water meets the salt, which is a death zone for adult fish and smolts alike, and you get the picture. They say the blob is dissipating now, diluted by cold currents from Alaska, but the tugs on the line don’t seem to come with any more frequency.

The only upside is that poor fishing rids the river of anglers who need to feel a rod bend, leaving it to us who come because we have to, even if we don’t know why. I am at best an honorary member of this band of misfits, old hippies, and lost causes, a wannabe steelhead bum who opted to stay married and so never quite made the grade.

Like every steelhead fanatic, I live largely in the past. I can revisit most of the fish I have caught, tell you the river, the fly, even the weather, everything but what happened after the fish jumped. Those next minutes, right up until I placed my hand over the tail, I cannot recall, only hope to experience again. And that’s the pull, really. Fishing for steelhead is an act of faith. Each cast by itself stands no chance, and at nightfall of the first day, you have done nothing more than shake the river’s powerful hand. But two hundred casts into the day after, or the next—that is, when hope is all but gone—that’s when the fly swings and the heart stops. In this time of national tragedy and shattered aspirations, steelhead remain an attainable dream, and the most memorable you will never land.

I am thinking of one fish from the Kispiox that, after jumping end over end, charged upstream as if to get a look at the source of its annoyance. When the leader broke, I shook. How big? I just remember I was afraid to hook another. Equally memorable was a B-run fish in the Clearwater River that I could only follow if I waded up to my neck around a bridge piling. When that steelhead, too, was lost, I emptied the water out of my waders and built a fire on the riverbank. It was, after all, November.

Will this season write another story? The numbers are down, but even man, who kills what he loves, cannot kill them all, cannot blind their far-seeing eyes nor tame their wild spirits.

In dreams I see their mirrored sides flash like beacons, one light following the next as they find their way back into the past, and into their uncertain futures.