The 10 Best Upland Shotguns Ever Made

Each of these well balanced, easy-to-carry guns are perfect for upland hunting 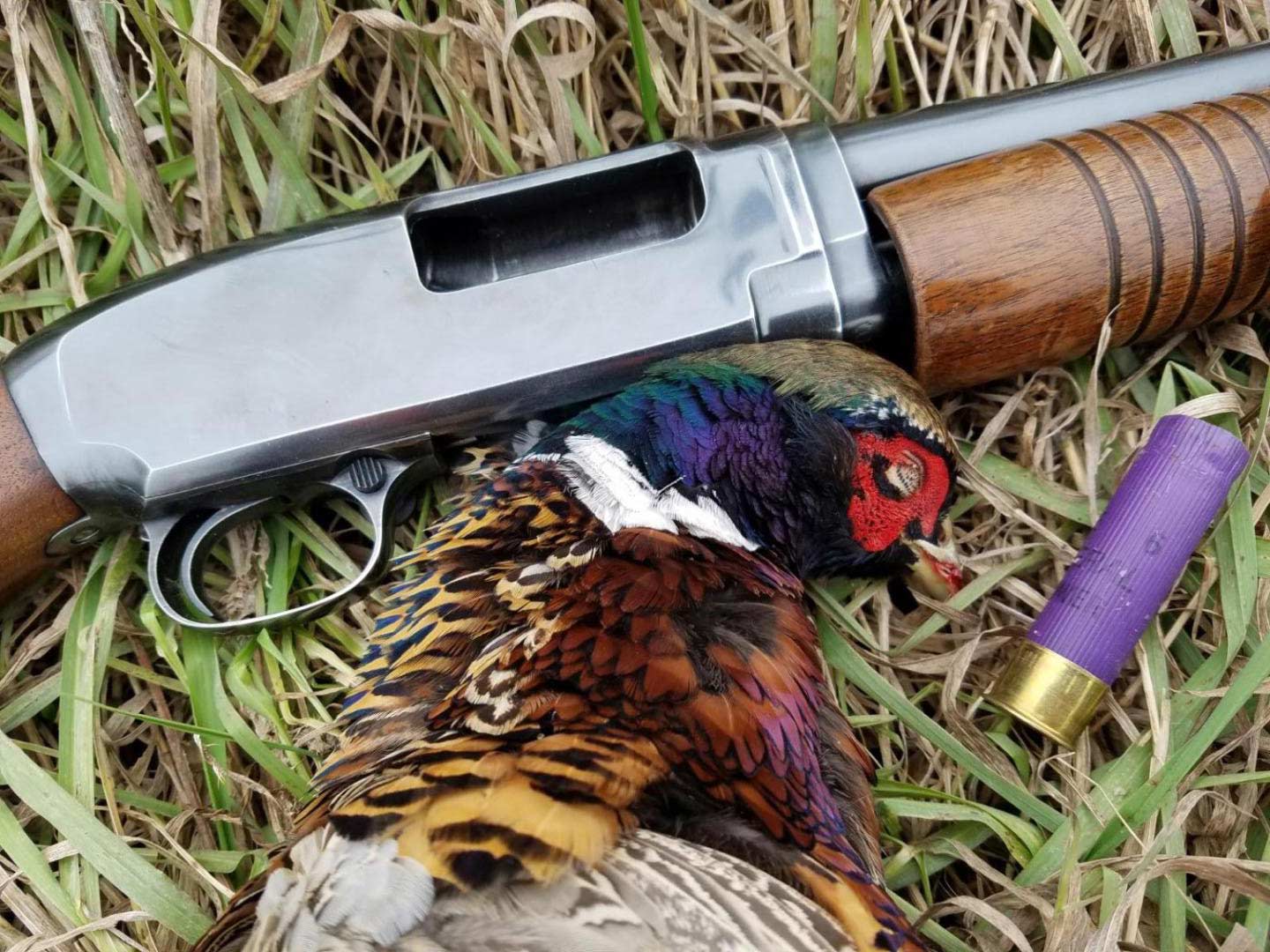 More than any other shotgun, an upland gun has to be almost a part of its owner. It has to fit, so you have complete confidence that it will shoot where you look, and it should point as easily at the bird as you might point a finger. It has to be light so you can carry it comfortably for miles, yet still be substantial enough to swing smoothly. The best ones have the right weight and balance so they accomplish the trick of “carrying light and shooting heavy.”

And while good looks aren’t a strict requirement for the job, upland hunters tend to appreciate tradition and the finer things, so many upland guns have walnut stocks and at least some engraving. An upland gun can be a pump, a semi-auto, an O/U, or a side-by-side. Each has its fans and advantages, and all four are represented in the list below. Any one of these 10 guns would be a faithful companion in the uplands.

With well over 10,000,000 made, the 870 makes almost any “best ____ shotgun ever made” list by sheer weight of numbers. But the 870’s mass popularity shouldn’t blind us to the fact that it has all the traits of a good upland gun. The 870’s stock, with its thin comb and substantial drop, fits a lot of different shooters. The 12-gauge 870 is actually built on a 16-gauge Remington 11-48 frame, making it a trim and fairly light gun that handles very well. The action is fast and reliable, and it comes in all gauges. The 870 you want is the Wingmaster, either an old fixed-choke model or one of the newer guns with Light Contour barrels. They are much lighter and livelier than the Express and SP versions, which have barrels beefed up to accept choke tubes.

Beretta’s basic O/Us are among the most popular shotguns in the world, and for good reason. They are light, trim, and extremely durable. I have seen one owned by a sporting clays champion that had over 500,000 rounds through it and a stock literally held together by electrician’s tape, yet it was still on the job. The 680s come in 12, 20, 28, and .410 on scaled frames, in all levels of decoration. A 687 Silver Pigeon III is my day-in, day-out pheasant gun, and really, there is no reason for me to ever shoot any of my other guns. The safety buttons on Berettas can be sticky, but that’s the only problem I have with them, and an inexpensive trip to the gunsmith solves it.

The 680s have recently been replaced by the 690 series, which feature improved wood and internal barrel dimensions but otherwise are largely the same, which is a good thing, as the 680 wasn’t broken and did not need fixing.

Having gotten his start in the hardware business, Charles Parker began making guns for the Union Army during the Civil War. In 1868 he and his sons founded the Parker Brothers Gun Company in Connecticut to make shotguns. During the first thirty years of the 20th century, Parker produced some of the best double guns ever made in the United States, from the workingman’s “Trojan” up to ornate, high-grade models.

Recognizable by the slotted screw over the hinge pin, Parker guns were built on different frames for different purposes. You could buy a heavy Parker for waterfowl, or a lightweight model for upland hunting. Twelve-gauges, for instance, were usually made on number 1, 1 ½, and 2 frames, with 2 being the heaviest.

Parker sold out to Remington in 1934, and Remington made them for a few years. But Parker gun sales suffered during the Depression, and WWII finished them off, as Remington transferred the last Parker workers to wartime production.

A modern classic upland semiauto, Benelli’s Ultralight weighs just 6 pounds in 12 gauge, thanks to a shorter magazine tube, a 24-inch barrel, and a lightweight carbon fiber rib. This is the gun you want when you have to walk miles between birds, but still need the punch of a 12-gauge when the time comes to shoot. The UltraLight has attained cult-like status among semiauto-loving bird hunters, and for good reason.

Like all Benellis, it’s an inertia-operated gun, making it extremely reliable in any weather condition. You can buy a 12-gauge with a 26-inch barrel if you want a little more heft and discipline in your swing, or you can choose the even lighter 20-gauge model.

The British best game gun, a sidelock double made to measure, represents the peak of the upland gun maker’s art. It’s efficient, it’s deadly as it is beautiful, and it costs many times more than most of us would ever be able to spend on a gun. Fortunately, gun makers in Spain’s Basque region learned to copy British best guns at a fraction of the cost starting in the 1950s. Of the great Spanish gunmakers, only AyA is left making double guns today. Their Number 1 and Number 2 sidelock guns are gorgeous takes on the famous English Holland & Holland shotgun. They cost about a tenth the price of a Holland or a Purdey, which is still a lot, but at least moves them out of the “wildest dream” category and into the “plausible dream” category.

Honorable mention must go to the Browning BSS sidelock, another copy of the Holland, but this one made in the Japanese Miroku factory from 1983 to 1988. Today it costs over twice what it did in the 80s (a mere $1500 then), but it’s still a bargain if you can find one of the 1200 or so that were made.

Introduced in 1977, the Ruger Red Label was made in the United States and inspired a rabid following for what is, in reality, an overweight, often poorly finished O/U. I can say this, having owned four of them. The exception is the 28-gauge, which was built on a trim, scaled-down frame. After making clunky 12s and 20s, Ruger got the 28-gauge exactly right. It weighed under 6 pounds, yet, with 28-inch barrels, it swung with more authority than you would expect from a featherlight gun. It was that rare gun that was as easy to shoot well as it was to carry.

Mine, like many Red Labels, had a bad wood-to-metal fit, which eventually soured me on the gun. I sold it and should have kept it, because while it wasn’t cosmetically perfect, it was full of inner beauty in the field. A couple of years ago I was able to pick up a Rizzini BR 110 in 28-gauge with 30-inch barrels that comes very close to approximating the wonderful handling of my old Red Label.

Based on the Remington Model 17 pump designed by John Browning, the Ithaca Model 37 featured bottom-ejection that kept debris out of the action and also made it a preferred gun of left-handed shooters. Despite its all-steel receiver, the 37 made up into a lightweight gun, and it became a favorite among upland hunters who like a pump or couldn’t afford a fancy double for the grouse woods. It was also a standard-issue riot gun in many police departments for years, which speaks to its reliability. Ithaca went in and out of business many times, but over two million have been produced, and the guns are still made today in Sandusky, Ohio.

Introduced in 1912, the Winchester Model 12 was, in the opinion of many, the finest pump gun ever made. It combined a slick stroke with double-gun-like pointability that made it a great gun for waterfowling, trapshooting, trench warfare, and upland hunting alike. A 20-gauge Model 12 with a short, ribless, cylinder-bore barrel was a lightning fast gun, and in the hands of the quail hunters who loved them, absolutely deadly on a covey rise. Over two million Model 12s were made between 1912 and 1964. Many of those are 12s with long barrels, but if you come upon a 20 or a 16, grab it, even though you’ll pay a little more.

John Browning’s great Auto 5 shotgun became a special favorite among bird hunters when the “Sweet 16” scaled down, 16-gauge version was introduced in 1937. Holding five 16-gauge shells, it offered plenty of firepower in a gun as light and trim as many 20 gauges. The Auto 5s long-recoil action always worked, although you had to get used to the unusual bouncing feel of the barrel moving back and forth as the gun cycled. Sweet 16s were made until 1975.

As great as the Sweet 16 was, Browning’s new Sweet 16 A5, introduced in 2016, wears its namesake’s familiar humpback profile and name extremely well. A super-light inertia gun, it has quickly become the choice of upland hunters who want a light semiauto and appreciate the ballistics of a 16-gauge load.

At the time of his death, John Browning was hard at work (“hard” was the only way he knew how to work) on an over-under shotgun. The only O/Us around in the 1920s were high-dollar guns, and Browning wanted to make a gun priced within the reach of average hunters and shooters. His son, Val, completed the design, which debuted in 1931. Like most John Browning guns, it’s complicated, with lots of parts. It also has a high, ungainly profile, which, according to shotgun theory, doesn’t point as naturally as a trimmer design. And yet, it’s a great gun, easy to shoot well, and it became extremely popular among the very customers Browning hoped would buy it: regular people willing to save up for a good gun. It was made until 1975, then replaced by the simpler, less expensive Japanese-made Citori, which earns an honorable mention spot on this list, as does the Winchester 101, Winchester’s Japanese-made answer to the Citori.

The Superlight version is the 12-gauge Superposed you want, as the standard models are heftier and better suited to waterfowl and target shooting. The 20-gauge Superposeds are just right for upland bird hunting, however.