The Story of The Remington 870

This year, the Remington 870 turns 70. Here’s where this stand-by pump-gun came from and why it’s become the best-selling shotgun of all time 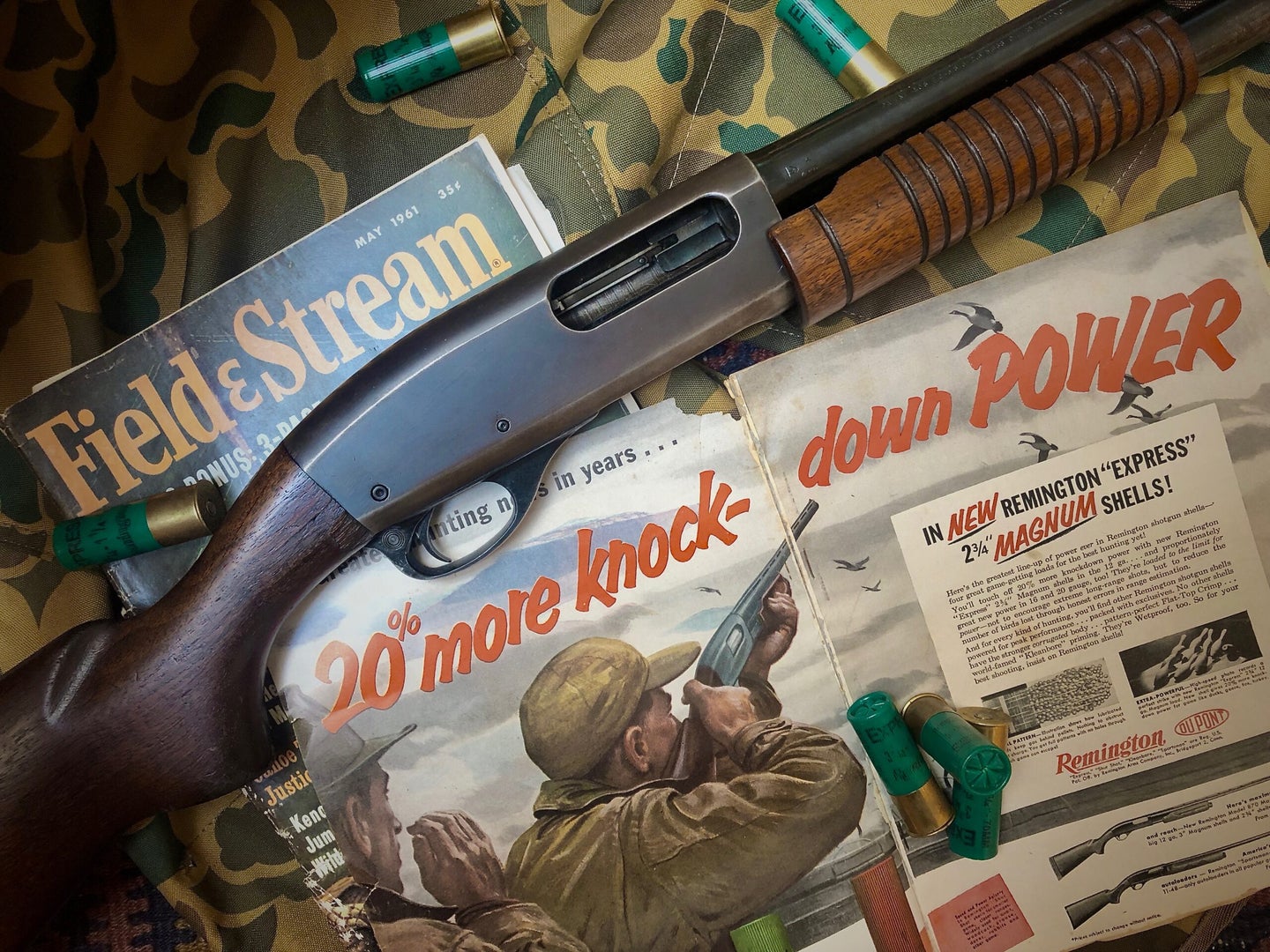 The Remington 870 is at home anywhere, from duck blinds to deer stands. Matthew Every
SHARE

It’s America’s pump gun. With over 11,000,000 made, Remington 870s are everywhere. My favorite place for an 870 is resting on my knee as I sit against a tree trunk in the turkey woods, but you will see them in duck blinds, cornfields, treestands, police cruisers, military armories, pickup trucks, and in the rack at gun clubs. In short, anywhere someone needs a rugged, no-nonsense shotgun, an 870 is probably there. Sometimes you’ll see 870s in places you wouldn’t expect to. Years ago I stayed at a mansion built amid three of the first Greentree reservoirs in Arkansas. It was a duck camp in the same way that a diamond is, technically, a rock. In the gun room, between a $100,000 Italian O/U for live pigeon competition and a .450 Nitro double rifle for dangerous African game, sat the 870 that the owner shot every morning of the 60 day season.

How this Classic Shotgun Came to Be

This year the 870 turns 70 years old, and it’s a perfect time to look back at a gun that shouldn’t have been great, but turned out to be a classic. In the 1940s, Remington already had a great pump gun: the Model 31. Made of machined and hand-fitted parts, the gun was so smooth Remington marketed it as the “ball-bearing repeater.” It came in both an all-steel version and a lightweight alloy-frame model, and many believe it was every bit as good as its main competition, the famous Winchester Model 12.

But, the Model 31′s slick-stroking action didn’t come cheap. It took a total of 536 machining operations to make one, and World War II had shown gunmakers that reliable guns could be made through more economical manufacturing methods. As Remington engineers drew up the Model 31′s replacement, they envisioned it as part of a “family” of shotguns and rifles that would lower production costs through the use of common parts, many of which would be stamped, not machined, to save even more time and money.

The 870 could have been a cheapened shadow of the Model 31, but the Remington design team made a number of smart decisions that resulted in an all-new, great, mass-produced shotgun. First, they based the 12-gauge 870 around the receiver of the 16-gauge 11-48 semiauto, assuring that the gun would be trim and light, while cutting costs by using a shared part. They connected the slide to the bolt with twin action bars in place of the single bar common to many pumps, reducing the possibility of twisting or binding the pumping stroke. They designed a trigger group that could be easily removed by popping out two pins, and a barrel that not only could be removed simply by unscrewing the magazine cap, but was also completely interchangeable without fitting.

The result was a gun that was light and lively, affordable, easy to take apart and maintain, reliable, and versatile. With one gun and extra barrels, you could use the same 870 for long-range ducks and close-range quail. Finally, the 870′s designers made sure the gun fit as many shooters as possible, stocking it with enough drop and a thin comb that let almost anyone get their face down on the gun easily.

The new 870 debuted in 1950, replacing The Model 31 (the 31 would come back ten years later as the inspiration for the Mossberg 500 but that’s a different story). The 870 came in two grades, a plain AP model and the deluxe, checkered ADL, and they came with both a wooden and ¾ pound steel “Vari-Weight” plug that allowed you to add heft to the gun if you wanted to use it for waterfowl or target shooting. The AP model sold for $69.95, about $15 less than a Winchester Model 12.

1950s Hunters and Shooters Celebrate the 870

Introduced in 12, 16, and 20 gauge from the start, as well as in Trap and Skeet grade, the 870 was an instant success. The trap version was first shown at the Grand American Handicap in the summer of 1950, and Rudy Etchen of Kansas used one of the new 870s to become the first shooter ever to break 100 straight trap doubles. While Etchen would earn the nickname “Mr. 870” for his accomplishments at trap and skeet, and the new pump would become a gun club staple, the 870 made its name in the field, garnering a reputation as the gun that always worked. It was the bottom-of-the-boat duck gun that functioned no matter how cold or muddy the hunt, and it would go on to serve under harsh combat conditions in jungles and deserts as well.

A 3-inch magnum 12-gauge joined the lineup in 1955, followed by the magnum 20 five years later, and 870s have been offered in a model for nearly every conceivable application. One of the most important introductions occurred in 1987, when the Express model came out. A budget version of the 870, it had a hardwood stock in place of walnut and a lower level of polish inside and out, but in all other ways it was identical to the original. An Express has been the first shotgun of countless shooters, and many of them have never seen any reason to shoot anything else.

Millions of 870s have rolled out of the same factory in Ilion, New York, where they’ve always been made. The 870 passed the 10,000,000-made mark in 2009, and it’s the best-selling shotgun of all time. You’ll find at least one in almost any gun cabinet. I currently have three, a 20-gauge Express and a pair of 3½-inch 12-gauge Super Magnums. The 20 is stock, but the two 12s illustrate an advantage of 870′s popularity: there are a ton of aftermarket parts available for them. I customized the one I use for turkeys with a Monte Carlo stock for scope use and a Timney 870 Trigger Fix kit to give it a rifle-like trigger pull. The other Super Magnum is a bad-weather waterfowl gun. It has an oversized safety, a metal magazine follower, a stainless magazine spring, a stronger police-model carrier spring, and a machined extractor. All those improvements, plus a Cerakote finish, make it even more durable and reliable than it already was, which, for an 870, is saying something. It’s certainly not saying anything new, though. Hunters and shooters relied on 870s for seventy years and it hasn’t let them down.

Used Remington 870s to Look For and Some to Avoid

Any time you make 11,000,000 plus of anything, there are bound to be some hits and misses. The following is a highly subjective list of 870s to seek out and to avoid. I have owned more than a few, shot a bunch more, and have my opinions.

Early 20-gauge 870s were made by putting 20 gauge barrels on 12-gauge receivers. Look for guns with “LW” stamped on the frame if you want a scaled-down, lighter 20.

Expresses of a Certain Vintage

Sometime in the early 00s, 870 Express quality control slipped. The most common problem you see in those guns is fired shells sticking in poorly finished chambers, most often with inexpensive target loads. Many 870 Express owners have their gun’s chambers polished, or do it themselves with fine steel wool and an electric drill, and the malfunctions usually go away. Replacing the metal injection molded (MIM) extractor can help, too.

Remington has ramped up QC efforts in the past few years, and the new Expresses are much better than those of ten or so years ago.

Remington 870s to Look For

In the 1980s Remington introduced a straight-gripped, 21-inch (some were 23-inch) barreled upland gun in 12 and 20 gauge called the Special Field. It made a great carrying gun for bird hunters who put a lot of miles on their boots. Some of the later ones had removable choke tubes, and I’d love to have one for turkey hunting.

One of the odder 870 variants was a single shot trap gun that incorporated a gas system. Gases bled from a port in the barrel pushed against a weight in the magazine tube, lengthening the recoil pulse and turning it from a sharp kick to a shove. I got to shoot one once, and the sensation was odd, because 870 trap guns usually let you know they’re there. Not this gun. It shot as softly as an 1100.

Currently in production, the SuperSlug has a heavy, rifled barrel pinned to its receiver for added rigidity, and it shoots slugs into groups as tiny as slug groups can be. The ShurShot stock, a kind of modified pistol grip, is comfortable to hold and has a comb the correct height for scope use.

For my money, the sweet spot in 870 production—if you want a modern, versatile gun—was the early 90s. When Remington first added RemChoke tubes in 1986, they beefed up the barrels, adding a bunch of weight to the guns. In 1992 they offered a slimmed-down Light Contour barrel that made the guns lively again. These early 90s guns are still made the way they used to make them, but you get choke tubes and the lighter barrel.

In 1963 Remington changed the finish on the Wingmaster, from a semi-satin with cut checkering to a glossy finish originally developed by parent company DuPont for bowling pins. They switched checkering to a pressed fleur-de-lis pattern. I thought they looked cheesy back then. And they do, but in a retro way that has aged extremely well. And, those old fixed-choke Wingmasters are beautifully made. The barrels are light and lively. The actions started out slick and have only gotten slicker over all those years of use. These guns come in both 2¾ and Magnum versions (the barrels don’t interchange between standard and magnum receivers). The magnums are getting a little harder to come by. If you see one, grab it. If it has a fixed Full choke, have a gunsmith open it up to about Modified and shoot anything you want through it.