How to Pick the Perfect Bullet for Deer Hunting 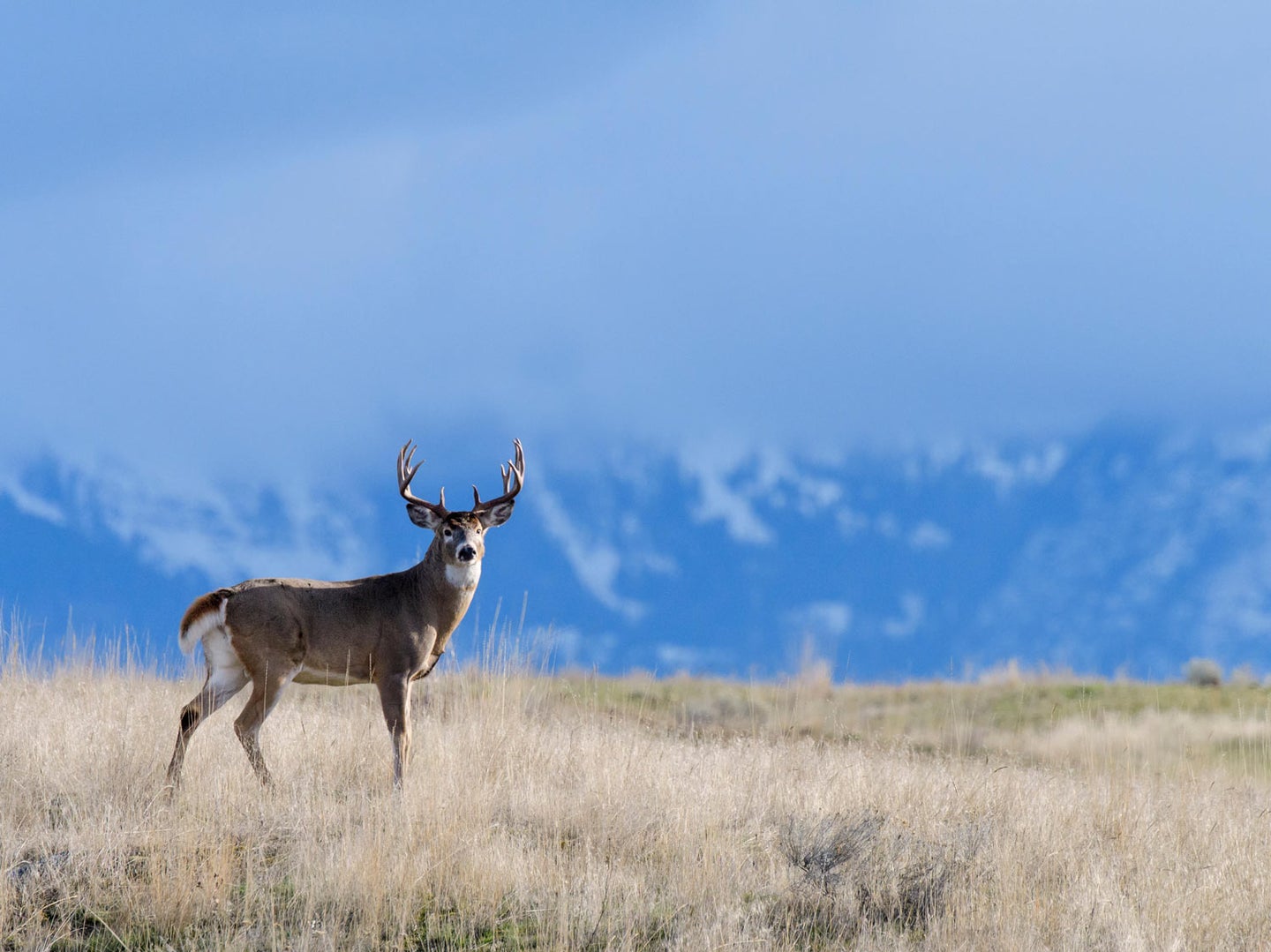 A western whitetail buck scans his surroundings, with the Rocky Mountains in the background. Andrew Kandel/Alamy
SHARE

The beginning of my education in deer bullets began in 1971 when I shot a mule deer with a 180-grain bullet from a .300 Weatherby at 200 yards or so. I hit him right through the lungs, and he ran off like a 100-meter sprinter. I was on an elk hunt when the deer presented itself, and the rifle was loaded with strong, slow-expanding slugs for 800-pound elk, not 200-pound deer.

He was in open country, so we found him, but he went farther than he should have. The experience taught me that deer, even though they range from 90 to 300 pounds, are basically fragile creatures, and whatever bullet you use, it had better expand instantly and against very little resistance.

There’s no way to predict what a deer will do when shot, and there’s no cartridge that will drop one in its tracks every time. Unlike elk, which will run for miles if you don’t do them enough damage, deer don’t typically go long distances. Usually 100 yards, and sometimes a lot less, does it for them. On the other hand, if not dropped quickly they may dive into cover so dense you’ll either never find them, or you’ll locate the animal only after it’s spoiled.

In South Carolina, I saw a whitetail buck run at the shot (not my shot) and vanish. Six experienced hunters searched for him for half a day, found no trace, and so we turned to Bobby the Testicle-Eating Lab. Bobby, who got his name because he was flung the mountain oysters as a reward when he found a kill, went to the deceased in something like 10 seconds. The buck had not gone 50 yards, but he had flung himself into a thorn patch so thick that you couldn’t see into it.

In Alabama, a friend shot a buck that took off running. Despite being a highly skilled tracker, he couldn’t find the deer. But he knew that he’d hit the animal fatally and didn’t give up. He found it after a day and a half.

So, the moral is, the more damage you do with the first shot, the better things are going to turn out, at least for you.

Don’t believe anything you read on the Internet. This is good advice generally, but applies to the power of ten when the subject is bullets. Years ago, I wrote the following about one of the most-maligned bullets of all, the Nosler Partition.

“The half-bright, the incurious, and the unobservant, behold a small hole going in and a small hole coming out and conclude that the bullet failed to expand, ignoring the havoc and destruction in between, which could only be caused by the violent expansion of the front half of the slug.”

A friend of mine at Nosler liked that so much that he sent me an elaborate bouquet at the office, causing no end of speculation about my social life.

The easiest solution is to look at the factory cartridge box and see if there’s a deer on it. Or better yet, a deer and an antelope. This is the sign of a quick expander, and it is what you’re after. Some ammo makers even say right up front, “For deer and thin-skinned game,” or words to that effect. These bullets have thin jackets, very often feature fracture lines near the nose to help it start expanding, and either a nylon tip or a lead tip with lots of lead exposed. Browning BXR Deer ammo, for example, says “deer” right on the box, and has a deer’s head looking at you. You can’t get much more direct than that.

What about accuracy? What about it? This is a large animal you’re shooting at, hopefully at some kind of sane range. You’re not at Camp Perry shooting at an X-ring the size of a tea cup at 600 yards. Buy several brands of ammo or load your own with either quick-expanding or premium bullets and find out which one your rifle likes best. That’ll be more than accurate enough.

In the end, it mainly boils down to how well you shoot. As Finn Aagaard put it, a bullet’s killing power depends almost entirely on where you place it. So choose wisely, and even more important, shoot good.

Over my many years of deer hunting, I’ve come to favor certain bullets, including both quick-expanders and premium bullets. Here they are, in no particular order.

Remington loads the Swift Scirocco in its Premier line.

Possibly the best all-around hunting bullet made. I have used it extensively, and it does it all.

Swift sells both Scirocco and A-Frame bullets for handloaders and loads them in their High-Grade ammunition.

I think the A-Frame the best of all the big-game bullets, and it works just fine on deer and spoils very little meat, even on close shots. It is not a long-range proposition.

In both its current extruded form and in its earlier screw-machine form, it’s been around since 1947 and was, for decades, the only completely reliable bullet around. I’ve never seen a Partition fail, and I’ve never known of a Partition that failed.

Federal loads all three of the Nosler bullets listed here, including the AccuBond shown, in 6.5 Creedmoor.

I’ve lumped these together because they’re similar. The Ballistic Tip caused rifle shooters to wet themselves when it came out because they had never seen a hunting bullet shoot with such accuracy. However, the Ballistic Tip is one of the more fragile bullets around, and it took people a while to adjust to this. Place one correctly and it’s like electrocution. Shoot badly and you will have a mess on your hands. The AccuBond is a stronger version of the Ballistic Tip, and I like it much better for general use. Both slugs are very good at long range.

Hornady sells SSTs for handloaders and offers a range of SST-loaded ammo.

Do not let its modest price fool you. This one operates at a very high level and is much like the Swift Scirocco in that it will do everything well, including long-range work.

I should include all the copper bullets I’ve tried, but I have more experience on game with this one than any other. It combines excellent expansion with incredible penetration. (Note that because they lack lead cores, TSX bullets are longer for their weight than conventional slugs. I use 150-grain TSXs in my .308 for deer, and they’re about the same length as 165-grain lead-core slugs.) The only thing they can’t match is the depleted-uranium anti-armor round in the M-1 Abrams 120mm main gun.

You know this Browning BXR ammo is for deer because of the buck staring at you on the box.

This is the company’s dedicated deer-and-antelope bullet, and I include it because the whitetail I shot with a BXR went down as though someone had dropped a safe on him. I’ve seen a great many deer hit the ground, but I’ve never seen one do it as violently, so I am intrigued. From my limited testing, it’s not the most accurate bullet out there, but who cares? Judging by the snuff film on the Browning website, my experience was typical. I’ll hunt with it any day.

With its large Extreme Tip, Deer Season XP is a quick expander through and through.

What sets Deer Season XP apart is a jumbo-sized polymer tip that is going to get this sucker down to business the millisecond it makes contact. That and the price—it goes for about $20 to $25 a box. Used as its maker intends, as a very quick expander, this is a fine tool for deer hunters—very accurate, loaded right up to snuff, and devastating on impact. If you want something similar that retains more weight after impact, look at Deer Season XP Copper Impact.