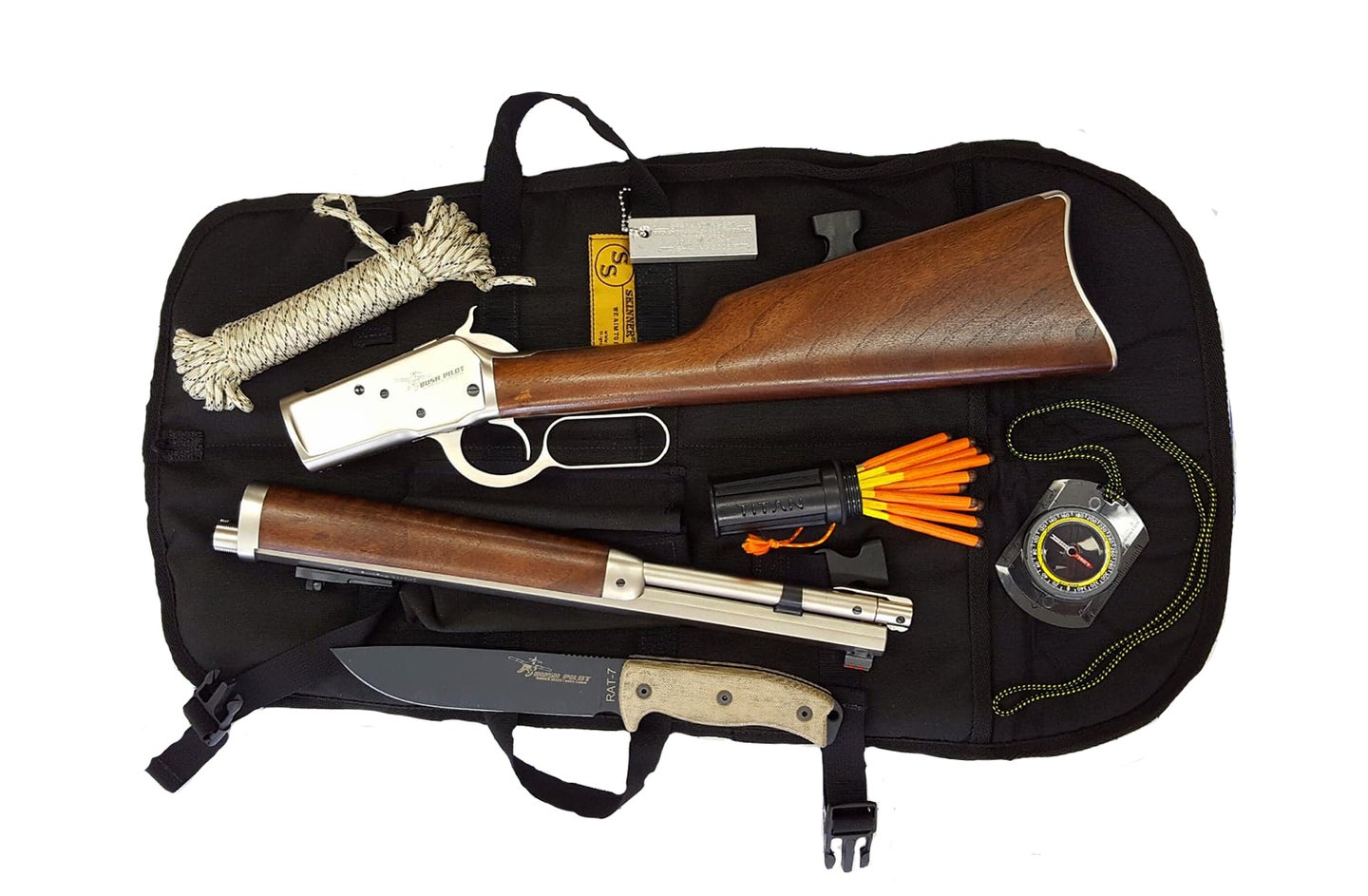 A camp gun is generally considered a gun kept handy for dispatching vermin and potting small game around camp. The notion being that for big game and predator defense, you’ll have a more powerful rifle available. Over the years a variety of guns have filled this role, but during the last half of the 20th Century, as guns became more specialized, we started to see manufactures offering purpose-built camp guns. Guns that were not only compact, but that could be taken down for easy storage and transport in a vehicle, canoe, or backpack.

Rimfires dominate this genre of firearms but in some instances, a camp might need a gun with a little more punch. The last thing someone wants to do is fend off a bear with a .22 rifle. So, the modern definition of a camp gun could be: A light, compact rifle, that can be broken down for easy transport, offering sufficient power to protect a camp and dispatch food, respective of the location and potential threats.

As broadly as that might be interpreted, there aren’t a lot of rifles that fit that description. And, while options might be limited, fortunately, they are good. Here are 10 camp guns ranging in price from $200 to $2,000. One of them should work for your camp, whether it’s on the back 40 of your grandfather’s farm in Nebraska, or in the wilds of wolf-infested Idaho.

Chiappa’s Little Badger Survival Rifle will not win you any shooting matches, but it is solidly in competition for the ugliest rimfire rifle ever created. However, at about $200 retail, it’s also the least expensive survival/camp rifle you’ll find. This break-action single-shot is available in .22 LR or .22 WMR. It weighs less than three pounds and is only 17 inches long when broken-down. The buttstock has a built-in shell holder, there are Picatinny rails just forward of the receiver for mounting accessories, and an optional handle/cleaning kit combination can be screwed into the receiver. It even has a threaded muzzle. I don’t think this is a gun anyone will brag about owning, but I’m betting it’s one they’ll be glad to have in their hands if things get ugly. Check availability here.

Developed in 1959 from the AR-5, a U.S. Air Force pilot/aircrewman survival weapon, rights to the Armalite AR-7 were eventually acquired by Henry Repeating Arms in 1980. It might be the most recognizable survival rifle of all time and has probably earned that reputation, if not in the real world, at least on the Internet. (James Bond even used one in the movie, From Russia with Love.) This eight-shot, semi-automatic rifle’s barrel and action can be stored in its hollow, impact and water-resistant stock. Takedown and assembly take only seconds and require no tools, and the receiver has a rail for scope mounting. Over the years, the AR-7 has been offered in several finishes but is currently available in either black, True Timber-Kanati, or True Timber-Viper Western camo. With street prices of less than $300, it’s hard to imagine any serious outdoorsman without one of these behind their truck seat. Check availability here.

For easy in-the-backpack transport, Marlin’s model 70 PSS Takedown—also known as the Papoose—seems to be the perfect option. The design has been around for more than 30 years and the rifle comes with a small spanner wrench to assist with takedown and assembly. This 3¼-pound, seven-shot, autoloader comes with its own zippered and padded case that floats in case it falls out of your canoe. All of the metal surfaces on this rifle are nickel-plated to help with corrosion resistance, and the stainless-steel barrel measures 16 ¼-inches long. The rifle is even fitted with sling swivel studs. The Papoose can be assembled and taken apart in a matter of seconds and with an across-the-counter price of about three bills, it won’t make your wallet weep. Surprisingly, ProMag offers a 25-round magazine for this jewel. Check availability here.

Ruger’s 10/22 is undeniably the most successful rimfire rifle ever manufactured. It is offered in countless variations and there are more aftermarket accessories for the 10/22 than there are Justin Bieber fans. Including distributor exclusives, Ruger currently offers 15 different takedown versions of the 10/22 with a variety of stocks. The basic model features a stainless steel finish and comes with a carrying case. Open sights and a flush-fitting 10-round magazine are standard, as is a Weaver-style scope base. From the standpoint of dependability, accuracy, practicality, and cost, the Ruger 10/22 Takedown is, without question, the best rimfire camp gun in current production. If you do not own one already, don’t tell anyone, they’ll only think less of you, and a trip to your therapist might be in order. Check availability here.

Read Next: A Backcountry Bird Gun

5. Marlin 39A TDS Take Down System

My pick of the litter when it comes to take-down camp guns is based on the iconic Marlin model 39A. It is the model 39TDS (Take Down System)—a carbine-sized lever-action chambered for the .22 LR. It was manufactured from 1988 until 1995, has a 16¼-inch barrel and weighs only 5¼ pounds. Yes, this magnificently compact, light, and accurate rimfire has been discontinued, and finding one for sale on the used market does not happen often. Folks tend to not want to get rid of them. Not only is it an easy packing camp, trail, and survival rifle, it’s a perfect first rifle for a young hunter. For years I’ve begged the executives at Marlin to bring it back but have only been met with blank stares and excuses. Maybe, if you have enough money, the Marlin Custom Shop could be persuaded to build you one. Check availability here.

Browning’s model SA 22 might be way too elegant to be considered a camp gun, but it is just too reliable, handy, and accurate, not to be included on this list. The least expensive Grade I is probably best suited for camp duty. It weighs in at five pounds and is about a meter long. It also can be broken down in just seconds. Unlike most take-down rimfire rifles, the Barrel on the SA 22 is almost 20-inches. This increases the sight radius and helps you shoot more accurately. The SA 22 is uniquely loaded through the buttstock and just as oddly, ejects the empty cases from the bottom of the receiver, which is grooved to accept scope mounts. If you have $1600 to spend, get the Grade VI version. It’ll bleed your wallet, but you’ll have the coolest rimfire at the campfire. Check availability here.

It’s been suggested that a shotgun might be the most versatile gun you can own. However, true rimfire aficionados will argue that point. Maybe the solution to versatility is a gun that can fire rimfire ammo and shotgun ammo. The Savage 42 Takedown is a break-action, takedown gun with over/under barrels. It is less than a meter long, weighs only six pounds, and is available in two configurations; .22 LR and .22 Winchester Magnum. Both have a bottom barrel that fires .410 shotshells. This gun breaks down with the simple push of a single button and comes with a bug-out bag for easy transport. Throw a handful of rimfire rounds, a couple .410 slugs, and a box of shotshells in the bag, and you’re ready for just about anything. Well, almost anything. It won’t win any beauty contests; this gun is as ugly as it is useful. Check availability here.

Outdoorsmen often think of camp guns as guns that’ll be used to feed themselves, dispatch vermin, and maybe provide some protection from four-legged predators. However, a camp gun might very well be needed for defense against two-legged predators, too. In the tradition of the discontinued Marlin Camp Carbine, Ruger is offering the PC Carbine, which is a compact, take-down, semi-auto rifle, chambered for either the 9mm Luger or .40 S&W. Ruger offers 19 versions with a wide variety of features, the lightest of which weighs only 6.8 pounds and is shorter than a yardstick. These carbines also accept either Ruger SR-Series, Glock, or Ruger American pistol magazines, which makes them a great companion to one of those sidearms. Check availability here.

Lever-action rifles make great camp guns because they can be had in a variety of chamberings from .22 LR to .45-70. Wouldn’t it be nice if you could turn your favorite lever gun into a take-down? Well, you can. Dove Custom Guns will turn any Marlin lever-action rifle into a take-down lever-action rifle for a thousand bucks. Dove Custom calls these creations “Appalachian Scouts” and the work includes the take-down conversion and a scout scope rail for the barrel. Additional features such as XS Sights, an action job, custom stocks, and Cerakote finishes are available at an extra cost. $1000 on your rifle; www.doveguns.com

A camp gun in Alaska ought to be a bit different than a camp gun in Rhode Island. While a .22 rifle can do a good job of feeding you just about anywhere on the planet, in some places you might need a camp gun to keep from becoming food yourself. The Skinner Sights Bush Pilot Carbine Survival Kit includes just that sort of rifle. There are two versions to choose from. The Winchester 1892 clone is available in .357 and .44 Magnum, and the Winchester 1886 clone comes in .45-70. Both takedown rifles are fitted with skinner sights and come in a padded case. What sets them apart are the extra goodies included, like an Ontario RAT-7 knife, fire starter, 50 feet of para-cord, stormproof matches, a compass, and a space blanket tube tent. $1499 to $1850; skinnersights.com

Outdoor Life is dedicated to covering safe and responsible gun ownership for hunting, recreation, and personal protection. We participate in affiliate advertising programs only with trusted online retailers in the firearms space. If you purchase a firearm using the links in this story, we may earn commission