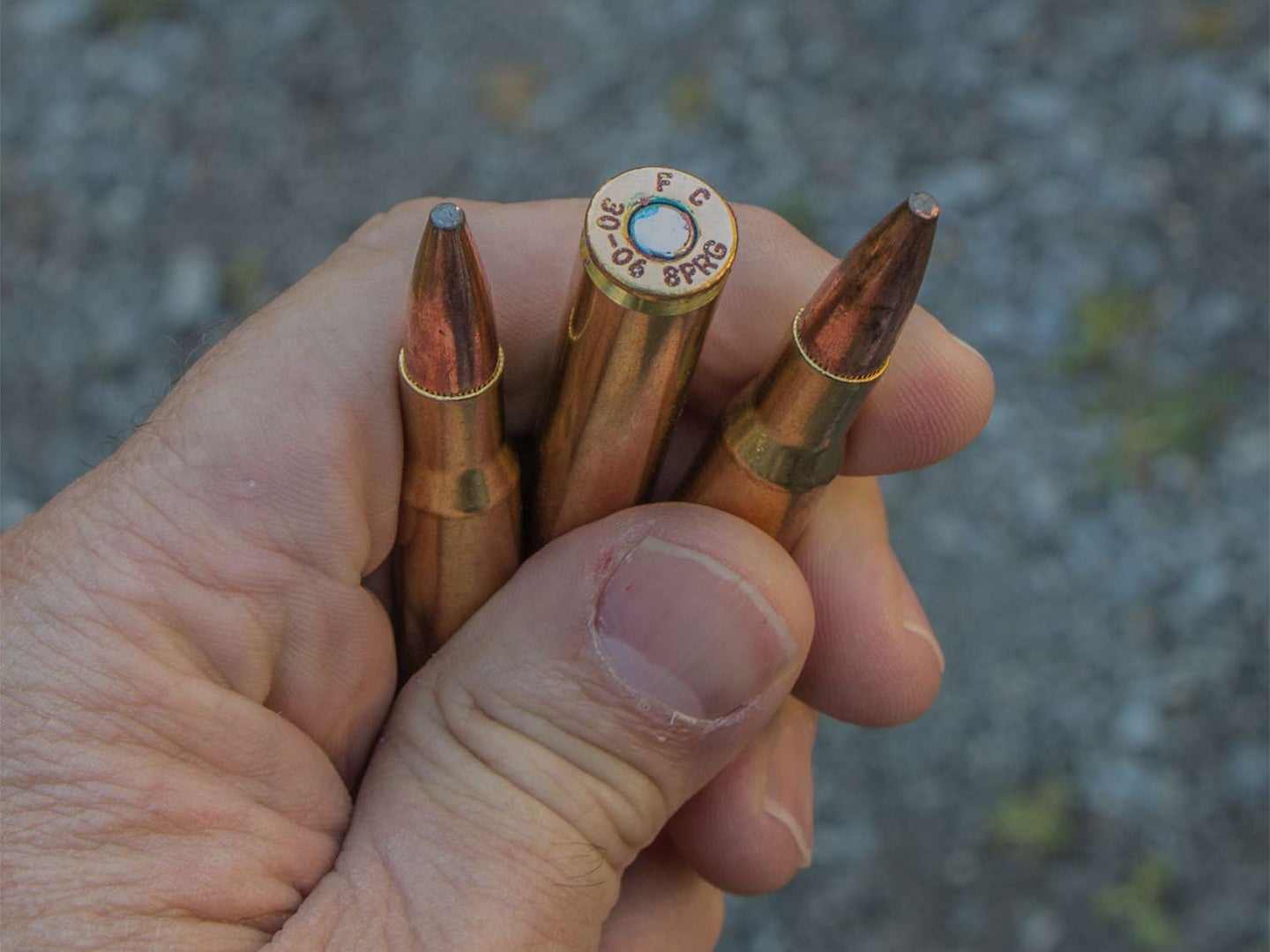 Even with the introduction of the .308 Winchester in the early 1950s and the meteoric rise of the 6.5 Creedmoor more recently, the 115-year-old .30/06 Springfield remains one of the top-selling—and best—all-around cartridges for big-game hunting. It has and will continue to do it all, from Africa to Alaska. The veterans of two World Wars clung to the cartridge because it served them well when everything was on the line. And their sons and grandsons still treat the .30/06 with reverence because they grew up learning what it was capable of.

The original .30/06 loading fired a 150-grain bullet at 2700 fps, which was enough for the likes of Teddy Roosevelt and Stewart Edward White to shoot, well, everything. With today’s wide range of available loadings and much-improved bullets, the ’06 still does it all, only better, with improved accuracy and terminal performance. That doesn’t mean, though, that you should just grab any box off the shelf; you need to pick the right load for your specific purpose and needs. Here are the five best .30/06 loads for everything from deer and hogs to African game.

If your deer rifle is a .30/06, you don’t need deep penetration to get the job done. Just about any .30/06 hunting load will punch deeply enough to dispatch any whitetail or mule deer walking this Earth. What can help you put a deer down fast—before it gets on the neighbor’s property or into that briar thicket—is a bullet that expands violently and creates a massive wound channel. Few loads for the .30/06 will do that as well as the 150-grain Federal Fusion. With a copper jacket that is electro-chemically applied to the core, this bullet will hold together even after hitting bone, yet it will deform as wide as 2.5 times the original bullet diameter. For deer, pronghorn antelope, hogs, or really any big game that weighs less than 500 pounds, this is a stellar load.

Elk are tough animals, and a bull moose can push the scales to 1,000 pounds. The .30/06 is plenty of gun for either, but it requires the right bullet to be effective. You want something that will expand enough to damage lots of tissue and yet will also penetrate deeply—up to two feet being ideal. The Nosler Partition was made for this kind of job. During penetration, it opens quickly and will sometimes shed its front core creating havoc; meanwhile, the bullet’s in-tact rear core helps keep it driving though for deep penetration. Nosler’s 180-grain Partition load for the .30/06 is available from Nosler and Federal; no matter which company loads it, it’s big-bull medicine, just as John Nosler intended when he introduced the bullet more than 70 years ago.

In Africa if you draw blood you pay, whether your animal is found or not. This means you need to make every shot count. Not only must the bullet hit the right spot; it also needs to deliver lethal terminal performance. This Winchester load utilizes the Nosler AccuBond Long Range bullet, which delivers extreme precision at distance and massive tissue destruction. For plains game as small as springbok, which may require shots at very long distance, to antelope as large as eland, which are as big as a bull moose, this load makes for short blood trails and a full skinning shed.

This is designed to be the one load that will do anything that the .30/06 is capable of doing—which is a lot. The 168-grain Barnes TTSX bullet is loaded for the .30/06 by several manufacturers, but the Buffalo Bore offering will give you 3000 fps out of a 24-inch barrel. You can expect double-diameter expansion and almost 30 inches of penetration. Mono-metal bullets like the Barnes Tipped Triple Shock thrive on velocity, and that’s a hallmark of Buffalo Bore ammunition. It will zip through a whitetail deer from any angle. It will also give all the penetration needed to anchor a bull moose, elk, or grizzly, out farther than most hunters have any business shooting.

Some argue that if your rifle kicks too hard, you should get a rifle chambered for a lesser cartridge. That’s good advice, but what about the hunter who has only one rifle and is recovering from shoulder surgery? Or, what about a parent that wants to take his son or daughter hunting but does not have enough money to buy another rifle? This is exactly what the Hornady Custom Lite loads were created for. This load utilizes a 125-grain SST bullet with a muzzle velocity of 2700 fps, essentially turning the .30/06 into a .300 Savage, which was and still is a fantastic big-game cartridge. Recoil-wise, this load delivers about 25 percent less recoil than a full-power 150-grain .30/06 load, with a bullet that will deliver excellent terminal performance.