The 10 Best Shotguns for Hunting Rabbits

Whether you are stomping brush piles or hunting with dogs, here are the best rabbit shotguns for every budget 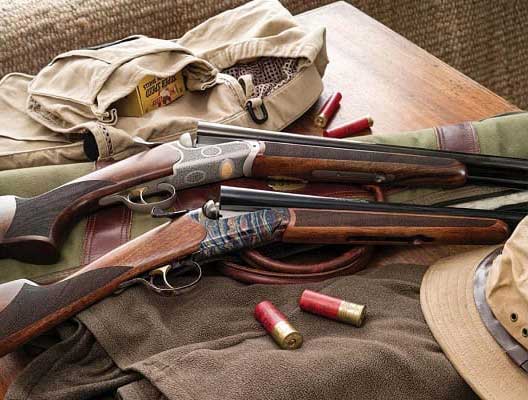 The Bristol Silver, above, and Bristol SxS offer great looks at a nice price. Models start at $1,000. TriStar
SHARE

Rabbit hunting offers plenty of late-season action for small-game hunters. Finding bunnies involves covering a lot of ground, so a lightweight scattergun is preferable. Fortunately, the thin skin of rabbits makes them ideal quarry for the smaller gauges, so you can take advantage of the weight savings that smaller-bore guns typically provide. Here are 11 great rabbit guns for every budget, including a lever gun that kicks the fun up a notch.

Rabbits rarely require a follow up shot to finish them off. In fact, I’ve picked up rabbits on which I couldn’t find a single pellet hole, leading me to believe I scared them to death. So, you can feel confident heading afield with a single-shot shotgun. One of the most common and proven single-shots—and the one you’re most likely to run across in pawnshops and big-box stores alike—is the H&R. Harrington & Richardson has been producing its well-known single-shot shotgun, under various names, for the last 100 years or so. The latest model brings back the Topper moniker and adds some refinement not usually found in the line. Available in 12- and 20-gauge, both sporting a 28-inch vent-rib barrel and 3-inch chamber, the Topper Deluxe Classic has a nickel-plated receiver and checkered walnut stock, for a little added class. Of course, you can scour local gun shops and pick up an older, used model on the cheap, and the gun’s robust construction and simple workings means it’s apt to be in fine working order.

Pump-action shotguns are the utility infielders of the hunting world, able to fill whatever role is needed. Few guns have been filling as many roles, for as long, as the Mossberg 500. The venerable pump served in military, police, and backwoods duty since it was first introduced in 1960. In 20-gauge, the 500 makes a fine rabbit gun. The downsized receiver of the 20 is about a half a pound lighter than the 12, making the gun easier to tote over long distances than its larger sibling—though at 7 pounds, it’s no flyweight. Dual extractors, twin action bars, and an anti-jam elevator ensure that the 500 cycles no matter what, but they do add a little weight. The top mounted safety provides ambidextrous operation, and a full-length vent rib keeps you on target. The length of pull on the 500 All Purpose Field is a little under 14 inches, so it should fit smaller-framed shooters and provide plenty of room for warm clothes on late-season bunny hunts.

If you’re recoil-adverse, this may be your rabbit gun. Beretta is king of the soft-shooting semi-autos, employing a gas system that siphons off plenty of recoil before it gets to your shoulder. The company’s Kick-Off technology further lessens the thump via hydraulic dampers in the stock, eating up about 50 percent of the kick. The A400 Upland manages to hide this system in a beautifully figured walnut stock, complimented by a matte-nickel receiver with engravings of flushing gamebirds. Both the 12- and 20-gauge versions have 3-inch chambers and shoot 2¾- and 3-inch shells without any adjustments. And the A400 weighs only about 6½ pounds in both gauges, making it easy to carry all day.

I love the way a side-by-side swings. Once the barrels are set in motion, they seems to want to stay in motion, pulling themselves through the target. While most modern side-by-sides command top dollar, the new TriStar Bristol SxS comes with a modest price tag and a fit-and-finish you’d expect to pay much more for. The new gun comes in two trims, Bristol and Bristol Silver, each in 12-, 20-, 28-gauge, and .410 bore. The smallest of the bunch, the .410, weighs just a hair over 5 pounds, so you’ll hardly notice it even on all day hunts. The 20-gauge is a shade under 6½ pounds. Fans of straight-wristed shotguns should look at the Bristol trim, which features a select Turkish walnut English stock and color case hardened receiver. The Bristol Silver is built with a nickel-finished receiver with laser-engraved details, 24K gold inlay, and a pistol grip stock that is more familiar to hunters here in the States. All models have a single, selective trigger.

Benelli is known for their waterfowl guns, but their upland shotguns shouldn’t be overlooked. If you want to blow a few mortgage payments on the Ferrari of the upland world, break out three grand and order the Ethos Upland from Benelli’s Performance Shop. That beauty comes tuned with a host of custom features that guarantee the best possible pattern on running rabbits, fast flushing grouse, and erratic timberdoodles. If your budget is more modest, but you still want a reliable semi that you can tote all day, pick up a Montefeltro in 20 gauge. This inertia-operated autoloader points in the same way that makes Benellis in general so popular in the field and on the clay range. Even with a 26-inch barrel, the Montefeltro only tips the scales at 5.6 pounds, which makes it easy to carry as you stomp through the brush. And with an anodized receiver, blued barrel, and walnut furniture, it looks good, too.

You probably don’t want to drag a high-end, fancy over/under into a briar patch, but you won’t mind kicking brush piles with Franchi’s Instinct L in hand. While the Instinct L has a fit-and-finish that rivals some of the upper echelon over/unders, it wears the price tag of a field gun. The A-grade satin walnut stock is cut in a Prince of Wales configuration, with the gentle curves offering a nice compromise between straight-wristed guns and pistol grips, while placing your finger in the ideal spot for the single selective trigger. Available in 12, 20, 28, and .410, the Instinct weighs in at only 6 pounds in the smaller gauges. The 28 seems to handle exceptionally well, so if you’re interested in a sub-gauge o/u for bunnies, the Instinct L is a great choice.

It’s hard to think of rabbit hunting without the Browning Auto 5 coming to mind. Designed by John Moses Browning in 1898, the original Browning Auto 5 was the first mass-produced semiautomatic shotgun, with a production run that lasted nearly a century. (The Auto 5 was so prevalent that it made its way into two Turnpike Troubadours songs, and was so beloved that it was one of the only items rescued from a house fire in one tune.) The Auto 5 was produced in a variety of gauges, but the 16 became a favorite, earning the moniker “Sweet Sixteen.” A 16-gauge offers an excellent compromise in the uplands, with a payload similar to a 12, and recoil and heft closer to a 20. Browning revived the A5 in 2014, and added a “Sweet Sixteen” model in 2016. This helped renew interest in the 16-gauge and gave ammo makers a reason to expand production, making it easier to find shells. Though the new model has the signature humpback design, it ditches the long-recoil action of the original in favor of a modern short action. If you prefer the original, go check granddad’s barn—you might get lucky.

At about 7½ pounds , Henry’s Lever Action .410 Shotgun isn’t especially lightweight. But the extra pound is well worth it for the smiles this shotgun delivers, providing classic lever-gun fun in a package that shoots 2.5-inch .410 shells. The fast-handling design lets you get on rabbits quickly, and the gun fits well in a saddle scabbard if you happen to be lucky enough to be following dogs on horseback. This lever gun has recently been updated with the addition of a loading gate but is still available in the two barrel lengths of its predecessor. The 24-inch-long version swings better on moving game, with a brass front bead and interchangeable Invector-style chokes. If you prefer a handier, more compact package for use in tight brush, the 20-inch model fits the bill. The shorter version does not offer interchangeable chokes, but for close shots in the thick stuff, the factory cylinder-bore constriction is likely the best bet anyway. Adjustable semi-buckhorn rear and brass bead front sights make this one a viable slug gun when deer season rolls around.

If you like the way an over/under handle but are hesitant to hunt with one because you’re really hard on your guns, take a look at CZ’s All-Terrain series of shotguns, each of which has a protective Cerakote finish on barrels and receiver to ward off the elements. If you spend the majority of your rabbit hunts fighting through thickets in terrible weather, this just may be just the gun for you. The Upland Ultralight All-Terrain in 20-gauge makes a dandy rabbit gun, with 28-inch tubes and a total weight of less than 6 pounds. Another unique feature of the All-Terrain series is the rare-earth magnet placed on each ejector. This holds shells in place when the chamber is open, even if the gun is turned upside down. You’ll never see your shells tumble out when you pass your opened gun over a fence line again. A 3-inch chamber, single selective trigger, manual tang safety, and checkered Turkish walnut stock round out the features.

Marble’s introduced its Game Getter in 1908. The combination rifle/shotgun was intended to provide hunters with the correct projectile to take down whatever animal they happened across by simply sliding the striker to the barrel they wanted to fire. The idea proved so popular that other American companies began manufacturing their own combination guns. In 1938, the Model 22-410, a .22LR over .410 bore combo, started rolling off the Stevens’ assembly line and into the hands of US Army Air Corps service members for use as a survival rifle for use in World War II. In 1950, Stevens stopped producing the 22-410 and Savage picked up the torch, renaming the firearm the Model 24. The Model 24 remained in continuous production in a variety of calibers and gauges until 2010, when it was discontinued. (Used models still make a dandy—and sought-after—small-game gun.) But the design wouldn’t stay dead for long, and Savage resurrected the combo gun with the 42 Takedown. The double-barrel break-action is hard to beat for still-hunting rabbits, allowing you to take longer pokes at stationary rabbits with the .22LR barrel and still pull off snap shots on running bunnies with the .410. The Model 42 also makes an excellent truck gun, breaking in two and packing down into an included storage bag.