When Early-Season Bucks Vanish, Here’s Where to Find Them

Everything you need to know about making the most out of an early-season, staging-area hunt 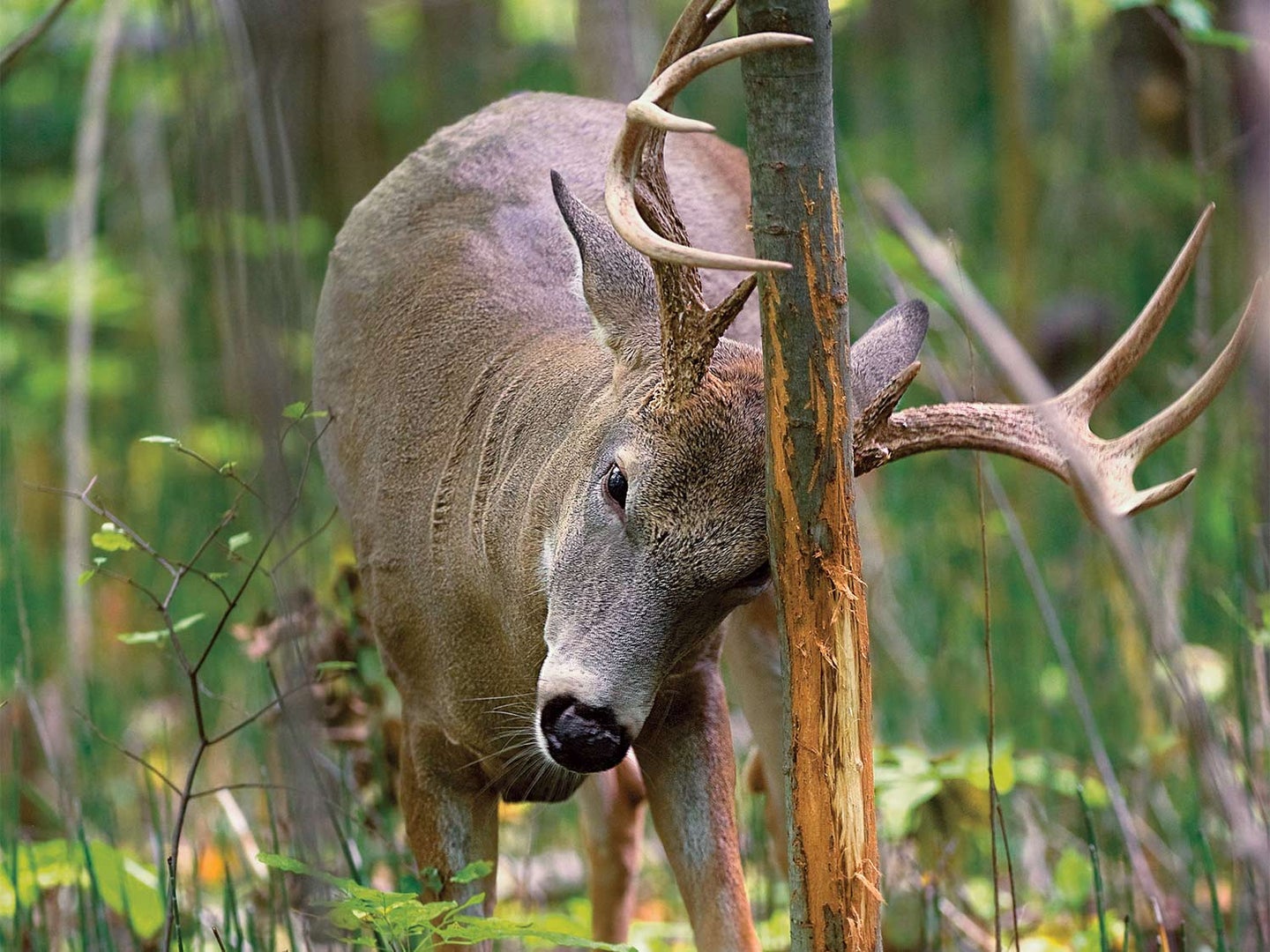 You couldn’t miss this buck, and not just because he was hitting the same feeding area day after day. There was the rack. The landowner described the buck’s velvet antlers, which he could see from the roadside most evenings, as “a chandelier in the sunset.” Huge whitetails inspire all kinds of exaggerated similes, but I got the point. I was dealing with a buck of a lifetime.

It seemed like one of those classic early-season slam-dunk scenarios. Through the late summer, the giant 10-point was a set-your-watch regular at the southeast corner of a secluded beanfield. All I had to do was pick the right stand tree, quietly hang a set, and keep it together when the wall of tines came bobbing in.

But the buck disappeared just before the September archery opener. The landowner delivered the bad news. “I’m mystified,” he said. “Eight out of 10 evenings, I’d spot him in that same corner. But in the last seven days… Well, I just don’t get it.”

Why Big Whitetail Bucks Hang Out at Staging Areas

I wasn’t sure if I got it either, but I had a suspicion. Instead of waltzing into the beanfield like he owned the daylight rights, the buck was now dawdling at a staging area—a safe spot just off the food source, where he stopped to rub and scrape and, most important, not step into the feeding area until after dark. It’s classic big-buck behavior, especially when summer yields to fall.

Deer know they’re vulnerable at food sources, and so the savvy ones spend some time just off the feed, scoping out the situation. They may do this well before dusk during summer evenings and pop out with plenty of daylight. But when fall arrives and the once-lush leaf cover begins disappearing, bucks feel more vulnerable and will often wait longer. Then there’s velvet shed, which spurs hard-antlered bucks to start rubbing and scraping, and that field-edge cover is the perfect place for it. Increased human disturbance just ahead of and at the start of hunting season is yet another reason for a buck to hang back until dark. This staging behavior isn’t limited to bucks using fields and food plots either. An oak stand or clear-cut may seem like a protected food source, but I’ve seen big-woods bucks stage off these areas too.

How to Find a Whitetail Deer Staging Area

Finding a staging area is pretty simple. Just walk food-source entry trails back into the woods a bit, and you’ll typically find an area of dense cover—saplings, brush, and maybe some soft-mast trees with low-hanging limbs—within the first 20 to 40 yards, though it may be twice that. The real tip-off is rubs and scrapes, and neither of these have to be big to be promising. With velvet shed just completed and the rut weeks away, bucks haven’t yet gotten serious about rubs and scrapes, but they’re definitely establishing and working them now.

While nailing down a staging area is exciting, it’s no guarantee of anything. These are places where bucks feel safe, and meddling with them is risky. I save this tactic for when I’m after a particular buck that I’m convinced is hanging back. I know that if I don’t kill the buck in two or three carefully executed hunts, I’ll likely have bumped the deer and possibly ruined the spot. So I’ll often creep in toward a staging area, sitting close to the food at first, then gradually moving closer. I don’t even try it if I don’t have safe entry and egress. If I can arrange to have someone pick me up in a truck at dark, I figure I’ll be O.K. for a return sit the next evening.

I didn’t need a chauffeur for the beanfield 10-point. I’d actually found his staging area the spring before while turkey hunting. Three small ridges joined at an intersection 60 yards from the very field corner that the buck had been hitting all summer. When I found the spot in April, all the rubs and scrapes and trails from the previous fall were still visible and led me to a perfect bur oak smack in the hub of all that activity. I hung a stand and brushed out shooting lanes, and then, without a thought or a plan, I walked away.

Five months later, when the big buck pulled his disappearing act, my mind raced to that bur oak. I waited for a perfect wind, and then I sneaked in to the set, thinking about the surprise I would have in store for the giant that had probably been walking past the stand for weeks. All evening, does and small bucks coursed through the staging area. Then I heard a scuff in the leaves.

Read Next: Yes You Can Tag a Great Early-Season Buck on a Morning Hunt

I’d seen lots of good bucks before, and I’d arrowed my share too, but nothing prepared me for the fence of bone-white tines coming my way through the prickly ash. I gasped as the adrenaline dump landed in my quivering knees. If I’d had to shoot the buck right then, it would have been one of those epic, humiliating misses that haunt a bowhunter forever.

Luckily, the giant stopped to work a scrape. After a while, he took a few steps down the trail, then tensed when his nose caught a whiff of something not quite right. For the longest time, he stood stock-still, only 15 steps away, with a basswood blocking his vitals.

Might as well soak this in, I told myself, because you may never see a bigger whitetail from a stand. Somehow that realization relaxed me, and my knees recovered.

Finally, the buck took a telltale step backward. Had he pulled a 180, he’d have walked away. Instead, he angled behind the stand on a trail I’d brushed out. As he did, I spun to my right and drew the recurve in the same motion. The beauty of instinctive shooting, when it’s right, is that it’s so fluid and thoughtless that it’s almost like you didn’t shoot the bow, and yet you’re watching the arrow arc perfectly toward your target—seeing it disappear into the rib cage of a once-in-a-lifetime buck.

Only seconds later, I heard the crash. And my knees started quivering again.