Are Sea Otters the Next Wolves?

As the marine mammal takes a bite out of the fishing industry, some are asking if it’s time to hunt otters 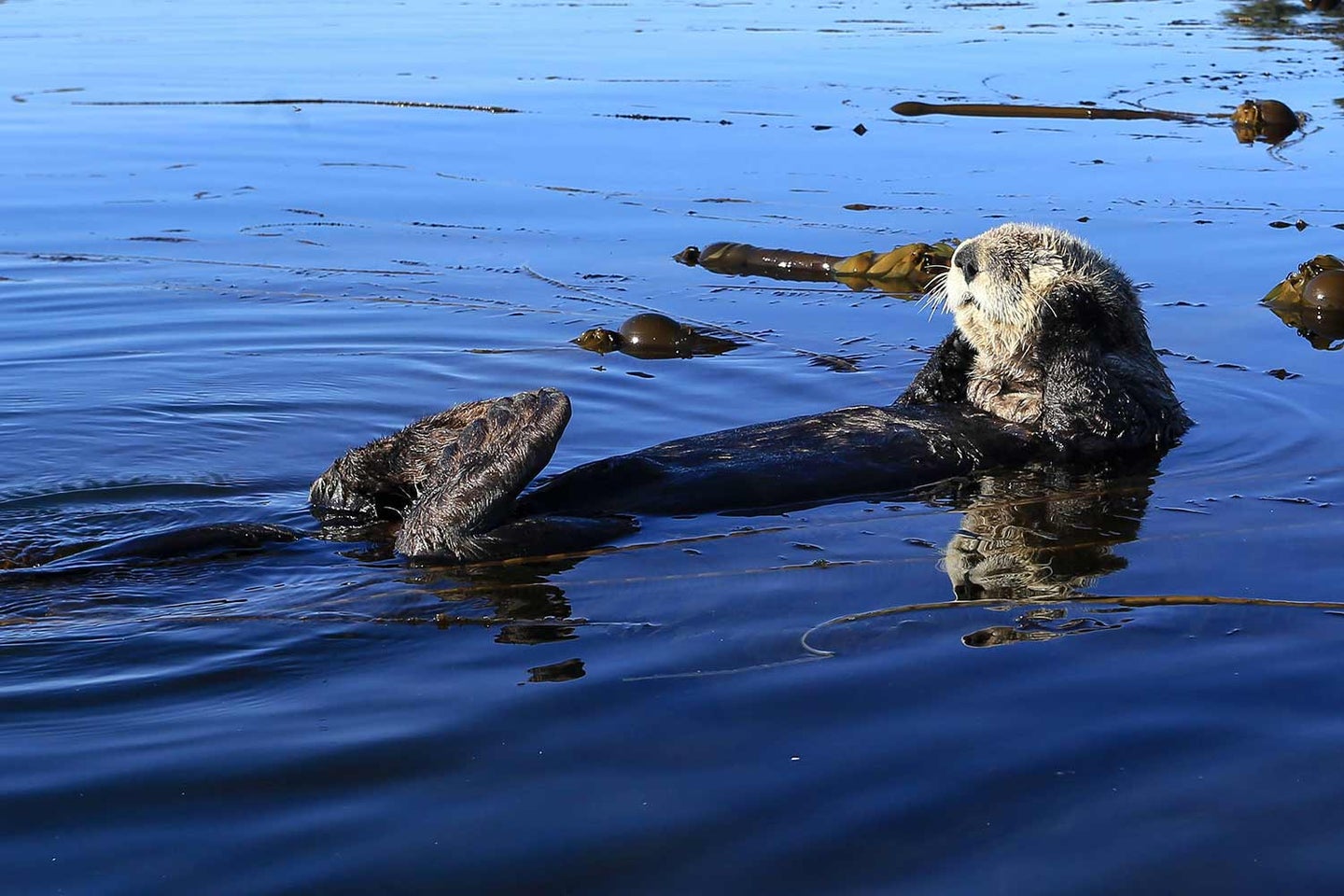 Phil Doherty doesn’t think sea otters are cute. Sure, he can see why tourists might get a kick out of watching the fuzzy critters reclining in waves with clams on their bellies, fixing to chow down. But to Doherty, co-director of the Southeast Alaska Regional Dive Fisheries Association and the commercial fisherman he represents, those cuddly otters are eating their bottom line.

Northern sea otters were hunted to near extinction during the Russian fur trade. When the U.S. purchased Alaska in 1861, remnant populations hung on in the Aleutians Islands but across the rest of the territory they were exterminated. In the 1960s—when wolf reintroduction was being suggested, and rejected, in the Lower 48—the state of Alaska relocated this nearshore apex predator to southeast Alaska, transplanting 412 sea otters from those last wild populations in the Aleutians to sites near Craig and Sitka.

For almost 40 years, the otters in southeast Alaska scrapped by. But in the early 2000s, their numbers exploded: From 2002 to 2011, the sea-otter population more than doubled from 11,000 to 25,500. The total number of sea otters in southeast Alaska today is unknown, but biologists with the Alaska Department of Fish and Game estimate that it’s around 50,000. (The U.S. Fish and Wildlife plans to do a count in 2021, pending funding.)

Otters are not small animals. Average adults weigh 60 pounds, but they can grow as large as 100 pounds—about the size of a black Lab. Since sea otters are the only marine mammal without a layer of blubber, they need to eat 25 percent of their body weight a day to keep warm and healthy. That’s 15 to 25 pounds per day, per otter, of Dungeness crabs, red sea urchins, geoduck clams, and sea cucumbers—all of which are important, and valuable, to commercial and subsistence fishermen.

“When wolves were reintroduced in the West, ranchers didn’t want them picking off the occasional beef cow, or reducing the number of game animals,” says Doherty, who is a former fisheries biologist for the Alaska Department of Fish and Game. “But deer and elk can run away from wolves, so a natural predator-prey equilibrium developed. Urchins can’t run from otters. Clams can’t run. The way otters feed, there is no balance. They wipe everything out.”

Northern sea otters—along with polar bears, Pacific walruses, manatees, and dugongs—are protected by the U.S. Fish and Wildlife Service under the Marine Mammal Protection Act (MMPA). As such, they’re not managed at a state-wide level like other apex predators, such as bears or wolves, whose numbers are managed with a regulated hunting season. Lori Polasek, a marine mammals program coordinator with the Alaska Department of Fish & Game, said this puts the state in a tough spot.

State officials are required to set sustainable shellfish harvest limits, but otters don’t need to follow the regs, and when they eat out shellfish beds, fisherman don’t just loose that spot, but harvest limits are reduced on the spots the otters haven’t yet found.

Part of the issue, Polasek says, is how quickly otters move into new waters—and eat them out. Sea otters are particularly gluttonous when it comes to sea urchins, their preferred prey. According to one study, otters can knock down urchin populations by 92 to 95 percent.

According to state figures, 54 percent of dive-fishing areas have been closed to sea urchin harvest due to otters. Such closures can create a negative ripple effect through the rest of the dive-fishing economy. Last year in southeast Alaska, the dive fishery—in which divers harvest geoduck clams, urchins, and sea cucumbers off the coastal seafloor—had an ex-vessel value (money made directly by fisherman) of $13 million. But that figure can triple or quadruple in economic impact as dollars spread through the community. “All these dive boats, they go to the fuel dock, they go to the grocery store,” Doherty says. “It’s an import wintertime economy.”

How Otters Help the Ecosystem

Not everyone wants to see otters knocked back. Otter spotting is a viable summertime tourist business. Plus, fewer sea urchins isn’t necessarily a bad thing, ecologically speaking, says Lynn Lee, a marine ecologist with Gwaii Haanas National Park Reserve, National Marine Conservation Area Reserve, and Haida Heritage Site in British Columbia. She worked on a park study in which a team of divers removed red sea urchins from the ecosystem, mimicking otter predation. (There are no otters in the park.)

“Sea urchins are like lawn mowers and graze everything in their path,” Lee says. “Lots of sea urchins create what’s called urchin barrens, where not much grows except pink encrusting coralline algae.”

Kelp in the coastal ecosystem, Lee adds, is comparable to an old-growth forest on land. It provides shelter and nutrients for a laundry list of aquatic species, from northern abalone to spawning herring, salmon, and rockfish. Kelp can also mitigate effects of climate change like ocean acidification, while protecting the shoreline from wave action and erosion. “Kelp is a huge net positive for the northern coastal ecosystem,” Lee says, and otters can help it along by driving down urchin numbers.

So, does this mean the fishermen in southeast Alaska need to come to terms with a reduced fishery and more otters?

“Not necessarily,” Lee says. “Part of the missing picture is people.”

How a Crafty Loophole Allows Otters to Be Hunted

No one expects the MMPA to grant the state the power to manage sea otters anytime soon, but an amendment to the act does allow Alaska natives to hunt and kill otters for subsistence purposes and for the creation and sale of native crafts, such as blankets, hats, and mitts.

Robert Miller, of the Kiksadi Clan in Sitka, does just that—and has turned it into a successful business, Sea Fur Sewing. “For me, fur sewing was a way to connect with my mother’s mother, who worked marine mammal hides,” he told me. “I thought to honor her memory by trying it.” Today, he exports luxury blankets and headbands to Texas and New York, and outfits Iditarod champions and stars on the reality show Life Below Zero with the warmest head gear and mittens known to man. “Sea-otter fur is the densest fur on the planet,” he says. “There isn’t a synthetic product in the world that can compete in extreme cold weather conditions.”

Under the MMPA, native Alaskans must be ¼ native or more to hunt or handle sea otter. The pelts cannot be sold to non-natives unless they have been significantly altered into a native craft, and they cannot be mass produced. For these reasons, not even Miller’s own children can help him sew, all of which he does himself, by hand, in his basement workshop. Only then can they can otter fur be sold within the United States. But most people, Miller says, still assume any marine mammal product is illegal.

For the native people, scientists like Lynn Lee, and others who met last month in Juneau for a U.S. Fish and Wildlife-sponsored symposium on otter management, they see native hunters and artisans as one possible way, under the MMPA, to deter otter expansion into coastal bays with important shellfish beds. But aside from tourists in Alaska, there isn’t much of a market for sea fur at the moment.

Miller would like to see his online business grow, but he says many platforms have shutdown sales of any and all animal products. “These tech companies think by banning fur products they’re somehow helping the environment,” he says. “What they’re really doing is hurting remote villages in Alaska.”

Mike Miller (no relation to Robert Miller) is a Sitka Tribe member, and chairman of the statewide Alaska Marine Mammals Hunters Group. His group and others—like Sealaska Corporation, the largest of Alaska’s 13 native corporations—have petitioned tech companies, such as Etsy and Pintrest, on behalf of native fur sewers. The state of Alaska has developed stamps of approval for marine mammal products, too, in attempts to help sellers. And since the U.S. Fish & Wildlife symposium last month, there’s even talk of sinking state and native corporation dollars into fur sewing classes for native people along the bays, and a wider education campaign to help the public understand that otter fur is legal to buy and own.

“Realistically, the only management tool available under MMPA, is native hunters and craftsmen,” Mike Miller says. “Based on what we’ve seen, will it bring back commercial fisheries? We don’t know, but it’s worth looking at.”

Sitka Bay, which has the most active otter hunters in the state, has seen less decline in shellfish, Mike Miller says, adding that otters are very clever. They figure out very quickly if they’re being hunted in an area, and move on.

Doherty, however, remains skeptical that ramped-up native hunting can keep his fishery alive. It’s working in Sitka, he says, because it’s a big town with real markets for native craftspeople. In the more remote waters where the commercial fleet works, there just aren’t the people, let alone the native hunters, to make a dent in the expanding otter population. Plus, he says, commercial fishermen just don’t get much mainstream sympathy when rallying against such a charismatic critter.

“To most people, otters are nice, fuzzy, warm, cuddly animals,” Doherty says. “Put them next to sea cumber, and I can guarantee you who’s going to win that beauty contest.”