A Beginner’s Guide to Hunting the Spring Snow Goose Season

Unplugged shotguns, extended magazines, and no bag limits mean 100-bird days are possible during the special spring season for snow geese and Ross’s geese. Here everything you need to know to get in on the action, from guns and loads to decoys and tactics 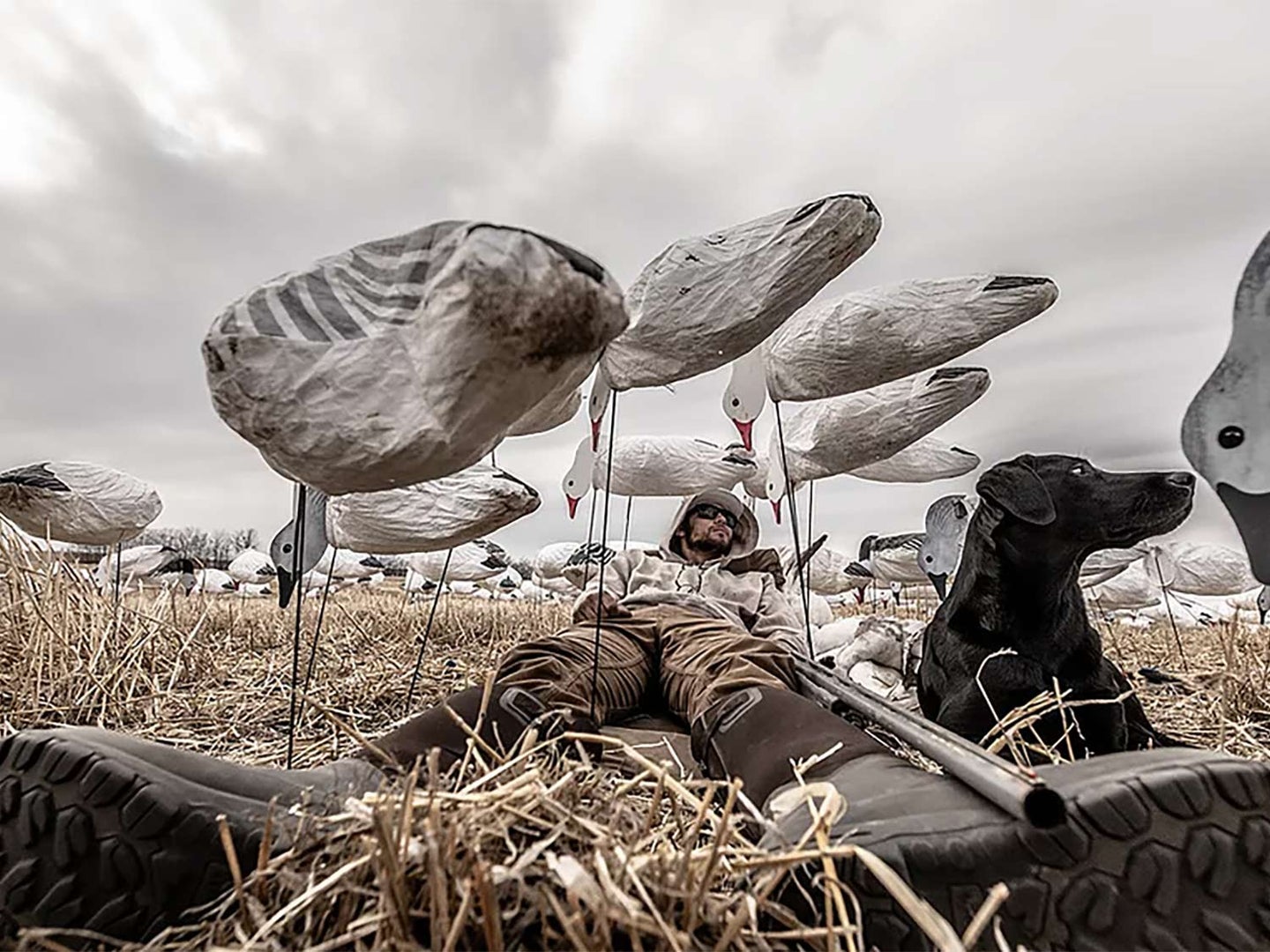 The white geese are coming, and not a minute too soon. Duck season is a distant memory. Canada geese are closed almost everywhere. What better cure for waterfowl withdrawal in the times of COVID cabin fever than to put yourself underneath a few thousand snow geese? Light goose season now runs into the spring in much of the Altantic, Mississippi, and Central flyways.

Wherever you do it, hunting light geese takes work. Like all goose hunting, it starts with lots of scouting. There are big decoy spreads to set, often in muddy fields. On the other hand, there are no bag or possession limits and you can use unplugged guns and electronic callers. So, if you put in the effort, the reward can be a high-volume hunt you never knew existed right near home.

Here’s what you need to know to get started.

What Are “White” or “Light” Geese?

“White” or “light” geese refers generally to two species of snow geese and to Ross’s geese. “Light” is the technically correct term, but people use both interchangeably. The Atlantic Flyway is home to greater snow geese. Slightly smaller lesser snow geese and duck-sized Ross’s geese make up the flocks of the Mississippi and Central Flyways. A blue color phase is quite common among lessers. Almost all Ross’s geese pure white and mature birds have distinct caruncled bills. Juvenile snows and Ross’s are gray.

All three species breed in the far north, from Hudson Bay to the Arctic, and make a long journey to their wintering grounds. Lessers and Ross’s geese winter from Arkansas to the Gulf Coast, while greaters stop along the mid-Atlantic coast.

Light geese evolved to feed on tubers and marsh plants, but the wholesale conversion of land to agricultural crops in the United States and Canada improved their diet to the point where they return to the breeding grounds fat, healthy, and ready to overpopulate the fragile tundra. The special conservation order season intended to reduce populations began in 1999 and remains in effect, which is why you can go goose hunting in the spring.

Where to Hunt for Light Geese

Restless migrators, snow geese stay just below the snowline as they head north in the spring. Days with southerly winds are migration days, while a north wind or bad weather may prompt short reverse migrations. Snows will stage by the tens of thousands when the weather holds them up, and it’s possible to scout and hunt feed fields just as you would in the fall. As you scout, bear in mind that snows think nothing of flying 20 to 25 miles out to feed. You can set up either on the X field, or on the flight lines between the feed and the roost.

Putting out a decoy spread in a grain field along a migration corridor and trafficking northbound or reverse migrators is very effective, and it works best when you can pick a high spot for maximum visibility. If you can find a pond by a grain field on the flightline, set a field-and-water spread. You’ll lure tired birds late in the day as they look for a place to feed a bit and rest overnight.

How to Set Out a Decoy Spread for Light Geese

Quintessential birds of a feather, all snow geese do is flock together. On a flight day, you’ll see skeins of geese stretching from horizon to horizon. It’s an awe-inspiring sight. On a practical note, it means it takes a lot of decoys to impress traveling snows. Spreads of over 1,000 decoys are common, but three hundred set in the right place at the right time work, too.

Start small. If you and a few friends all chip in on decoys you’ll have enough to start out. You can add a few every year, because snow goose sickness is a disease you’ll have long after COVID becomes a memory.

Set decoys in a teardrop shape with the point aimed downwind and a landing hole where the tear begins to narrow. Pack the decoys so tightly in the upwind portion that it’s hard to walk through them, but space the birds in the point farther apart. The whole spread might measure 100 to 150 yards from front to back. Geese will key on the point and follow it right up to the landing hole. Hide blinds among the tightly packed decoys upwind of the landing hole, but be ready to move them to the side if geese are seeing them, or even downwind if the birds are sliding off the spread short of the landing zone.

The Best Light Goose Decoys for Every Budget

When you hunt the greater snow geese of the Atlantic flyway, you’ll want primarily white decoys with some gray juveniles mixed in. The lesser snow geese of the Mississippi and Central flyways come in both white and the blue color phase. About 70 percent white geese, 30 percent blues make a good mix of adult decoys, which should make up about two thirds of the spread. The rest should be gray juveniles. If you have to err, err on the side of white decoys, which show up best.

Full bodies provide the ultimate in realism, which can matter, because adult snow geese are wary, and fooling a flock of 1,000 birds means you have 2,000 eyes to deceive. Full bodies require serious commitment. They aren’t cheap. You’ll need a trailer or maybe two to haul them all. Forget decoy bags. You use giant feed sacks instead. Hunting with full bodies is a major production.

Hunters in the east want the Pro-Grade Full Body Snow Feeder and Active Packs, which include four adults and two juveniles for $129.

Windsocks are affordable, they move in the wind, and you can fit 10 dozen in a bag, which means a spread fits in the back of a pickup. Dive Bomb Industries sells quality snow goose windsocks in short- and long-stake versions for around $65 per dozen.

Feeding snow geese move. They walk. They hop over one another to get to food. Include some motion in your spread. Sillosock flyers, $25 each, come on a 3-foot stake and flap their wings in a breeze. You’ll want some, and regular hand-held goose flags, too, for days when the wind dies.

You can use windsocks on long stakes in the water, but you need some floaters in a mixed field-and-water spread. RealImage goose floaters are reasonably priced and come in a package of four, including three adults and one juvenile.

Hiding matters with snow geese. The current trend is to wear whites and lay out on a back rest underneath long-stake windsocks. Hiding under socks works best on sunny days when it’s not miserable out and the shadows of the windsocks overhead make you invisible.

Layout blinds can work great in a field if there’s enough stubble to hide them. They work best cloudy days when they don’t throw shadows, and they are more comfortable when it’s cold and windy. Whichever you choose, experiment with hunting from different parts of the spread so you’re not directly in the approaching flock’s line of sight.

One of the first and still one of the best layout blinds, the Finisher sets up and breaks down quickly, and it’s a comfortable place to spend a day watching clouds of geese pass overhead.

Light and simple, the Dirt Ghost Blind works as a backrest for hunting in whites, or as a layout blind with its detachable boot bag that you can pull up to cover yourself with.

Camo up, cover your face, maybe throw on a white jacket. Get under some windsocks. Use your blind bag as a headrest and lie on a decoy bag if the field is muddy. Cost: $0.

Use one or two callers in a smaller spread and up to four in a big spread. Like all calling, electronic calling involves trial and error. Watch birds react and be ready to adjust the volume up or down if they’re not finishing.

Foxpro has made electronic callers for predators for years, and they bring that experience to this goose caller. It comes with 39 pre-loaded snow goose sounds and two speakers, and you can attach four more for extra volume.

No commercial call is cheap. Google “Make your own snow goose e-caller.” Buy or scrounge amps, speakers and wires, and a plastic tool box for the amp. Load a snow goose call app onto your phone. Plug the phone into the amp. Hit “play.”

Early in the season, when adult geese make up the bulk of migrating birds, you’ll often need to shoot geese at longer ranges over the top or as they slide. Later in the year, when the inexperienced juvenile birds migrate you have a better chance of good shooting at decoying birds up close.

Shoot a 12. It’s good to have a gun that can reach out. Modified is a good compromise choke for long and close shots. Or, pack an Improved Cylinder and Improved Modified in your blind bag and be ready to switch depending on whether adults or juvies show up.

Your gun should be reliable, and it will have to shoot when it’s dirty. If a snow goose field isn’t muddy, it’s dusty. Bring a can of G96 and give the gun a spritz if the action slows down. You’ll want to add a 2 or 3 magazine extension for snow goose season, too. Carlson’s offers extensions for many popular guns.

Deluxe Choice: Beretta A400 Xtreme Plus

One of most reliable gas semiautos, the A400 Exreme Plus has all the bolt closers and releases that people want as well as the very effective Kick-Off recoil-reducer in the stock. You can get it in white Kryptek Wraith camo, too, just for snow geese.

The new 3500 Snow Goose is a 3½-inch inertia gun that comes ready for the field in a coat of distressed white Cerakote, extended chokes, a magazine extension, and a spiffy paracord sling.

The conservation order not only allows no limits and unplugged guns, it allows extended magazines, too. You may shoot a lot, and you’ll be shooting at angles, like straight overhead, where you’ll really feel recoil. So, skip the 3½-inch shells and super-high velocity stuff. You don’t need it, anyway.

The 3-inch, 12 gauge blend load contains an ounce of BBs and a quarter ounce of smaller TSS pellets to fill up your pattern. It’s pricey, especially for high-volume shooting, but it really works.

The choice of many budget-minded hunters, “Blue Box” Federals were already good before they received a makeover. Now they have better powders, primers, and shot, and they still cost under $20 a box. What more do you want? Shoot the 3-inch BB, No. 1, or No. 2 load at 1450 fps.