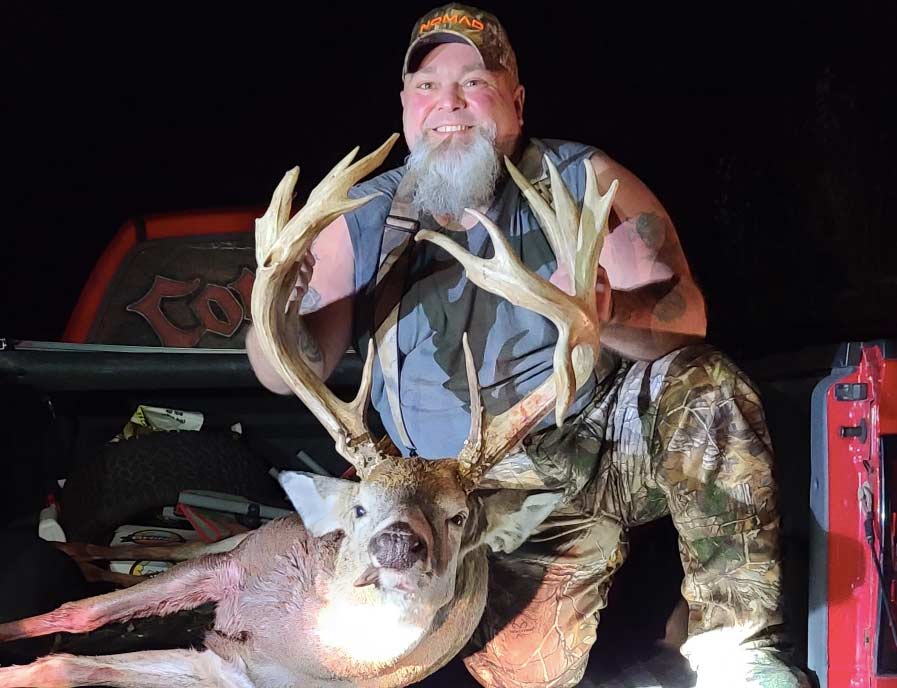 Pless made a 50-yard shot to collect this incredible buck. Phillip Pless
SHARE

Stay tuned to F&S.com for more big buck coverage, like this 225-inch Indiana giant, these late-season bruisers, and the biggest bucks of 2020.

It’s official. New York has a new state-record non-typical archery buck. Bowhunter Phillip Pless arrowed the 18-point drop-tine behemoth on November 8th, and the rack was officially scored and declared a new record late last month. And Pless wasn’t the only whitetail hunter to arrow state-record buck in New York last season. Another bowhunter killed a 197-inch typical buck…on Long Island. You can read the story of that deer on Outdoor Life.

The hunt for this giant whitetail started last summer, however, at the archery range. You know the joke about the tourist who asks the New Yorker how to get to Carnegie Hall, right? Practice, practice, practice. Dumb punchline, maybe, but it was a smart strategy for Pless, whose practice regimen of shooting dozens of arrows a day at distances up to 70 yards paid off with a buck that’s no joke: the giant non-typical officially netted 214-2/8, nearly 4 inches better than the previous state-record mark.

Pless took the buck on his wife’s family farm near Appleton, New York, just a few miles from Lake Ontario. He closed the deal with a 50-yard shot after watching the big deer chase does for more than a half hour, waiting nervously as the clock ticked toward sunset and the whitetail crisscrossed a cut cornfield before finally coming into range with less than five minutes of legal shooting time remaining.

“Normally I don’t shoot out past 40 yards,” Pless says, “but this year I made a point of practicing out to 70, because I’d been watching this buck and was anticipating a long shot.”

Pless first spotted the deer on his trail cameras four years ago. He got only a couple of photos in 2019, but in 2020 the deer showed up more frequently on the 50-acre farm. In summer he occasionally observed the buck feeding in the open, and while riding his ATV encountered the deer in a pair of woodlots that flank the cornfield where he eventually shot the buck.

“He was big in years past, but got a lot bigger this year, obviously,” Pless says. “I’m not someone who can look at a rack and tell you how many inches it is. I had no idea what he’d score. I just knew he was big.”

He built a target stand and used spray paint to mark off yardage on his practice range. He bought a new sight for his bow. Then he got busy. “I’d shoot five or six arrows from 20 yards, then go check the target. I kept at it until I was satisfied, then I’d move back to 30.” So it went, all the way out to 70 yards, until Pless felt confident he could make an ethical shot beyond his prior comfort zone of 40 yards.

On Nov. 8, Pless wasn’t planning to hunt. He’d hunted the same treestand in a treeline overlooking the recently harvested cornfield every day for two weeks. But this Sunday his wife, Elizabeth, had errands to run and Pless had to babysit daughter Grace, 3, and son Liam, 2. Plus, there was a Buffalo Bills game on TV. But when his wife returned at halftime, Buffalo had the game in hand. “I had a gut feeling that I was gonna see something,” he says, “so I decided to go out.”

He settled into the stand around 3:15. Shortly after, Elizabeth sent him a text: She’d brought the kids to the farm for a walk. Pless told her come on back, and he’d wave to them from afar.

He’d just put his phone down when he spotted the buck.

About 115 yards away, the big whitetail had just followed a doe to the grassy edge of the cornfield. Pless snapped a photo with his cellphone, sent it to his wife so she’d avoid the field, and got ready.

“The buck disappeared back into the woods, but the doe he was following stayed in the field,” he recalls. “I was watching and watching, and finally he came back out and started feeding. I tried my grunt call, but it didn’t faze him: He’d just raise his head and go back to eating. After three or four tries, I hung it up.”

Three more does entered at a different spot and started dragging the deer farther from the treestand. The first doe, meanwhile, was slowly walking toward Pless. Just then, one of the three does that the buck was scent-checking kicked him, and he gave up and began making his way back to the first doe. By now she was 70 yards away from Pless, moving on a line that would bring her within 50 yards, with the buck right behind her.

“He was slowly and surely coming to me. He’d stop and sniff around, put his head down to eat, then get back on her trail. But it felt like forever. Shooting hours were almost over, and I was worried I wouldn’t get a chance before then.”

With about four minutes left of legal light, the buck was finally broadside at 50. Pless never got the chance to stand up. “I had to take the shot sitting down,” he says—the one thing he hadn’t practiced. The buck ducked at the shot, and the arrow hit just above the right shoulder, most likely severing the jugular: Through binoculars, he watched the deer run off with tail tucked, stop at the edge of the field, and collapse.

“I was cursing like a sailor—and I was a sailor,” Pless says of the adrenaline surge that carried him through phone calls to his wife, his dad, and his recovery crew: brother Jason Pless, nephew Connor Pless, and buddies Kevin Austin and Scott Pipiles. They came to help the disabled Navy veteran, who served two tours in the Gulf aboard a guided missile frigate, drag out and field dress the 250-pound buck.

Pless’s taxidermist, Tim Young, told him to prepare for a lot of attention, but it wasn’t until Boone & Crockett measurer Don Haseley did a green score that Pless had any inkling that his buck might be more than a personal best. “I had no idea it might be a state record,” Pless says. “I didn’t even know what the state record was. It’s not something I ever dreamed would happen.”

But when the measuring was done and the score tallied, Pless’s 5 ½-year-old, 18-point non-typical buck grossed 221 3/8 inches and netted 214 2/8, topping a 210-4/8-inch 23-pointer killed by Mike Giarraputo of Suffolk County in 2011, and taking its spot as the biggest non-typical buck ever taken with a bow in New York State.