Calling, decoying, and tactical advice from these seven pros will help you to get your gobbler right out of the gate 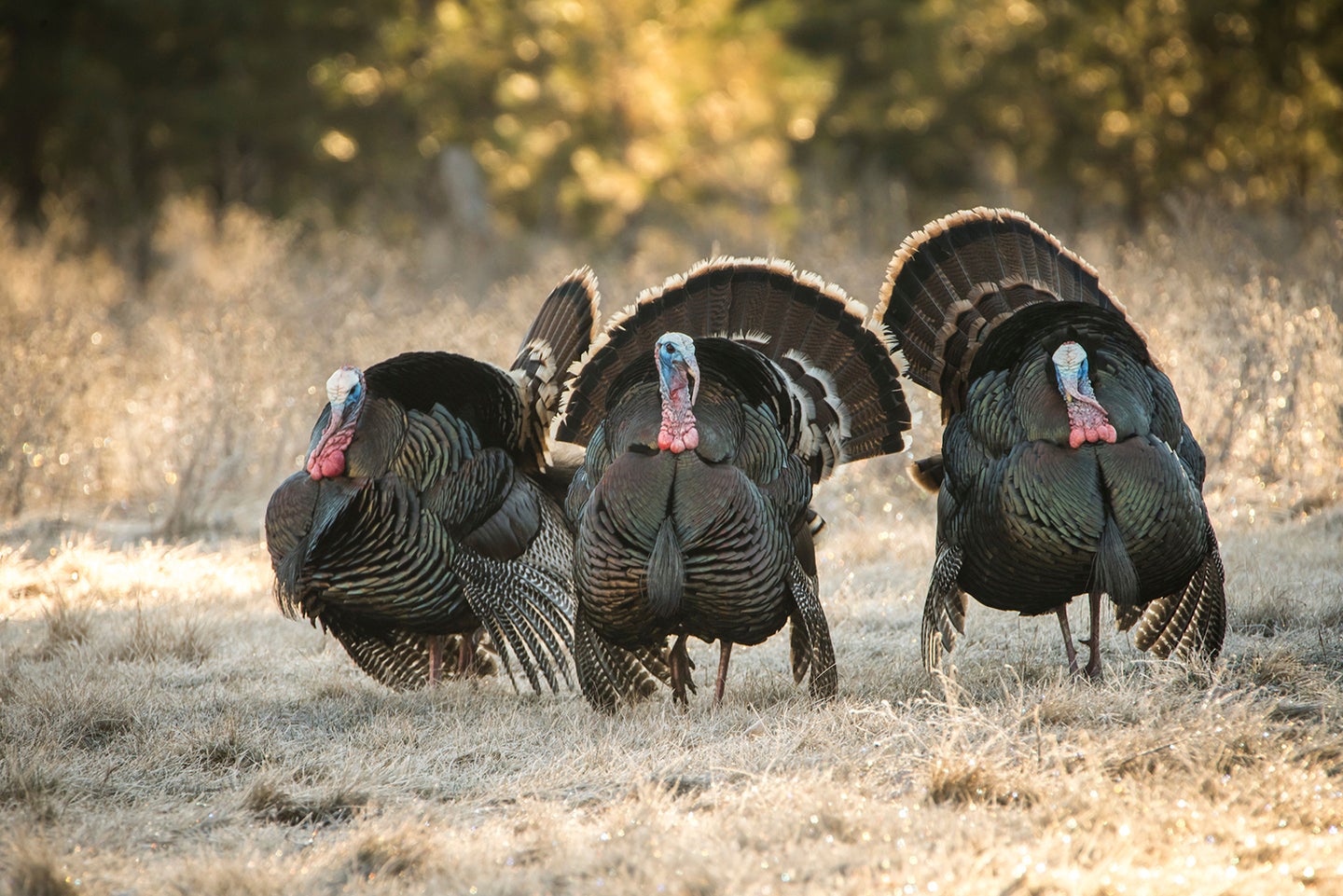 Harvest statistics prove that the first week or two of turkey season is when most hunters tag out. So early-season toms are pushovers, right? Of course, not. That high early-season harvest is more a function of hunter effort than of naïve birds. True, most gobblers haven’t heard a call or seen a hunter in months, but they’re still turkeys, with a very low tolerance for missteps. You need to bring your A-game. To that end, we interviewed seven of the country’s top turkey experts to get their best tips for taking an early bird.

“I’m rarely in a hurry to move on a gobbler in the early season,” says Woodhaven Custom Calls pro and champion caller Steve Stoltz. “With so little foliage on trees and brush, I assume every turkey I hear can see me, because he probably can. If I strike a gobbler, I usually sit down right away and try to work him from there. A turkey can see five times farther in the timber than you can, so I only move when I absolutely know there’s something solid between me and that gobbler.”

Conventional wisdom says that when you’re working a roosted gobbler now, you should stick to soft tree yelps and clucks, sparely delivered. But turkey guide Kevin Small of Midwest Outfitting in northern Missouri doesn’t buy it. “I don’t want to be some passive little hen on a limb,” he says. “I want to convince that tom that the first place he needs to go to when his feet hit the ground is to me. I’ll start with the soft stuff, but if he isn’t gobbling in response to my first calls, I’ll switch call types until he does. And then I start cutting him off when he gobbles. Pretty soon I’ll have him gobbling every time I touch my call. If I can create that scenario, I’ll kill that turkey by sunup 70 percent of the time.”

3. Find turkeys by scouting for acorns.

If you’re hunting a new area, one of the surest way to find birds—or a good place to listen for gobbles at dawn or dusk—is to locate last year’s acorns. “We had a killer crop of acorns and beech nuts in the mountains last fall,” says Phillip VanderPool, host of The Virtue TV. “And those mast crops will still play a major role in where birds are located at the opener. Even the bad acorns that the deer and bears wouldn’t touch in winter are fair game for turkeys, who love a wormy acorn or beech nut as much as a perfect one.”

4. Look for the lone gobbler.

If you want to kill the boss gobbler on a property now, keep an eye out for that longbeard that’s not mixing it up with every two-year old or jake, says NWTF grand-slam leader and Tag It Worldwide hunting consultant Jeff Budz. “That tom who hangs off by himself, especially early in the spring, either doesn’t like to fight, or doesn’t have to,” says Budz, who has registered an incredible 103 turkey slams. “Almost invariably he’s an old bird who just has the flock thing out of his system and is around to breed hens and stay alive. Fortunately, a bird like this is often predictable; he has favorite spots and routines that have been successful for him. Figure out those patterns and don’t get super aggressive and you can kill the biggest turkey of your life.”

5. Switch it up on tough toms.

When you run into an early-season gobbler that has trouble committing, it rarely pays to get into the sort of standoff where you call, and the tom gobbles but doesn’t budge, says David Halloran, owner of David Halloran Turkey Calls. “That usually ends with the gobbler losing interest. So, when I get a bird like that, I like to either switch calls, or shut up, or move to a different position. Those changes keep his attention, and more often than you’d think, that bird will suddenly want to come to you. And once he breaks, he’ll cross almost any obstacle to make that happen.”

6. Have a plan before you call.

Philip VanderPool does a lot of mountain hunting, where bird numbers are low. That means he has to cover big swaths of ground while trying to strike a bird. “One thing I learned in a hurry is to never call without a good tree or brush pile to set up against close by—as in right next to you. Some days you can walk for a mile without striking a bird, and then suddenly one sounds off just over the rise. He can be on you in seconds, and if you don’t have something to immediately set up next to, you’ll bump that bird, especially early in the season when the woods are bare.”

We all have pet calls that have become our favorites with time and experience. Mine are an aluminum pot and a high-pitched box call. But let’s face it, there are days in the turkey woods when even those calls can’t make a bird respond. So, make a point of adding at least one call type to your vest, and your repertoire, this spring. You can still run your favorites, of course, but on that morning where everything is dead, or if a gobbler yawns at your go-to offering, pull out that new call. Over the years I’ve lost track of the turkeys my buddies and I have called up by running a call from the reserve lineup.

8. Try gobbling to a gobbler.

“In many states, early-season gobblers are either flocked up or still in small groups, working out dominance,” says Tad Brown, product development specialist with Hunter’s Specialties. “When that’s the case, I like use a gobble tube or shaker call. Lots of early-spring toms will respond to a hen yelp, but what they come to is another gobbler. Until flocks are fully dispersed and those dominance issues largely settled, sounding like another tom can be the best way to pull in a difficult turkey.” Just be sure to use extra caution when sounding like a tom during the open season.

“My favorite early-season decoy setup is either a lone jake or a jake with a hen in the breeding position,” says Brown. “Strutting gobbler dekes can work great with the right bird, but if you’re working a tom that has had his butt kicked recently or is low on the dominance ladder, it can scare him off.” A lone jake, on the other hand, or one that looks like he’s paired up with a willing hen, is something that very few longbeards can resist, according to Brown. “That gobbler won’t always come running in to fight, but even then, he’ll usually keep working in and eventually confront your jake decoy. It’s like a little guy taunting a big one on a playground; there’s only so much teasing he can take!”

Not every turkey you bump is scared witless. Plenty of gobblers will shy away from a setup just because they see something that’s not quite right, says Jeff Budz. “I call these ‘soft bumps,’ and you can usually get this turkey interested in you again. Let him walk off, give him a few minutes and, if the terrain allows it, move and work that gobbler from a different angle and location. Sometimes I’ll break out a new call, one I haven’t used on that gobbler, but it’s not always necessary. If he was hot for a certain call and he hears it a little later from a different location, he might climb all over it. It’s like he’s thinking ‘Oh, there she is!’”

This time of year, you’re often dealing with groups of gobblers running together. When you’ve got a wad of these guys coming in to you, there’s only one turkey to focus on, according to Tad Brown. “Pay attention to the leader, which is the bird coming first,” he says. Whatever he does, the others are going to mimic, which includes both coming to the call and running off. So, pay close attention to what that turkey likes when it comes to calling, and make sure he doesn’t spot any movement. “You can have a six-gobbler flock running to you and think, What could possibly go wrong? Well, if you booger that lead turkey, you can go from a six-pack to nothing in no time at all.”

12. Tone down your calling.

With little foliage to absorb it, sound carries farther in the early season. Once Steve Stoltz know a gobbler is moving his way, he tones the volume of his calls way down, using only soft feeding yelps, clucks, and purrs. “I want that bird to have to hunt me. There’s a lot said about gobblers hanging up, and people often assume it’s because of some obstruction the bird doesn’t want to cross, like a ditch or a fence.” More often, says Stoltz, it’s the hunter’s calling. “If you call loud enough, that gobbler will know exactly where he should be seeing the hen and where she should see him, and that’s where he stops. Keep him guessing, and he’ll usually walk right into gun range.”

One of the most effective and easy-to-learn “calls” to tuck in your vest is the wing of a gobbler you killed the year before or a hen you killed in the fall. Nothing is more effective and realistic for imitating a bird pitching off a roost when combined with a fly-down cackle. And if you want to create a kick-butt jake/gobbler fight, smack the wing against your pants leg, and the ground, while making fighting purrs and gobbles on a tube call.

Locator calls are great for roosting a gobbler, but when Kevin Small really wants to seal the deal on a particular gobbler the following day, he goes out an hour or two before dark dressed in full camo and a vest full of calls. “When I strike a bird, I’ll yelp to him just like I’m trying to kill him, but with our hunting hours closing at 1:00, of course, I can’t.” So why the full camo? “I don’t want to bump that bird while sneaking close or when leaving, and I want him to fly up to the roost still looking for me,” he says. “I’m convinced turkeys recognize specific calls, and I want that gobbler to wake up to the same hen that he was gobbling to when he went to bed. If he goes to sleep with your yelps in his brain, and that’s the first thing he hears when he wakes up, that turkey is going to wear your tag.”

Tad Brown likes to run and gun as much as the next guy, but he believes it can be the kiss of death if you’re limited to hunting a small property. “The more you move, the more turkeys you bump, and the more birds you bump at the beginning of the season, the less they’ll use that property for the rest of it,” he explains. “When all I’ve got is 40, 80, or even 100 acres to roam, I go into deer hunting mode. I use trail cameras and plenty of glassing and observation to pick out the places I consistently see gobblers. Then I stake a blind there and just wait it out. I call a bunch, but basically, I refuse to move, and within two or three days I’ll tag my bird. It’s not as exciting as running and gunning, but hunting a tract that turkeys want to avoid is way more boring, trust me!”