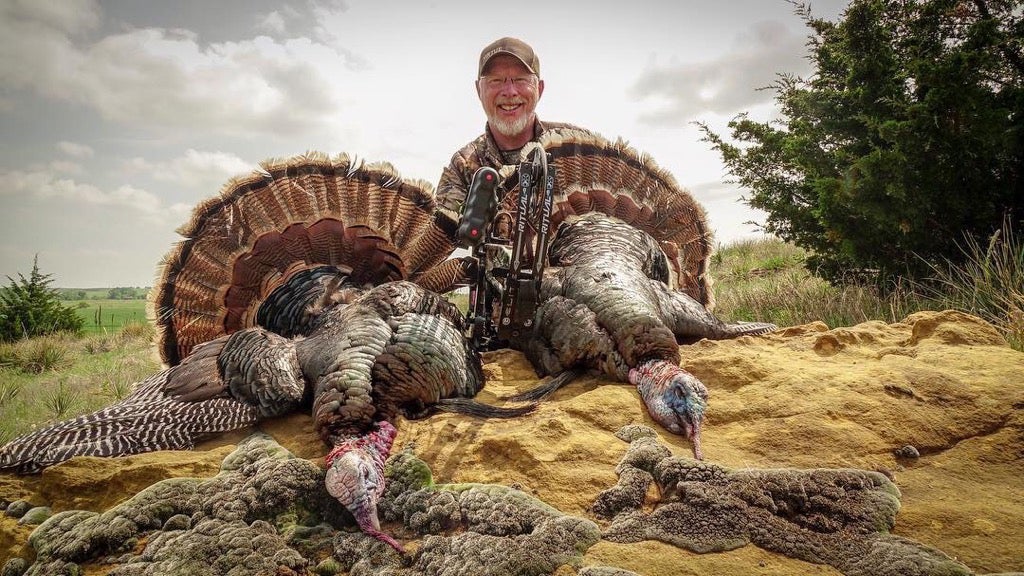 Arkansas pro Phillip Vanderpool started bowhunting for turkeys in the early 1980s, decades before it became trendy and years before the hub-style pop-up blind was invented. Since then, the host of The Virtue TV show has wrapped a bow tag above the spur of 96 longbeards. More than half of those, he killed without a blind. So, whether you’re happy to wait out a tom from within the confines of four fabric walls, or you’d rather run and “gun” with a bow in your hand, Vanderpool has some advice for you. Here are his top 10 tips for bagging a spring gobbler with a bow.

1. Use the right decoys for bowhunting turkeys.

Although Vanderpool has bow-killed gobblers without decoys, he typically uses them for two critical reasons: First, they help draw toms into easy bow range, and, second, they distract the bird’s attention while you draw your bow. “The more realistic your decoys are, the better,” he says. “I love Dave Smith Decoys because they’re not only lifelike, but also extremely tough.” Vanderpool’s favorite setup is a hen, low to the ground in a breeding position, and a posturing jake, fitted with a real fan, nearby. “I think the jake is critical, especially in the timber, because of its colorful head. I’ve had gobblers walk past in the woods and never spot a lone hen decoy, but they never miss a jake.” When using a blind, he stakes his dekes only 5 or 6 yards away, as he can get away with a little more movement. Without a blind, he puts them 10 to 12 yards off.

2. Work on your calling.

Bowhunters need to get birds close, and realistic calling helps. “You can never be too good at it, in my opinion,” Vanderpool says. “I love to use pot calls and boxes to strike birds, but when I know a tom is coming in, I switch to mouth calls so my hands are totally free. One thing I learned early was to cluck and purr with my voice, which is a really good closing call when the gobbler is near the decoys. It’s quieter than a mouth call, which, if you’re excited, can come out squawky or loud if you’re not careful.”

Vanderpool loves to run and “gun” with bow, but the tactic presents specific challenges—like finding suitable cover when he strikes a bird. “The first thing I look for is shade,” he says. “Turkeys will spot you much more easily if you are sun-lit, so I put my decoys in the sun and keep myself in the shade. With the decoys highly visible, the gobbler’s attention will go there, while the shade helps to hide my silhouette.”

4. Use natural cover as a hide.

As long as you have shade working in your favor, good natural cover is all you need to stay hidden. “The most important element is a solid backdrop that hides your silhouette,” Vanderpool stresses. “A big tree trunk is perfect, of course, but a downed tree top or a brush pile can work well too, or even dense brush or tall grass.” Cover behind you is the key, he says. “Cover in front isn’t quite as critical, but if I can set up with a small bush or tree, like a shrub cedar, between me and the decoys, that’s perfect. I just wait for the bird to go behind that before I draw my bow.”

5. Let turkeys come in from the side.

While gobblers can be maddeningly unpredictable in their final approach, Vanderpool does his best to guess what direction a tom will come from as it commits to the setup. “Ideally, I want the bird coming in from the side, as opposed to head-on,” he says. “That bird is more likely to see me draw if he’s coming straight in to me. With a side approach, I’m in the peripheral vision of just one eye.”

6. Pick the right time to draw on a turkey.

The toughest part of bowhunting turkeys without a pop-up blind is getting drawn on a tom, according to Vanderpool. “There are really only two options. One is to draw when the bird is still out there a ways and then let him walk into the setup.” That’s a good option if the tom is really hot and coming hard. If he hangs up, however, you might have to let down and re-draw. “My favorite approach is to let the bird walk into the decoy setup before drawing. The key is to let him get involved with the dekes; he’s going to strut, or try to breed the hen, or challenge the jake decoy, or a gobbler decoy if you have one. When he’s interacting with the decoys, he’s totally distracted…and that’s when you draw. The key is to be patient.”

7. Lower the draw weight of your bow.

Another key to getting drawn on a gobbler is to simply make pulling the bow back easier. A hardcore big-game hunter, Vanderpool uses the same bow to hunt turkey as he does for deer and elk, with one major tweak: “I drop my draw weight at least 10 pounds, down into that 50-pound range, and you can go even lower if you want.” The reason is because he wants to be able to draw the bow straight back, with no wasted motion, as the bird approaches. “And I want to be able to hold it at full draw for what could be a long time.” Practice drawing your bow from a seated position before the season starts; if you can’t pull it straight back and hold it comfortably, crank down the draw weight. “Another reason I like a lower draw weight is because I want my arrow to stay in the turkey—so that the broadhead continues to work on the bird as it walks or runs off—and a lighter draw weight reduces the chance of a pass-through.”

8. Aim in the right spot to kill a turkey.

Archery hunters have four vital areas they can aim at to kill, or at least immobilize, a turkey: the head, the backbone, the internal organs, and the thighs. Since the head is small and almost constantly moving, Vanderpool largely ignores it, which leaves the other three aiming points. “Probably my favorite is the Texas heart shot on a strutting bird,” he says. “I let him face away and aim just above the bottom of the fan, which runs the arrow right up through the vitals and usually hits the spine. On a bird facing me, I aim right below the wattles, which usually severs the neck and works back into the vitals. On a sideways bird, I aim either behind the wing butt, or on the thighs. If you take out the thighs, the bird can’t get his legs under him to fly.”

9. Choose the right broadhead for turkeys.

Those punch-through-’em fixed-blade heads that are popular on larger game can work on turkeys, of course, but they require pinpoint accuracy, which can be difficult to achieve given the tiny vital areas on a gobbler. “That’s why I prefer an expandable, like the Slick Trick RaptorTrik,” Vanderpool says. “They have a 2-inch cutting diameter, so I have a better chance at hitting the vitals, plus they fly well and tend to stay in the bird, rather than pass through.”

Reaping is all the rage now, and Vanderpool has used the technique with archery gear many times. “It’s about the only technique that works on those field gobblers who plant their feet and won’t come to a call,” he says. “I look for a bird that’s strutting to show his dominance, then I call to get his attention and just keep that fan pointed at him. Last spring, I had a gobbler and three jakes run to that, and I basically killed that tom in self-defense.”

Four Reasons to Use a Blind for Bowhunting Turkeys

As much as Vanderpool enjoys the challenge and freedom of bowhunting turkeys without a pop-up blind, he still uses them more often than not. Here’s are four reasons why.