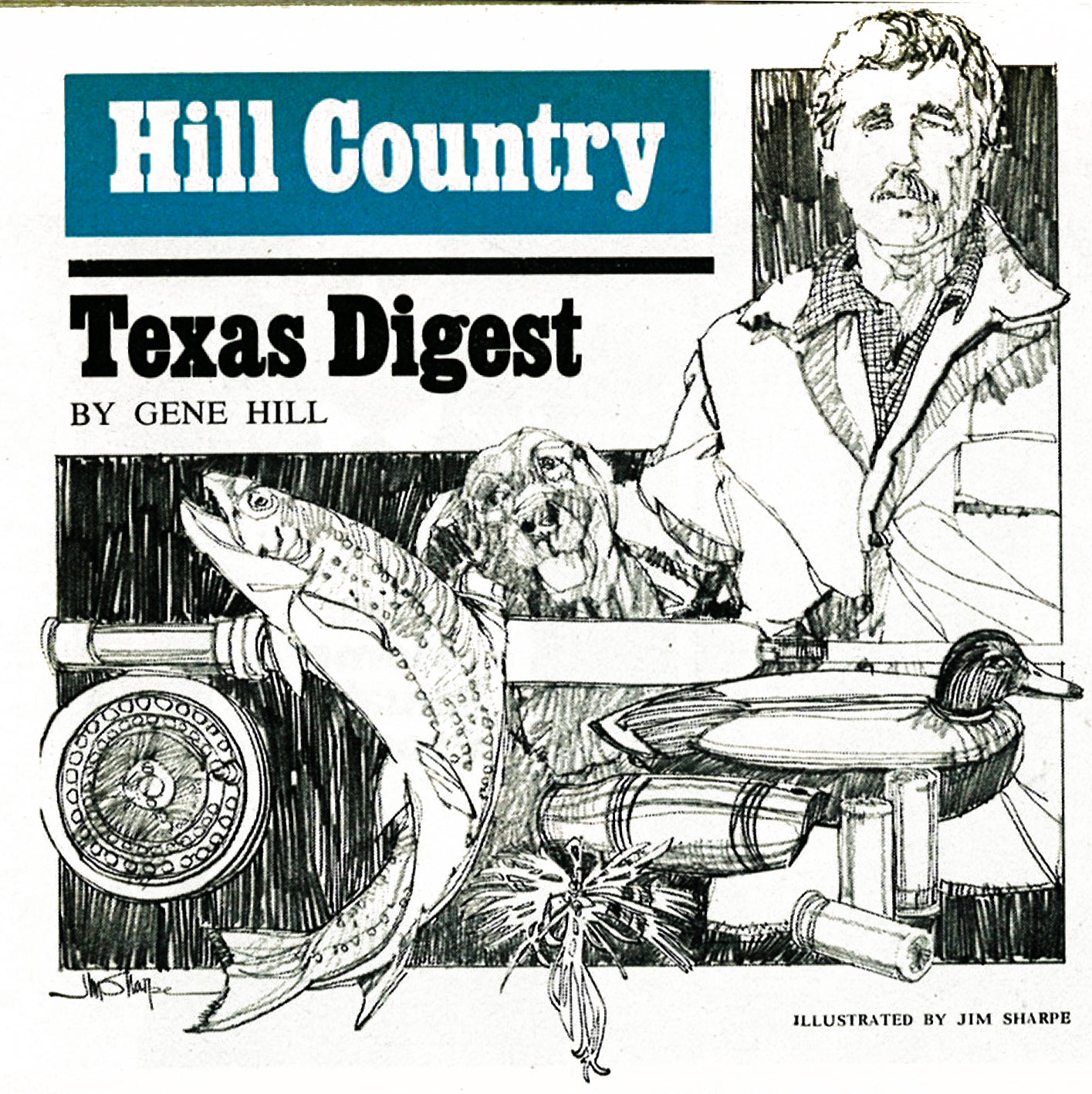 Hill Country: Texas Digest
"Hill Country," one of Field & Stream's most popular columns, debuted in April 1977. The best way to introduce you to Gene Hill and his special world is to quote from the opening of his first column, in which he said, "Hill Country is neither here nor there. It's the place just over the next rise, that soft pool around the next bend, or that cover you planned to hunt but somehow never did." For 20 years, until his death in 1997, Gene invited readers to pull up a chair by the fire and talk about shotguns, fly rods, dogs, people, and places (not necessarily in that order). This is a sample, on Gene's love of Texas. Field & Stream
SHARE

I spent quite a lot of time in Texas this year, and I thought you might like a report on what’s going on. First, there’s good news—Texans are beginning to drink wine with their meals. That’s right, straight wine; not mixed with a cola or anything!

This is a great aid to the average Easterner’s digestion, which is as delicate as a hummingbird’s when compared to a Texan’s. Generations of Texas fathers have passed to generations of Texas sons an intestinal system like the maw of a snapping turtle. This incredible heredity gives them the ability to stop at a roadside cafe with a sign that proclaims EATS, and run from the pickup to a snack that covers chicken, fried steak, Mexican hot sauces, raw onions, hot ketchup, and jalapeño peppers, all topped off with a piece of plastic pie, ice cream and a handful of corn chips.

I’m not saying that Texas food isn’t tasty, or possibly even nourishing; it’s just that I can’t hit the average truck stop there without the same feeling I had when I boxed—I know I’m going to get hurt, it’s only a question of how bad.

But I’m learning. For dessert I pass up the fluorescent orange pie and have a dollar’s worth of antacids instead.

A Texas public eatery is basically judged by the jars of chili peppers, banana peppers, and a variety of commercial and homemade sauces that are hot enough to weld steel. Food of the common variety, beef or chicken, is merely used as a carrier for the hot stuff. If a man entering one of these establishments sees six or more acid-proof laboratory jars on each table, plus a huge supply of cold beer, then starts to salivate like Pavlov’s dog–he’s a sure-enough Texan. If tears come to his eyes, it’s me.

Naturally the only thing a Texan eats when he hits a fancy place with his wife of an evening is steak. His wife eats the same thing, only hers is less than 2 pounds. And it can only be ordered rare. I’ve tried medium and well done, but the well-done order almost got the chef out of the kitchen in a rage. They serve it to me rare anyway; the specifying is merely an imitation of an Eastern formality. A rare Texas steak is about a foot in diameter, 3 inches thick, and is minus the hide. There is absolutely no way a cook can ruin it, because he doesn’t do anything more to it than sling it under a broiler long enough to get it over room temperature. I’ve seen animals hurt worse get well.

Texans also eat Mexican food, which I am told is delicious. It’s a moving sight to see a 240-pound, 6-foot-4 man with banana-sized fingers cradling a taco like a jeweler holding a ruby. He tastes it and then invariably adds some juice from one of the little laboratory bottles on the table. He tastes again and adds more juice. Only when little blisters appear on his lips and moisture seeps through his hatband is he satisfied. A voice barely above a whisper creeps through his tortured through—”Is that good! Best Mexican restaurant for a hundred miles!” Now what the restaurant has offered him beyond a jar of paralyzing pepper concoction that I’m afraid to smoke near is beyond me. You could dunk a breadstick in it and get the same end result. Why the traditional toothpick doesn’t go up in flames is a mystery.

Texans are as proud of their food as they are of everything else. There’s no doubt in my mind that there have been more fights over what makes a proper chili or barbecue than there have been over the War between the States. There’s also no doubt that I have not partaken of either proper chili or barbecue; otherwise, I wouldn’t be writing this piece–I’d be in some gastrointestinal ward, wired up like a moon shot.

I must say that there is no one on earth who is fonder of Texas and Texans than I am. I’d rather have a gall bladder attack in Fort Worth than a perfect pressed duck in Paris. And it’s odds-on, anyway.

I believe that Texas food rises to its heights in a hunting camp. It starts off with a cold cola to deaden what’s left of the stomach lining. Then comes venison sausage made with 50 percent meat and 50 percent of ingredients that would not get in the front door of the FDA. I do know that you mix up the components while wearing asbestos barbecue gloves. This is followed by the Mexican touch: huevos rancheros. These are several eggs covered by fire-colored sauce whose constituents are, or should be, listed in the San Antonio Poison Control Center. This is all washed down by either more cola or what is called coffee. The coffee isn’t really thick enough to patch a driveway; it’s more the consistency of drilling slurry. If you’re strong, you can stir it enough to dissolve some sugar. Don’t bother to add milk or cream; it won’t mix. I once drank half a cup and it left a stain on my teeth for a week. It took a whole plug of Cannonball to take the taste out of my mouth.

Lunch is chili. The average Texan must eat chili at least twice a week, or he suffers an attack of digestion. I gather that real chili doesn’t have beans in it, and I think I know why: a bean takes up the space they would rather have occupied by tiny flakes of an assortment of lethal peppers. You have to be careful with chili, because you if you spill any, it eats a hole in your blue jeans. If you drink about 8 ounces of beer to 2 ounces of chili, you ought to be about right. It’s a must to say that you like it–if you can’t talk, at least nod your head and smile.

Supper is always steak. If you’re lucky and it’s cooked over a campfire, you can keep tossing it back until it gets cooked. Try to be subtle. Texans think that well-done steak is part of the International Communist Conspiracy.

I’ve been with some of my Texas friends in one of the world’s most famous restaurants and watched them cold-eye a meal that included an exquisite truffled Strasbourg pate, Dover sole poached in a delicate white wine, and a veal piccata that would bring tears to the eyes of Escoffier like a 4-year-old would disdain a double order of spinach. They eat it–but to them it ain’t food.

But as I said, I consider myself an adopted Texan. It’s one of the few places in the world that I hate to leave and can’t wait to get back to. If I ever meet you in Texas, let’s just shake hands and say “Howdy.” Please don’t take me to lunch at a place with a sign that says EATS.