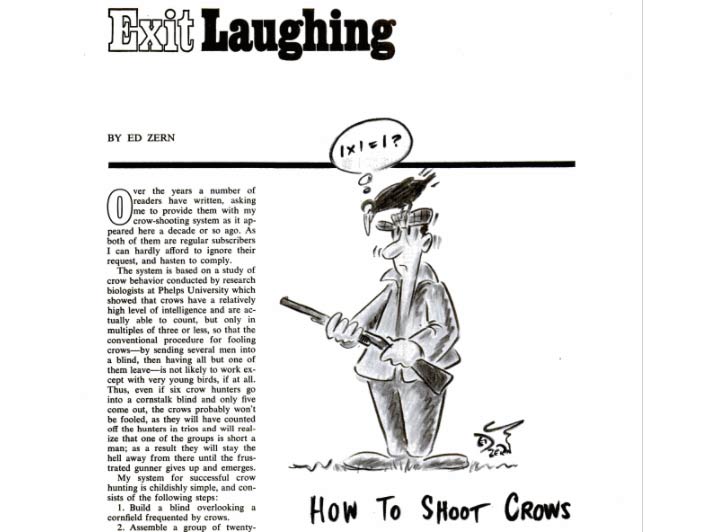 Ed Zern’s back-page column, “Exit, Laughing,” ran for more than 35 years, and “How to Shoot Crows” was him at his best—and most absurd. Field & Stream

F&S Classics: How to Shoot Crows

This column first appeared in the August 1973 issue.

OVER THE YEARS a number of readers have written, asking me to provide them with my crow-shooting system as it appeared here a decade or so ago. As both of them are regular subscribers I can hardly afford to ignore their request, and hasten to comply.

The system is based on a study of crow behavior conducted by research biologists at Phelps University which showed that crows have a relatively high level of intelligence and are actually able to count, but only in multiples of three or less, so that the conventional procedure for fooling crows-by sending several men into a blind, then having all but one of them leave-is not likely to work except with very young birds, if at all. Thus, even if six crow hunters go into a cornstalk blind and only five come out, the crows probably won’t be fooled, as they will have counted off the hunters in trios and will realize that one of the groups is short a man; as a result they will stay the hell away from there until the frustrated gunner gives up and emerges.

My system for successful crow hunting is childishly simple, and consists of the following steps:

1. Build a blind overlooking a cornfield frequented by crows.

2. Assemble a group of twenty-five hunters, all dressed more or less alike and of nearly equal height, build, and facial characteristics. All the hunters should be clean-shaven, but twelve of them should be wearing false mustaches. The group should assemble in a barn or some sort of building not less than 350 yards from the field. (It would be prudent to have a few spare hunters on hand, to substitute in cases of pulled muscles, heart attacks or other contingencies.)

3. All of the hunters should be equipped with 12-gauge shotguns, but it is advisable that these be fairly light in weight, as it is important that all hunters going to and from the blind must travel at a dead run, so that the crows will not have sufficient time for their calculations.

4. As soon as a flock of crows comes into the area, eleven of the hunters are dispatched from the old barn to the blind, running at top speed. The instant they arrive, seven of them turn around and rush back to the barn.

6. Before the ten arrive, eight more hunters are sent from the barn to the blind. When they meet the ten returning from the blind all of them switch hats and false mustaches while milling around in a tight huddle, then break it up and resume running to their respective destinations.

7. As soon as the eight hunters arrive at the blind, five of them turn around and rush back toward the barn; on the way they meet nine hunters running from the barn toward the blind, whereupon the hunters divide themselves into two groups of seven, one of which runs back to the barn while the other rushes to the blind, changes hats and mustaches, leaves two of its members there and dashes back to the barn.

8. Of the twelve hunters now in the blind, nine now rush across the fields to the barn while twelve of the thirteen hunters in the barn charge en masse from the barn to the blind; on arrival they immediately turn and sashay back to the barn taking two of the three hunters still in the blind with them, leaving a single hunter.

9. It is, of course, essential that all this be done at the highest possible speed, so that the crows will fall hopelessly behind in their arithmetic and in the consequent corvine confusion fail to realize that a hunter is concealed in the blind.

10. Eventually the crows will learn to count faster, so that the system must be modified occasionally to keep ahead of them. In addition to having the hunters run faster, it may be necessary to introduce false beards and quick-change toupees as well as false mustaches, and to build a second blind on another side of the field so that the traffic will be triangular instead of simply linear, requiring the crows to start working on trigonometric permutations and geometric progressions in order to cope. In severe cases the hunters may be equipped with numbered jerseys from 1 to 25 but with the number 17 omitted and two number 21s. (This can also be done with roman numerals, when birds are very wary.)

Well, you asked for it, readers, and you got it. Watch this space next month for an equally simple, foolproof system for outwitting that wily old woodchuck in the back pasture, requiring no special equipment other than a stuffed Guernsey cow and a milkmaid’s costume. Remember you saw it here first!