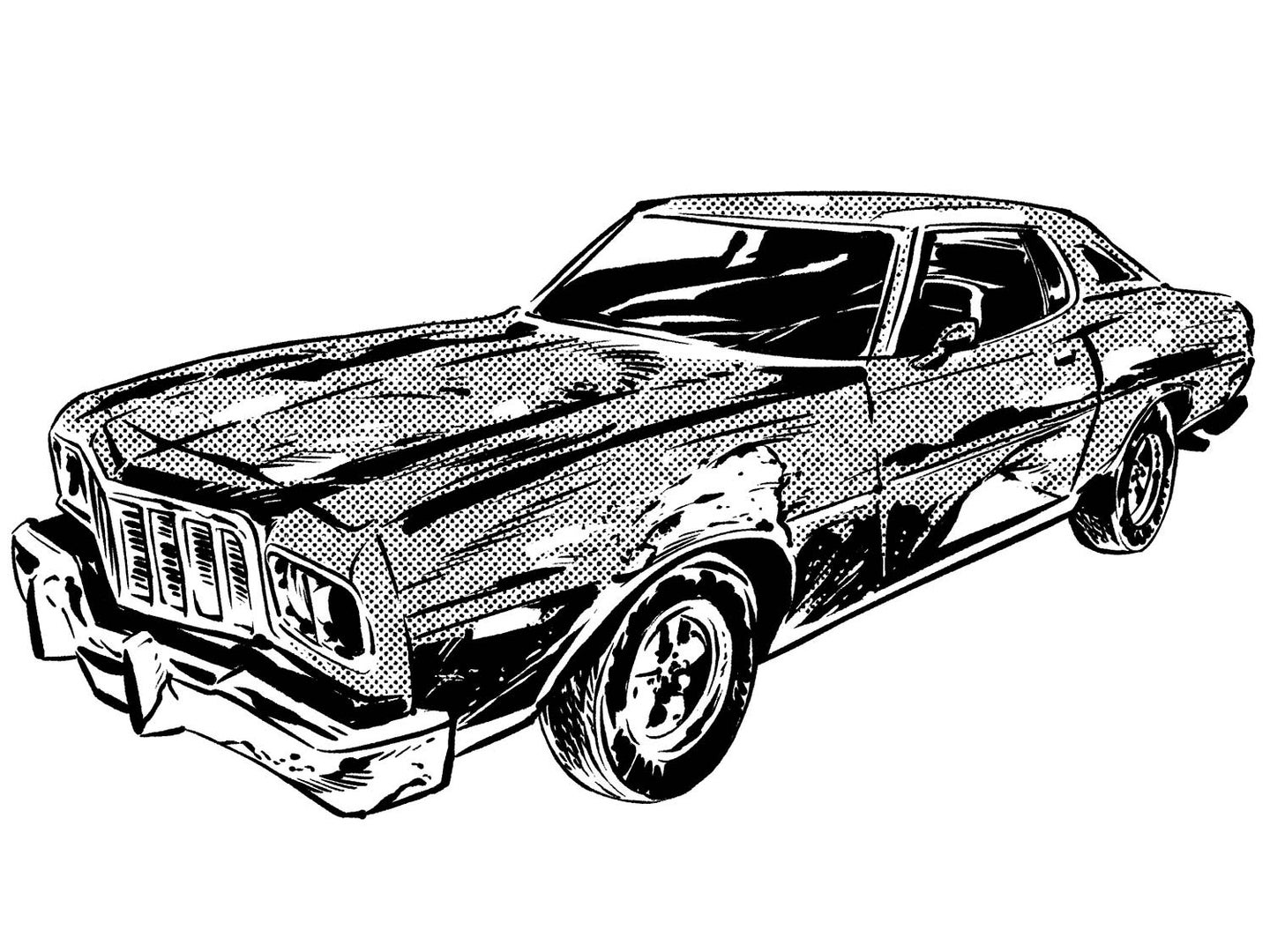 Way back when, the author and his buddy shared a hunting camp inside an old Gran Torino. Johnny Dombrowski

Can a car double as a hunting camp? If you like Hank Williams and Fig Newtons, yes

This story first appeared in the January 1998 issue.

BETWEEN THE smashed grill and the hole where a miniature chrome eagle once stood are the letters “F RD.” She (a car like this is always a she) is a 1975 Ford Gran Torino, a baby-blue road hog, and the stuff of dreams for small-town boys, aspiring mechanics, and demolition derby enthusiasts.

The 351 Windsor under the hood does not purr; it gargles and spits, and if you don’t drive this car with one hand draped over the wheel, you just don’t get it. She’s an all-American hunk of junk, held together with duct tape and coat hangers. And for my friend Paulie and me, for the past few years, she’s been our camp on the eve of duck season.

She was made for it. The upholstery is blue velour with thick bits of foam poking through; it’ll soak up half a cup of coffee without leaving a trace (try that with rich Corinthian leather). If I track mud in from the marsh, I just kick it through the hole in the floor. If Paulie blows a tire driving through a field, we just put on the spare, and when the hunt’s over, he goes back to UNEEDA Tire, and gets another one for $15.

And she’s a model of convenience. We fill her tank with gas and her interior with Fig Newtons, potato chips, beef jerky, and Dr Pepper, then cruise to the boonies, pull into the field beside the duck pond, and we’re camping. In the morning, we drag the canoe to the edge of the cattails, and we’re hunting.

It is true, however, that we’ve never gotten much sleep in the Torino. Usually, the night is spent wrestling with a mountain of gear (the trunk is already filled with what amounts to a mobile auto-repair shop). If I do fall asleep, I typically wake up 15 minutes later to retrieve a decoy from my ribs or take Paulie’s socks off my forehead. And it’s always cold.

But that’s okay. We don’t go there to sleep, really. Instead, Paulie digs out a Hank Williams Sr. tape, and we listen to the Drifting Cowboy moan about how much his life stinks. Feeling sorry for yourself is contagious, so we complain about how busy we’ve become, what a drag it is having to making a living…the usual stuff.

It can’t happen in a hotel or even in a new SUV—only in a car such as the Gran Torino, out in the sticks, at 2 in the morning. On those nights, Paulie and I are a couple of small-town kids with nothing better to do…and while it lasts, that’s all we want to be.