Huge, near-perfect bucks that have once held, or now hold, the whitetail world’s top honor 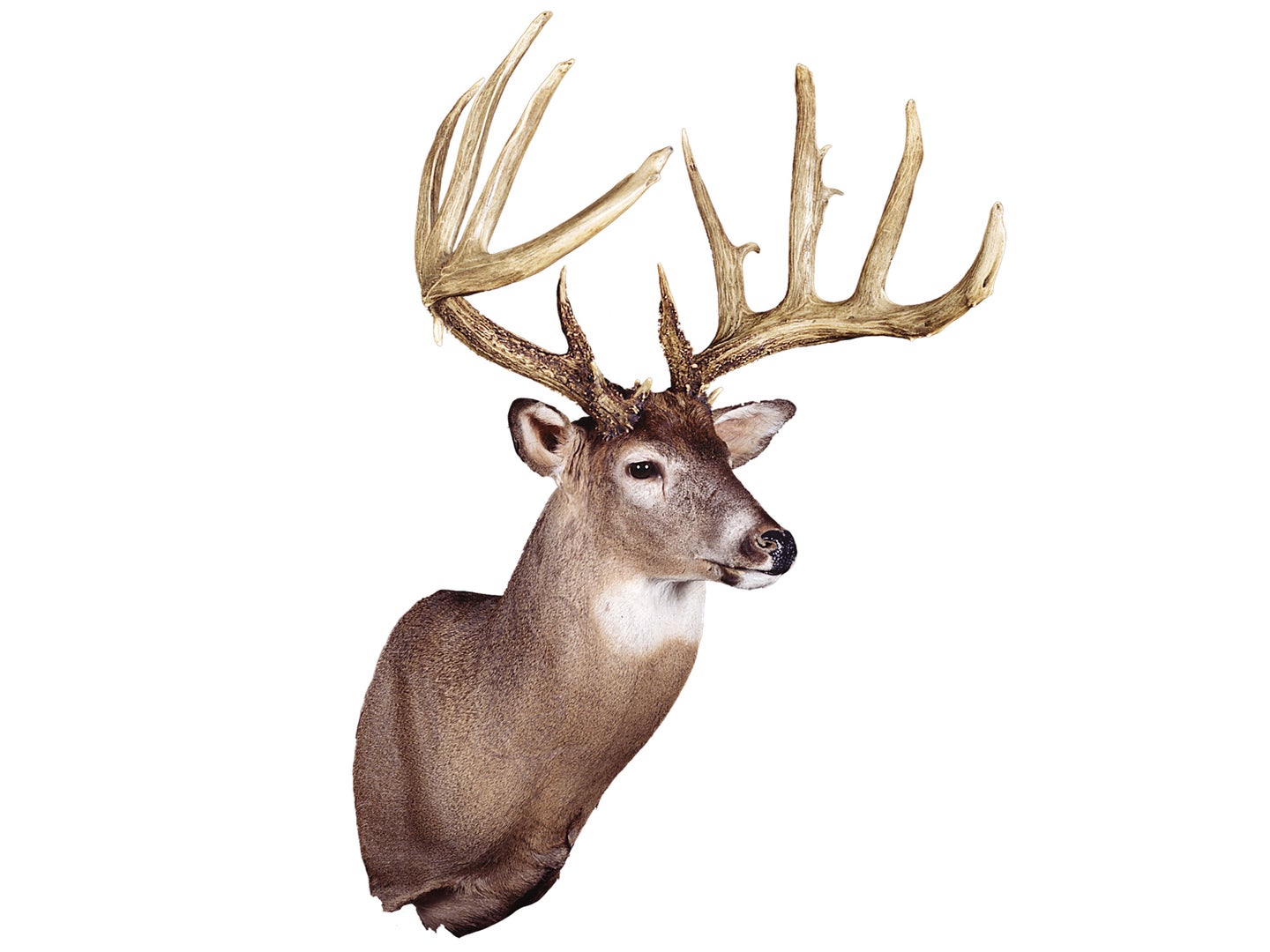 This is the first 200-plus-inch typical ever recorded by the B&C. Boone and Crockett
SHARE

Why is the typical world record the Holy Grail of whitetail deer hunting? After all, the non-typical record is more than 100 inches bigger, and there isn’t a hunter alive who doesn’t love “character” in a whitetail rack.

The simple answer is that the typical record is harder to break. The beautiful mess of a giant non-typical whitetail rack is amazing to look at, but a truly world-class typical rack is rarer. Consider that the P&Y non-typical world record has been broken twice since 2000, and the B&C hunter-killed non-typical mark has been bested four times since 2001. By comparison, the P&Y and B&C world-record typicals have stood for a combined 82 years.

Like it or not, the standards for scoring a B&C or P&Y typical whitetail are so stringent that they can turn a would-be world record into just another coulda-been-a-contender in the snap of a measurer’s tape.

That’s why the bucks below are so special. In addition to surviving the demands of the B&C scoring system, these eight world-record typical whitetails also trace the incredible growth of modern whitetail hunting, and the amazing successes of the hunters who took bucks most of us only dream about.

Few things prove the adage “timing is everything” better than the early B&C record book. Case in point is this great buck from the Canadian province of New Brunswick. When this whitetail was shot by an unknown hunter in 1937, at least a couple much larger typicals had already been taken (see the Breen and Jordan bucks below). But this Canadian trophy was measured first and therefore beat all others to the top of the B&C book. During the organization’s first awards period, B&C ranked whitetails according to main-beam length, and the NB buck had impressive beams indeed, at 31-6/8 inches. But even later, when the club began recording complete scores in 1952, still no other bucks had emerged that could top this heavy-antlered stud’s score of 180-6/8.

Three days after Christmas, Henderson Coquat was heading toward a patch South Texas deer cover to rattle up a buck when he looked up to see a huge whitetail running directly toward him. Unfortunately for Coquat, the buck spotted him at the same time and swapped ends in an attempt to escape. Unfortunately for the buck, Coquat kept his cool and made good on the last of three shots at the running whitetail. The super-wide 13-point rack has an inside spread of 27 inches and beams over 25. The buck’s net typical score of 185-⅛ pushed it to the top of the B&C typical whitetail category in 1953.

New York isn’t on the short list of states producing top-end whitetails these days, but in the late 1930s, the Empire State laid claim to the world-record typical. Roosevelt Luckey was making a series of drives with his hunting buddies in November of 1939 (during one of the state’s first modern deer seasons), when the group jumped a buck that looked like it had a tree limb stuck in its antlers. When Luckey finally dropped the buck with his shotgun, they found out that the tree was the buck’s antlers. The deer wasn’t scored until 1955, but once it was, it shot to the top of the typical list, with a net score of 198-2/8—still the largest typical ever killed in New York. Interestingly, it was later discovered that a 13-year-old boy had found the buck’s sheds from the year before; given an 18-inch spread credit (the same as the Luckey Buck rack), the cast antlers would have netted over 205.

The five P&Y world-record typicals that came before the Lloyd Goad buck serve as a reminder of how young modern bowhunting really is. Today, hundreds of 150- and even 160-class bucks are taken by archers every season. But in 1957, when New York’s George Ferber took just such a buck with a recurve and cedar shafts, his trophy became P&Y’s first world-record typical, with a score of 149-3/8. Ferber’s mark was bested in quick succession by a series of bucks that scored in the mid-160s. Then Lloyd Goad took the P&Y record to whole new level.

The Iowa archer had hunted for several seasons but had missed every shot he’d ever taken at a deer—until he connected on this monster 7×7, which obliterated the previous P&Y world record. Goad’s buck, taken from the ground with a recurve, scored just a few inches shy of 200, and included over 43 inches of circumference measurements.

Way back in 1918, John Breen was hunting the vast big woods of northern Minnesota, mainly to provide venison for his family, when he encountered a monster buck running with several does. It’s not clear whether he was thinking of the table or the trophy wall when Breen shot the giant deer, but his bullet dropped the first hunter-killed typical whitetail to break the 200-inch barrier. Breen knew the buck he’d tagged was special, but he had passed away by the time the rack was officially scored in 1960. Still, even four decades of shrinkage couldn’t diminish the incredible beams (both over 31 inches), towering tines (both G2′s and G3′s were over a foot long), and wide spread (23-⅝) of this Northwoods monster.

One of whitetail hunting’s most iconic trophies, Johnson’s “Beanfield Buck” has stood off challengers for the P&Y typical top spot for 55 years. Johnson had been a successful bowhunter for several seasons when he and a buddy secured access to an Illinois farm where they’d spotted several good bucks, including one that Johnson had seen twice, which was enough to know the buck was exceptional. Johnson was hunting from a ground blind on the edge of a large beanfield when that very buck appeared and worked to within 10 yards of the awaiting hunter. Johnson drew his recurve and made good on the shot, tagging a 6×7 that not only shattered the P&Y world record, but has remained among the top B&C typicals of all time.

James Jordan was hunting the Yellow River bottoms near Danbury, Wisconsin, in 1914, when he shot this massive 10-point whitetail. Like all hunters of his time, Jordan had no idea of how his whopper whitetail would stack up against other deer, only that it was the biggest he had ever seen. Wanting to preserve the trophy, Jordan gave the rack to a local taxidermist who agreed to complete a shoulder mount for $5. Through a series of odd happenings detailed in Gordon Whittington’s fascinating book World Record Whitetails (Safaripress.com), Jordan would not lay hands on the giant rack again until five decades later. Even then, Jordan had a heck of a time proving he was the rightful owner of the rack, and by the time that certification was complete, Jordan had died. His buck become the B&C world-record typical in 1978 and remains one of the most impressive whitetails ever taken, sporting incredible mass and symmetry, with only 3-2/8 inches of deductions.

As proof of how difficult it is to tag a top-netting typical, the Jordan buck had survived few serious threats in a 29-year reign as the B&C world record. All that changed in November 1993, however, when Saskatchewan farmer Milo Hanson rocked the whitetail world by taking a towering typical buck. Hanson was making drives with members of his hunting party when the group pushed a huge buck from cover. While several hunters shot at the buck, only Hanson’s bullets were proven to be true, and the easy-going farmer was suddenly famous. While Jordan’s buck relied on superior mass and remarkable beams in its path to the world record, the Hanson buck took a different route—tall tines and lots of ‘em. Much like the Jordan buck, though, Hanson’s had a mere four inches of deductions.