Has President Trump Kept His Word to Hunters and Gun Owners?

In a 2016 interview with F&S, Donald Trump made a lot of promises to sportsmen and -women and conservationists. Four years later, here’s a rundown of the ones he kept and hasn't met 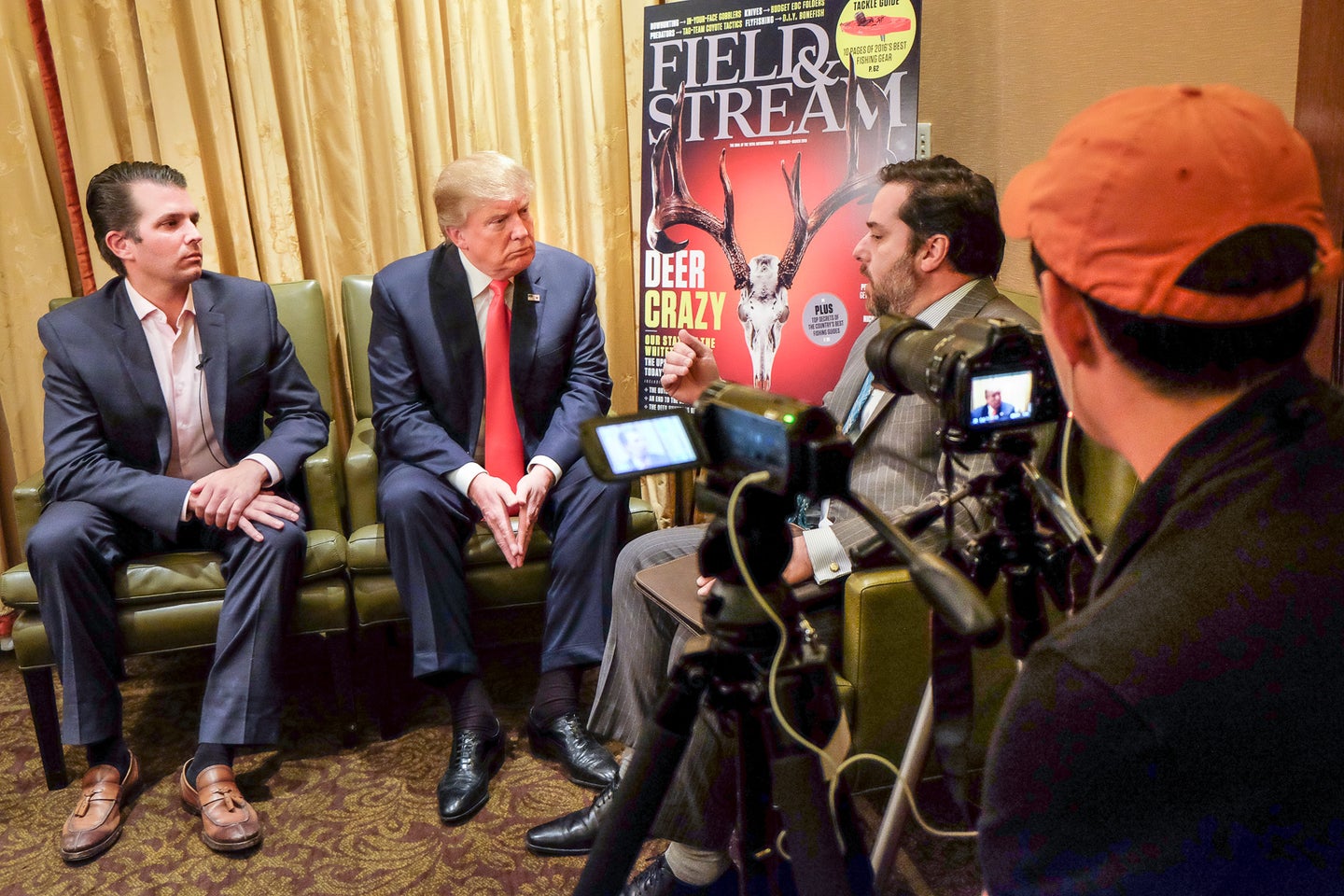 In January 2016, then presidential candidate Donald Trump traveled to Las Vegas to make an appearance at the annual SHOT Show. With the 2016 presidential election less than ten months away, Trump was making his case to be the leader of the free world, and agreed to a short interview with Field & Stream. He brought along his eldest son, Don, Jr., to talk hunting, fishing, guns, and conservation. During the interview, Trump identified himself as “a very big Second Amendment person” and made several significant pledges to sportsmen. Now, nearly four years later, with Trump campaigning once again, we have compared his promises with his actions in office.

Trump’s Pledge: In talking with F&S, Trump said, “We have to protect the Second Amendment.” To that end, he promised to reverse President Obama’s executive order requiring stepped-up background checks for gun purchases.

Trump in Action: In February 2017, President Trump signed a law revoking the Obama-era gun order, which had been criticized by the NRA along with the American Civil Liberties Union, for unfairly targeting certain Social Security recipients. A year later, after the mass shooting in Parkland, Fla., the president reversed course a bit, calling for a “powerful” bill on background checks; he also expressed support for raising the age to buy AR-style rifles from 18 to 21. But he acted on neither initiative.

Trump’s Pledge: In 2016, as now, the 640 million acres of public lands in the United States were under attack by legislators trying to transfer them to states, a move that would result in lost access for sportsmen. When asked about such transfers, Trump said, “I don’t like the idea because I want to keep the lands great, and you don’t know what the state is going to do,” adding, “We have to protect our lands.”

Trump in Action: President Trump has not presided over a full-scale land transfer, but his administration has nonetheless endangered public lands more than any before it. In 2017, the president ordered the two largest public-land reductions in U.S. history, shrinking Bears Ears National Monument by 85 percent and Grand Staircase-Escalante National Monuments by nearly half. The New York Times and Washington Post later revealed that the president acted at the urging of an oil company and a uranium-mining firm, both of which stood to benefit from the monument size-reductions. Iconic hunting-and-fishing destinations have fared no better. In 2017, President Trump lifted an oil-drilling ban in the Arctic National Wildlife Refuge, a pristine 19-plus-million-acre wilderness teeming with sheep, caribou, and grizzly. Similarly, in 2019, the administration gave a Chilean conglomerate the go-ahead to build a copper mine outside the Boundary Waters, threatening the trackless million-acre wilderness. Then, last month, Trump’s Army Corps of Engineers cleared the way for the Pebble Mine, which if completed would be a “death sentence for the planet’s last best salmon fishery.”

Some of Trump’s biggest blows to public lands have been regulatory. As of this writing, his administration has successfully reversed 68 land, water, wildlife, or clean-air protections, with another 32 similar rollbacks in process. These changes have opened up public wilderness for increased energy development and mining (more on this in a moment) while reducing federal oversight of such projects. In July 2020, for one, the Interior Department limited environmental-impact studies to one year and 150 pages, meaning that drilling and mining projects will be fast-tracked through permitting, with little research into their potential harm. Similarly, in 2018, the Bureau of Land Management—which is currently led by “an outspoken anti-public-lands zealot”—scrapped a planning reform designed to prevent energy exploration from endangering popular hunting-and-fishing spots and other “sensitive” tracts of public land.

Trump’s Pledge: In 2016, federal spending on land and wildlife management was near the lowest levels in decades. When asked whether he would allocate more money for public lands, Trump said yes: “The lands are not maintained the way they were by any stretch of the imagination. And we’re going to get that changed.”

Trump in Action: In July 2020, Congress, in a rare display of bipartisanship, passed the Great American Outdoors Act (GAOA), which President Trump signed into law on August 4. The GAOA permanently and fully funds the Land and Water Conservation Fund (LWCF), one of the nation’s best conservation tools, at $900 million annually, using royalties from offshore oil and gas operations. This change is significant in itself: Established in 1964, the LWCF has been fully funded only twice, with Congress having diverted some $22 billion from it over the years. But the GAOA also allocates $9.5 billion over five years to address maintenance backlogs plaguing national parks. “There hasn’t been anything like this since Teddy Roosevelt, I suspect,” Trump said upon signing the act. Senator Martin Heinrich, a New Mexico Democrat, concurred, telling F&S: “This is the first time I’ve worked on something that is truly on a scale that Teddy Roosevelt himself would be proud of.”

Trump’s Pledge: Trump told F&S that he believed “we have to be great stewards” of public lands but added, “I’m very much into fracking and drilling … I am for energy exploration, as long as we don’t do anything to damage the land.”

Trump in Action: That last part of President Trump’s quote—about not damaging the land—is the kicker. Once in office, Trump held to his support for energy exploration: In 2017 alone, his administration put 12.8 million acres up for auction, triple the amount from Obama’s second term. But his administration has not exactly been, in his words, “great stewards” in the process. The administration’s 100 environmental rollbacks include changes to the Migratory Bird Treaty Act (MBTA), a landmark, century-old conservation law. Because of the MBTA, BP had to pay $100 million for killing 100,000 migratory birds following the 2010 Deepwater Horizon Oil Spill. Now, with the rule change, oil, gas, and electric companies will no longer be penalized for such unintentional killings; billions of ducks, geese, and other migratory birds could die as a result. The Trump Administration has also lifted a public-land coal-mining ban, nixed fracking water-pollution regulations, reversed a law that kept coal debris out of streams, and ruled that mining companies don’t need to prove that they can afford to clean up their pollution before starting a project. None of this bodes well for wildlife, the public, or the lands themselves.

Go Hunting with His Sons Don, Jr., and Eric

Trump’s Pledge: At the end of his F&S interview, Trump said that, if elected, he would go hunting with his sons.

Trump in Action: President Trump has yet to hit the deer woods or chase pheasants with his sons, and, at this point, it seems unlikely that he will. Before the election, Don, Jr., told The New Yorker that, when it comes to hunting, “to try something new and to be an amateur again, that doesn’t appeal to [my dad’s] competitive side.” Moreover, in 2017, the Post dug up a 2012 tweet in which the president wrote, “My sons love hunting, I don’t.”

Promise kept? Not yet…