How to Choose the Perfect Waterfowl Shotgun

Learn the features to look for in a durable, reliable, and effective duck and goose gun. Plus, we pick 7 great waterfowl shotguns for every budget 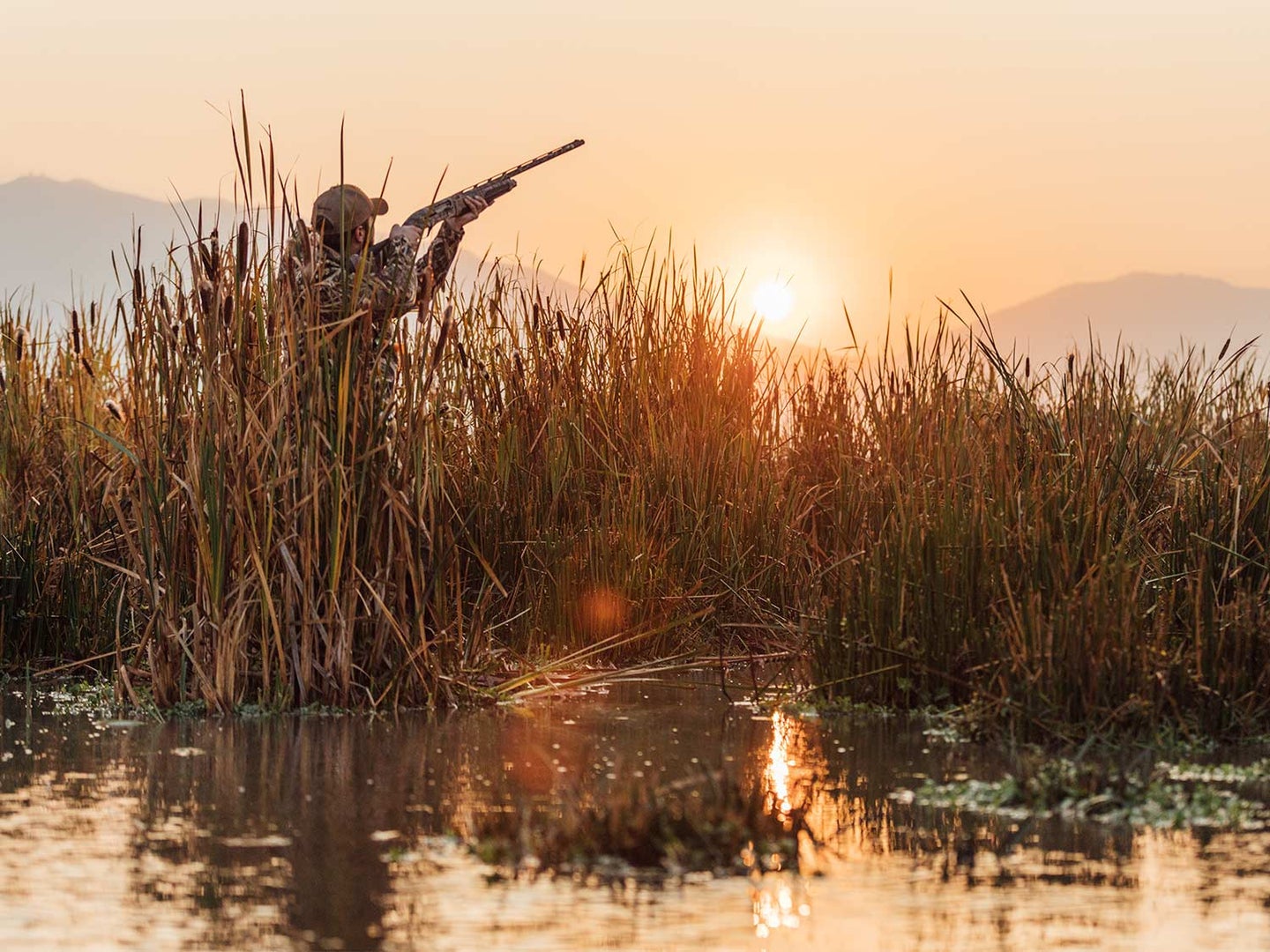 Caption: Having the right shotgun will increase your confidence in the marsh. Browning
SHARE

You can make the analogy that upland shotguns resemble sports cars—sleek, fast, and agile. It follows, then, that waterfowl guns are the pickup trucks of shotguns, built to deliver heavy loads in the worst conditions. Synthetic stocks, matte finishes, screw-in chokes, and improved mechanisms make the current generation of waterfowl firearms the toughest, most reliable ever. But you still have to make the right choices when it comes to specific shotgun features. Here are five keys to getting a great duck and goose gun.

Repeaters rule the marsh. For duck and goose hunting, a pump’s or autoloader’s three shots and one choke beat the double barrel’s two shots and two chokes almost every time. That third shell is worth a pack of retrievers for anchoring lightly hit birds and swatting cripples. Moreover, when hunting in a cramped blind, you can reload a repeater much more quickly and easily than you can a break-action gun.

Pump or auto? Pumps are cheap, durable, and keep on shucking in the worst weather. That said, modern autos function with such monotonous reliability that no one calls them “jam-a-matics” anymore. Simpler gas systems and cleaner-burning waterfowl loads render gun maintenance almost optional. And most important, autoloading actions dull the sting of the hardest-kicking magnum loads. An auto may hurt your wallet, but it’s gentle on your shoulder. Sticker shock aside, autoloaders are the way to go.

Throwing mass quantities of light, bulky steel pellets at ducks and geese requires a roomy shotshell. Hunters have three options: a 10-gauge, a 3-1/2-inch 12-gauge, or a 3-inch 12. The 10-gauge reigns as the King of Capacity. However, weighing 9-1/2 to 11 pounds, 10-gauge guns are too heavy for all-around waterfowling.

The real choice lies between the 3-1/2 and the 3-inch 12-gauges. The bigger 12 is more versatile: The 3-1/2-inch Roman candle loads offer near 10-gauge ballistics in a much more maneuverable shotgun, and you can load 3- and 2-3/4-inch shells in the big 12. However, the 3-inch 12 packs enough shot for 99.9 percent of duck hunting and all but the longest long-range goose shooting.

You almost never carry a waterfowl gun at port arms. It’s slung over your shoulder or cased and stowed in a boat or strapped to the back of an ATV. Extra gun weight won’t hurt here. In fact, it helps, by soaking up recoil. Pick a 12-gauge in the 7-1/2- to 8-1/2-pound range.

4. Choose the Right Choke for Ducks and Geese

In the days of lead shot, choosing a waterfowl choke was simple: You chose Full. Things aren’t so simple anymore. Steel, tungsten, bismuth, and Hevi-Shot all exhibit different patterning behaviors. Screw-in chokes and a few sessions at the patterning board are essential for figuring out which chokes to use with different loads.

For most waterfowl hunting, a Modified choke performs best as an all-around choice with most nontoxic ammunition. Open up to Improved Cylinder for close over-decoy or timber shooting, and tighten up to Improved Modified or even Full for pass shooting. Some custom choke manufacturers now simplify choke selection by offering aftermarket tubes designated “ducks over decoys” or “pass-shooting geese.”

Shots at ducks and geese tend to be long. A 28- or even 30-inch barrel smooths your swing and encourages a positive follow-through. Twenty-six-inch barrels will do, but anything shorter is too light in the muzzle, and deafening to the guy sitting next to you. Steer a wide berth around 21- to 24-inch barrels and, if you value your hearing, the people who shoot them.

Waterfowling tortures guns. They bounce on boat hulls, fall on rocks, sink in mud. Synthetic stocks may be ugly, but the abuse of waterfowling doesn’t make them any uglier, and they clean up with Armor All. You can’t say the same for wood.

A duck blind or goose pit is no place for shiny bluing. Go with a matte or camo finish to hide your gun from sharp-eyed birds. Sling swivels are a must for carrying the gun along with all your other gear to the blind; quick-detachable swivels let you remove the strap, which may otherwise hang up in the foliage when you rise to shoot.

The 7 Best Waterfowl Shotguns for Every Budget

What do we mean by “best”? We mean the ones I like best, of course. This isn’t an exhaustive list. There are many other quality guns out there to choose from. These are all models that I am very familiar with and recommend, particularly for the price.

People who own Weatherby’s SA-08 love it. It’s cheap. It’s light. It’s slim. It works. What else do you want? The black synthetic version comes in 3-inch 12 or 3-inch 20-gauge models with a choice of 26 or 28 inch barrels. Unlike most other modern gas guns, which shoot all loads without adjustment, the SA-08 comes with two gas pistons, one for light loads and one for heavy loads. It’s older technology, but it works, and if it puts a reliable gas gun in your hands for under $500, who are you to complain?

A Turkish-made inertia-operated shotgun, the 1012 survived a 5,000-round, no-cleaning, no-lubing torture test during development and suffered neither malfunction nor breakage. That’s impressive for any shotgun, and especially one that sells for roughly a third of what a high-end semiauto costs. The 1012 is very light for a 12 gauge, making it easy to carry and handle, but you’ll definitely feel it go off when you shoot hot, high-velocity magnums.

The latest model in the lineup that began with the Super X2, the X4 features an englarged bolt handle and bolt release, stock length spacers and an excellent recoil pad, while retaining the same reliable, easy-care gas system of the X2 and X3. The safety is big, easy to find, and reverses for left-handed use in a couple of minutes. TheSX4 comes in 3- and 3 ½ inch 12-gauge and 3-inch 20-gauge.

Now owned by Benelli, Franchi makes a line of inertia semiautos of its own that perform practically as well as Benellis but at a much lower price. The Affinity lineup of 12- and 20-gauge guns consist of black, camo, and walnut models, all with enlarged controls and magazine port and Franchi’s soft TSA recoil pad. Like all inertia guns, they shoot cleaner longer, and they have slim lines that make them natural pointers.

Beretta’s top of the line semiauto cycles everything from very light target loads to the heaviest 3½ inch magnums, all with very light recoil thanks both to its gas system and the shock-absorbing Kick-Off recoil reducer in its stock. It boasts enlarged controls to make it more ergonomic and a longer forcing cone and new extended chokes to improve pattern performance. Available in black and several camo patterns with 26-, 28-, and 30-inch barrels, it’s the state of the art in gas guns for waterfowl.

Long considered the last word in all-weather, all-condition waterfowl guns, the Super Black Eagle gets even tougher with Benelli’s new Benelli Surface Treatment (BE.S.T.), a coating of carbon particles that make the gun scratch- and rust-resistant even in saltwater conditions. In all other ways, it’s the same SBE3—reliable, light, slender, and with Benelli’s ComforTech stock to make 3½ inch magnum recoil more manageable. BE.S.T. guns come in black only, with either 26 or 28 inch barrels and a 25-year warranty on the BE.S.T.-treated parts.

The Maxus has a few unique features that set it apart from every other semiauto. It has a latch like an O/Us that replaces the magazine cap and doubles as a sling attachment and also gives the fore-end a trim profile, unlike those on most gas guns. The “Turn Key” magazine plug really does turn with a key, so you can pop it out for snow geese or an upland hunt and put it back just as easily. It’s a light gun, but the gas system and the Inflex pad help reduce felt recoil. The Wicked Wing version features camo stock and forearm; a bronze Cerakote finish on the metal parts that includes waterfowl scene on the receiver; an enlarged bolt release and choke tubes resembling goose bands.