How to Hunt Deer in 6 Kinds of Snow

Get your buck when the flakes fall, whether it's a light flurry or a full-blown blizzard 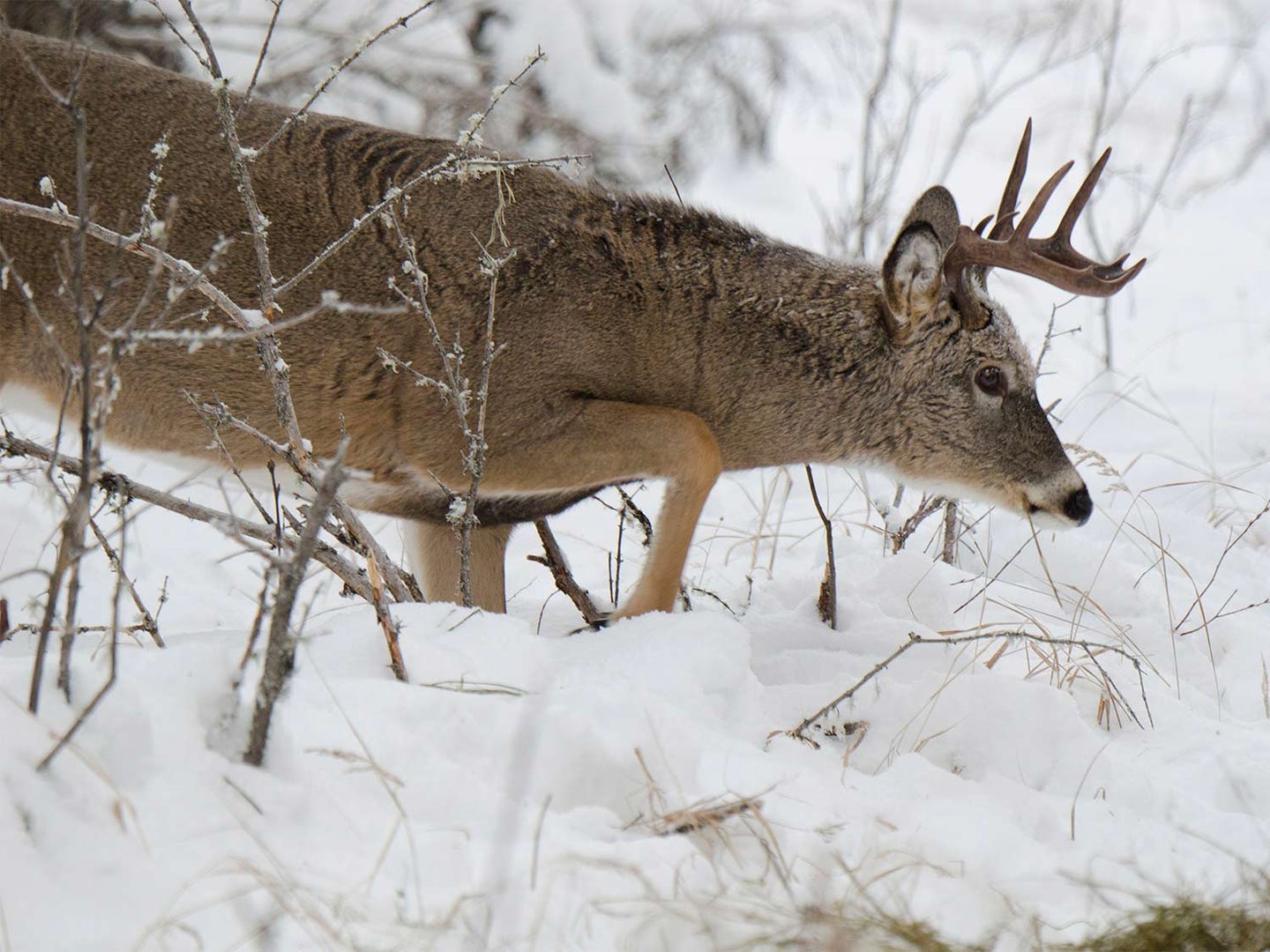 New snow can bring an almost magical fresh start. Suddenly, you can slip silently through the woods. Bucks are usually on the move and easy to spot. And when you connect, an obvious blood trail leads right to your trophy. For all these reasons, deer hunting in the snow can seem much more promising.

But not all snow is so helpful. A windblown blizzard can keep bucks bedded for days, for example, and crusted snow can have bucks fleeing your footfalls. Fact is, the white stuff comes in many forms, which affect deer behavior and hunter success in various ways. The key is to choose the right tactics, so that hunting deer in the snow is actually as full of promise as it seems.

Do Deer Move in Snow?

A lot of novice hunters will ask generally, “Do deer move in snow?” And the answer, of course, is yes and no. A better question would be “Do deer move in heavy snow?” or “Do deer move in the snow and wind?” It all comes down to the exact conditions. As a general rule, as long as snow isn’t too heavy, wet, driving, or deep, the precipitation and the cold temperatures that comes with it will spur deer movement. Not just during the weather event, but before and after, too. This is why serious hunters are usually happy to see fresh snow in the forecast. But there are exceptions to the rule, so here are 6 specific scenarios and how you should respond.

How to Hunt Deer in Powder Snow

Deer love to move in fine, light, dry snow. So, let them come to you by taking a stand overlooking a travel route. Be sure to avoid bedding areas, as late-season bucks are especially wary. Instead, speed-scout field or plot edges at midday to find the freshest tracks or trails leading to a major food source area. Then set up in the afternoon to ambush deer coming out to feed. Remember that this time of year, deer tend to bed close to the grub, and they may show up well before dark. So be careful and get set up early.

How to Hunt Deer in Wet Snow

Because this sticks to and dampens a deer’s coat, bucks tend to head for sheltering cover in these conditions. In most cases, that means conifers. Find tracks leading to small, precisely defined thickets and put on small drives. Or if you’re by yourself, carefully follow those tracks right to your buck—and be ready to see and shoot a buck jumping up out of its bed.

How to Hunt Deer in Crunchy Snow

Sleep in. Okay, it’s not quite that bad, but moving in these conditions is noisy and taxing for both deer and hunters. Go to places you don’t have to walk far to reach; and watch brushy fields, clear-cuts that offer browse, and south-facing slopes. Listen for the crunch, crunch, crunch of approaching deer.

Here’s a trick: Because crusty snow can make it so hard for deer to walk in, it gives you an opportunity to steer deer right into your ambush. Stomp down the crusty snow to form a path that leads to a major food source, and it won’t take long for deer to find it and start using it, which should put them right where you want them.

How to Hunt Deer in Deep Snow

When accumulations surpass 10 inches, bucks will typically bed down in dense conifers close to food or move to sunny, south-facing slopes. In some northern states, they’ll travel to yarding areas in softwood swamps. Still-hunt all these spots, using snowshoes if necessary. Glass ahead to try to pick out bucks bedded beneath evergreens. At a certain point when snow gets very deep, you may be faced with an ethical decision of whether to hunt at all. When deer are all but trapped in a very discreet yarding area by feet of snow, you may well decide that it’s best to leave them alone.

On the other hand, if they are still moving from bedding areas to feeding areas, the same trick above that works in crusty snow can work just as well when the snow is deep. Make a path where it’s easier for deer to travel, and they will follow.

How to Hunt Deer in Blowing Snow

Such conditions quickly rob deer of body heat. They’ll move to the lee sides of ridges and into hollows and valleys. These are great conditions for still-hunting because they concentrate deer in specific areas and because the wind makes it more difficult for deer to detect your sound and your movement. Try still-hunting these areas with a partner, one working 75 to 125 yards ahead of the other. Any buck that circles back behind the lead hunter may walk into the trailing hunter’s sights.

How to Hunt Deer in Gently Falling Snow

Gently falling snow is also ideal for still-hunting, as well as for tracking. New snow quiets your footfalls, covers old buck tracks, and reveals the freshest ones. Also, because bucks travel readily when the flakes are falling straight down, you can set up inside an enclosed ground blind near a staging area and stay dry, comfortable, and perfectly positioned to fill your tag.

Do deer move in a snowstorm?

During the heart of a snowstorm, when the white stuff is coming down hard and fast, and especially when it’s driven by wind, deer will stay on their bellies. But a snowstorm in the forecast still promises some good hunting that you should take advantage of. Deer will often feed heavily ahead of a storm and right after a storm, after the wind dies. They may also move well early in a storm, as it’s building. All of these are excellent times to hunt a stand near a good food sources, or along trail leading to one.

Where do deer go when it’s snowing?

In light snow, deer will typically bed, feed, and travel in their usual places. In heavy snow, they’ll likely take cover under conifers or other thick cover with overhead protection. In snow and wind, they’ll often move to the lee sides of hills and ridges. And in deep snow, big-woods deer may actually make small migrations to traditional yarding areas, usually in dense, low-lying conifers.

What is the best snow for tracking?

The best snow for tracking deer is 3 to 6 inches of fresh, somewhat heavy snow—as snow that’s too powdery or dry tends not make the most distinct tracks. New snow tells you exactly how fresh any track you’re following is, and a snow depth of less than a foot is ideal for covering ground, which is usually required in the big-woods habitats where tracking is most often done.