Why Are Early Wood Ducks and Teal So Tough to Shoot? 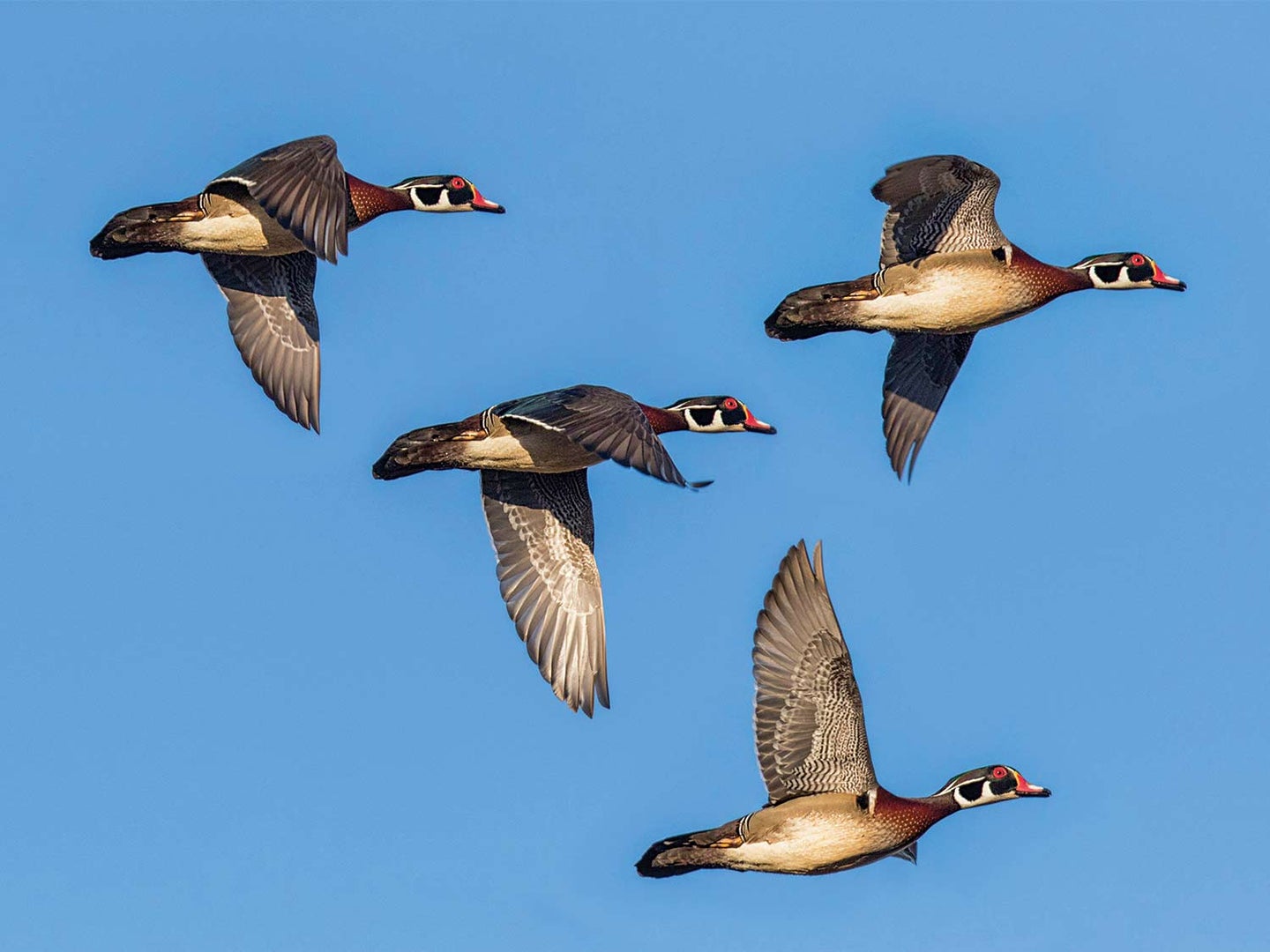 The teal boiled over the far edge of the Arkansas ricefield, each flock a giant smudge on the horizon that formed and dissipated and reformed into the shapes of giant black commas and dark towering thunderheads rising above the distant trees. I needed three more birds for a limit. There might have been 600 in a single flock. I tried not to look at the ground because, at my feet, spent shells littered the rice dike—their sheer volume a ­candy-­apple-red reminder that I should have spent more time on the skeet range over the summer.

I’ve never thought it was fair to start off this way. You’d think the early birds would be gimmes, but they are not. There should be an easier on-ramp to duck season. Snow and ice were months away, and most hunting seasons hadn’t even opened. I hadn’t gotten my groove back yet, but these teal couldn’t have cared less. They were living it up in a world of waste grain and bugs.

Now another inkblot of feathers rose off the September sheet water, swirled for a moment as if gathering its wits, and streamed straight for the decoys. I tightened my hands around my shotgun. This looked like a repeat of the first teal flock to swing my way: Empty blue skies were suddenly filled with shotgun blasts, feathers, and hoots and ­hollers—and there was not enough to show for it. Not on my end of the blind, at least.

One thing I have discovered from shooting over, under, behind, and occasionally dead-on at teal is that you learn more from shooting tough birds than just how to make the hard shots. Missing will bring out the whining worst in a hunter. Or it can fuel improvement that might not take place otherwise. I can’t say that I’ve never pouted over a poor showing in a duck blind, but after 40 years of swinging a shotgun, it’s still easy to admit that I have more work to do.

The previous duck season, I’d suffered through several rounds of whiffs on wood ducks jumped from a canoe. My first two shots wouldn’t cut a feather, then I’d connect with the third. I gave myself the usual lame ­excuses—the boat rocked as I shot, the cut brush bumped the barrel—but I knew something else was going on.

One day I made a drawing, sketching the angles of the boat, duck, water, and shot. And there in No. 2 pencil gray and white was the answer: A flushed duck lifts straight off the water and continues rising for a few wingbeats, but it doesn’t launch at full speed like the clay target in a springing teal station. If you’ve been sneaking up on ducks, shotgun butt to your shoulder and ready to pull at the flush, you’re likely going to fire the instant that duck twitches. I had been—and I was overshooting the bird. Once I turned off my hair trigger and let the ducks flap a few times skyward, my first-shot shooting percentages went skyward as well. Struggling can be a blessing, and sometimes you simply have to push through the slumps.

Wood ducks, in fact, have handed me more homework than teal. Woodies don’t fly in the great, big, logic-defying bunches teal do. Instead, they arrive by the twos and threes and the occasional half dozen, and when they come, they come in twisting and turning, screaming and squealing, wild-eyed with those blood-red retinas like they’re just off an all-night Four Loko bender.

You May Only Have Minutes To Bag Early-Season Wood Ducks

Jack and I had hiked into a small river I’d scouted earlier for woodies, so I knew where a calm pocket below a logjam had sucked in a dozen birds at early light. I worked my way across the logjam while Jack posted up on the riverbank.

Wings whooshed overhead. With five minutes to go before shooting light, the woodies rained through oaks still holding on to every leaf. I’d seen this before. Jack was about to witness a full-blown wood duck spectacle. When my phone alarm buzzed at legal light, I had ducks within 5 feet of my boot tops, wood ducks overhead in every direction, and I didn’t know which way to turn.

Upstream, Jack’s muzzle blasts flashed like lightning. I had moved to the middle of the creek in the hope that incoming birds would be silhouetted against a slice of open sky, but the woodies seemed to know that play, and they swarmed over the oak canopies, banking hard right and left at the last second to skid onto the open water, squealing like banshees.

I swung and pulled on mere flashes of white underwing, blurs of smoky silhouettes through the branches, and birds flushing from the water with the report of the shotgun. One bird down and dead, and I told myself to hold off and wait for the light, when it would be so much easier, but there were so many ducks and so many other times the woodies had suddenly vanished into the ether. I poked, pulled, and shot. Forget focusing on beaks. Two ducks down, and my shell pockets grew lighter by the second. Upstream, Jack’s shooting slowed to an occasional pop. I glassed the creek banks to make sure I hadn’t overlooked a cripple. One more to go.

It was over in five minutes. It was still too dark to read a newspaper. Jack walked up, shaking his head.

“Let’s say often and leave it at that.”

We wound up with a two-man limit and pockets overstuffed with empty hulls. Plucked and breasted, that’s 12 breasts at 4 ounces each, tops. Call it 2½ pounds of wild meat. Factor in shells, guns, lease fee, licenses, and a barbecue stop on the way home, and I’d tag the take at $833 per pound. But early-season ducks are a bargain at any price. Even when they come with a side order of humble pie.