How to Jumpshoot a Whitetail Buck 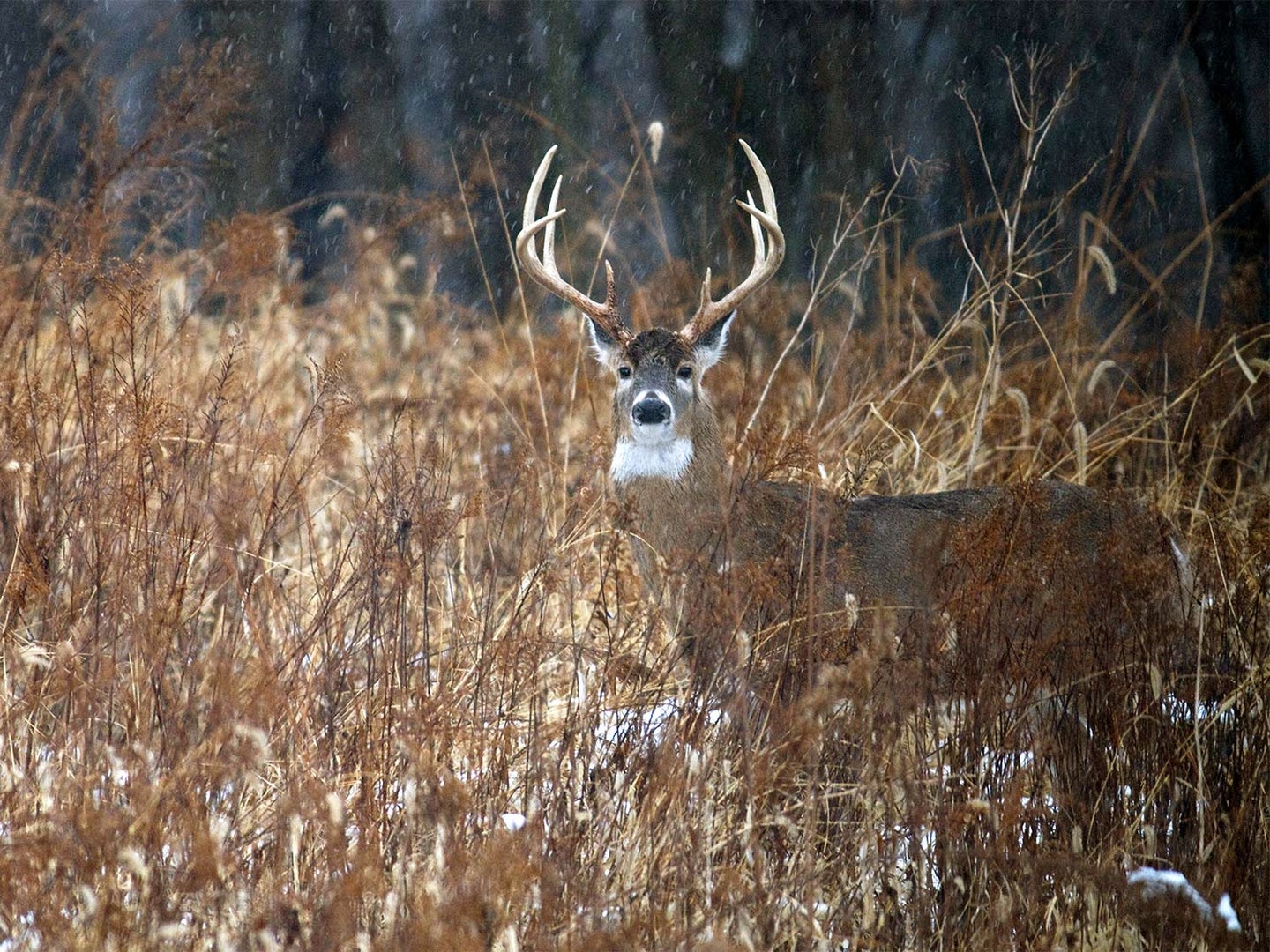 Tired of waiting in a stand? Too cold to sit still for hours on end? Try jump-shooting a buck. This is one of my favorite tactics when I’m exploring new territory and want to cover a lot of ground, but it’s also great on a known hunting area later in the season, when you’ve pushed bucks around and don’t know exactly where they are. Here’s how to do it.

How to Jump a Buck

Unlike still-hunting, you don’t ease along slowly, stopping to peer into every thicket. Instead, you walk at a normal clip, scanning the cover for movement. Your goal is to detect a buck just as it’s rising from its bed or starting to run—in time to take a clean-killing shot.

A casual walking pace seems to make bucks underestimate the danger you pose, perhaps thinking you’re just a hiker or logger. Some bucks will even try to sit tight and let you walk past them. But occasional pauses near the thickest brush will make these bucks stand up.

Where to Jump a Buck

You need a balance of cover. The vegetation should be thick in spots but open in others so that when a buck rises, there’s some opportunity for a shot. Likely spots include brushy, semi-open creekbottoms, hollows, and draws; swampy areas; and isolated, overlooked pockets of cover [deleted section]. In hill country, check out blowdown-strewn benches just down from the tops of ridges.

How to Make a Quick, Clean Shot

The key to making a quick shot is to always be ready to shoot. Carry your gun at port arms, safety on, scope at its lowest power setting. When a buck jumps up, flip the safety off and bring the stock snugly to your cheek. Find the crosshairs. (If you’re using open sights, concentrate on the front bead or post). Aim at the vitals and pull the trigger. Do not lead a running buck at short range; aim right at the front shoulder and shoot.That said, always be prepared to pass up shots. If you don’t have a good chance for a clean kill, hold off. Eventually a buck will give you that extra split second you need. —G.A.

Your regular deer rifle will work just fine for jumpshooting deer, as long as it’s not too heavy or bulky. You can simply turn the scope down to its lowest power and have at it. But carrying a specialized rig that’s made for quick, close-range shots is an advantage—and it gives you an excuse to buy another gun.

First and foremost, a good jumpshooting rifle should be compact and lightweight enough that you can bring it bear quickly in tight cover. If it also makes for quick follow-up shots, so much the better. That’s why levers, pumps, and autos are all good options, but a handy bolt-gun isn’t a liability if you’re practiced with it.

As for sights, a ghost-ring rear sight or red-dot gets you on target fast. Either is a fine choice, but I’ve tested these and other sights head-to-head for speed and accuracy with multiple shooters, and a low-power scope with an illuminated center-dot reticle always comes out on top.

No matter what sight you choose, here are four great rifles for jumpshooting deer.

No deer rifle carries easier and points faster than the Model 94. The Carbine and Short Rifle versions come with a 20-inch barrel, weigh well under 7 pounds, and are chambered in .30/30. The current-production Short Rifle comes drilled and tapped for a scope, if that’s your preference, but to me the 94 was always meant to go scopeless. I’d put a ghost-ring on it.

Another iconic brush gun, the 336C weighs just about 7 pounds, has a 20-inch barrel, and is chamber in .30/30 and .35 Remington, an outstanding big-woods round. Besides the standard model, there are a host of special versions, including a 16.5-inch-barreled carbine. I wouldn’t hesitate to put a scope on this one.

With a lightweight alloy receiver, composite stock, and 18-inch barrel, the BAR MK 3 weighs only a little over 7 pounds. It’s chambered in .308 Winchester and comes with a detachable box magazine and Picatinny rail. This one is a tad bulkier than the other rifles here, but it handles well, points fast, and offers the quickest follow-ups.

If you just got to carry a bolt-action, you won’t find one handier than the 4-pound, 13-ounce Kimber Adirondack. Chambered in 6.5 Creedmoor, 7mm/08, and .308, it has a reinforced carbon-fiber stock, a Pachmayr Decelerator recoil pad, and an 18-inch stainless barrel that’s threaded for a brake or suppressor. Top it with a 1-6x or 1-8x scope with illuminated center-dot reticle, and you’ll be set up well for quick shots at jumped bucks. —D.H.