How to Tag Your Dream Elk

After years of trying, the author finally killed his first bull. And it happened just as he’d imagined it would 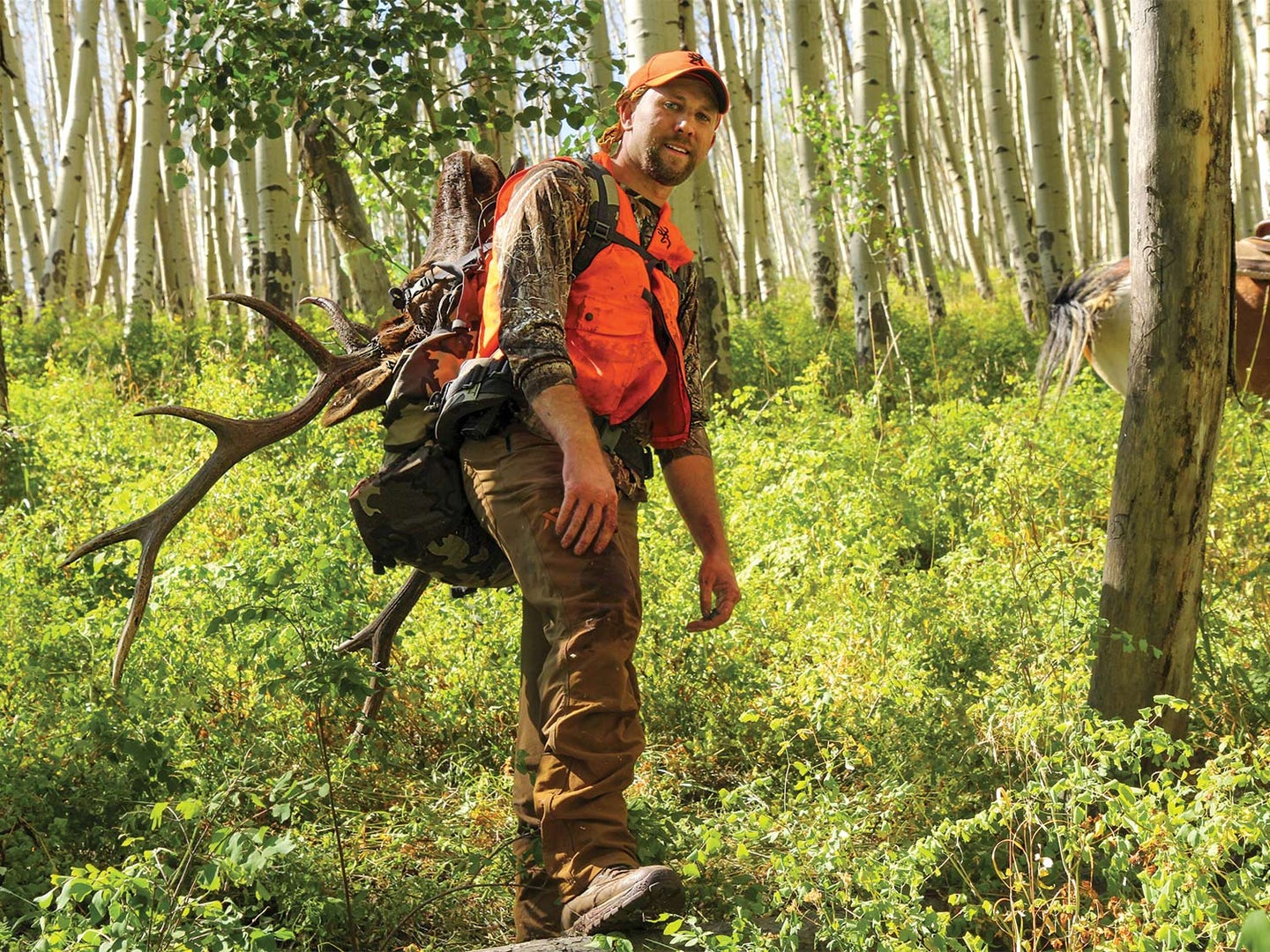 For a fee, Travis Reed and Miles Fedinec of Western Sky Outfitters will treat you to a week of misery in Colorado’s San Juan Mountains. There are no showers and only restless tent sleep. You’ll burn so many calories each day that you’ll eat about anything when you get back to camp, which may be why the highest praise I’ve ever heard about the food there is that it’ll make a turd.

Their hunting camp is not for everyone. But in September, it sits in some of the finest elk country anywhere. It’s all public land but not pressured much, because you really need horses and mules to pack the 10 miles in. Still, it would be bad form to hunt the place, kill an elk, and then share GPS coordinates to it online.

I’ve had a rough go at elk. Several years ago, I drew a cow tag in my home state of Kentucky and spent a couple of weeks floundering around trying to fill it. I never came close. I didn’t get one in Idaho, where we rode a train of farting mules into the mountains each morning before daybreak, glassed empty hillsides all day, and then rode back down in the dark. In New ­Mexico, there were elk everywhere, but that didn’t seem to make a difference. On the last morning, before we left camp, I got to take a picture of all my friends smiling with their trophy elk racks. I was the perfect cameraman since I was the only person in camp who hadn’t shot a bull.

In all of my trips, the closest I’d ever come to killing an elk was in a drainage near this Colorado camp a few years ago. I was hunting on an over-the-counter archery tag, and Fedinec was guiding me. I drew my bow on two different bulls that he called up during the week, but I didn’t get a shot at either of them. It haunts me. Since then, whenever I imagine a bugling elk, I see it standing among the white aspens in this very spot. I don’t want to just kill my first elk. I want to kill my first elk right here, in September.

After a two-year wait, I’m back within walking distance of that drainage, this time with a muzzleloader tag. The forecast promises a crisp opening morning. I have just one more hurdle to clear: The drainage is Fedinec’s favorite spot, and he has two other hunters to guide. I’m on a drop-camp hunt, which means I’m hunting alone in the morning and only where he tells me to go.

He picks his teeth with a pocketknife while I look at him as if awaiting word from a prophet. “Brantley, you redneck son of a b-tch,” he finally says, “if you wander around in the dark long enough, do you think you can find that drainage where you scared all those bulls off a few years ago?”

It’s all I can do not to leap from the table and start hiking up there right now, but I collect myself. “Oh, if you want to send me to that gar hole again, I guess that’d be O.K.”

Read Next: How to Build the Best Muzzleloader Rig for Western Big-Game Hunting

I’m in among them as soon as shooting light breaks. After a couple of hours, I’ve had close calls on two bulls. When a third bugles from deep within the drainage, I check the wind and scramble over the break of the ridge. I can see the open slope on the opposite side, and I’m pretty sure that’s where the bull is. It’s not the best place to set up, but it’s the best I’m going to get. Backing up 50 yards, I take a seat next to an aspen, prop the open-sighted CVA Accura on my knee, and make a might-as-well-try mew on an open-reed call.

The last thing I expect is for the bull to launch himself into a bugling frenzy, growling as he charges down the opposite hillside and up the ridge right to me. But that’s just what he does. He even lopes to a broadside stop 30 yards away.

The smoke lingers a minute over the drainage, and I go sit next to the elk, just to look at him awhile. It’s only after I’ve gutted the bull and shouldered my pack that I look around and realize I’m standing in the very place where, for years, I’d been envisioning this very moment. I pull out my GPS and drop a waypoint so we can bring the horses to him, and I send an ­inReach message to Fedinec and my wife, Michelle: Bull down!

Even with the horses, it’ll be an all-day job getting my elk out. On a peak above the drainage, Fedinec and I dismount and lead the horses into the vertical hell below, where it’s too dangerous to sit in a saddle. On some of the peaks here, there’s enough cell service to check in. Fedinec declares that he has one bar and stares at his phone. Then he looks at me and says, “I might have to kill your wife.”

Michelle has shared a screenshot of my earlier inReach message on Facebook with a post that says, Somewhere on a mountain, among those trees, the hubby is quartering and packing out an elk. It’s innocent enough, except that the whole purpose of an inReach message is to show a map of exactly where the sender is—which in this case is in the middle of public elk nirvana.

I have a satellite phone in my pack, and I’ve told Michelle that I’d only be using it for emergencies. When I dial her up at work, she answers in a panic until I grill her about the Facebook post. Fedinec is leaning over his saddle horn, eavesdropping intently.

“What I ought to do is slap the s–t out of you both,” she says. “Look at the post again, and give me a little credit. I cropped out the coordinates before I posted it. And by the way, congrats on your first elk. Took you long enough.”

It’s nearly dark before we’re back at camp, my elk quarters hung up in game bags and covered in pine boughs. Slabs of backstrap steak are sizzling in butter, and there’s enough to share with everyone, with some lukewarm whiskey on the side. “That’ll make a better turd than usual,” Fedinec says when I hand him a plate. “So, you like my elk spot?”

“Miles, I’ve traveled the country for elk, and that might be the best gar hole I’ve hunted,” I say. “I’m glad the entire world doesn’t know where it is.”