How to Plant the Ultimate No-Till Food Plot

You don’t need expensive equipment to put in serious food plots. Wisconsin expert Jeff Sturgis shares his secrets for growing brassicas, cereal grains, and even beans and peas on the cheap 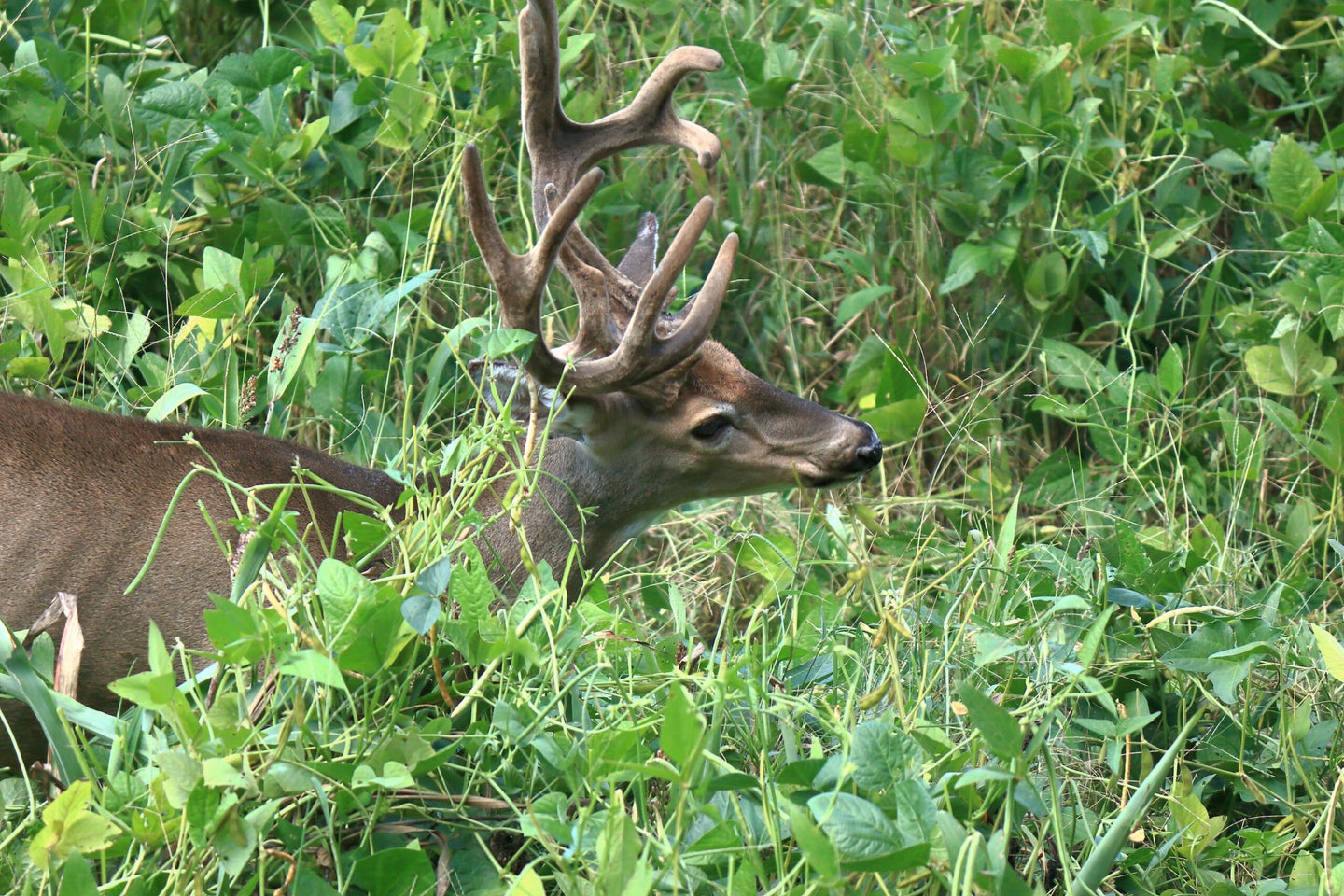 A velvet buck wades through a late-summer field of forage beans. The Whitetail Institute
SHARE

When the food-plot craze was just gaining steam, there were all sorts of articles like this one promising easy-peasy plots whipped up in a jiffy with nothing more than a sprayer, a few hand tools, and a bag of seed. It sounded so good, I about ran to my small hunting lease, rake in hand.

What I found was that, sure, you could do it, but the results were hit and miss and from a bust-your-butt standpoint, even the smallest plots ranged from pretty brutal to god-awful, especially if you wanted to plant larger seeds, like beans, peas, or corn.

So what’s changed? Well, you’ll still have to put in some time and work, but you can grow more deer grub with less of both these days. We’ve come a long way since I started, particularly in the area of no-till plots suited for the majority of hunters, who don’t have a lot of expensive equipment. Over the last couple of decades, Jeff Sturgis, founder of Whitetail Habitat Solutions (check him out on YouTube) and author of Whitetail Success by Design, has perfected an Ultimate No-Till Food Plot system that makes even good-sized soybean plots manageable for just about anyone. In fact, you don’t even need the rake.

Why You Should Try No-Till Food Plots

First off, no-till plots are easy—at least comparatively so. Even Sturgis, who now owns all the equipment needed to make large traditional plots, has 14 acres and counting of no-till on his own properties this year. “No-till is so much more efficient,” he says, “and the results I get are just as good.” Ironically, now that he owns the big tractor he once dreamed of, he uses it mostly around his house. “I’d rather do no-till on my hunting properties.”

Sturgis accomplishes most of his food-plot work with nothing more than an ATV with sprayer and cultipacker attachments and a hand spreader. But you don’t even need that to get started. “A backpack sprayer, a hand spreader, and the right timing is really all you have to have,” he says. “You might be limited to certain crops to start with, but you can have great food plots right now.”

There’s another big advantage. “With no-till, you’re building that top layer of soil instead of ripping it apart,” says Sturgis. Discing and tilling erodes the topsoil via wind and runoff, whereas simply killing the existing vegetation leaves decaying debris and root systems that hold the top layer together while returning nutrients to the soil. “You’re not drying out that top layer, either,” he adds. “The dead vegetation acts as a mulch and retains moisture, so you get higher germination rates.”

There’s no getting around the fact that no-till involves a good deal of spraying, and therefore a good deal of chemicals. But Sturgis sees it as a tradeoff. “No practical method is perfect. Traditional food plots usually involve some chemicals, too. With no-till, you’re not going to use anywhere near as much fuel, and you’re improving instead of stressing the soil over the long term.”

The key to Sturgis’ no-till system is buckwheat. For decades, people have used it as a summer crop to improve the soil and prevent erosion. Sturgis’ eureka moment came when he discovered that he could plant directly into the standing buckwheat and then crush the plants down over the seeds, creating a mulch. It worked perfectly—and not just for small seeds like brassicas and cereal grains, but for bigger seeds like beans and peas, too, which typically need to be covered by soil. All without ever having to till the ground.

Sturgis now uses this method for the vast majority of his no-till plots, typically planting half of a prepared area with a brassica blend and the other half with beans and peas, then rotating the sides each year. The fact that it’s July 1st as I write this means that you may have to wait until next year to implement his full program, depending on your situation. If you already have an area prepared, you should be good to go. But even if you don’t, it’s not too late to have successful no-till plots by fall, says Sturgis. “For some crops, you can simply skip the buckwheat step this year and plan to pick it up next spring.” Either way, you need an area where the vegetation has been killed off and there’s some bare soil showing. So, let’s start there.

How to Prepare a No-Till Food Plot

Suppose we assume the worst, and you’re starting with an open area of ground that hasn’t been worked in years. You’ve got thick grasses, ragweed, goldenrod, and the like to contend with. In this situation, Sturgis will do three sprayings of glyphosate (2 quarts per acre, diluted), four weeks apart. “Usually, I’ll spray first in May, then mid-June, and again at the end of July.” He also adds lime and fertilizer as needed during this span. “By early August, that area is ready to plant.”

You have some wiggle room, however. If your area has been worked recently or isn’t too thick with vegetation, you can likely get away with fewer sprayings. And if you’re getting a late start, like now, you may be able to compress the time between sprayings and still get a decent plot. “The key here is getting 50-percent soil exposure, meaning that throughout the plot, roughly half of the soil is open and visible,” says Sturgis. You can move some plantings back to mid or late-August or even September if needed. So don’t let a late start stop you.

Once you’ve got 50-percent or better soil exposure, you can sow small seeds right over the plot and walk away. This means that if you don’t have time to plant buckwheat this season, you can go ahead and broadcast brassica, clover, chicory, or tillage radish, as well as rye, wheat, or oats right away and have a good plot by fall. “In this situation, I’d put down 6 pounds per acre of a brassica blend I use from Northwoods Whitetail Seed,” says Sturgis. “You don’t need to disc or pack any of these seeds, although it can help if you can time your planting ahead of some rain.”

Sturgis typically puts his brassica plots in around the middle of August, and then follows that up four or five weeks later with a top-dressing of rye or wheat. “If you’re very late getting started, you can even skip the brassicas and just go with rye or wheat,” he says. “Put it in thick—200 to 300 pounds per acre. Do the same if your brassica plot fails. I’ve planted a really good crop of rye as late as the end of September, and the deer love it.”

Everybody wants bean plots on their property. But big seeds like soybeans, peas, and corn need to be planted anywhere from a half inch to an inch and a half deep, and that’s a tall order if you don’t have either a plow and a disc or a seed drill. That’s where the buckwheat really shines. “I’ve tried other smother crops,” says Sturgis. “But buckwheat is the only one I’ve found that allows you to create really good no-till beans plots.

Once you have 50-percent soil exposure (and assuming there’s enough time), you can simply broadcast 50 pounds per acre of buckwheat right on the ground with a hand spreader. If you can plant it before a rain, great, but there’s no need to cultipack it. Let the buckwheat grow for 7 weeks, until it’s 2-1/2 to 4 feet tall.

Next, sow your beans right into the standing buckwheat. “At the soil level, you’ve got nothing but stalks and exposed dirt, because the buckwheat has shaded out most weeds. The seeds will drop down right to the ground.” Sturgis’ bean plots are actually a mix of 50 pounds per acre of forage soybeans, 100 ppa of peas, and 20 to 30 ppa of oats.

After broadcasting that mix with a hand spreader, it’s time to knock down the buckwheat, which brings us to what makes this smother crop so special. “It crushes very easily and lays flat over the seeds, essentially taking the place of the soil you’d normally cover them with.” Sturgis uses a pull-behind ATV cultipacker to level the buckwheat but says you can simply use your ATV tires or even a homemade drag of some sort.

Once that’s done, you spray 2 quarts per acre of glyphosate over the plot. “The buckwheat breaks down fast, so enough sun gets through to the seed,” he says. “Meanwhile that decaying buckwheat is like straw that you put over grass seed; it holds moisture, and you get great germination rates.” Don’t be tempted to mow the buckwheat after broadcasting the seeds, he warns, as it can clump up, shade out the seeds, and hamper germination (especially if you are using the buckwheat method with smaller seeds like brassicas).

The next two steps are to wait, and hunt. The forage beans and young rye will be big draws for early-season deer. If you plant the beans on the late side, they may never produce pods, but they’ll continue to have green growth well into the season, when other green forage can be scarce. The brassicas should become a major draw starting in early to mid-October and continue to pull in bucks into the late season. Sound good? Then it’s time to run out to your property, backpack sprayer in hand.

I’m putting in no-till plots this summer with nothing but a backpack sprayer and a hand spreader. Sturgis’ equipment is a little more sophisticated—but not a lot more. Everything he uses is well within reach of most hunters. Here’s a breakdown.

You don’t need an ATV, but it sure helps. Yamaha

If you can afford the new one, hey, more power to you. If not, don’t worry. Sturgis bought his Yamaha Grizzly 700 used for a little over $3,400, which works great. I’m looking at a suitable used ATV right now for half that.

If you want to spray larger areas in less time, this is a great investment. A Fimco 25-gallon model with 7-spray boom runs a little under $400.

Sturgis has been using this 4-foot roto-molded ATV/UTV pull-behind model for years. It’s durable, lightweight to transport (you fill it with water on site when you’re ready to use it), and it’s relatively affordable at $535.

A hand spreader is all you need to plant acres of plots. EarthWay

Sturgis has seeded acres and acres of food plots with this $50 bag spreader. It has a 20-pound hopper capacity and an adjustable shoulder strap.