Want to have your best turkey season ever? Then up your scouting game. This step-by-step plan will have you into gobblers all spring. 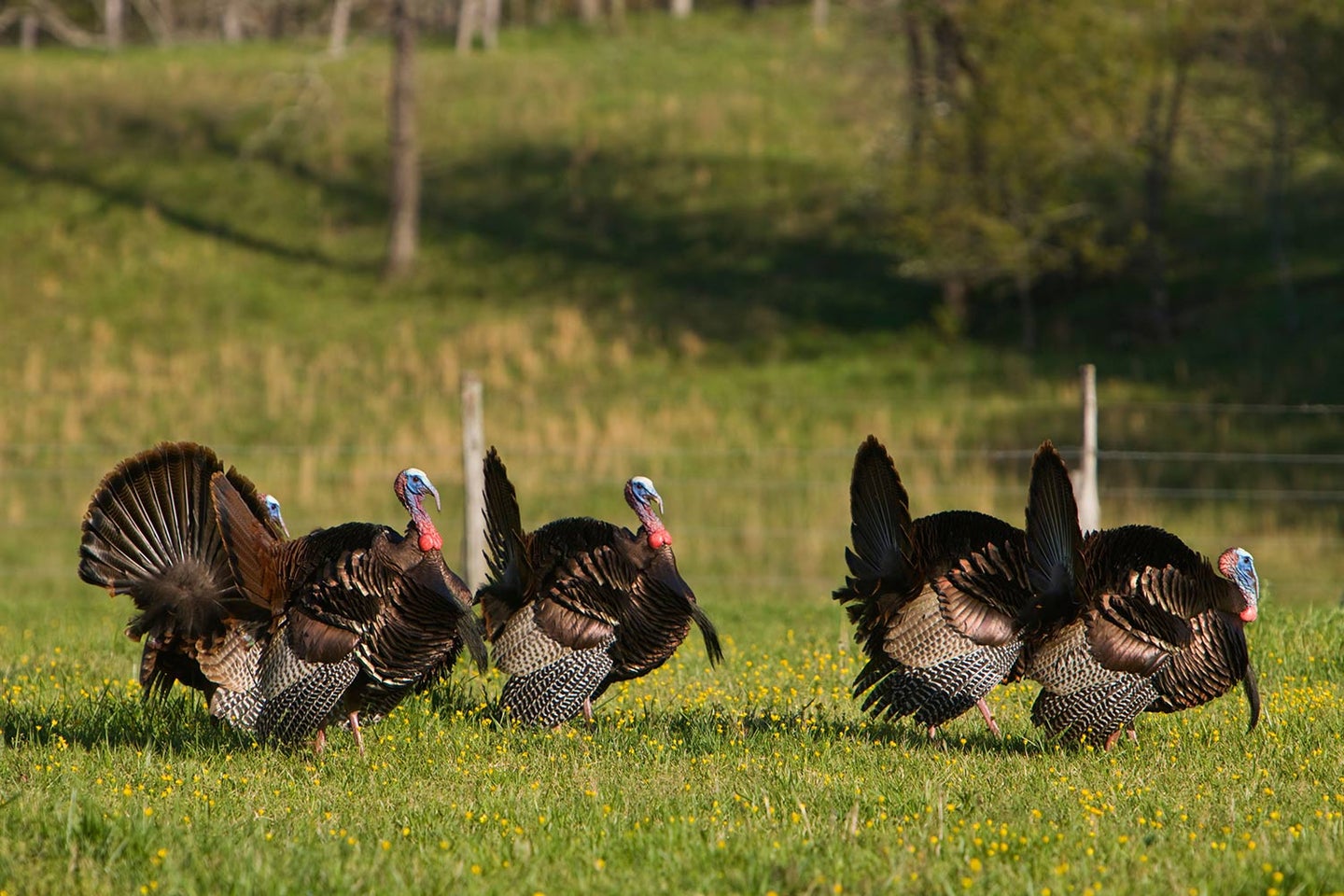 You don’t have to do any preseason scouting to kill a turkey. Strike a hot gobbler on the opener, and you can be slinging that tom over your shoulder in a matter of minutes. But for every gobbler that comes running to the call, there are a dozen that plant their feet, ignore your yelps, and do whatever enters that walnut-sized brain of theirs in the course of a day. Killing those birds—the vast majority—usually boils down to your knowledge of flock dynamics and how turkeys use a given property when they’re not running to the first yelps they hear. In short, it comes down to scouting.

Even if your spring opener is still a month or more away, it’s not too early to start glassing flocks, finding sign, and studying individual toms. Besides, after a long winter, you should be aching to lace up your boots and get in the woods. Here’s a six-step scouting plan that starts now and takes you right up to opening day.

Turkeys bunched up where you live? That’s fine—it’s what turkeys do to survive the lean times of late winter and early spring. While flocks will disperse and become more evenly distributed on the landscape in the weeks ahead, now is the perfect time to get a handle on bird numbers on your property. If your terrain is open enough that you can observe turkeys from a distance, drive around and glass flocks to determine the number or longbeards and jakes around, as well as the approximate gobbler-to-hen ratio. This can be important information as you decide how to handle individual birds in the weeks ahead. Gobblers that have to compete with lots of other toms, for example, may be more aggressive and easier to a decoy, while those dealing with low hen numbers can be easier to call in.

Trail cameras aren’t just for deer. Properly placed units can reveal when and where birds hang out in general, as well as where individual toms are most active. Turkeys are often highly predictable, especially at or near their favorite roosting and feeding sites. Gobblers will patiently wait in a strutting area where they’ve had success, and cameras can help you nail down those spots.

But it’s usually best to use your cams differently than you would for deer. Instead of the usual settings, take advantage of your camera’s Time Lapse or Field Scan mode. Field Scan simply takes pictures at a predetermined interval (which you can set). Game doesn’t have to be close enough to trigger the camera, and that means you can watch an entire field or part of a field. If you get pics of birds feeding 200 yards away, let’s say, and you see that the birds are repeating that behavior over multiple days, then you can then move your camera closer to their path and refine your intel. Most Field Scan modes allow you to limit when the cam shoots pics, so set the unit up to shoot only during daylight, or only during the first and last few hours of day at a roost site, and you’ll save on battery life and card-storage space.

Spring turkey hunters often get so focused on breeding activity that we forget that our quarry’s belly—not their libido—governs the vast majority of their movement. Sure, gobblers don’t care much about eating now, but the hens they’re after are much more practical. If the food isn’t present, they’re simply not going to waste time in that area. In short, if you can find the hens’ food, the gobblers won’t be far off.

The problem here is that turkeys eat just about anything. So don’t worry about tracking their favorite food of the moment. Instead, focus on major food sources as a starting point, and look for other snacking foods in the general area. I usually stick to three main categories: mast, waste grain, and green fields. Mast is always a safe bet, and while the nut drop from last fall seems far in the rearview, turkeys are experts at cleaning up any remaining acorns, and to a lesser extent hickory and beech nuts. Waste grain in any farm field is a huge draw for early-spring turkeys, especially if those fields have been covered in deep snow all winter. The season’s first green fields—alfalfa, clover, winter wheat—are also reliable magnets, which often offer a bonus meal of the spring’s first insects. Again, if your terrain is open enough to allow glassing sessions, finding and keeping up with major turkey dining spots can be relatively easy. If your ground is more wooded, you just need to do enough walking to find the telltale v-scratches left by feeding birds. If there’s still snow on the ground, scads of tracks will tell you where the birds are filling up.

Once the season starts, how any one gobbler reacts to your calls or decoys will depend largely on where the bird falls in the pecking order of local toms. It’s a huge advantage to get a handle on this before formulating a hunt plan. Although the breeding season might be weeks away, gobbler groups are establishing a preseason pecking order that could remain through late May. Your ability to identify and respond to that dominance hierarchy starts right now.

Many flocks have a “boss bird” that rarely gets challenged. Watch the behavior of early-spring flocks to identify the bird that struts no matter the situation, or the one that other toms seem to defer to. This is a bird you can call aggressively to or use a strutter deke to lure into range later. Another factor to consider are so-called “buddy birds”—two to four toms or jakes of similar age and size who always seem to run together. These bachelor groups can intimidate even the most badass tom on the block, and your ability to identify these bad boys now can affect how you work them in the future. There are also gobblers, sometimes really big ones, that are timid and just don’t like to fight. If it’s possible to identify this turkey by a physical quirk, distinctive gobble, or favorite location, do so, as you’ll want to finesse this bird instead of challenge him.

Nailing down favored roosting sites is often the easiest part of scouting, since it involves nothing more than listening for a few minutes at dawn and/or dusk. Sure, roosting spots will change some as the spring progresses and flocks disperse, but keeping up with these transitions is a pretty simple task. In the process, you’ll likely learn some general tendencies that can help you predict favored sleeping spots as the spring unfolds.

Tree species is one preference that can be vital, especially if you’re hunting a new area. Eastern turkeys near my home adore mature red oaks, while Merriam’s I’ve hunted are attached to towering pines, and the Rios I chase seem to select huge cottonwoods. Also keep in mind that no matter the species—bird or tree—roosting turkeys usually have an open area nearby that they can pitch down to; this insures that they won’t land in a spot where predators lurk. In hilly terrain, I’ve found that birds prefer to roost on a south- or east-facing slope; this allows them to wake up to the sun’s first warming rays, an important consideration in the often-cold temps of early spring.

In the weeks leading up to the season, I make a milk run to listen to gobbling activity on several known or suspected roost sites, listening for the location and number of birds. If work or sleeping in prevents me from these sessions, I can always quickly speed-scout the likely roosting areas at midday. Feathers and fresh dropping reveal an active roost. Because Eastern turkeys tend to be less faithful to specific roosting trees, their sign is often spread over a general area. With other subspecies, you may find piles of poop beneath their favorite sleeping limb.

Your scouting work will be vital to devising a good strategy for the opener, and when it comes to turkeys there’s no such thing as TMI. As the season approaches, examine what you’ve learned about where hens are feeding, where birds roost in which conditions, and how gobbler groups are behaving. Then, check the weather for the opener. Your scouting should have revealed how temperature, precipitation, wind, and other factors influence where turkey roost, feed, strut, and travel.

By the time the alarm rings on that first morning, I’ve usually worked up a four-step game plan for the day, based on my scouting info. I start at favored roost area, especially if I can tuck a bird to bed on a milk run the night before. If the roost hunt blows up, within an hour I’m moving to a favorite morning food source and will work that oak flat or farm field until late morning. Assuming I haven’t tagged out there, I spend midday at a favored strutting/loafing spot for gobblers on that property. Finally, after a break, I’m back near a good roost site in the evening (where legal). I go into each spot with confidence, because I know that the best place to kill a gobbler is where the bird wants to be—and because my scouting has shown me exactly where that is.