There are three stages to any bean field. Master hunting in each one, and you’ll drop a monster 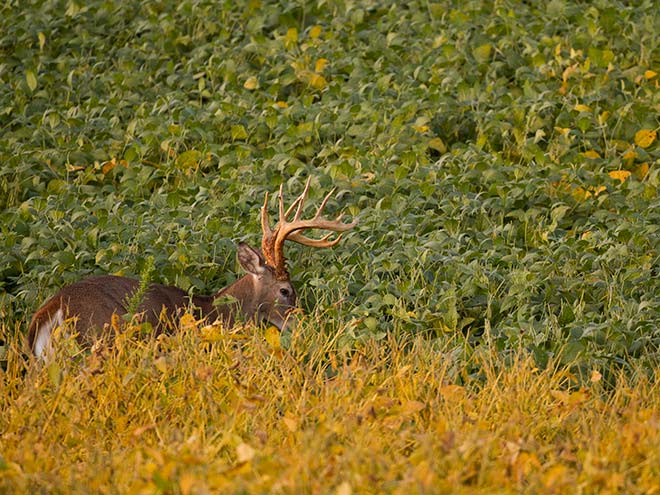 A shooter whitetail chows down in an early-fall soybean field. Lance Krueger
SHARE

Soybeans are a favorite of farm-country whitetails from midsummer until the combines appear. Indeed, if I had to name one solid and consistently attractive big-buck crop, I’d pick soybeans over just about any other.

But early fall is an important transition time for the annual bean crop, and your whitetail hunting strategies have to change as the plant matures.

Here’s how to identify three major changes in a soybean field and how to adapt your hunting tactics during each stage of growth.

Stage One: When Soybeans are Still Green

What’s happening: Early-fall beans are often summer-green and attractive to deer. Unless acorns are dropping in the woods, expect deer to hit soybeans consistently.

Your move: If your beanfield is big, whitetails can enter from many trails, almost anywhere. In order to narrow down the preferred routes and feeding areas of bucks, spend several evenings glassing before setting a stand or blind. If you don’t have scouting time, place trail cams along several trails to identify the hottest routes. This pre-hunt intel is critical because you won’t get away with many wrong guesses—busting feeding deer off a field as you exit almost guarantees nocturnal visits in the aftermath. Nail down a preferred entry trail, and you could go one-and-done on a dandy.

What’s happening: As bean plants mature, they start to yellow. The leaves are no longer as tasty and the pods aren’t yet ripe, lowering their attractiveness to deer. But here’s the thing: Bean plants don’t mature consistently across a field. Some plants will remain green and tasty, often many days after their neighbors have gone yellow.

Your move: Many hunters ignore a yellowing beanfield, but that could mean missing out on a good deer. Scout the patches of green—often those growing near a woodline or in a low-lying area—in a sea of yellow and you’ll invariably find tracks, droppings, and feeding sign. Move your stand setups to these preferred feeding areas, and you’ll enjoy action at a time when many hunters have given up on beans.

What’s happening: Fully mature bean plants look surprisingly different from their summertime peak appearance. The once green, bushy, and lush plants have become slim brown stalks with withered leaves. But the pods are crammed with mature beans that whitetails adore, and they crave them for as long as they can get them.

Your move: The good news is that deer are back to beanfields big-time. The bad? The clock is usually ticking, and fast. Unless you’re hunting a food plot, your farmer is probably chomping at the bit for harvest, so get those scouting boots on in a hurry. As most of the easy beans (at the woods’ edge) will already have been consumed, deer will focus on stuff farther out in the field, making your knowledge of entry trails especially important. Fortunately, buck sign is increasing by the day, so scout entry trails to find field-edge scrapes and/or rubs. If there are no good stand trees or blind setups at these points, set up as close as possible nearby, then use a buck decoy to lure your trophy to your position.