How to Sneak Up on a Bedded Buck

With the right conditions, you can sneak along a ridge end, peer over the top, and catch your next buck off guard 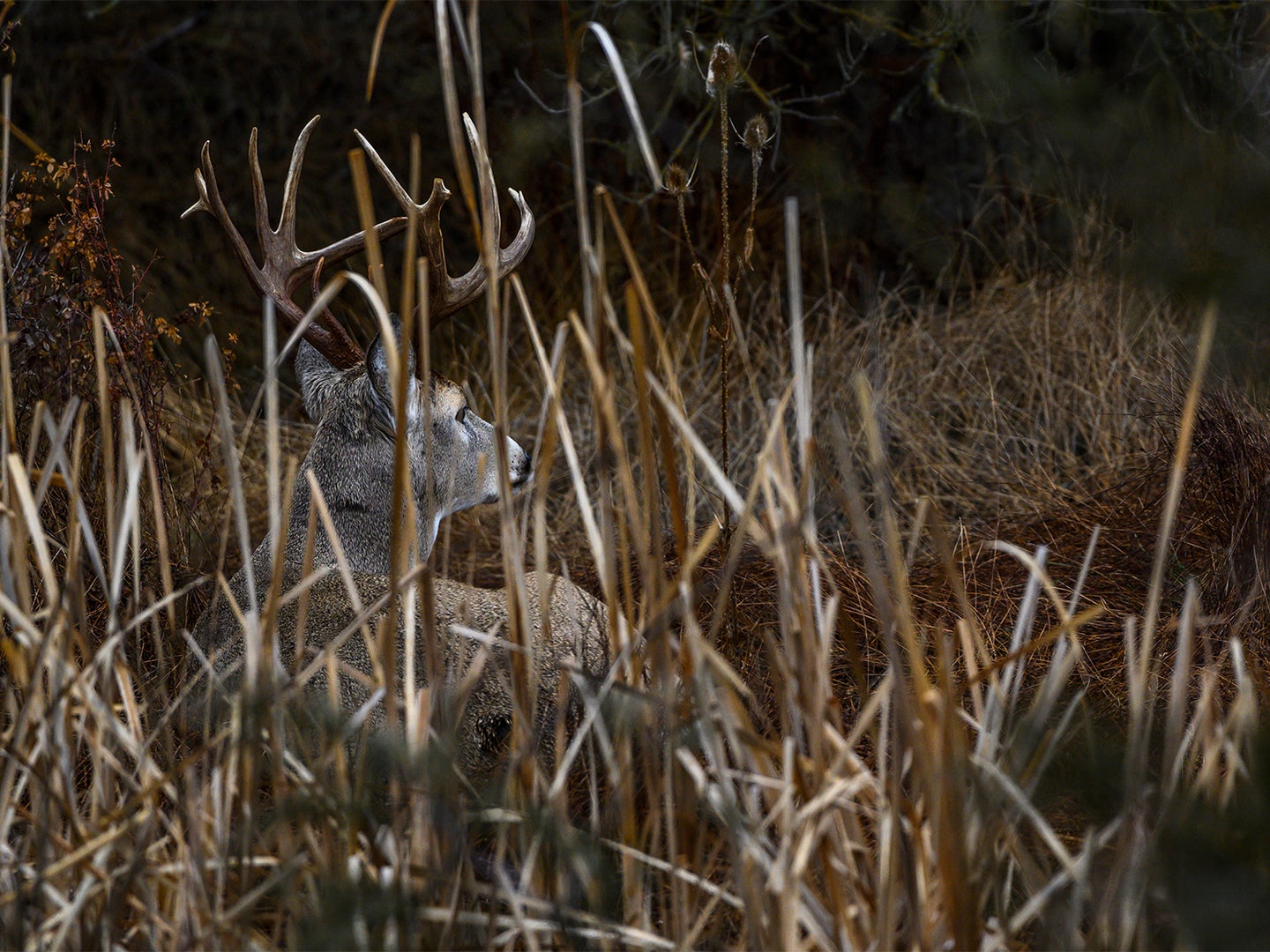 A nice whitetail buck bedded down for the day. John Hafner Photography
SHARE

I wasn’t even going to hunt yesterday morning. For one, it was supposed to pour. For two, it can be a little tough to get excited about four more hours in a treestand at this point in the season. But when I woke up an hour after first light, I saw that the driving rain had softened to a shower. It occurred to me that my footfalls would be quiet in the soaked duff, and that one of the two vampire bucks I’d been after was probably bedded under the hemlocks already, just down from the ridge end. And wouldn’t it be something to slip up on that bugger and shoot him in his bed?

I wouldn’t call it a high-odds gambit, but if you’re dealing with a buck, or bucks, that never seem to want to get off their stomachs during shooting light, and if you’d rather not stage a drive and risk blowing them off the property, this is a comparatively low-impact tactic that can really work if the conditions are right. It’s also fun. And when it works, you get to tell anyone who’ll listen that you snuck up on and shot a bedded buck.

There are plenty of buck bedding areas—thick, nasty places—where you’re not likely to take a whitetail by surprise. (Actually, I do know a Maine Guide who can sneak crazy close to bucks holed up in dog-hair alder thickets or cedar swamps. But he’s in another league from us mortals.) Still, there is one place where bucks love to bed that is also just about tailor-made for sneaking: ridge ends.

Whether it’s where a main ridge peters out before falling steeply downhill or where a finger ridge or spur does the same, these are reliable bedding areas. Ridge ends typically come to a point of sorts, and that’s where bucks like to lie down, usually a little below the ridge’s crest, facing the downhill slope and with the wind at their backs. This way they can see danger out front, smell it from behind, and if they have to bolt, they have options: They can go up, down, or curl around to the hidden side of the ridge.

But these places have advantages for you, too. Unlike a lot of other bedding areas, ridge ends are specific, defined spots. A buck bedded in a cutover or a swamp or CRP field might be anywhere, but one bedded on a ridge end is one you can sneak up on. The topography also helps keep you hidden as you go, and the cover is usually open enough for a clear shot.

Ridge ends are such reliable buck bedding areas that serious deer hunters in hilly country often keep a mental catalog of the ones on their property, and they know which are most likely to hold deer. You can probably think of a few right now. So, remember them for when you want to make an aggressive move on a buck that’s driving you crazy.

Wait for the Right Weather

Through much of the season, it’s best to leave these spots alone and ambush deer moving to and fro. But when the weather is right, you can inch along a ridge end, peer over the crest, and catch a buck staring in the wrong direction.

What you want is a combination of precipitation and wind. Rain is good. The wet ground combined with the sound of falling droplets makes for perfect sneaking conditions. A shower or drizzle is fine, but a steady rain is even better if you’re willing to hunt in it. The best is freezing rain or sleet, as it’s even noisier than rain and you don’t get as wet. Not all snow is quiet to walk on, but when it is quiet, and especially when it’s blowing, you’ll not only have good sneaking conditions, but you may have fresh buck tracks to follow as well.

Finally, you want a fairly strong breeze that rustles late-clinging leaves and makes the branches sway, to help hide the sound and movement of your approach. And it should be a steady wind, in terms of direction, to keep your scent from blowing toward the buck’s nose.

How to Sneak Close to a Ridge-End Buck

Wind direction is critical for this tactic because, ideally, you want to hunt a breeze that’s wrong enough to make the buck feel safe, but right enough that you won’t get busted. Suppose the ridge end in question points straight north. A buck might bed off that point with a variety of winds, but he is most likely to do so if the wind is at his back, in a southerly direction. Now, more often than not, a southerly wind has a little west or east in it—and that’s what you’re after.

If it’s SW in this case, you’ll want to favor the west side of the ridge as you sneak, to keep your wind from the deer bedded off the point. Even when the wind is straight south, you can often sneak far enough to the left or right of the point that you’ll be okay and still be close enough for a shot. But it’s better to have a slightly quartering wind.

Just as important is how you sneak. This tactic isn’t going to work for you if you can’t go slow. And I mean s-l-o-w. It’s actually best to think of this method as hunting in one place, except that every 3 to 5 minutes, you move that place a foot closer to the ridge end. This way, you’re not only super-quiet, but you’re mostly still, too, which is key because it’s not only bucks that like to bed on ridge ends. Does do, too, and that means bucks will swing around these points, cruising for does, as well as choosing a place to bed.

So, while you’re hoping that a buck is bedded off the point, the fact is, one might show up at any moment. The last buck I killed by sneaking on a ridge end appeared out of nowhere. I was peering over the point, looking for a bedded buck, when I caught a little movement to my left—and there he was, standing in a slanted curtain of sleet, 8 yards away, staring at me. He ran off, but made the mistake of stopping and looking back at around 60 yards.

As you sneak, stay just down from the ridge’s spine on one side, so you’re hidden from the top but can peer up there every so often to glass. Take only a step or two every few minutes, and plan on the hunt taking you an hour or more. When you get near the point, resist the urge to pick up the pace, even though if the buck is there, he’s most likely close—just down the hill a bit. Get low, on your hands and knees if there’s not much cover, and peer over. If you’re lucky, you’ll see the back of a rack. Or a buck just standing up from his bed.

If you don’t, you can put your back against a tree and wait, as a buck may well show up soon. Or you can make a day out of sneaking ridge ends, hopping from one suspected buck bedding area to another.

I didn’t see the back of a rack as I peered over the ridge end I hunted the other day. I glassed left and right, because bucks don’t always bed right off the point, of course. I looked half way down the slope too, because sometimes there are benches farther down where a buck will rest. Eventually, I resigned myself to the fact that he wasn’t there and settled in to wait a while. A couple of squirrels were going bonkers, and I watched one chase the other clear down to the bottom of the hill, where I thought I saw something else. I lifted my binocular—and there was my buck’s 10-point rack, facing away, his long body lying on the soggy duff. It would have been an easy shot. He had no idea I was there. The little shelf he chose, beneath an awning of hemlock branches, was maybe 100 yards away. And about 20 yards onto the neighbor’s property.

I called to him. I bleated and grunted and eventually snort-wheezed, but he wouldn’t come. Oh well, I figured, I know where he lives. Maybe I’ll catch him from my climbing stand, coming off that ridge end to feed or returning to bed. Or I’ll get another rainy or snowy day, with the right wind, and he’ll be bedded in his usual spot, higher on the slope, just off that ridge end.