A hunter kills a deer from her favorite treestand 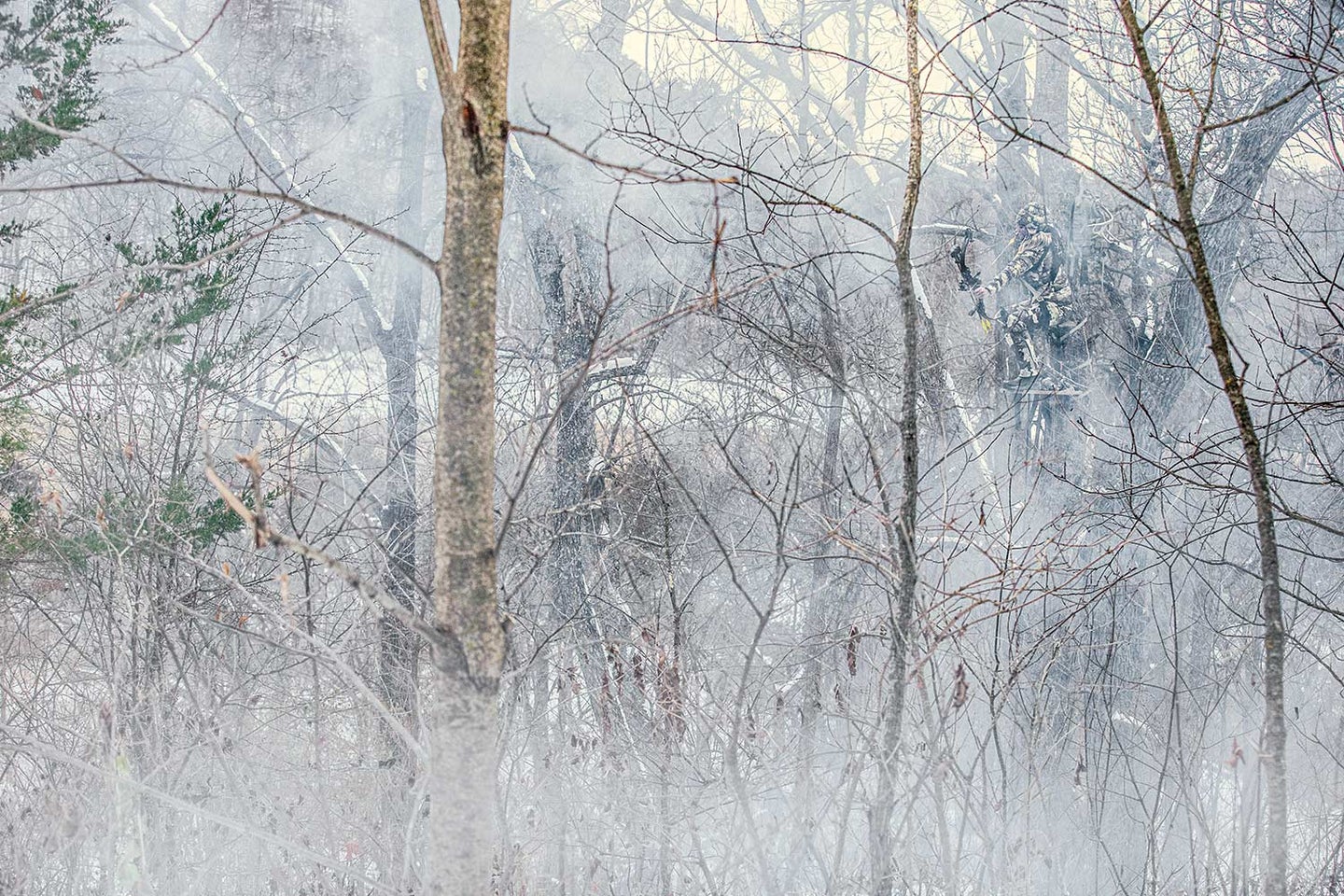 When temperatures drop and the conditions are right, the best place to hunt is from your favorite treestand. Tom Martineau/The Raw Spirit
SHARE

When I finally reach my treestand on the closing day of rifle season, it looks just as I remember it. The camo cushions have faded in the last few years, and the extra-tall ­ladder is dinged in places, but otherwise it’s in fine shape.

The stand faces a narrow field with alternating strips of food plots and cover, the northern border of the family farm just beyond. To the south, there’s an ever-expanding beaver pond; to the west, a creek and a steep hill. A dense stand of cedars grows to the east. Deer are drawn to this place, and so am I.

I hitch my rifle over my shoulder, close one hand around a cold metal rung, and begin to climb.

The last time I saw a good buck here was in 2013, when Indiana was still a shotgun-only state. That was also the final day of gun season. Conditions were perfect for my stand, so that’s where I went. In my hurry to get there, though, I loaded only one shell. I’d load the others later.

Thick frost glittered in the sunshine, but everything else was still. I watched the creek until, about an hour after daybreak, a noise turned my head. Fifty yards in front of me stood a buck. He was big—the biggest I’ve ever seen on the farm—and he was broadside. A turnip poked out of his mouth, and I could hear the root crunching between his teeth. He looked worn from the rut and dazed, like a midnight snacker chewing with his mouth open in front of the fridge.

I shifted. The seat didn’t betray me with a creak, and neither did the railing as I eased the shotgun onto its padding. I was shaking badly, but the deer didn’t seem to be going anywhere. So I just sat there, collecting myself and looking everywhere but at his antlers. He was standing placidly, perfectly, his jaw still working when I yanked the trigger.

Only when the buck ran did I remember the single slug I’d loaded. I knew I’d hit him, but I didn’t see a gaping hole—just a raw patch under his brisket, and suddenly my numb fingers were clawing another slug out of my pocket. It slipped through them and down to the duff below with a soft thwomp as the buck paused, quartering away. I fumbled for another and dropped this one into the 1100.

At the sound of the receiver slamming shut, the buck tore off again. He crossed the creek, surged up the hill, and disappeared. I sat up there for an hour, alone in the field except for my loaded gun and a single, incessant thought: Idiot.

When I got down to look for blood, the trail dried up as suddenly as it began. Only the smallest drops were visible, a few specks on the creek-bed rocks.

I retired my shotgun and borrowed another to shoot a trio of meat does on a friend’s farm during the antlerless season. But I was a guest, and the homemade hide he pointed me toward looked more like a condemned treehouse than a tree­stand. I had to wait a whole year to slip into my own stand again and drop a doe. Sitting there, I felt as if my botched hunt had been, if not forgotten or forgiven, eased somehow.

Then three seasons passed where I didn’t make it back to the farm. By the time I returned in late 2018, Indiana had opened a rifle season, and Dad had put up half a dozen new stands. He even installed a fancy box blind behind the beaver pond. It’s snug against the elements, a ploy to keep my grandpa hunting into his 90s. What he needs from it—comfort, shelter, security—is exactly what I hate about it.

The wind has been wrong all week, and staying away from my tree for even a few more days is a test in patience. I hunt up the hill instead, then in the new blind, feeling cut off from the woods around me and imagining what I might see from my tree, one field over. Just as I resign myself to another season without finding out, the wind changes.

I can feel the promise in the cold afternoon as I climb. I’m pleased to be hunting with family nearby, happy to be sitting alone. The stand hasn’t been hunted all season—my dad rested it for months, knowing I would finally be home for the holidays.

The old sugar maple’s remaining leaves whip in the 30 mph gusts as I settle against its bark. The trunk leans back like an armchair, though not far enough to tempt sleep. On windy days, the tree sways slowly from side to side. It’s not precarious so much as a reminder that the maple is alive.

Today’s wind is in my face, just as it should be. I’m so relieved it’s finally howling in the right direction that I don’t even mind how it makes my eyes water. I’ve barely blinked the tears away when the noisy geese that live in the beaver pond circle the field. As they splash down, a great blue heron takes off for the nearby river, flapping over the timber and out of sight. I don’t see the bobcat that likes this spot, but I know she’s hunting here somewhere too. Slow days are rare, and today isn’t one of them.

An hour before dark, a young buck, a doe, and her twins wander into the winter wheat, one by one. Eventually, they all spook and slip back into the cedars. Then, in that window before dark when anything can happen, another deer steps out.

He’s so careless that, for a moment, I think he’s the young buck again. But the impression is immediately replaced by another: This deer is big. Not his antlers, but his belly and bristling neck, and the stout shoulders between. He is confident, and so am I.

I don’t hear the rifle even as I watch the buck fold. But my dad and grandpa do, despite failing ears and the insulation of the box blind. Once it’s dark, they will descend the stairs and drive over to find me beside my buck, grinning stupidly. We’ll haul him up the hill and behind the old farmhouse, and I’ll gut him while the neighbor gawks. Then we’ll drive four hours back to my parents’ place in the suburbs. I’ll butcher him on the tailgate, garage doors closed against the bitter cold, while Dad excitedly ages the jaw (4½ years old) and tapes the rack (116 inches). By 2 a.m., the quarters will be wedged inside the fridge, and I will collapse into bed for a few hours, then catch an early plane.

But before all that, I just sit. I let the adrenaline wash over me, and I look at my buck until the shadows swallow him. I watch the pink sky sink into the cedars and listen to the wind sweep the creek, tossing branches until it reaches the maple, then my face. I close my eyes and lean, shaking, against the trunk.