Notes from Deer Camp: Hunting Whitetails in the Adirondacks 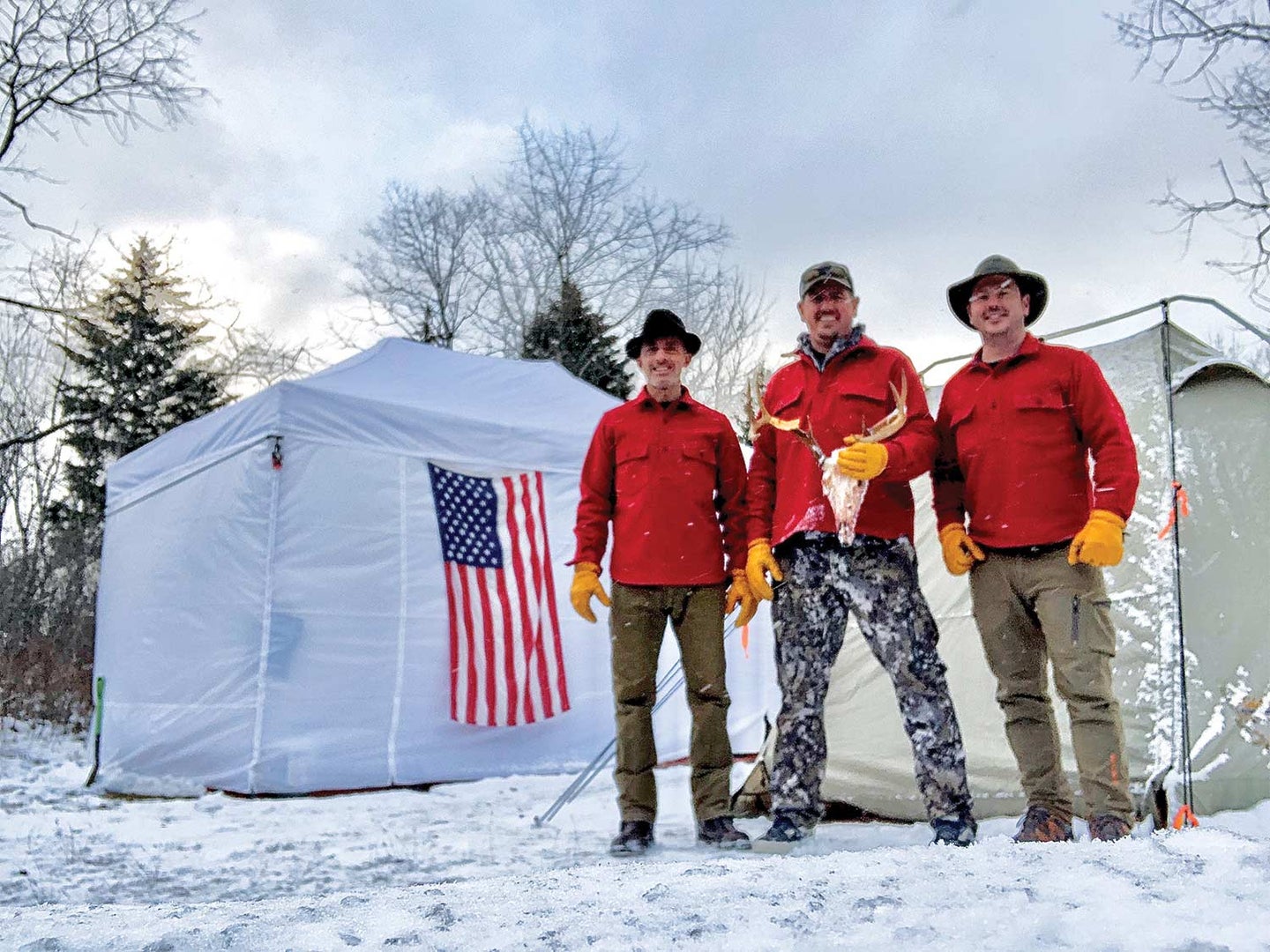 2017, Day 4: I had just sat down on a dry, flat rock to rest and take some notes when I heard a gunshot. These woods were brand-new to me, so I couldn’t tell for sure, but it seemed as though the sound had come from where Greg was hunting. This was our last day of hunting—and the first without rain. It was getting late in the afternoon, and I knew that if I had any chance at filling my buck tag, I should stay put. Instead, I followed my gut and left to see if my friend needed help.

I waited by the trailhead, hoping to see Greg at any moment with a grin on his face and asking for another body to help drag his buck out of the woods. Eventually, he did show, and he was smiling, but not because he’d filled his tag—just because he’d had a good day in the woods.

We left a note on the vehicle letting Nate and Anthony know that we’d decided to head back to camp on foot. The walk was mostly quiet as we scanned the woods for signs of life, but there was a moment when Greg broke the ­silence, not with a question or an observation or a joke—but with an invitation.

“Would you come back next year?”

I was flattered and, in the instant, didn’t know what to say. I had hoped that I would be asked back, but you never know. I’d been invited to be a guest at camps before but never to join one till now.

The other day, I revisited that scene between Greg and me, written in the hunting notebook I took to the Adirondacks back in 2017. That wilderness has been on my mind a lot lately, because in less than a month we’ll be headed back that way for our annual deer camp.

Every November, the four of us leave at first light and drive to Adirondack State Park, in upstate New York. This fall will mark year five overall, year four for me. I missed the inaugural camp, but it still feels like I’ve been coming here, with my friends, for ages. Traditions can be funny that way: Follow them long enough and they feel as though they’ve always been a part of your life.

I write in a journal every day, but I tend to be even more obsessive about the practice during my hunting and fishing travels. Year by year, day by day, I record just about every detail—weather enjoyed/endured; caliber/fly used; meals cooked/eaten; tags punched/eaten—so it can be a real trip to read through these entries every now and then. Not all of the notes I jotted down from the 2017 camp are as pleasant as the one between Greg and me.

It was a rough and demanding hunt—one that I didn’t mind putting behind me at the time. But in the weeks and months that followed after we came home, I began to think of the Adirondacks in a new way. Those woods are so remote, so still, and you spend so much time alone in them with just your thoughts, day after day, that you can’t wait to get back to camp and reunite with your friends to hear the stories of their hunts, and to share yours. And the pleasure and camaraderie of those nights at camp, feasting and drinking and bullshitting with your pals—what makes them memorable is a consequence of all the time you spent in the woods, alone.

I wouldn’t know where to begin finding this entry in the stacks of completed notebooks I have at home, but somewhere in those pages, I know this one is there:

2018, Day 5: Most ADK hunters don’t bother coming here till there’s snow on the ground, which essentially shrinks the park by making it easier to cut a deer track and follow it until it ends in a punched tag. Year after year, we hope for snow, but the only precipitation we’ve gotten was rain—until today.

True to our luck, though, the day started with rain. Biblical rain. Rain so hard it makes you question what the hell you’re doing out here. After a while, I’d had enough, so I hunkered beneath the overhang of a glacial boulder to ride out the storm. As I waited, sipping my coffee and eating my breakfast burrito, I could feel the temperature plunge. I noted the almost magically instant moment when the hard-pounding rain morphed into a silent snowfall. In less than an hour, the flakes had blanketed the ground—so I stood up and began to hunt, finally, like an ADK hunter.

I moved quietly but quickly, with my head down. Eventually, I cut a track. The prints belonged to a doe, but I followed them anyway, hoping they might lead to a surprise—and because this was the most confidence-boosting hunting I’d ever done here.

The temperature drop, unfortunately, didn’t last long, and the tracks eventually vanished, melting into the earth before I could see them to the end. The stalk took me deep into the wilderness—off course from where I’d envisioned going. I pinned my location on the GPS, then checked my watch. At best, I had a couple of hours of shooting light left, so I began to hunt my way back to the trail before I’d head back to camp.

Looking back, I have a lot of journal entries about nights at camp, noting how my favorite evenings are the ones when I’m not the first to arrive after a day’s hunt. There’s something about returning to the sight of a distant, ­lantern-lit tent in the woods that makes you feel like you’re going home. Then, the closer you get, you see the smoke curling from the stovepipe; closer still, and you hear your friends’ laughter and voices—ones that will greet your arrival and ask about your hunt.

Also, notes and notes and notes about our dinners, which we take seriously. Cassoulet and paella are two of Greg’s specialties. Anthony has served spiedies and whitetail chili. One of these years, we’ll feast on the wild-caught fluke Nate promises. I’m always tapped for a smash-burger night. After dinner, we take a nightcap into the tent and commence what is probably my favorite tradition of camp. Greg unrolls the giant topo map and sets it on the floor, and we all sit around it as if it were a campfire. Then, one by one, we take turns tracing and narrating the miles we covered during our hunts.

I have my own copy of that map at home, and I’ve laid it out on my bed a few times in the last couple of weeks to start thinking about where I might hunt this fall. I’ve been amazed by how easy it is to let the map deceive you; how even after years of getting no closer to a buck in the Adirondacks than seeing his sign, you can let your eyes relax on the contour lines until they lead you to a bench or saddle or swamp—to a place where you know, you just know, you’ll find a shooter.

2019, Day 1: Camp got off to a different start this year. For one, Anthony had recently moved out West with his family, so it was just Greg, Nate, and me. Camp took a bit longer than usual to set up, but we managed. But it wasn’t just the smaller presence in camp that felt different. For the first time ever, instead of setting up in the rain, we pitched our home in the woods as it began to snow in the Adirondacks.

I tried not to get my hopes too high, but I couldn’t help but take the change in weather as a good omen.

My notebooks from the Adirondacks keep piling up, because camp keeps getting longer. In years one and two, we could only budget for three days of hunting. Year three, we extended it to four, and last year we scheduled five. Our reasons for this unofficial tradition of extending camp by a day are both practical and selfish.

2019, Day 2: Nate and I hit the trail together, while Greg struck off to another patch of the woods. Nate went to hunt his usual spot, but I kept going, following the trail farther than I ever had. There was still some snow on the ground from the night before, but not enough for good tracking conditions, and I didn’t see much buck sign—still, it was a beautiful morning.

I found a rock overlooking a lake where I sat to finish my breakfast burrito and coffee, and it was around then that I heard a gunshot. I couldn’t really tell where it came from, and given the lack of luck at our camp over the years, I just assumed it couldn’t have been from Nate or Greg.

Before I got up, I checked the map and found a saddle that led to another lake that I wanted to explore. I was maybe halfway there when I got a message from Greg: “Nate got one. I’m on my way to help.” So was I.

No, it set in after the last hunk of meat had been placed in a gamebag and dropped into a backpack, and the three of us began to hike out of the woods together. Nate killed the deer, but we all shared the load. We had plenty of daylight, so we took our time until we reached the trail. Then we turned home toward camp.

We’ve been sharing an office together for far longer than a deer camp and, in a normal year, in the weeks leading up to camp, we’d hash out any last-minute details at work. But 2020 has been anything but normal. The morning we leave for the Adirondacks this fall will be the first time we’ve been together since March.

This has mostly gone unspoken but, from one November to the next, I think we’ve always counted ourselves luckier and luckier that we’ve gotten to stay colleagues and friends. We know that may not always be the case. At some point, we’ll probably have to go our separate ways, whether we like it or not.

2019, Day 7: Greg and I always travel to and from camp together, and on the drive home, not long after we’d exited the park, there was an extended silence that he interrupted, not with a question or an observation or a joke—but with a pact.

“We have to keep this tradition going,” he said, turning to me before going back to the road. “No matter what.”