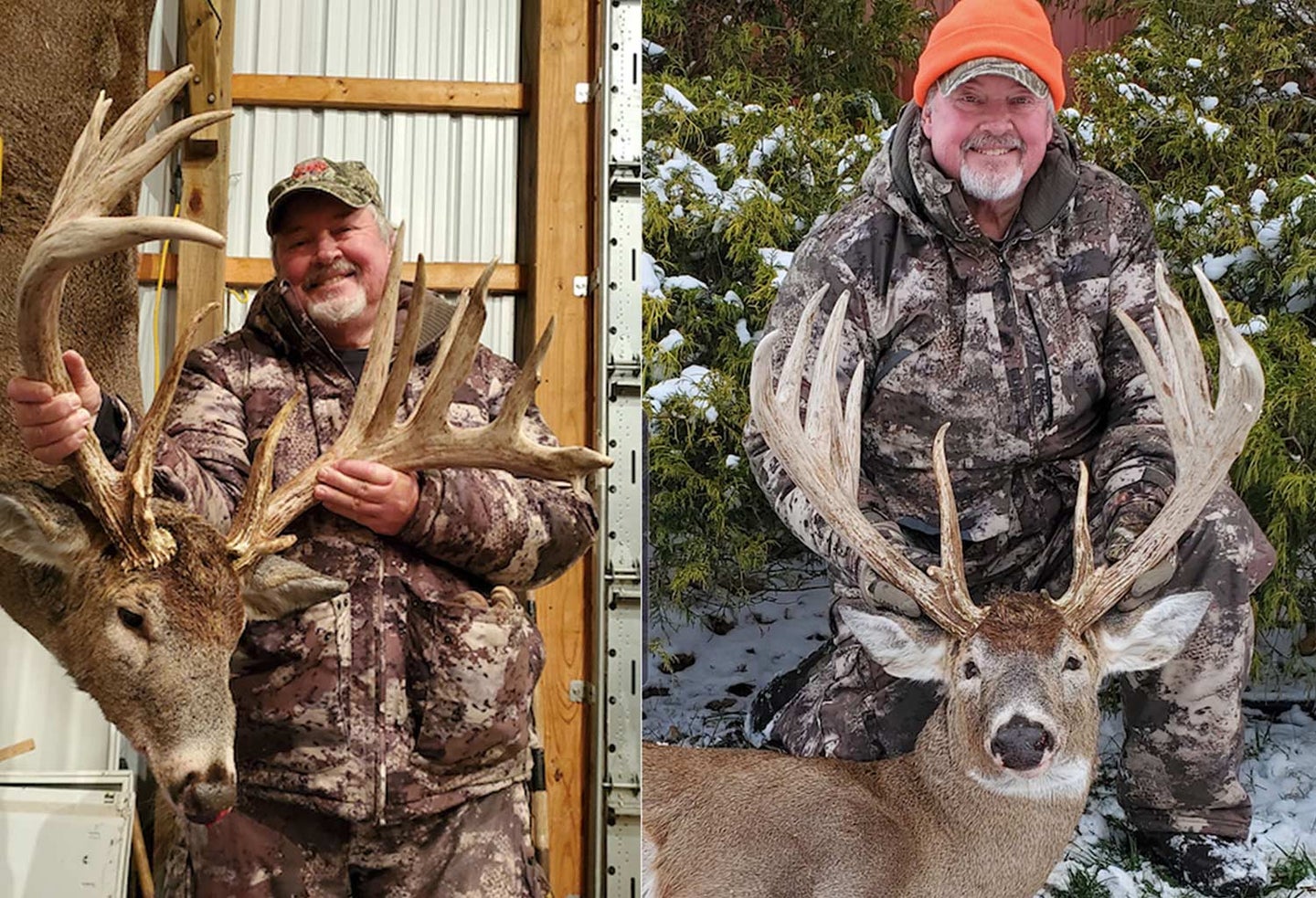 Indiana hunter Randy Hunter was well aware of a whopper non-typical whitetail buck hanging out in his neighborhood. He just didn’t believe he had much of a chance to tag the huge deer. What he needed was a stroke of luck, and on December 16th, it came—in the form of a manure spreader. Here is his story.

Hunter and his son Cody knew the local-legend buck as “Ivory,” and they even had a few trail-cam pictures of the white-racked giant. But the buck’s core area was not on their property. So, they had to hope that either the rut or hunger would lure the buck to their hunting ground.

It would take until the late-muzzleloader season for the buck to finally make a mistake. ‘”On December 16, I woke up to about 3 inches of snow that had fallen during the night,” Randy Hunter says. “I’d been waiting for the right wind to hunt a special fence row and now I had it. This fence row is adjacent to an 8-acre woodlot separated by a small cornfield. I’d hunted the spot a couple of times earlier in the season, but I’d only seen does and young bucks.”

Indiana has a one-buck rule, so Randy usually holds out for a big one. “For the last two years, I’d really been wanting to get a crack at Ivory,” he says. “I’d never seen him in person, despite logging many hours on stand, but I always hoped to catch him chasing a doe onto our place, and the fence row is as close as I can get to his core area.”

On this particular afternoon, Randy decided to hunt from the ground. “We have a treestand in this fence row, but I can’t see the north side of the woods where I thought a good buck may come from.” At about 3:15, he drove to the field and was getting his muzzleloader out of the case when he heard a farmer spreading fertilizer in the field next to the fence row. “Perfect timing, I thought. I called my son, Cody, and told him how ‘lucky’ I was!”

After discussing his options, Randy decided to go to the nearby treestand and hunt there until the farmer finished the field, then he’d get down and hunt on the ground farther up the fence row. “Once I got into the stand, I noticed that with the snow on the ground, I could see through the trees along the north side of the woods. It was getting too late to move by the time the farmer finished the field, so I decided to just stay put.”

Randy sat for 45 minutes or so before seeing a lone doe come out of the woods to his southeast and cross onto his hunting property. Then he noticed movement, and a large deer stepped out. “It was snowing, but I could tell it was a shooter. He was following the doe, and he was huge!”

The doe was moving toward Randy’s stand and pulling the buck with her. “I leaned out to see the buck slowly coming, and that’s when it hit me: This is Ivory! It’s the biggest deer I have ever seen in 40 years of hunting, and he’s coming my way!”

As Randy waited, he felt the wind change and saw that the snow was suddenly blowing directly down the fence row toward the doe. “All I could think was, She’s going to bust me, and he’ll be gone.” Randy leaned out again to see where the buck was—and spotted him looking right toward the stand and stomping his foot. “I thought, I’d better get ready in case he steps out so I can get a shot if I have the chance.”

It’s a good thing he was ready, because Ivory stepped out, looked toward the stand again, stomped, and blew twice—just as Randy took the shot. “As the smoke cleared, I could see him running tail-down toward the woods. I had to shoot quick and through an opening in the tree limbs, so I wasn’t sure I’d hit him.” Randy hung up his gun and sat a while trying to process what had just happened.

“I called my son and said. ‘I just shot at Ivory!’ He actually didn’t believe me at first.” The hunters waited an hour and a half before searching, figuring that the snow would make it easy to follow the blood trail even in the dark. “But we didn’t find any blood. Only tracks,” Randy says. “As we searched, I was thinking, I just missed the biggest buck I’ll ever get a chance at.

“I was really feeling sick when my son hollered, “I got him Dad! Get over here!” It took Randy a few minutes to reach his son. “As I got closer, I could see what a magnificent animal he was. We just stood silently and looked at him. We couldn’t believe it—the deer of a lifetime, and I got to enjoy it all with my son!”

“It’s funny how things work out,” Randy says. “If it hadn’t been for the farmer spreading fertilizer, I’d have been hunting on the ground north of the stand, and I would never have even seen Ivory. Maybe I was supposed to get him.”

Ivory will surely be one biggest bucks killed in the Hoosier State for the 2020 season. With 18 scoreable points, main beams over 26 inches, and a gross green score of 225-4/8, it will be one tough buck to top—and yet we probably wouldn’t know about the buck at all if it wasn’t for a manure spreader.