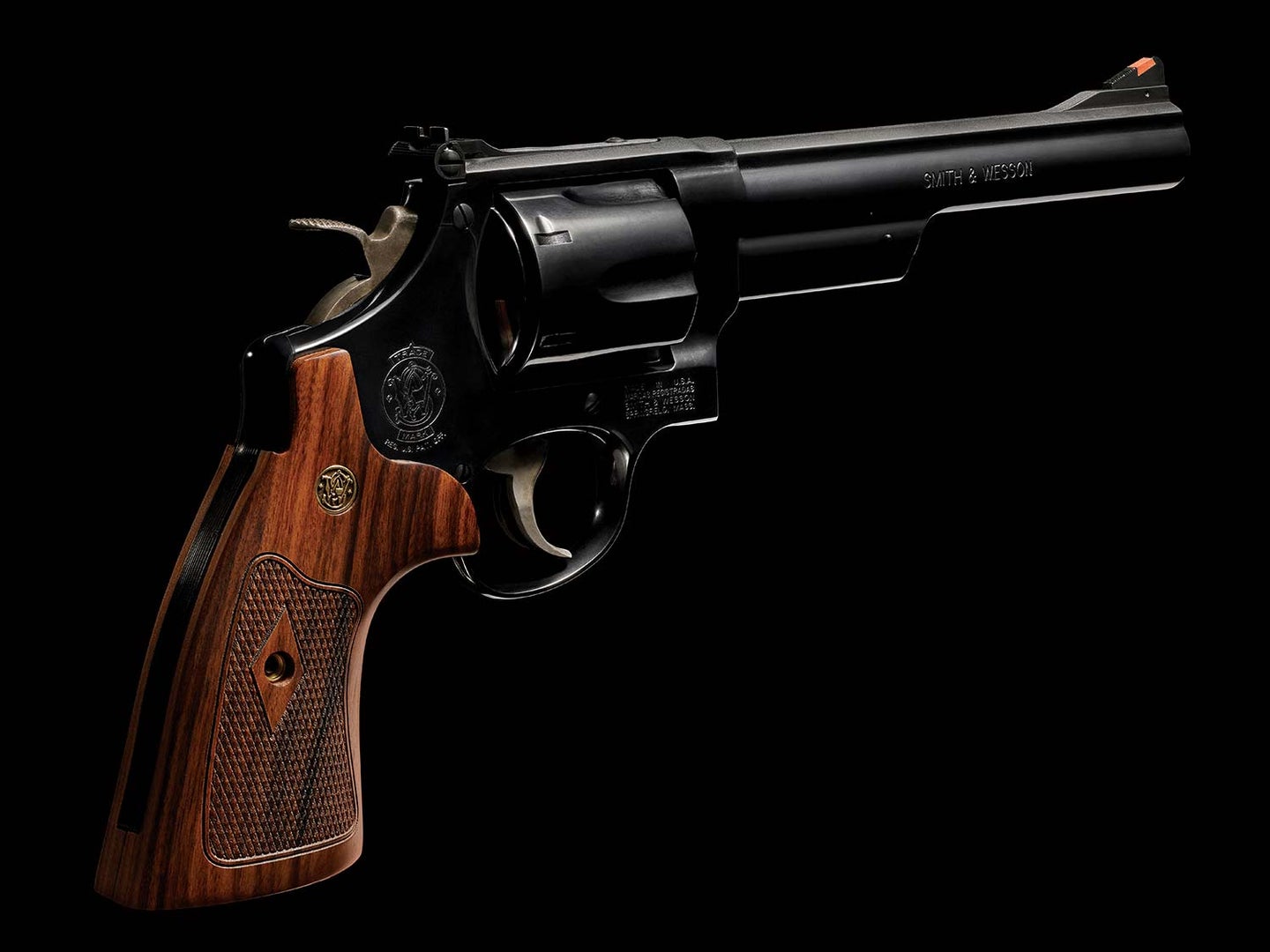 Hit the range now, so you can hunt with a magnum revolver this fall. Nick Cabrera
SHARE

Once upon a time, I stayed in a safari camp on the banks of the Luangwa River, which was home to multitudes of hippos and crocs, who did, in its currents, all the gross stuff that these beasts do. By and by, I asked the PH where we got our drinking water, since a slurp from the Luangwa would obviously kill you dead in a couple of hours. “Right there,” he said, pointing at a big wooden vat. “We pour river water into it, filter it through a couple of feet of clean sand and charcoal, boil what comes out, and you drink it.”

Low tech? You bet. But it worked. Low tech has worked for quite some time. Our departed friends the Neanderthals survived for 400,000 years on low tech, most of those years in a climate that very few of us on Earth have seen. What follows is all about low tech—using what’s at hand, and your wits. Skill may be required. Batteries are not. —David E. Petzal

1. Go Hunting with a Revolver

Handgun hunting used to be trendy. In fact, the trend created a market for 4-pound, ­single-shot “pistols” chambered for necked rifle cartridges and topped with 3×9 scopes, just so rifle hunters could say they were handgun hunters, too. Those guns were fun but not the same as iron-sighted revolvers.

The progression is not all that different from the rise of 100-yard crossbows and 300-yard muzzleloaders. In the case of handguns, though, aside from a few obscure exceptions, there are no special seasons to incentivize you to hunt with them. If you can legally hunt with a handgun, you can probably use a long gun, too. And if the goal is to fill a tag, you grab something with a stock.

I’ve killed a few deer with an open-sighted revolver and a whole bunch of them with a compound bow. If I had to give the nod to one or the other as being more difficult to hunt with, I’d nod, slightly, to the wheelgun. The range limitations and precise shot placement requirements for both are about the same, but the skill required to shoot a handgun is more perishable. So, knowing all that, why would anyone head to the woods with a revolver that’s at its best inside 50 yards when there’s a 6.5 next to it that’s dead-on to 400? Well, for starters, getting close to critters is still fun. Also, just look at how bad-ass this Model 29 looks. It’d be a shame to let it just sit in the safe. —Will Brantley

I’ve killed a mature buck with my bow during five of the past six seasons, and I’ve had a veritable trail-cam photo album of every single one of them. As a tool for getting close to big deer, you can’t overstate the significance of the trail camera. Plus, looking at pictures is fun. I’m not about to yearn for the “good old days” before they filled the woods.

That said, they can cause you to fall into the trap of not going hunting because there’s “nothing on camera.” And that can cost you. That’s why, every now and then, it’s good to be surprised by a buck.

Two years ago, on a cold Thanksgiving morning in Tennessee, I was still-hunting along the edge of a creekbottom. I knew there were a bunch of does in the area, but there was a good bit of buck sign around, too. I had a hunch that slipping around with a rifle would result in something good—and it did.

I walked right up on a big doe, 80 yards away. I sat down and got ready, just in time for an 8-pointer to march into view. I dropped him, and I remember him well, not only because he’s one of my biggest bucks ever, but also because I’d never put a camera in that area. For all that pictures can tell you, just being out there is still the deadliest strategy you have. —W.B.

A decade and a half ago, I asked a South African professional hunter what he thought of American riflemen. “Bleddy awful,” he said. “They’re afraid of their guns, they’re overscoped, and they won’t take a shot unless they have a bench rest. None of them can shoot offhand.”

How things have changed. When Teddy Roosevelt and ­Ernest Hemingway and Robert Ruark smoked up the bushveld, you shot offhand, period. Now, if you have to shoot on your hind legs, you have a tripod to steady your pulsating muzzle. If you hit an animal, you pay for it, dead or wounded, and since paying for it can run into five figures, tripods are a permanent part of the African scene these days.

It was not ever thus. In the days of muzzleloaders, it was offhand or nothing because it was impossible to reload your gun unless you were standing. Also, the nature of riflery then dictated that you shoot right away or starve, or have your hair lifted. This meant offhand.

What has really put the kibosh on offhand is the craze for tactical shooting, which usually means shooting tiny groups at vast distances. Tactical does not work well on your hind legs. You can’t shoot tiny groups, and you can’t hold a 15X scope steady. A 15-pound rifle tends to weave after a few seconds.

Shooting offhand does not allow you to consult your ballistic calculator, anemometer, drop chart, or Ouija board. Speed is everything. Skilled offhand shooters know that a good fast shot is better than a perfect slow shot because your target is going to move in the next second or two and the slow shot will miss.

I once saw Elmer Keith shoot, and it was, as someone described it, like watching a snake strike. The rifle butt would touch his shoulder and the gun would go off in what seemed to be the same instant. There was fluidity and style and grace to it.

Let us consider grace some more. Prone, sitting, and kneeling do not bespeak the art of the rifleman. What you have is a human lump, and the lump suddenly goes bang.

Tom Selleck, when he was called on to give a shooting exhibition in Quigley Down Under, fired offhand at a bucket that was 400, or 550, or 1,000 yards away (depending on whose internet nonsense you follow). In real life, Mr. Selleck is an accomplished marksman, and he knew perfectly well that Quigley would have shot prone, but there’s no poetry in prone, and it doesn’t make for effective cinema.

It took our genus, Homo erectus, several million years to go from four legs to two, and the least you can do after all that time and trouble is to consider shooting offhand. You may well miss, because it’s difficult. But you’ll look cool doing it. —D.E.P.

4. Leave the Turkey Deke at Home One Morning

I like to see a gobbler slap a plastic jake as much as anyone, but in the timber I’d rather not be tethered to a bag of decoys. I learned to turkey hunt by setting up within gun range of the lip of a ridge, and then shooting the gobbler as soon as he popped into view, looking for the sounds of the hen. There’s still no way I’d rather do it.

There are a few rules to follow when you are hunting ridge turkeys like this, though. First, set up above the birds. I can count on one hand the number of times I’ve set up below a wild turkey in the woods and managed to kill him. You can get away with being on his level, too, but you had best be watching your uphill side. That’s probably where the gobbler will approach from.

There’s an art to positioning yourself relative to the rise, too. In a perfect world, you’re 30 yards away, so that the gobbler is close enough when he appears but doesn’t bust you immediately. But in the real world, you have to be ready to react when he pops up suddenly at 10 yards, because he’ll gobble right on top of you while you’re walking, and there will be nowhere else to sit. You’ll probably hear him in the leaves and maybe drumming just before he appears, and when you do, make any needed movements quietly but deliberately. You might sit there for a good long while, cheek on the stock, knowing you’re about to get a shot but not sure when. I get the chills just writing about it.

When your gobbler makes his appearance, take an extra second to put the bead right on him. Many a hill turkey gets away in the final moments—but you’ll remember those that don’t. —W.B.

5. Run a Mountain Lion with Hounds

There seem to be two high-odds ways to get a good look at a wild mountain lion out West. One is to take an unarmed stroll down a California nature trail, where lion hunting has been outlawed for years. The other is to go to a state where hunting mountain lions is allowed, wait for a good snow, cut a fresh cat track, and then go chasing the critter through the mountains behind a barking pack of hounds.

Most of the time, if it’s a good track, the cat will retreat up a tree, snarl down at the baying dogs, and give you an easy shot. But sometimes the lion skips the trees in favor of a cliffside ledge, where you’ll be deader’n hell if you slip.

That’s the way it went when my wife, Michelle, killed her Colorado mountain lion several years back. Lion hunting was never at the top of my bucket list, but it was hers, and even if I never do it again, I’m damn proud to have seen it once.

One other thing: After you kill your cat, don’t stand there aghast at the odor of cat pee. They taste almost exactly like lean pork. —W.B.

You can call it a man purse, or even a murse, if you want, but me and Indiana Jones know the truth: It’s a satchel.

I swapped my turkey vest for a satchel a few seasons ago, and I’m not looking back. Fact is, I’ve never liked vests. They’re heavy, they snag on fences, and they’re filled with all sorts of crap I never use. And every time a turkey hunt gets good and serious—as in, it’s time to crawl—I shuck them off and leave them behind.

Not my satchel, though. It’s a nondescript thing called a T3 Bolt Bag, and it’s about the size of a nice Louis Vuitton. It holds all of the essential gear that I need for a hunt, and I can crawl or run with it. Plus, the lack of a cushion connects me with nature in ways a turkey vest never did. —W.B.