Kyle Dulek set out to win his group’s biggest-doe contest. Instead, he tagged one of the biggest non-typical whitetail bucks of the year 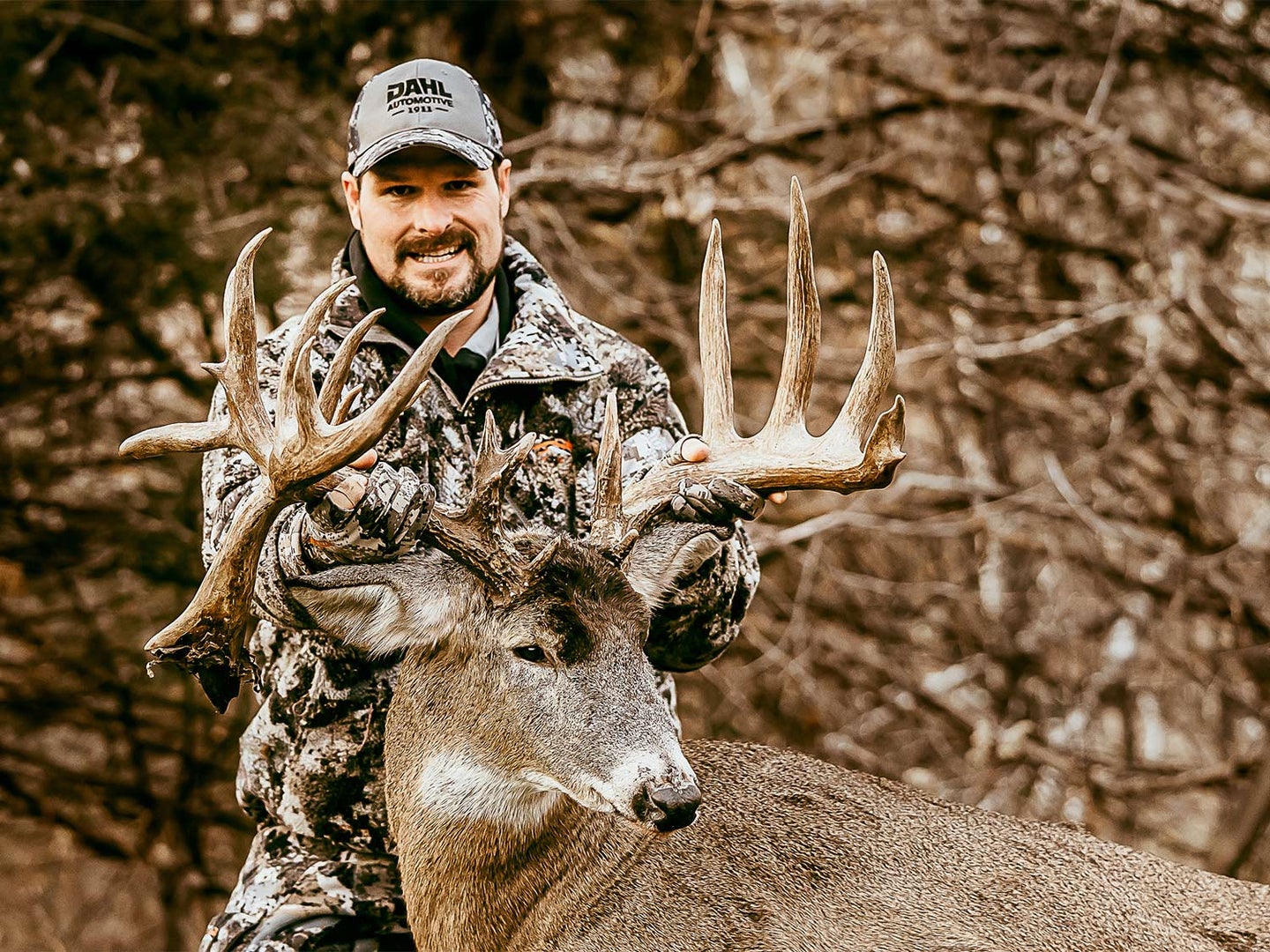 Kyle Dulek didn’t set out to tag one of the biggest bucks taken in Minnesota last fall. In fact, his sights were aimed a whole lot lower: “I was just hoping to win the biggest-doe contest that my hunting group was holding,” Dulek says. On December 6, he headed to a stand he’d hunted only once all fall, toting a muzzleloader he won at a sportsman’s banquet—a gun he had never shot a deer with before. Before that afternoon was over, he would put a tag on a 25-point, 227-4/8-inch buck of a lifetime. Here’s his story.

Dulek’s huge non-typical was a buck that he’d hunted before, on his family’s hunting property in southeastern Minnesota. “I had one pic of that buck in 2018, and he looked huge even then,” he says. “The next fall, the 2019 season, I had a lot of pics of him in the summer and early fall. I went after him pretty hard, and it seemed he was hanging near a thick bedding point on our property. I hung a stand in that spot, and sat it several times. Still, I never saw him.”

As the 2020 season opened, Dulek didn’t hold a lot of hope for an encounter with the giant buck. “Not only had I chased the buck hard the previous year and come up short, I didn’t have as many pics of him,” he says. “I knew the buck was still around, but I felt like I might have sat that one stand a little much the year before.”

Dulek decided to back off the bedding-point stand and hunt other spots. Sure enough, it paid off. “I went out during our first gun season and on opening morning I shot the biggest buck of my life, a 165-class 11-point that I didn’t even know existed.” In the CWD Zone where Dulek hunts, the state has relaxed the usual one-buck rule, which meant that Dulek had another buck tag in his pocket when the second gun season came around during the week of Thanksgiving. “During that hunt I was lucky enough to finally meet up with an old buck I’d actually been after for a while. He was a 140-inch 10 that I knew pretty well.”

With two great bucks in the bag, Dulek was perfectly content to pursue another milestone—winning the biggest-doe contest that was an annual rite among his hunting party. “I went out and bought an either-sex tag for our muzzleloader season,” he says. “On Dec. 6, I decided to head out to that bedding-point stand where I’d hunted the big non-typ the season before. I left about 2:30 in the afternoon, so I could take my time getting to the stand. I busted some deer on the walk in, but just decided I was going to get to the stand and hunt it.”

About 4:00 pm, an hour before dark, Dulek watched a small doe work her way toward his stand. “She was in front of me for a really long time,” he says. “I knew she wasn’t going to win the big-doe contest, so I decided to just hang in there.” Before long, he heard a deer coming in from behind and turned slowly to look. “Finally I could see him at about 80 yards, where he started to work a scrape. At that point I didn’t know anything except that it was a buck.”

After minutes of patient glassing, Dulek finally realized he was looking at a good buck. “I could only see one side, but that was enough to tell me he was a great deer,” he says. “When the buck gave me a good shot, I took it.”

As the smoke cleared, Dulek still had no idea that he’d just shot the big non-typical that he’d hunted so hard the year before. But when he finally walked up to the giant buck, there was no doubt what he was looking at. “He had a fairly clean typical side with seven points,” Dulek says. “But the other side had 18 points and stuff going everywhere. He had triple brows, drop tines, and a flyer point.” The huge buck had 25 scorable points and a final net score of 227-4/8″. “He was just an amazing old buck.”

Dulek’s buck was at least 7½ years old. “He had a long nose and big frame, but he sure didn’t weigh very much,” he says. “I’m sure he was rutted out from over a month of breeding. It’s just something to be able to kill a deer not only that big, but that old. Not many live that long in this country. I guess one neighbor had him at 70 yards once, but couldn’t get a shot. It’s quite an honor to be the guy lucky enough to get him.”