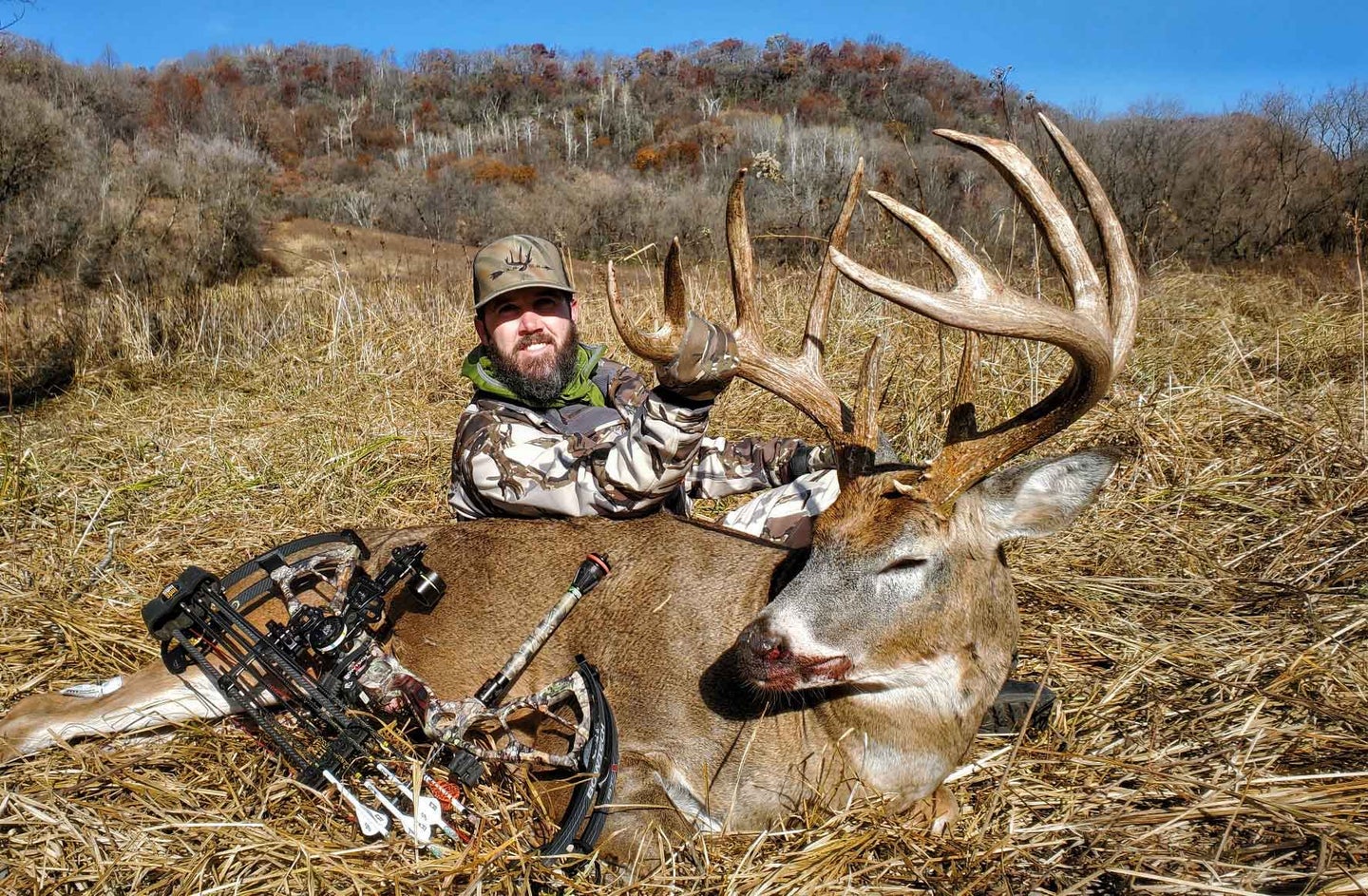 Some guys come up with clever or flashy nicknames for a hit-list whitetail, but Brett Schmit just called his dream buck “Mr. Big.” He realized that the name was a little understated when he put his hands on the buck on Halloween Day. “I’d seen him twice and looked at a bunch of pictures,” Schmit says. “But when I walked up to him, it was kind of unbelievable. Mass, tine length… everything was just bigger than I was prepared for.”

Schmit was right to be wowed. The huge-framed 10-point grossed 194 B&C as a typical. Schmit estimates that there are 7 to 8 inches of deductions. If that score holds up, his buck will easily rank in the top 10 typical bowkills ever taken in Minnesota, and it will certainly be one of the top archery typical whitetails in the country this fall.

The hunt for Mr. Big actually started four years ago, says Schmit. “In 2017, he was a 140-class 10-point, so not the biggest buck in the world, but he was the biggest buck on my farm that year. So he had my attention. I had a few pics of him, and I actually saw him once from stand in late November. He was with a doe in some CRP and was tending her long after the breeding peak. I didn’t know it then, but that would be the last time I’d see him a while.”

In fact, Schmit would go another two years before actually laying eyes on Mr. Big again. But he did get trail-camera photos in the meantime, and the buck made big jumps in antler growth. I wouldn’t get any pics of him in summer, or even early season, when most other bucks were pretty visible. He wouldn’t show up on my cameras until late September or October, when he’d hit some scrapes. Then he’s seem to disappear again during the rut, but that’s not unusual for any buck. They just get harder to get pics of when all they care about is finding does.”

The lack of summer and early-fall pictures convinced Schmit that he didn’t know where Mr. Big’s core area was, and if he wanted to kill this buck, he needed to find it. “Going into the 2020 season I just got really aggressive with camera placement, and I moved cameras around a lot, looking for clues about where this buck lived. I own 20 trail cameras, and I’d say 12 or 13 of them were devoted to finding him.”

Schmit’s camera work paid off, in a classic good-news-bad-news scenario. “I finally pinpointed where this buck was spending 90 percent of his life, and of course that was great. But I knew that if I sat the area I just wasn’t going to see many, if any, deer. He was living on basically 20 acres—a chunk of thick cover bordered on one side by a cattle pasture and the other by CRP. It was just one of those spots that isn’t that attractive to most deer. But it was his safe space, and I knew if I was going to see him in daylight that’s where it had to happen. I hung a stand or two and got ready to get skunked.”

Schmit takes time off from work to bowhunt the Minnesota whitetail rut each fall. “I started the last week of October, and of course I was focused on Mr. Big,” he says. “And I won’t lie, it was boring. I was putting in long days and it was cold and I not only wasn’t seeing much, I wasn’t seeing him.” All that changed on Halloween, when Schmit arrived at his tree stand, settled in, and looked up to see the huge buck standing in the CRP below him.

Since the buck wasn’t heading his way, Schmit swung into action. “I grunted and it was too windy for him to hear it,” he says. “So I grabbed my rattling antlers and hit them. He stopped in his tracks and turned to look my way. I remember thinking, Here we go, and then I caught movement out of the corner of my eye. It was a mature 9-point, and he was coming between me and Mr. Big as he charged in to the rattling.” Schmit’s heart sank. He was sure this buck was going to circle downwind, bust him, and alert the bigger deer. “I got lucky. Although 9-point never busted me, he was suspicious, but for some reason he slipped out behind me, and Mr. Big never saw him.”

As soon as it was safe, Schmit rattled again. “Mr. Big didn’t hesitate for a second this time,” he says. “The second he heard those antlers, he was on his way, and I grabbed my bow and started looking for an opening where I could shoot. Naturally, the buck went into thicker cover, but I saw a small opening where I thought I could get an arrow through. When I grunted, he stopped with just his vitals in that hole, and I made the shot. While the shot looked good, I waited for a long time before I even got out of the stand. Then I went home and called a couple buddies to help me track him.”

Schmit and his tracking crew took up the trail and found the buck. “It was pretty amazing, actually,” he says. “I hit both lungs and clipped the heart, and that buck still made it 400 yards through the CRP. It just shows you how tough these old deer really are. Weeks later, Schmit says he still can’t believe some of it. “For one thing, just getting a buck to live that long in my area is pretty incredible. And to finally figure him out and for everything to come together like that is hard to wrap my mind around. And for him to be that huge—even bigger than I expected—is like a dream to me.”