How make a camp album, pass the torch, and pull off a great prank 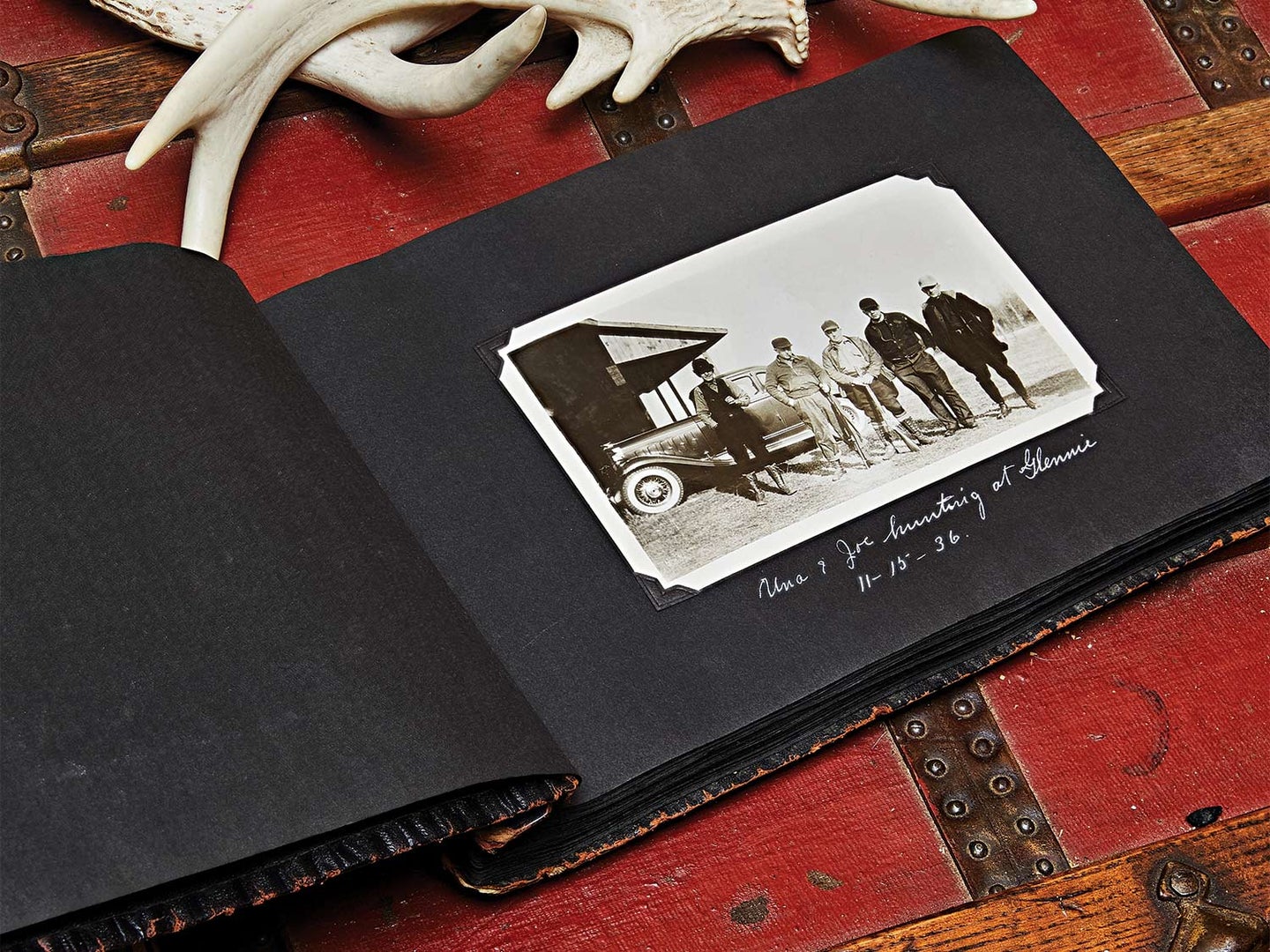 A photo album of vintage photographs on a chest with deer antlers. Ralph Smith
SHARE

It’a a given: Spend enough time at hunting camp, year after year, and traditions will follow. They may come in the form of a night-before-opening-day toast, a celebratory bonfire on the last evening of camp, family meals, or even a homemade photo album. Ultimately, the best things about traditions are the memories they spark—which means the spirit of hunting can burn all year long.

We have cloud storage and AirDrop for saving and sharing photos by the thousands. But it’s the same few dozen pictures that we printed and keep arranged in albums that get the most attention from hunters in our camp every year. My wife, Michelle, had the idea for the albums, and she makes new ones each year with highlights of the season. It’s a lot more work than posting pics on Instagram. You need to download the photos, have them printed, and then organize them. All that ­picture-taking and effort used to bother me. But sometimes I’ll pick up an album in the bunk room and see a picture of Michelle’s first deer—taken 20 years ago, back when we were just dating. In another volume, there’s a picture of our son from just a few years ago, holding up a pair of squirrels that I’d shot. Anse was 2 years old then, still in diapers, and it was the first time I’d ever taken him hunting with me. There are pictures of other critters from different days, all of them with friends and family—some no longer with us—and all doing their part to keep memories alive that would otherwise be lost in some digital file. Plus, a screen just gets in the way of proper reminiscing.

So I don’t get aggravated by the photo album process anymore. Instead, I’ll look forward to seeing the photographs that Michelle decides to include from this year. The way I figure it, if not for the memories, what’s even the use of having a hunt camp? —Will Brantley

Dibs on the Hangover Blind

We put up a pop-up ground blind 75 yards from the cabin. To get to it, you stroll across the mowed lawn and down a short trail through the woods. You could sleep till the break of dawn and still make it into the blind on time. My brother, Matt, dubbed it the Hangover Blind, because when you’ve put more effort into the night before than you’re willing to put into the day ahead, it’s just the place to go.

The Hangover Blind overlooks an acre and a half of ladino clover that’s surrounded by thickets, and you can get into it undetected. It’s a good spot. We’d all rather nurse a blistering headache in a lock-on stand than admit to needing it too. Maybe that’s why, right up to the very moment I’m writing this, the Hangover Blind is the only place on our farm with a success rate of 100 percent. Everyone who’s ever hunted it has killed a deer. —W.B.

Camp is often full of hallowed traditions, most of which make no sense. Cutting off a shirttail has never improved anyone’s shooting, for one. What you need to do is come up with your own traditions. A fun game is to invite the local C.O. in for a cup of coffee and have camp members play Pin the Tail on the Warden, using tape, of course. Use of a pin constitutes assault. Empathetic origami is another crowd-pleaser and good for new members who seem unsure of themselves. Have each person write down their worries on a piece of paper. Then guide them through an origami exercise to turn the paper into a butterfly. Each person flies their butterfly out of an open window to symbolize letting go of their worries, at which point everyone should feel comfortable revealing their most humiliating secret to the rest of the camp. —B.H.

Sporting traditions come in all forms. Once upon a time, the members of a whitetail deer hunting club in Michigan’s ­Upper Peninsula invited a tenderfoot to their camp. Before the hunters set him out on a stand, they warned the newcomer not to stray, that the country was featureless, so he would get lost. But stray he did, and got good and lost, and when the realization hit him, he shit himself.

He tore off his long-john bottoms and threw them over a pine tree branch, then blundered onward. By sheer luck, he got a ride back to camp, but the long johns stayed where they were and became a landmark, then a rallying point, and eventually a tradition.

I’ll meet you at the tree where _____ hung his long johns after he shit himself.

And after the tree had grown to maturity and had itself been cut and hauled away: I’ll meet you where the long johns tree used to be.

Most traditions are somewhat more noble. The composer Gustav Mahler said: “Tradition is not to preserve the ashes, but to pass on the flame.” By creating and observing traditions, we don’t worship a past that is dead and gone; we select what has proved to be of worth to us, and we carry it forward.

Hunters and fishermen deal in life and death; this lends an element of gravity to our traditions. One of the most consistent of these is honoring what we kill. In Sweden, after a hunt on the estate of a count, I attended a formal dinner at which there were toasts made to the hunters and to the animals. In Germany, where I participated in a mixed-bag hunt, in the bitter cold of evening, all the creatures were laid in ranks in order of importance and, by torchlight, a service was read for them.

I’ve seen African trackers throw a handful of dust on the hooves of fallen animals and mutter a little prayer. Native Americans commonly thanked what they killed for giving up their lives. These expressions of awe, gratitude, and regret are probably as old and as universal as hunting itself.

Some traditions are meant to make a point. In South Carolina, I hunted for years with a group of a dozen men and women who made whoever shot the smallest deer President of the Baby Doe Club. That was an office that no one wanted, and it was also a sharp reminder that here, where all the deer were on the small side, you were advised to keep your finger off the trigger until you were sure of what you were shooting at.

Earlier, I quoted a real-life German composer, so I’ll conclude with a fictional Russian peasant named Tevye who said: “How do we keep our balance? That I can tell you in one word: Tradition.”

In these unbalanced times, we will do well to honor our traditions, whatever they may be. —David E. Petzal

Keep Everybody on Edge

I was at a mule deer camp a few years back that had a life-size statue of a bucking rodeo bull. The rule was simple: You miss a deer, you ride the bull. The statue towered just outside the front door, and a photo parade of sheepish-looking riders in camo lined the walls inside.

When one of the guys in our group rode the Bronze Brahman for the third time in two days, we all lined up to take photos, again. It actually wasn’t that funny in the moment—but it sure as hell is funny now. He eventually got his buck, his biggest ever, but we all still laugh about the misses.

That’s why you need a Wall of Shame at camp—to have a dedicated place where your failures can live forever. Stories of triumph are nice, but they’re not half as entertaining as boneheaded moves and epic screwups. And the sting of shame only lasts a little time.

Half the reason we come to camp is to give each other trouble, which is maybe a little juvenile on one hand. But a good Wall of Shame codifies and enshrines the b.s. It humbles every­one eventually and elevates mere ribbing into camp lore. Plus, when you’re making fun of someone, it helps to be able to point and be specific.

A tradition like this can keep guys on their game too. I know of a New York whitetail camp where if you miss a deer, you must shave off half of something—a mustache or a beard or whatever isn’t already shorn. Then you get your picture taken for the wall. Everyone in that camp can ­really shoot, and all of them—even the ones who go clean-shaven the rest of the year—show up with plenty of ­facial hair. —D.H.