The author looks through his best shots from the past few seasons, and shares some tips on using trail cameras to pattern and hunt big whitetail deer 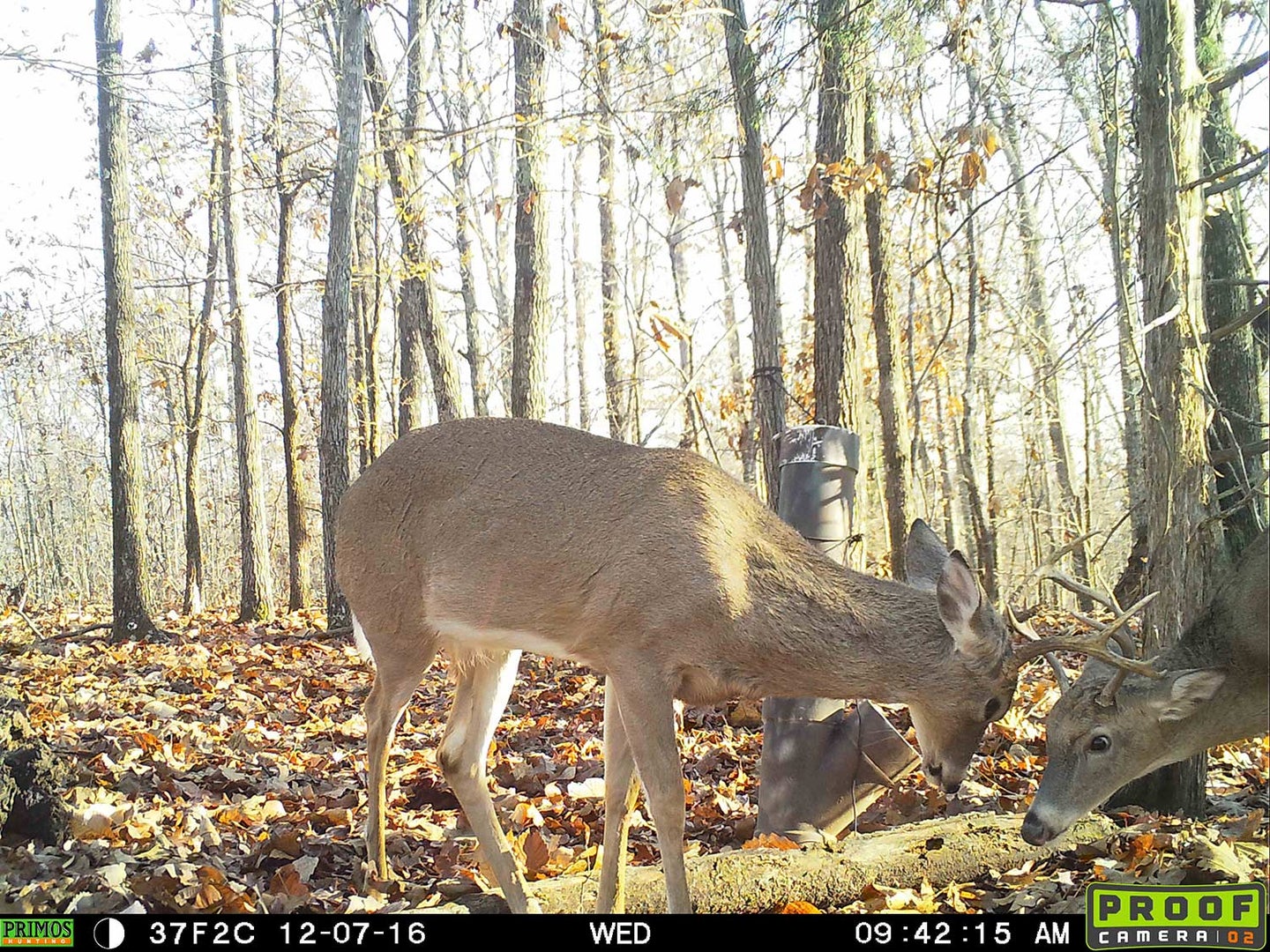 Two young bucks have at it. Will Brantley
SHARE

Today’s deer hunters are better than any before them at tagging big whitetail bucks, and trail cameras are a big reason why. They’ve given modern hunters more insight into deer behavior, which has allowed us to adapt our strategies accordingly—not just in one week or one season, but over time. And, maybe more than we’d like to admit, trail cameras have helped us practice restraint. It’s easier to pass on a little buck when you have pictures of a bigger one running around.

Trail cameras aren’t perfect. Sometimes they spook deer. Sometimes we’re too reliant on them. And sometimes—like when we have 500 photos of a buck but a neighbor shoots him—they can bring out the worst in deer hunters. But overall, trail cameras are a good thing that I enjoy, and from June to January, I have 15 to 20 of them keeping tabs on farms that I hunt myself, and where we guide other hunters. I sort through thousands of photos every week of deer season. Here’s a look at some of my favorites from the past few years.

On occasion—rarer than you’d think by watching outdoor television—trail cameras allow us to closely follow and pattern a single buck for an entire year. This whitetail first appeared on our cameras in the late season of 2019. Firearm season had just ended, and the buck was obviously wounded (though I’ve always thought that wound looked more like a broadhead mark than a bullet mark).

Whatever hurt him, the buck bellied right up to a corn pile, healed fast, and then stuck around all summer, eating in our food plots and at our feeders. By early September, you could barely tell he had a scar. One of the hunters we guided during opening week of bow season had a close call with this deer, and nearly got a shot. After that hunt ended, my wife, Michelle, sat in that stand for two evenings, and shot the buck with a crossbow at 25 yards. There was a slight scar on the buck’s hide, but two solid handfuls of scar tissue around the wound underneath. Still, Michelle said, the buck had no limp, and no obvious signs of injury. He was one of several bucks in a bachelor group and despite having the largest antlers by a good margin, he was relaxed, chill, and even submissive to some of the rowdier, younger bucks. Seeing this buck shot was bittersweet.

Read Next: The Best Trail Cameras of 2020

Trail cameras are always watching—even when you’re not there. We even use them for home security. But the candid stuff trail cameras capture in the woods is way more fun than seeing photos of the UPS guy. I have no idea, for example, where these two escaped black mules came from on that first day of October in 2018. I never saw them again, either on camera or out hunting, and so I assume they made it home.

We’ve gotten multiple photos of that pair of gray foxes on our farm over the years, but this one is the best daylight shot. As for the coyote below, he walked through a hardwoods pinch point, past a camera that I’d left out and forgotten during the rut. We don’t get much snow around here but when we do, it gets critters moving.

It’s easier to get photos of good bucks early in the season than at any other time of year, but think beyond the corn piles. I like to put cameras over water holes, and on the edges of bedding areas and crop fields. I might leave them out for a month between checks. You won’t get those cards brimming with two thousand pictures like you would over bait, but you might get neat stuff like this—such as a buck that’s shedding his velvet and taking a drink, a bachelor group in a hayfield backlit by a sunset, and bucks sleeping.

On long-term camera sets like this, angle your lenses north or south when possible to avoid flares that can trigger the camera and wash out images at the best times of day.

Read Next: 13 Pro Tips for Getting Better Trail Camera Pictures

This year, we were headed to camp on the eve of the gun opener when a doe came crashing out of the woods and ran across the road, right in front of the truck. I stopped, and from the back seat my 6-year-old son said, “Daddy, that one’s in buck mode.” Sure enough, a little forkhorn ran across the road a few minutes later.

We’ve called it “buck mode” all year, but most of us know it as the rut, and there’s simply no better time to be in the deer woods. If you can’t hunt, at least have some cameras out, because you’ll get some awesome pictures. My trail camera strategy during the rut is to blanket the farms I’m planning to hunt with several cams (four or five per 100 acres). I put some of them on scrape lines to inventory bucks around Halloween through early November (see the two images above), but most of them go in travel corridors near doe bedding areas (like the three shots below). Others go on the edges of major food sources where we caught those two dandy bucks posturing on November 11.

For hunting purposes, I check rut cameras often, and I’m as interested in knowing where there’s daylight doe activity as I am buck activity. Often, if I’m putting a cam near a bedding area, I’ll pour out some shelled corn, which is legal here in Kentucky. Does that are tired of being harassed on major food sources usually can’t resist stopping by for a bite of golden delicious, and they’ll drag bucks right in with them.

I use trail cameras in the spring to monitor for strutters on food plots, but you can get cool bird photos year-around. The red-shouldered hawk in the shot above seems to be nabbing a breakfast critter from atop my gravity feeder.

The time stamp in the photo above is obviously wrong—we don’t have velvet bucks and greenery here in February—but it’s a late-summer pic of a couple yearlings running a mob of crows off a corn pile. One of the crows nearly smashed into the trail camera I had affixed to a 4×4 post in the field.

Sometimes a trail camera photo can tell a full story, if you look at the context of the moment. Here are some of the craziest stories my trail cams have captured in recent years:

This shot was taken on the night of July 11, when a lot of folks in the Kentucky Lake area still had fireworks left to shoot and must have been tired of being stuck inside in 2020. I don’t know what the odds of catching a firework and feeding buck in the same shot are, but I haven’t done it before or since.

This is probably the clearest photo of two sparring bucks that I’ve ever gotten. It was taken late in the season, when the rut was mostly over, but that didn’t seem to matter to this pair of young bucks. That guy on the right looks mad as hell.

I captured this shot recently. Most adult does will run button buck fawns off, starting as early as mid-October. Those young bucks usually disperse to new territories all together. It’s nature’s way of keeping a robust gene pool. But button bucks don’t always leave, and it can cause problems. See Exhibit A. Seems there should be a Norman Bates joke in here somewhere…

This is my favorite trail camera photo of all time. It was taken in October of 2019, and you can see Michelle in her stand, looking that buck over carefully. She passed on that deer—but the ancient 9-pointer that followed the same trail out a half-hour later wasn’t so lucky. He didn’t quite make it in front of the camera before Mish heart-shot him with her crossbow.